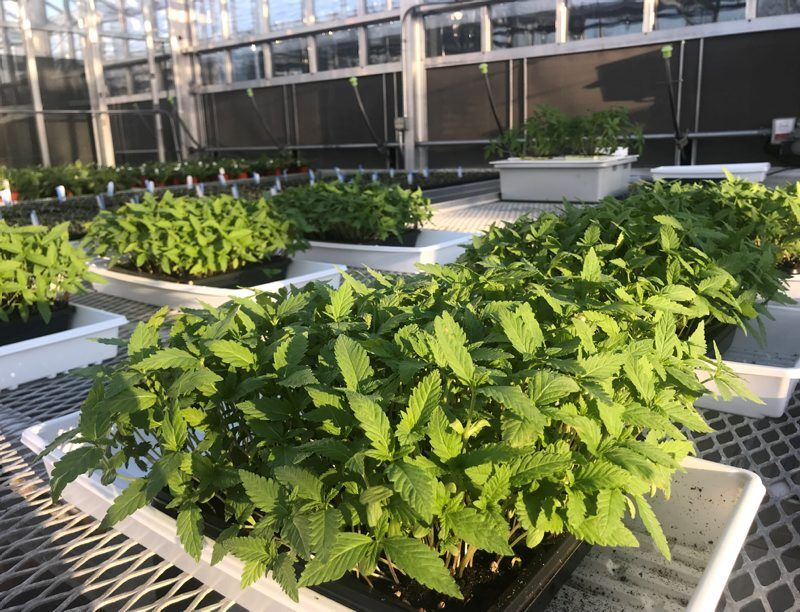 Baby hemp has a promising future as a microgreen, making it a potentially high-value niche crop for greenhouse growers.

Baby hemp greens are harvested at the third true-leaf stage, and cut off at the cotyledon.

Microgreens are becoming a macrobusiness for entrepreneurial growers who can target restaurants, farm markets and other retail food outlets, as well as home cooks.

Tiny shoots of beets, spinach, radish, cress, peas and other greens can be grown year-round in high tunnels, barns, basements, etc., harvested in a week or two, and re-seeded for the next crop.

Some New York hemp farmers have started growing baby hemp plants for salad greens, and have been meeting with some success, Neil Mattson told a webinar audience during the 2021 Mid-Atlantic Fruit and Vegetable Convention in February.

Mattson is an associate professor of horticulture at Cornell University, and a greenhouse Extension educator.

He said he heard about farmers enrolled in New York’s hemp program who were harvesting baby plants for sale as microgreens. With help from his graduate students, he launched a seed-to-taste test study that investigated every aspect of producing a baby leaf hemp crop for market.

Though commercial hemp farming was legalized in the 2018 Farm Bill, growers will still need a state-issued permit to grow hemp or buy hemp seeds.

Nine cultivars were involved in the research, some dual-purpose grain and fiber varieties, others just for grain production. Mattson didn’t test cultivars bred for CBD content.

The plants were grown in 10-by-20-inch flats in a well-drained soilless substrate, mostly a blend of coconut coir and peat moss. The substrate was 2 inches deep, with another half-inch to cover the seeds. The temperature was controlled at 70-74 degrees.

Because the sprouts quickly developed a tight canopy, overhead watering wasn’t an option, Mattson said. The plants were watered from below, but if the roots stayed wet for too long, phytophthora became a problem.

Germination typically took two to four days, and the greens were ready to harvest in 13 to 18 days. They were harvested at the third true-leaf stage and cut off at the cotyledon.

The dual-purpose varieties in the study were Anka, Ferimon, Wojko, Canada and Joey. The grain varieties were USO-31, Katani, X-59 and Picolo.

Mattson also wanted to know an optimal number for seeds per flat. To find out, he used the dual-purpose Ferimon and Katani, a grain variety.

Seeds were distributed evenly in the flats, roughly at rates of 840 to 3,675 per flat. The flats that performed best got 3,000 seeds each.

Above that seeding rate, yields plateaued and diseases took off.

In another project, Mattson found that small seeds germinated poorly and did not produce marketable plants.

Hemp seed vendors do not typically size their seed because CBD and fiber producers aren’t too concerned about it.

But a salad hemp grower who buys enough seed might be able to work a deal with a supplier to sort out the small seeds, Mattson said.

Picolo, the cultivar used for the fertilizer part of the study, responded well to a 21-5-20 conventional fertilizer, delivering 2.5 times the yield of a control with no fertilizer. The best organic fertilizer result was about one-third less than with the conventional product.

Mattson said baby leaf hemp might be a good addition to a mixed green salad. But in a sensory analysis in which panelists compared hemp greens on their own to baby versions of spinach, butter lettuce, romaine, kale and arugula, hemp did not appear to fare too well.

In a chart of the panelists’ impressions, the nine baby hemp varieties landed on the negative side, while the five other baby greens were solidly in positive territory. Panelists reported hemp as having a hairy, fuzzy texture; an herbal, floral or aromatic taste; and slightly sharp flavor.

One takeaway from Mattson’s presentation is that the future of baby hemp as a salad green is a bit fuzzy.

Two Pennsylvania state senators discuss their bill to legalize recreational marijuana and how it would affect hemp farmers.

Meet the Cherry Ember, a new breed of tomato making its debut on the market this year.