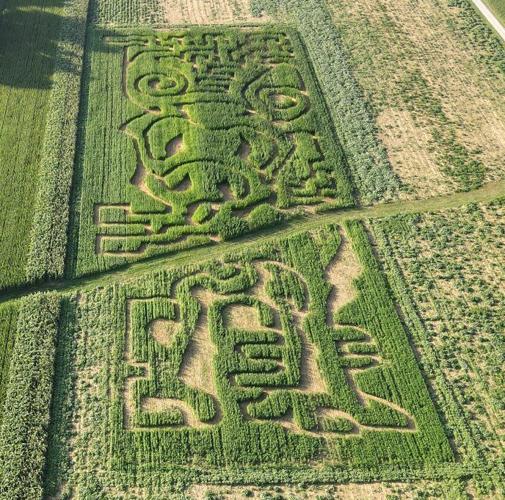 One of the few ways to see the maze in its entirety is by drone. 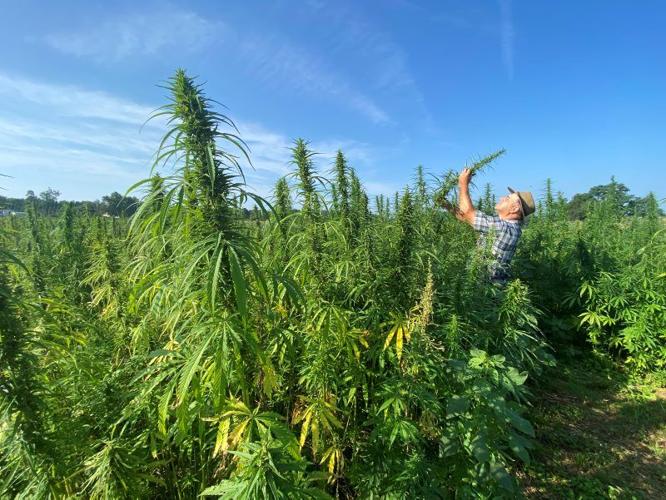 Hemp farmer Steve Groff inspects one of the fiber hemp plants in the hemp maze at CedarMeadow farm in Holtwood. The maze opens to the public Sept. 4. 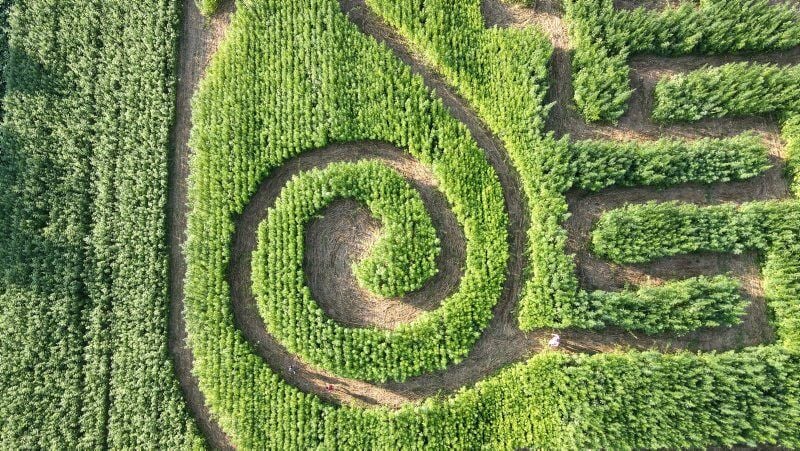 A close-up ariel view of the hemp maze, which was planted densly at 60-70 pounds of seed per acre. 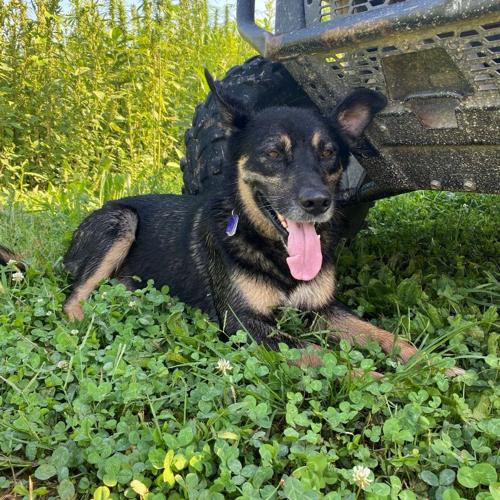 How do you explain to farm dog Grizzly that his likeness is cut into a field of hemp? 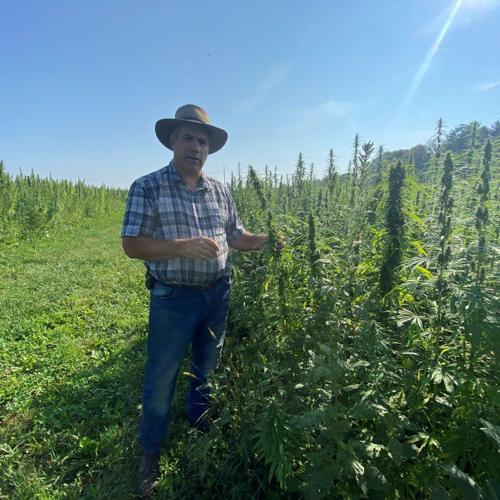 Steve Groff's mission with the his hemp maze is to educate the public and normalize the crop.

One of the few ways to see the maze in its entirety is by drone.

A close-up ariel view of the hemp maze, which was planted densly at 60-70 pounds of seed per acre.

HOLTWOOD, Pa. — Corn mazes have become a reliable way for farmers to connect with and educate the public about agriculture while also adding to the farm’s bottom line.

The 4-acre fiber hemp labyrinth sits along the farm lane at his Cedar Meadow Farm in Holtwood, Lancaster County, and is set to open to the public next Saturday, Sept. 4.

Groff’s been a leader in local and national agriculture for years, pioneering the Tillage Radish and singing the gospel of no-till farming.

When the 2018 Farm Bill brought industrial hemp back to the farming landscape of Pennsylvania, he jumped into hemp wholeheartedly and hasn’t looked back.

From Cover Crop Coaching to Hemp Innovators, the thread that links all of his farming endeavors is education. And that’s exactly what he hopes to provide with his new hemp maze — and maybe a little promotion for his recently launched line of CBD products.

“That’s really what’s behind the maze,” Groff said. “We have all this lack of education from the general public. They just don’t know” the various beneficial uses of hemp.

“Consumers need to be aware of it, so they can begin to ask for it,” Groff said. “With all these hundreds if not thousands of products that could be made with hemp — a renewable resource, by the way, and one that farmers could benefit from if we can get this infrastructure up and running.”

To that end, Groff will have education stations throughout the maze to help educate the public.

The maze was designed and implemented by the York County-based company Maize Quest.

While this was the company’s first hemp project, Maize Quest’s maze master Hugh McPherson said that making a hemp maze is just like making any other kind of maze.

Besides the familiar corn mazes, Maize Quest has worked with various crops over its 23-year history, including bamboo, sudangrass, soybeans, sorghum, sunflowers and hedges.

McPherson said he was not surprised by Groff’s desire to build a hemp maze. He’s known Groff for years and has attended past hemp events at Cedar Meadow Farm.

The design of the hemp maze was based on the logo of the Cedar Meadow Farm CBD brand — a stylized image of Groff’s dog, Grizzly. That image was then superimposed onto the field using GPS.

Once the field is marked, the Maize Quest team would normally rototill the pathways.

Groff’s commitment to no-till precluded disturbing the soil, so the paths were cut using a BCS walk-behind sickle bar mower. A standard deck mower would have gotten bound up quickly due to the stringy, rope-like nature of the hemp stalks.

Before moving ahead with his plan for a maze, Groff checked with his township on any special zoning considerations and was eventually given the green light. “I live in a township that is very rural and very agricultural, so that’s in my favor,” Groff said.

“Insurance can be a big thing,” he said. “I checked with my insurance company, and of course I’m going to have to up my premium to cover this event, but it was actually reasonable.”

Maize Quest consults with farmers on how to navigate the ins and outs of hosting on-farm agritourism events.

Groff has been growing CBD hemp at his farm since 2019, but the variety he planted for the maze is a fiber variety called Bialobrzeskie that grows much taller than CBD varieties.

Groff sourced the seed from King’s AgriSeeds and planted it very densely — 60 to 70 pounds per acre. “We didn’t skimp on seed because we wanted it thick for the maze,” Groff said.

Groff intends to cut, ret, and bale the maze at the end of the season and sell the crop to a processor.

Besides the maze, the farm will be offering pick-your-own pumpkins, sunflower photo opportunities, hayrides, bison feeding, baked goods and more.

The maze opens Sept. 4 and will be open weekends through the end of October. Advance tickets can be purchased at cedarmeadowadventures.com.

Listen to the full interview with Steve Groff on the Industrial Hemp Podcast:

The team at Fair Haven Farms is busy preparing for special events taking place this fall during its annual Fall Festival.

Penn State’s Landisville research farm hosted a field walk Monday evening to show off its hemp research, which is part of the Multistate Variety Trial, a partnership of land-grant universities around the country.

This is the final episode from Lancaster Farming's National Hemp Tour. Hemp podcast host Eric Hurlock visits with the folks from DON Enterprises to check out the hempcrete home under construction there.

On this week's podcast, we talk to Lancaster County farmer Steve Groff about his new one-of-a-kind Hemp Maze at Cedar Meadow farm in Holtwood, Pennsylvania.

Risser-Marvel Farm Market is one of 15 roadside farm stands to make a VisitPA list of places to visit in the fall.

How to successfully grow both CBD and fiber-type while using cover crops and no-till.

The Case of the Mystical Maze