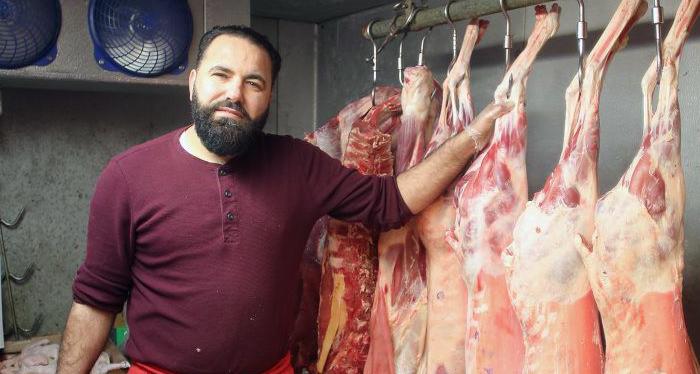 Ali, a native of Palestine, is the owner and butcher at Al-Amana, a Halal meat market, in Northeast Philadelphia. 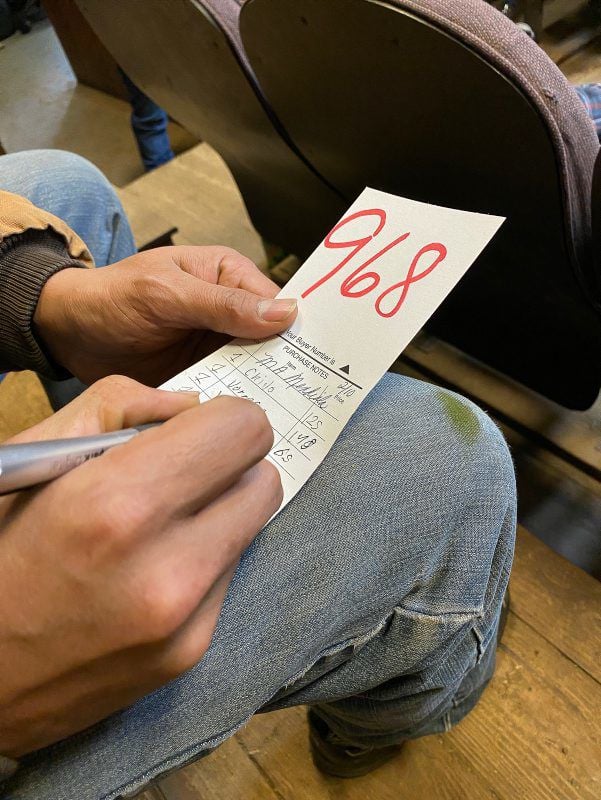 A goat bidder marks his card with his goat and sheep purchases at the New Holland Sales Stable. 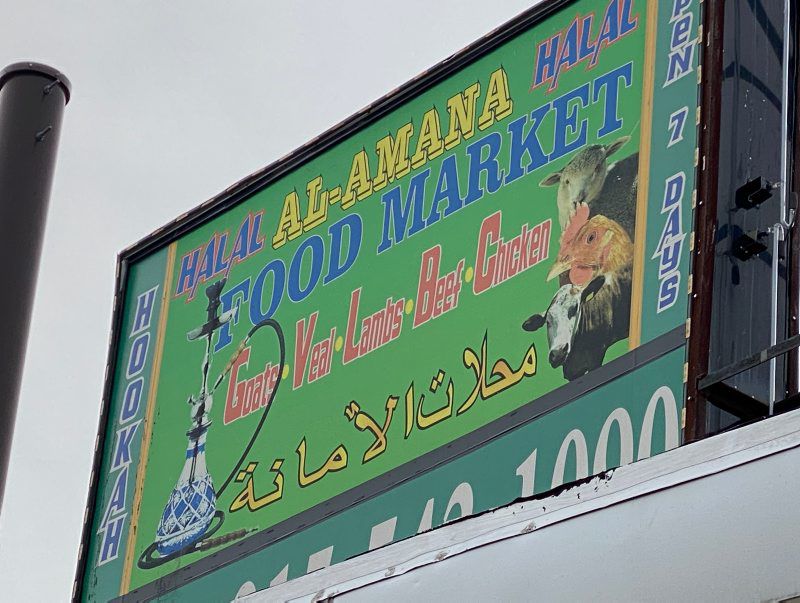 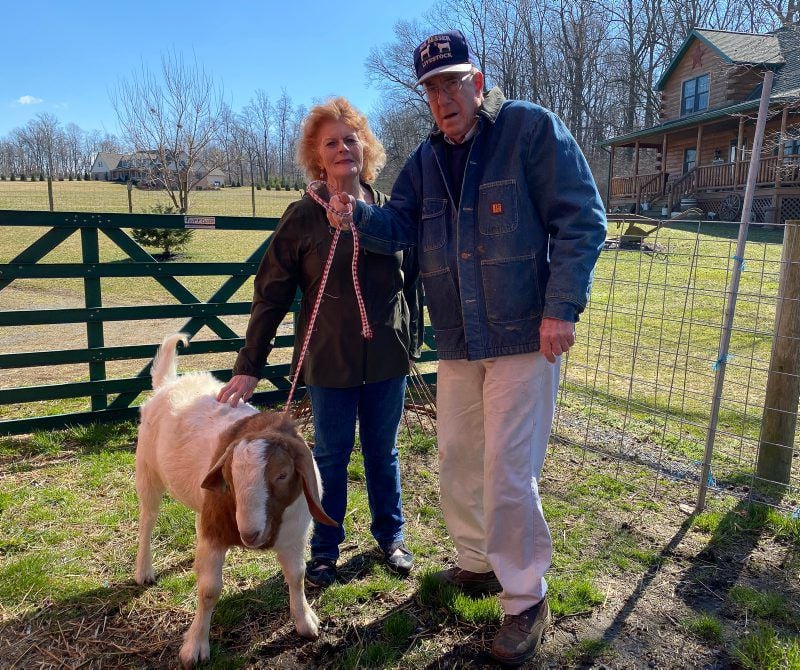 Dr. Robert Herr and wife Amelia with one of their pedigree Boer goats at their Narvon, PA farm. 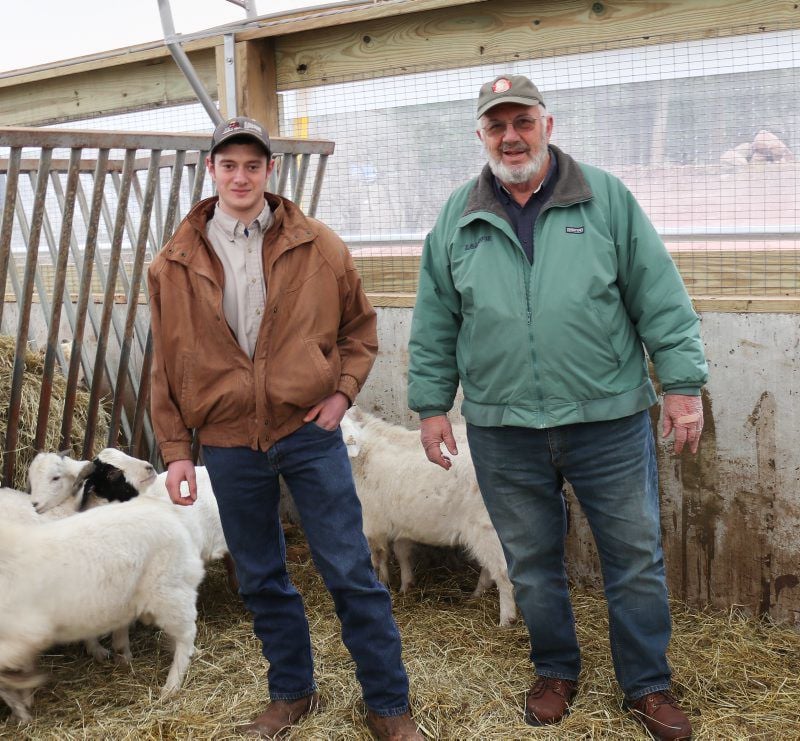 Samuel Stoltzfus, Kingdom Livestock, and Abe Fisher, a livestock field rep, are part of the goat growers program started in 2018 to increase the availability of live goat to the ethnic meat marketplace. 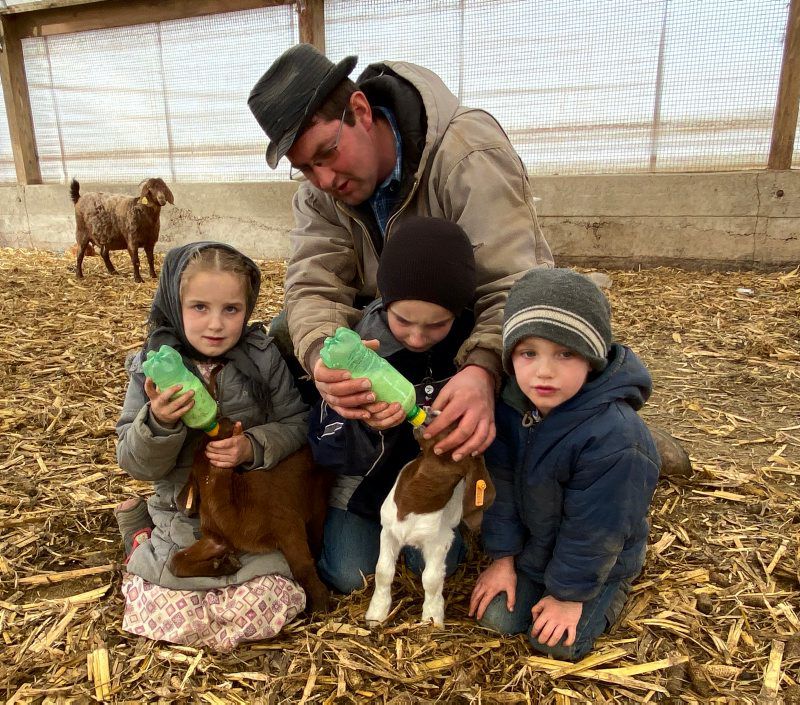 Irvin Stauffer, one of the initial members of the goat growers program, helps his children feed baby kid goats that have been rejected by their mothers at their New Holland, PA, farm.

Ali, a native of Palestine, is the owner and butcher at Al-Amana, a Halal meat market, in Northeast Philadelphia.

A goat bidder marks his card with his goat and sheep purchases at the New Holland Sales Stable.

Meat markets for goats and sheep are on the rise.

Both have been farm animals for millennia and were the first livestock raised for human consumption. Today, they are consumed by 60% of the world’s population. In the United States, however, families occasionally eat lamb and probably have not tried goat, which is generally not available in the supermarket meat case.

In the U.S. food industry, goats and sheep are called ethnic meats, and sales have been growing.

Some 3 million goats and 5 million sheep — valued at $1 billion — are raised in the U.S. each year. Much of that business passes through the New Holland Sales Stables in Lancaster County, Pennsylvania, two days each week on the way to ethnic retail markets in New York, New Jersey, Rhode Island and Massachusetts.

The shouts of enthusiastic bidders echoing through the sales stables is a familiar sound on busy Mondays. But when nationwide COVID-19 concerns heightened earlier this spring, as the Western and Greek Easter season approached, there was a drop in auction sales during what is usually the busiest time of the year.

The Monday before Easter, about 1,500 goats and sheep were auctioned. During a regular Easter week, that number could be doubled, or more.

Steve Manieri is a meat processor whose family has owned a USDA/halal facility in Bechtelsville, Pennsylvania, since 1975. He said his ethnic meat sales have been growing, but the coronavirus has stalled the pace. Although pre-orders for Easter were high, many were canceled because big family celebrations were canceled. He had his fingers crossed that sales would rebound for the breaking of the Muslim Ramadan fast in May.

“Although goats have been around for years, the Pennsylvania market is a relatively recent one and meat goat production has been growing in the past decade,” she said.

Livestock producers, sales facilities, meat wholesalers and brokers all agree the growth can be attributed to an increased demand from first- and second-generation foreign-born consumers, especially in and around Northeast metropolitan areas.

Most immigrants to the United States come from areas where goats and sheep are consumed year-round. The Muslim spring holidays of Eid Al-Fitr at the end of Ramadan and Eid Al-Adha (the sacrifice feast) 70 days later, along with Jewish holidays, the Hispanic Cinco de Mayo celebration, Chinese, Hindu and Caribbean events each year see an increase in demand for goats and sheep at the retail level.

The 3 million or so goats raised here each year does not meet demand, so nearly 50% of goats sold in the U.S. are imported from Australia, New Zealand and South Africa.

Goats and sheep are being marketed to American consumers as meat options with lower levels of saturated fat and cholesterol. Heritage Meats USA was part of a farm-to-table marketing program aimed at domestic consumers that included the phrase “No goat left behind.”

And while goat and lamb have made inroads into the gourmet world, they aren’t anywhere near replacing beef on the American dinner table.

The majority of domestic goats are raised in Texas, Tennessee and Georgia, some on huge farms that can accommodate 5,000 nannies.

Many of these goats pass through the San Angelo (Texas) Auction Co., as well as buying stations in the South, on the way to the New Holland Sales Stables to be resold to wholesalers and brokers for the retail halal markets in Philadelphia, New Jersey and New York City.

Tim Baumert of Dalmatia, Pennsylvania, is a meat broker who also manages goat and sheep sales at the New Holland.

“We move nearly 2,000 of these animals at auction each week in a sale that may last 10 hours,” he said. “The number one select goats and high quality sheep will bring $3 a pound when in demand.”

Baumert said goats and sheep customers all have preferences.

The animals purchased at the sale are moved quickly to halal facilities for the ritual slaughter before moving to the coolers of halal markets.

The wholesale buyers and brokers, with ties to countries all over the world, who find their way to New Holland on a regular basis all have stories to tell.

Park, a native of Ghana, East Africa, owns a meat and poultry market in Newark, New Jersey, as well as his own USDA/halal slaughterhouse. It is a family business and he confirms that many of his African customers, who buy from his Victoria Market in Paterson, prefer older billie goats with skin that is crisped as part of the cooking process and eaten as a traditional delicacy.

Anwal, an Arab wholesaler/retailer from New Jersey, has been shopping in New Holland for five years, He owns Prime Halal Meats in Fairview and says his customers are natives of Pakistan who want nothing but fresh meat.

Saleem, an Afghan immigrant, runs a halal market with his brother and has all the animals he purchases processed at Mecca Halal Meats in Newark. Saleem says there is a big demand for goat in northern New Jersey and he is opening an Afghan restaurant with his son to serve this growing interest.

Adnan, a native of Turkey, is a buyer and custom butcher from Chesterfield Township, north of Philadelphia. He buys lambs at New Holland for Turkish buyers who prefer sheep to goat.

Fisher recruited the new producers while Stoltzfus focused on the goat sourcing for Kingdom Livestock. Together, they have been selling goats to farmers impacted by the decline of the dairy industry.

Dr. Robert Herr of Narvon, Pennsylvania, a retired Penn State agricultural educator who started the Eastern Lancaster County ag program and ran a large goat feedlot, was one of the first consultants Stoltzfus and Fisher brought to the new goat farmers to talk about raising market goats. Today, Herr raises pedigree Boer billies and nannies on his farm, as well as meatier, castrated goats.

The new goat producers can contract with Kingdom Livestock to simplify the transition to raising the new animals. Stoltzfus and Fisher offered the producers a guaranteed contract to purchase their No. 1 kids from their does at up to $3 pound, depending on the kids’ weight and the month sold.

“It eliminates the uncertainty for the new producers,” Fisher said, “as they know up front what their animals will sell for as opposed to price fluctuations at auction.”

The initial doelings in the program had 700 kids the first year. Four more farmers were added to the group and producers added doelings to their operations. For 2020, it was expected that more than 2,500 kids would go market from this goat growers group. However, Stoltzfus said Easter orders from retailers were way down due to the coronavirus pandemic.

Ali, the Palestinian owner of Amana Meat Market in northeast Philadelphia, purchases goats from the goat growers program through Kingdom Livestock and says his customers are happy with the quality of the meat. Ali continues to see a strong demand for fresh goat and lamb at his market.

“If my customers are happy, I’m happy,” he said.

Irvin Stauffer of New Holland, Pennsylvania, is one of the charter members of the goat producers group and is pleased with the partnership.

“I had experience raising hogs, and (I) like the goats more,” he said, “They are a little easier to raise and care for.”

Stauffer, like many goat farmers, raises the animals in large, airy hoop structures to shield them from parasites in pastures that cause lung, stomach and intestinal worms.

Stauffer initially purchased 150 doelings and three billies. Already halfway through year two, his does have had nearly 100 kids, and he hopes to have 200 kids total to sell by late spring. Stauffer expects to add 20-30 doelings to his herd this year.

“I couldn’t be happier,” he said. “There was a small learning curve, but nothing that was too difficult. And as a bonus, my children love the goats and are a help in bottle feeding some of the kids when needed.”