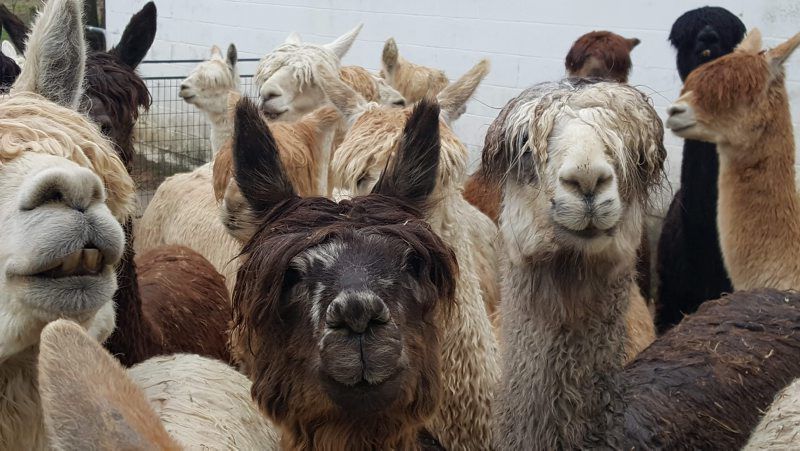 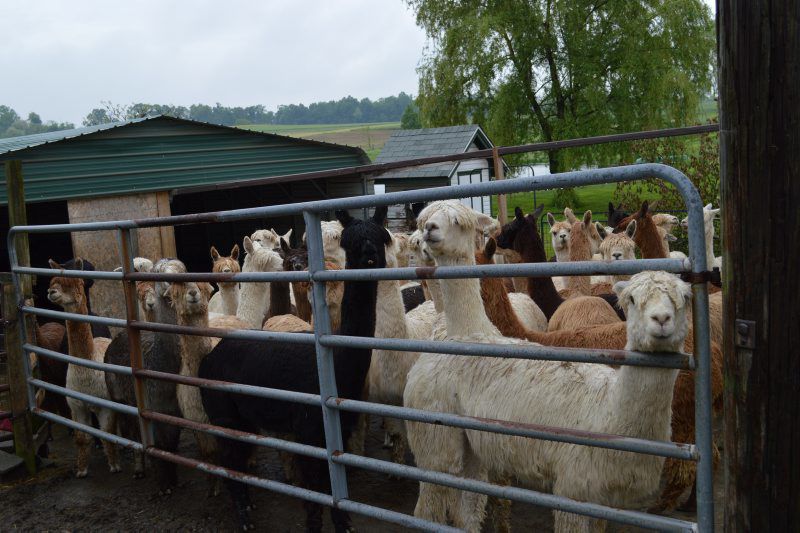 Suri alpacas are known for their longer, more lustrous fleece. 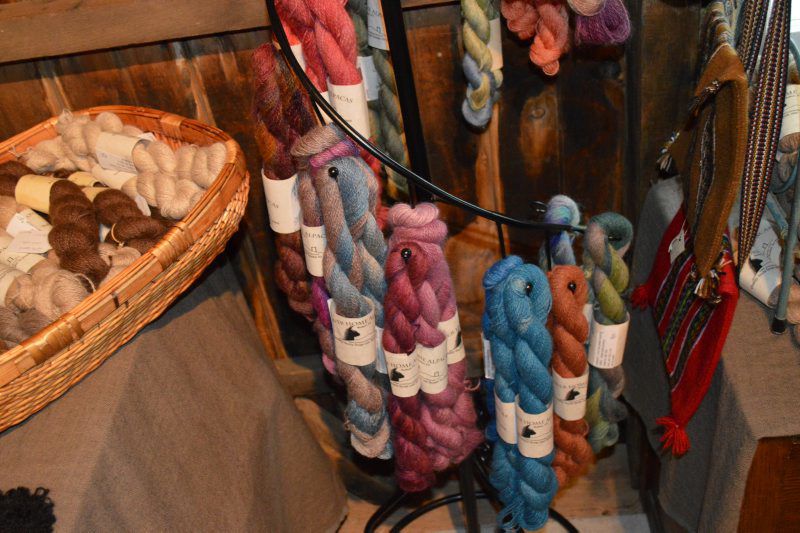 Reed dyes some of the yarn herself for a variety of colors. 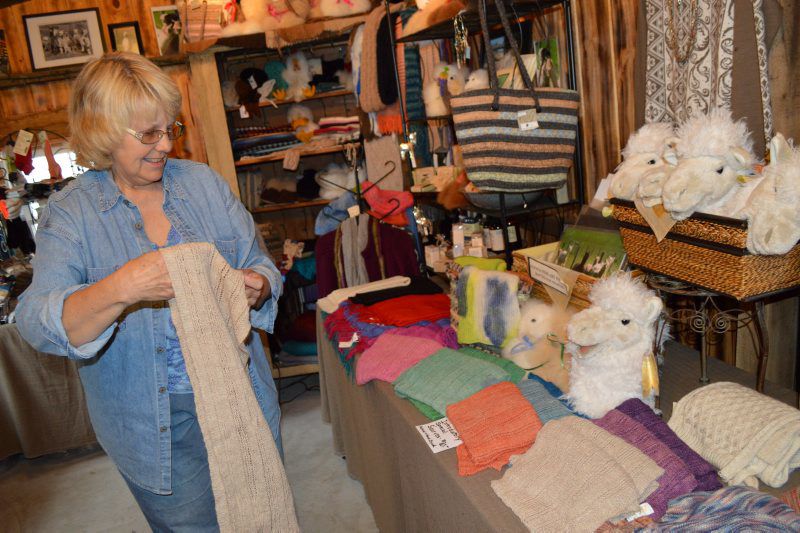 Carol Reed shows off some of the scarves in the store. 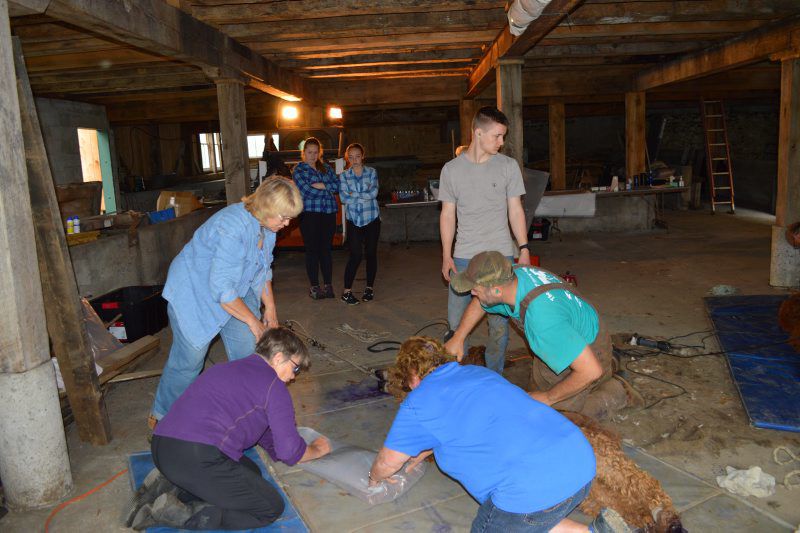 Carol Reed supervises as the just-shorn fleece is bundled up in a process called 'noodling.' 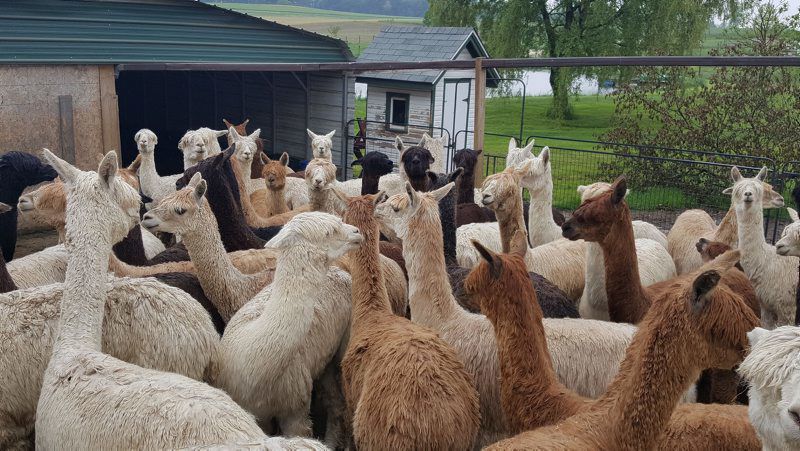 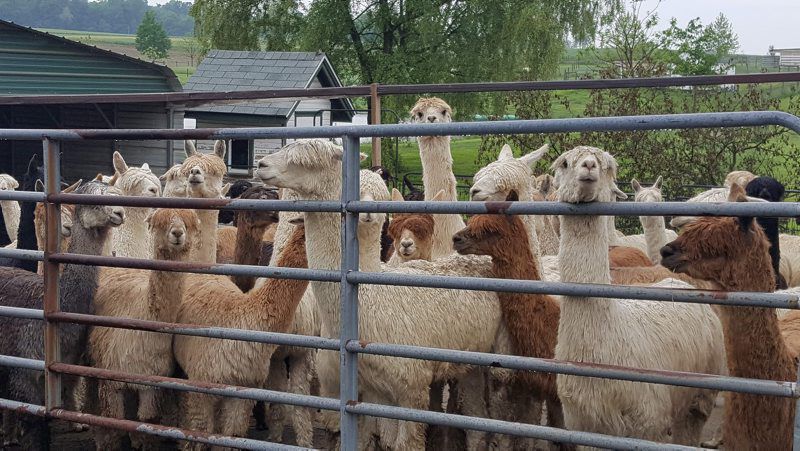 Suri alpacas are known for their longer, more lustrous fleece.

Reed dyes some of the yarn herself for a variety of colors.

Carol Reed shows off some of the scarves in the store.

Carol Reed supervises as the just-shorn fleece is bundled up in a process called 'noodling.'

BETHEL, Pa. — The overcast skies didn’t put a damper on the buzz of the shears at Over Home Alpacas last week. Shearing the whole herd is a two-day event, rain or shine.

The 90-acre farm is home to more than 120 alpacas, and everyone gets a haircut.

A dozen or so volunteers are recruited to help with the alpacas and collect and sort their fleece. Carol Reed, co-owner of Over Home Alpacas, supervises the whole thing.

The farm has been in the family for six generations. It was a dairy operation before turning to beef cattle for around 44 years.

Reed, who works full time as a learning support paraprofessional, and her husband, Richard, bought the property from her parents.

Ten years ago, they decided to put all that space to good use and invest in something new.

“It’s still a family business,” Reed said. She and her husband partnered with Reed’s brother, Allen Rebman, to start their alpaca farm with 11 Suri females.

There are two recognized breeds of alpaca, Suri and Huacaya. Suris make up only about 15 percent of the U.S. alpaca population, and there are even fewer worldwide.

While Huacayas have a fuzzier, teddy bear-like fleece and appearance, Suris have longer, more luxurious fiber, almost like dreadlocks. The Suri fleece is glossier and smoother than their counterparts’.

Because of its quality and rarity, Suri fleece is in high demand from spinners and the fashion industry. The fiber is used primarily for luxury garments, hair extensions and wigs.

Almost all of Reed’s breeding animals are registered with the Alpaca Owners Association and numerous Suri networks.

The farm also agists several alpacas from other owners. Agisting is an old term for livestock that are fed and pastured at another person’s property for a fee.

It’s not uncommon in the alpaca world, where some owners don’t have the space or the time themselves for a whole farm.

About 20 of the alpacas at Over Home are boarders.

“Alpacas are value-added. We use everything,” Korsak said.

“Everything” includes not just the fiber, but the meat too.

“No one is going to raise an alpaca as a meat animal,” Reed said, but at the end of an animal’s life, it’s another option to consider. Alpaca meat is very lean and tastes similar to beef.

Before reaching that point, alpacas provide another product besides their fleece: manure.

As a soil enhancer, alpaca manure works exceptionally well. It has high nitrogen and potassium levels, and can be easily ground into dust to mix with potting soil.

That compost is spread on the four main pastures the alpacas rotationally graze on.

The alpacas are fed mostly a diet of grain and orchardgrass. Richard Reed, who is retired, sells the hay to other farmers as well.

Carol Reed’s mother, Arlene, plays a role in the operation too. On shearing days, she records the pre- and post-shearing weights of each alpaca.

Once all the fleece is packed up in a process called noodling, it’s weighed and sorted by Reed.

The high-grade fleece is set aside for shows and contests. Some is sent to get a histogram to test the diameter and fineness of the fiber.

The rest will be shipped off to spinners and artisans.

“The more you do with the fiber itself, the higher the return,” she said.

As Suri fleece is especially soft, it is turned into a variety of high-quality products. Reed sells many of them in the on-farm store. A variety of socks (alpaca fleece makes especially water-resistant and comfortable ones), scarves, hats, toys and fiber materials are available.

Come the holiday season (and higher demand for fluffy mittens and hats), Reed will keep regular hours at the store. Otherwise, customers can call ahead to schedule a time to stop in.

One of the most striking parts of the store is the variety of yarn up for sale, all of which comes from Over Home’s alpacas.

Originally, only the white alpacas had their fleece turned to yarn for clothing and blankets because it’s easier to dye.

But now, every shade of brown and black is available as yarn.

Reed takes some of the white alpaca yarn and dyes it a variety of colors herself. She doesn’t knit or crochet, but knows what kind of elegant end products come from her alpacas’ fiber.

She hopes that an online store is in the farm’s future. Meanwhile, she brings her alpaca products to trade shows and fiber festivals nearby. The farm also hosts an open house in the fall.

In addition, Reed gives seminars about raising and breeding alpacas. There is still room to grow in the industry, and she aims to keep on top of it.

It’s plain to see that she does.

A Second Round of COVID Payments

In the blink of an eye, Chris Brittenburg lost half of his business and worried he could lose the farm. Read more