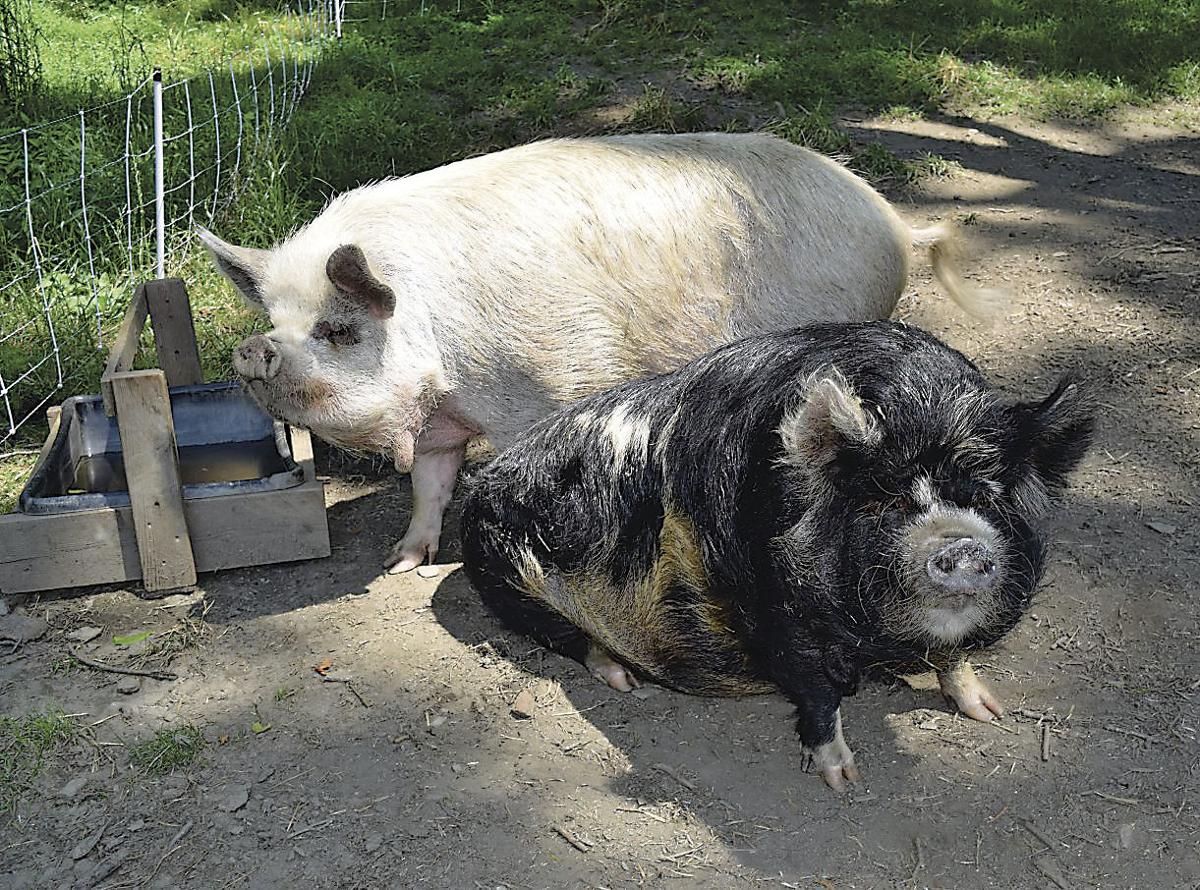 KuneKune pigs like these, at Slackwater Farm in Millersville, Pa., are a docile breed from New Zealand. Wattles and short snouts are breed standards. 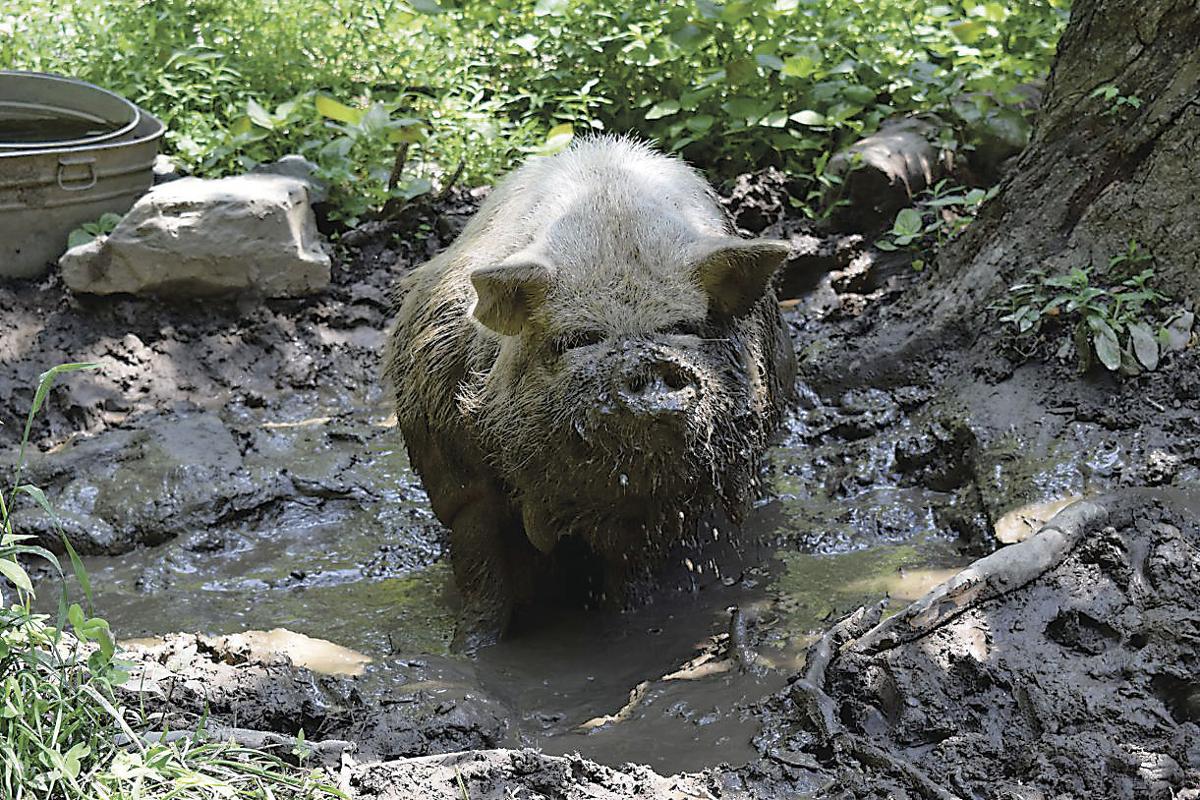 Ollie the KuneKune pig takes a mudbath at Slackwater Farm in Millersville, Pa. 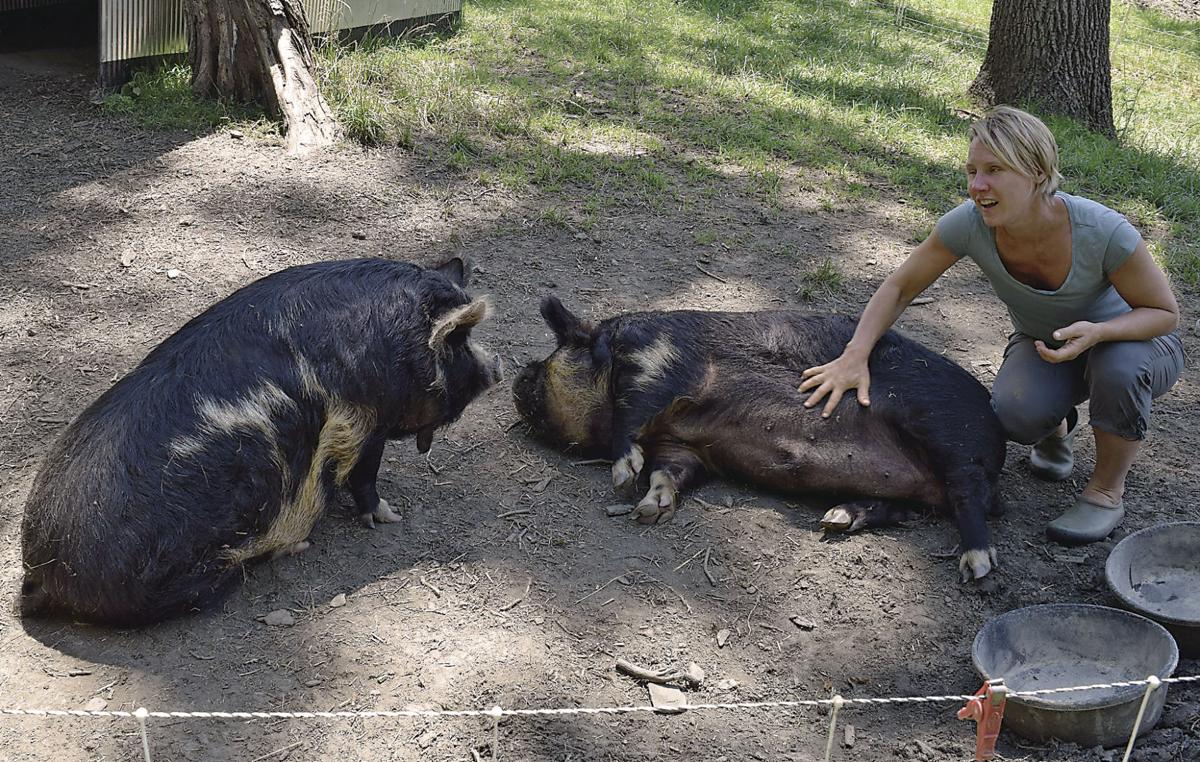 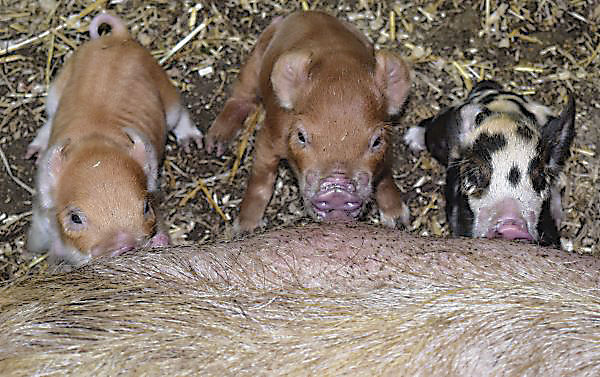 KuneKune pigs like these, at Slackwater Farm in Millersville, Pa., are a docile breed from New Zealand. Wattles and short snouts are breed standards.

Ollie the KuneKune pig takes a mudbath at Slackwater Farm in Millersville, Pa.

SLACKWATER, Pa. — With their unusual appearance and easygoing ways, KuneKune pigs are not your average porkers.

With a foundation herd of four boars and five sows, the couple raise breeding stock and produce meat for the own consumption. They are not currently selling the meat.

For the first 10 years that they owned their home, the couple continued the flock of sheep that came with the property, not doing anything special with the animals.

But after Hurrell read about KuneKunes a few years ago, they decided to try out the unusual breed.

“A couple pigs turned into a couple more pigs,” said Milligan, who works as a community health consultant.

KuneKunes were developed in New Zealand by the Maori people. KuneKune means “fat and round,” according to the pigs’ New Zealand breed association.

Other breeds used for pet pigs, such as the Potbelly and Juliana, can get “grouchy” as they mature, but thanks to their close association with people, KuneKunes are sociable and child-friendly, Milligan said.

One of the family’s boars is even named Friend.

Milligan is not sure she would allow the couple’s 8-year-old daughter, Willow, to be around a 250-pound boar of another breed.

Hairier than their pink cousins at mainstream commercial farms, KuneKunes come in a riot of colors, from cream to gold. They often have black spots.

KuneKunes generally have a pair of wattles, fleshy tassels that hang from the neck.

Their dish-shaped face and short snout give them “an almost comical appearance,” according to the New Zealand association.

The stubby nose also allows them to graze with little of the destructive rooting associated with pigs, Milligan said.

KuneKunes are smaller and slower-growing than commercial pig breeds — an intact boar grows to 300 pounds — but KuneKunes are better than other pigs at putting on weight on pasture, Milligan said.

The pigs rotate through pastures on Milligan and Hurrell’s hilly, wooded property, plus other nearby land.

Milligan turns on the electricity for the portable fencing when the pigs are moved to a new enclosure, but she generally keeps the fence turned off.

“If they’re happy where they’re at, they’re not going to try to get out,” she said.

Using an electrified wire mounted inside a woven wire fence, Milligan trains the piglets not to challenge fencing.

“Most pigs don’t have a reverse gear,” so their instinct is to run forward, which would make them run past a single strand of electric fence, Milligan said. The second layer of fence holds them back.

Pasture is a mainstay of the pigs’ diet, though she also feeds 1 to 2 pounds of grain per day, a mix of nongenetically modified crops sold by Lancaster Ag. The feed is 12 to 15 percent protein.

The pigs finish at 120 pounds in 12 to 18 months. If the pigs are grown longer, they start to put on more fat, Milligan said.

The meat is naturally a little fattier than the average pork, but KuneKune lard is tasty, and the cuts are well marbled, she said.

Milligan and Hurrell have bred the meat pigs to be long, and they prefer to harvest their finished pigs in the fall to avoid overwintering. “We like our pigs to be on pasture,” Milligan said.

All of the boars chosen for meat use are castrated within a week of birth to prevent the meat from getting an off taste called boar taint.

Milligan likes a show pig to have strong, stout legs, the traditional dish face and a frame that rides low to the ground.

Milligan and Hurrell try to breed at the end of the summer to get litters between January and March. They try to get the pigs on pasture as soon as possible and can often run them outside from March to November.

Over the winter, they are fed vegetables, alfalfa hay, timothy hay and meadow grasses.

KuneKunes do well in any climate, but they do need a building or portable hut for shelter. In the winter, “they sleep really huddled together” and stay warm, Milligan said.

In the summer, the pigs like to cool off in mud wallows. “Every few days they get a complete car wash” from their humans to clean off the dried mud, Milligan said.

Raising KuneKunes is an exercise in conservation.

By the 1970s, only 50 purebred KuneKunes were thought to exist in New Zealand.

Since then, breeders have brought the pig back from the brink. There are now thousands of KuneKunes worldwide, according to the New Zealand Kunekune Association.

People were reluctant to eat KuneKunes when the pigs were first imported to the United States. To keep good KuneKune genetics going, eating some of the pigs makes sense, Milligan said.

KuneKunes are rare enough that breeders have to arrange with each other when they want to hold shows. Milligan and Hurrell have landed several reserve grand champions and class first places.

Because KuneKunes are an unfamiliar breed, “it took us a while to find a vet that was willing to kind of work with us,” Milligan said. They use Dr. Mike Pierdon of Elizabethtown.

Milligan and Hurrell sell many of the pigs to other KuneKune breeders or homesteaders interested in producing their own food.

The unusual pigs attract several other atypical types of buyers.

Sight & Sound Theatre in Strasburg, which often uses live animals in its musicals based on Bible stories, trained four of the couple’s KuneKunes to perform in its shows.

The KuneKunes are also good for petting zoos. The zoo gets a piglet in fancy colors that, even when mature, is a manageable size for the setting, Milligan said.

Companion pigs start at $500. These pigs have traits, such as long noses, that make them undesirable as breeding stock, Milligan said.

Milligan and Hurrell vet potential owners to make sure they know they are getting a farm animal, not an indoor or backyard pet. “They need real pasture to graze on,” Milligan said.

The animals are sold in pairs because they are herd animals.

Though the pigs have very real production purposes, Milligan and Hurrell want the pigs to have good lives at their property. “We spend a lot of time with them,” Milligan said.

The pigs are also an educational tool for 8-year-old Willow.

The pigs entail responsibility similar to a dog or cat, but they also provide lessons about where meat comes from. Willow is also “the chief namer,” Milligan said.