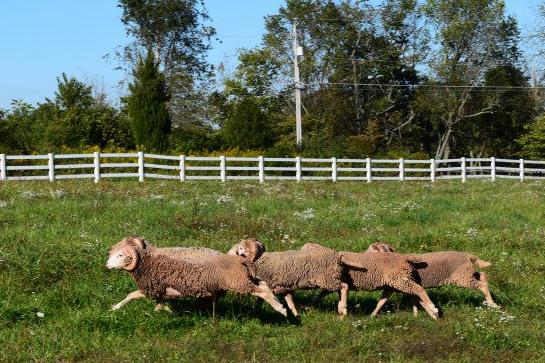 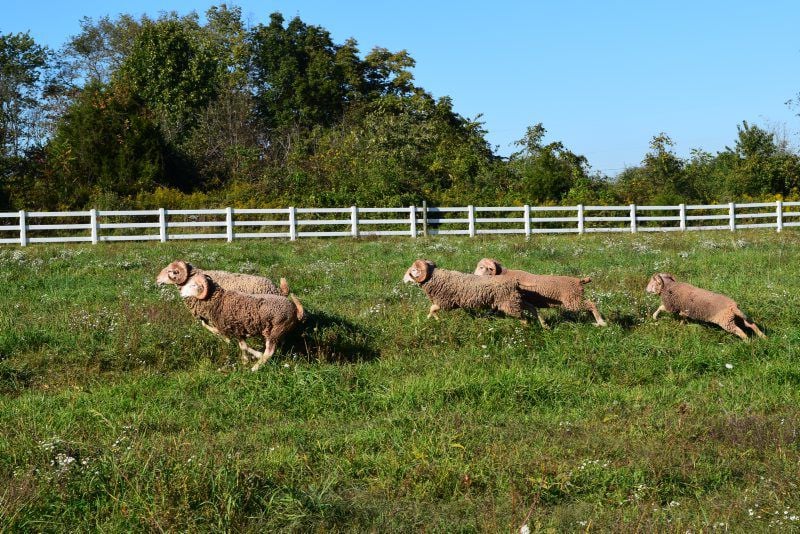 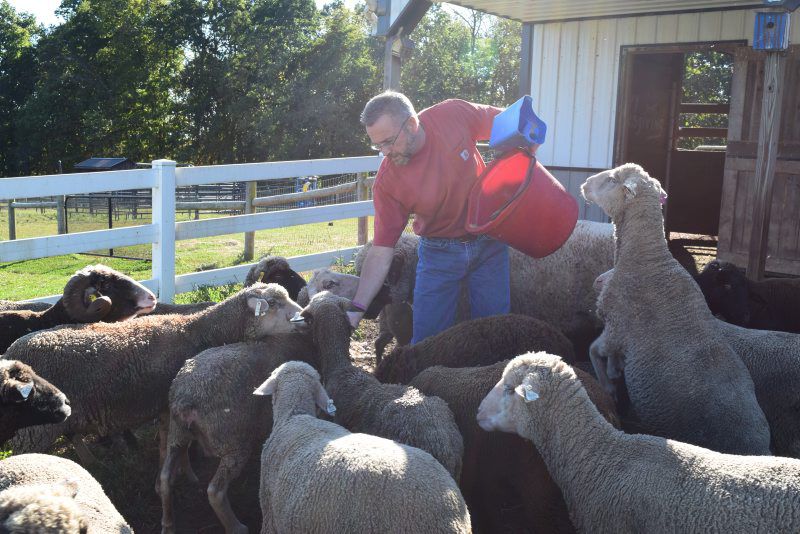 Mike Kearney feeds Santa Cruz sheep at his farm in Lewisberry, Pennsylvania. The breed, descended from feral sheep that lived on a California island, includes only a few hundred animals. 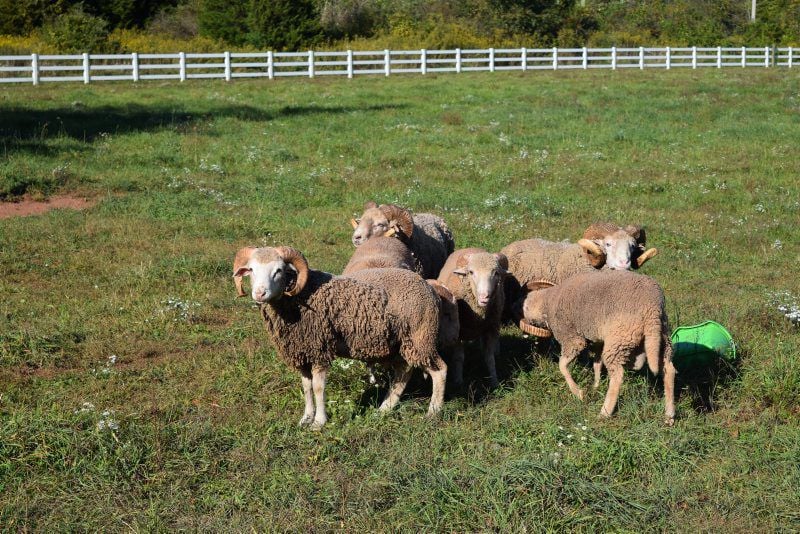 Mike Kearney feeds Santa Cruz sheep at his farm in Lewisberry, Pennsylvania. The breed, descended from feral sheep that lived on a California island, includes only a few hundred animals.

Small, fleet-footed and hardy, they are just a little more wily than a Dorset, Southdown or Hampshire.

And with good reason.

Only 30 years ago, the forebears of many of Kearney’s sheep roamed freely on an island off the southern California coast.

In the past year and a half, Kearney has become one of only about 10 breeders in the country who are working to redomesticate the Santa Cruz breed of sheep.

Kearney, a partner in a real estate development and consulting company, started farming several years ago, inspired by a friend who was producing much of his own food.

Kearney started with solidly domesticated breeds, like Finn sheep and Belted Galloway cattle, but “I started thinking I’d rather raise something that was more on the critical watch list” for ultra-rare livestock, he said.

Ranchers introduced sheep to Santa Cruz Island in the 19th century, and by the Civil War, as many as 24,000 sheep were grazing on the island, according to the National Park Service.

Eventually, the ranchers gave up operations on the island, and The Nature Conservancy and the Park Service moved in to preserve Santa Cruz and neighboring islands.

By the 1980s, the ranchers’ sheep and pigs had gone feral and were overgrazing the island.

The sheep had to go, but The Livestock Conservancy, a group that works to protect rare breeds, ensured that some of the sheep were transferred to farms instead of killed off.

The Livestock Conservancy steered Kearney toward the Santa Cruz breed.

He was intrigued with the island’s history. Spanish for holy cross, Santa Cruz was named for a walking stick bearing a cross that a Spanish explorer lost there. An island native found and returned the staff.

That story appeals to Kearney and his wife, Lynn, who are Roman Catholic. They named their operation Little Flower Farm after a sobriquet of St. Therese of Lisieux, a saint who is important in their lives.

Kearney expanded his flock to 35 Santa Cruz sheep this summer after he bought from a breeder in Oregon who was losing livestock to cougars. Several of Kearney’s sheep are only one generation removed from Santa Cruz Island.

The flock is a pretty common size for a Pennsylvania sheep breeder, but it accounts for almost one-fifth of the 200 Santa Cruz known to exist.

Raising them has been an adventure. “They’re still feral,” Kearney said.

That was evident when it was time to take pictures of the rams. Even though Kearney was carrying a bucket of tasty grain, the rams bolted into a thicket and kept running to the far end of the pasture.

Some of the Santa Cruz seem to be calmer than others, though Kearney said the flock got jumpier after hoof trimming and deworming.

Kearney does not want to get rid of the sheep’s natural behavior, but he said they would be easier to work with if they were more laid back like his Finns.

“I don’t think I’m going to get there with this group, but I think as we lamb and we can try to socialize them a little bit more,” the sheep could get easier to handle, he said.

The ewes have been good mothers so far, giving birth with no help.

While ewes from more common breeds often have multiple births, Santa Cruz sheep tend to have single births, though one successfully delivered twins in the snow.

“I was pretty impressed with their lambing abilities,” Kearney said.

Santa Cruz sheep also have some ability to shed their excess wool. This is apparently an adaptation to island life, and Kearney thinks it could decrease as the sheep adapt to farming.

The whole Kearney family has gotten involved with the sheep. Lynn Kearney took wool spinning lessons, and the couple’s eight children, ages 11 to 23, help a lot with the animals.

“I think it’s really good for kids to be outside,” Kearney said.

The Santa Cruz ewes share a barnyard with a few remaining Finn sheep, goats, a donkey and even a turkey.

Kearney produces about two dozen Thanksgiving turkeys a year. He also keeps laying hens and a dozen silvopastured pigs, but the Santa Cruz sheep and Beltie cattle are his focus.

The sheep follow the cattle in rotational grazing around the 32-acre property.

Santa Cruz wool is unusually elastic and has a high lanolin content. “Any time we mention to someone that spins and deals with fibers that we have Santa Cruz, their eyes light up,” Kearney said.

The Kearneys have contacted a few fiber mills, but they are also looking to sell sheep meat and breeding stock.

Redomesticating feral livestock is a particular type of challenge for livestock breeders.

“Initially it does take a very special group of breeders because they have to pay careful attention to who they mate with whom,” said Alison Martin, executive director of The Livestock Conservancy.

The West Coast and East Coast groups of Santa Cruz sheep had not mixed in a number of years, so Kearney’s purchase of the Oregon flock creates an opportunity to redistribute some genetics, Martin said.

The conservancy is helping to redomesticate several livestock species, including the Hog Island sheep from Virginia and the San Clemente Island goat from California.

In addition to tracking the genetics, the conservancy documents the breed’s distinctive traits.

For the Santa Cruz sheep, those include stretchy wool, alertness, athleticism, hardiness and ability to thrive on poor forage.

Easy keeping is a desirable Santa Cruz trait that could be cross-bred into other sheep flocks, provided breeders keep purebred Santa Cruz around, Martin said.

Kearney certainly wants to maintain and grow the Santa Cruz breed. As he produces more lambs, he wants to popularize the sheep and get more local breeders involved.

“It would be a shame to lose a breed or breeds because of lack of interest,” he said.