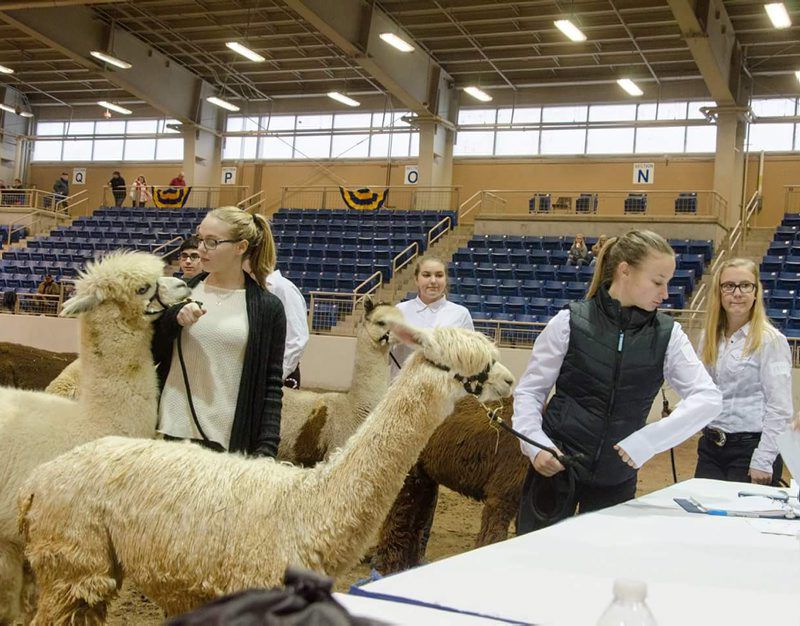 In this photo from last year’s Pennsylvania Farm Show, Sabrina McClintock checks in for her age group. 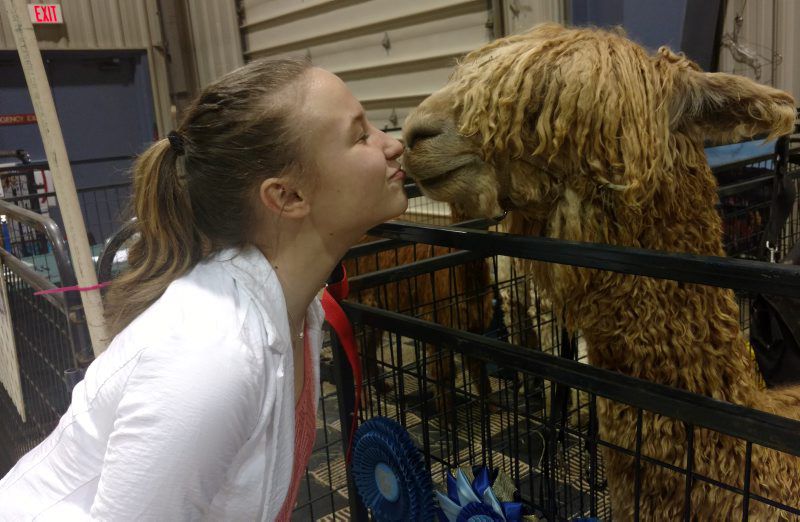 McClintock says the key to showing alpacas is getting them to trust you. 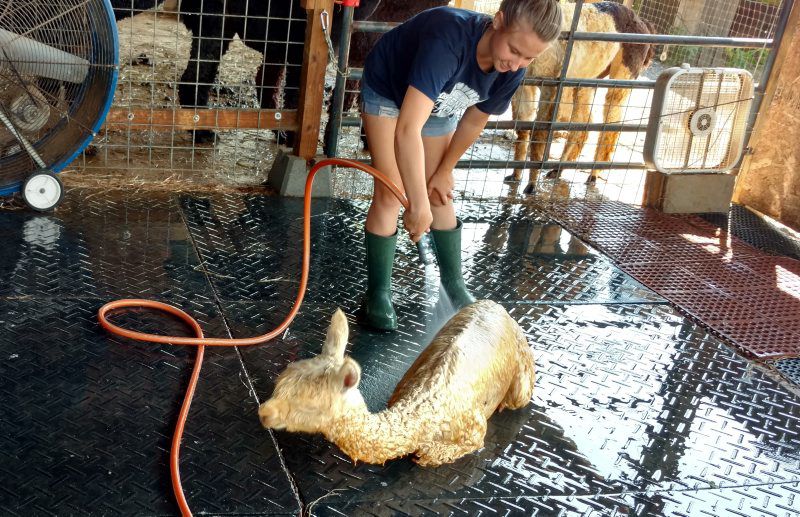 Sabrina McClintock hoses an alpaca down to cool as well as clean the animal.

In this photo from last year’s Pennsylvania Farm Show, Sabrina McClintock checks in for her age group.

McClintock says the key to showing alpacas is getting them to trust you.

Sabrina McClintock hoses an alpaca down to cool as well as clean the animal.

MECHANICSBURG, Pa. — A Cumberland County teen has no room in her backyard for livestock. Yet she has had the grand champion in the alpaca demonstration at the Pennsylvania Farm Show both of the past two years.

Sabrina McClintock, 17, of Mechanicsburg will be entering her last year of eligibility as a youth exhibitor as she shows her alpacas at this year’s Farm Show.

At age 10, McClintock was introduced to Darwin Kell, owner or Bent Pine Alpaca Farm in Carlisle. Her mother, Angie Grove, knew Kell through her job.

Alpacas originated in Peru and have the scientific name Lama pacos.

McClintock, now a senior at Cumberland Valley High School, said she fell in love with the animals and began helping at the farm. For several years, she showed alpacas through 4-H and at the York Fairgrounds.

McClintock said alpacas were the only livestock she could show because her home is in an area where livestock cannot graze.

“I didn’t have to own them or keep at my house,” she said. “Most 4-H and FFA groups require you to own your own livestock so that you can sell them and turn a profit.

“Alpaca clubs differ because we do not currently sell them at livestock sales or for meat,” McClintock said. “Our income comes from agritourism and from their fiber.”

Her mother said, “Most alpaca farm owners work out a deal that if the youth comes to the farm X amount of hours per month then that youth can show their alpaca.”

Still, caring for the animals requires commitment. Either McClintock or Grove has to travel 20 minutes to the farm in Carlisle to care for the animals.

“One of us is there every day to feed,” McClintock said.

Closer to show week, she works with the alpacas on their walk training.

“The biggest thing with them is trust,” McClintock said. “When you take them off the farm they need to know they are in a safe place.”

Kell showed McClintock how to take care of the alpacas when she was a young girl and sold one to the mother and daughter.

“We brush them regularly and bathe them in the warmer months, grooming all year round,” McClintock said. “They have their shearing around Mother’s Day each year.”

She has also begun to breed alpacas.

“I got to choose the parents that would have the baby,” also known as a cria, she said. The first breeding resulted in a female named Cameron.

All of the alpacas at Bent Pine Farm had been named after counties in Pennsylvania. When they ran out of county names, McClintock said, they turned to Disney characters.

She said there are two breeds of alpacas — Suri alpaca and the Huacaya alpaca. McClintock and Grove bought Suris, long-haired alpacas, from an alpaca farm in Punxsutawney.

Suris are the less traditional breed.

In addition to their beauty, Suris have a character that is equally appealing, McClintock said.

“As I got older, I realized the alpacas feed off your energy. If you have a bad day and you are all mopey, they are sad with you,” she said. “It can be frustrating to them if you’re in a bad mood.”

There are 25 alpacas and two llamas at Bent Pine Farm, and all but one of the alpacas are Suris.

They are “so gentle and docile and caring,” McClintock said. Children with autism are often invited to the farm to interact with the animals.

“They are able to be with these animals because they are not at all aggressive,” she said, “They are nurturing, and the children realize they don’t want to hurt them.”

These gentle animals are not only champion nurturers, they have also been champions at the Farm Show.

“I have had grand champion in all of my shows in the last two years,” not just at the Farm Show, McClintock said.

“When you show so long, last place is not expected,” she said. “But if I don’t win, I am not a sore loser either. It just means I had a bad day.”

McClintock is a member of the Cumberland County Alpaca 4-H Club, which is part of the Pennsylvania Alpaca Owners and Breeders Association.

She also served as the state alpaca princess in 2016-17 and as the reserve the year before that.

Cheering on McClintock and her alpacas at each show along with her mother is Kell, her mentor.

“He is like my grandfather,” she said. “He taught me everything. When I win he gives me a lot of teary hugs.”

McClintock has long-term plans after her last year showing at the Farm Show. After three years in the culinary arts program at Cumberland Perry Area Vocational Technical School, she wants to combine her passion for agriculture with cooking.

“I want to do a farm-to-table business one day,” she said.

The alpaca show and demonstration at the Pennsylvania Farm Show will start at 8 a.m. Tuesday, Jan. 9, in the Equine Arena.