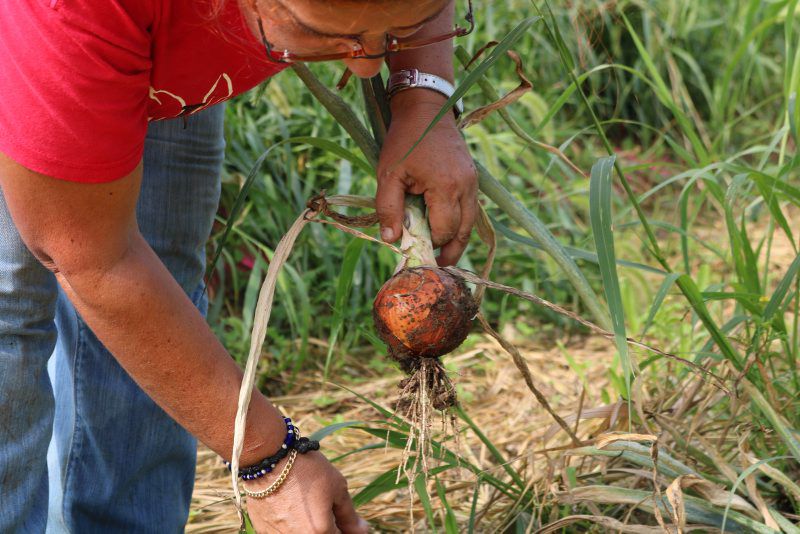 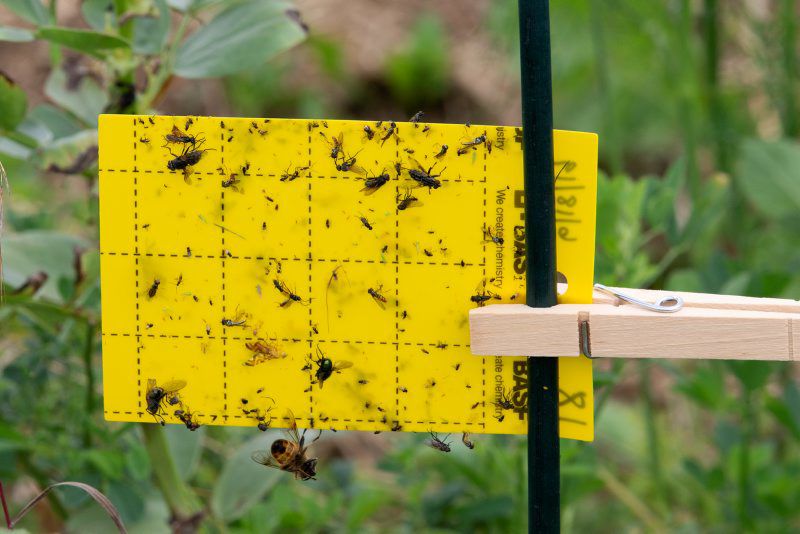 Photo provided by Rodale Institute Organic farmers can use yellow sticky traps to know when allium leafminers are flying on their farm.

Photo provided by Rodale Institute Organic farmers can use yellow sticky traps to know when allium leafminers are flying on their farm.

LANCASTER, Pa. — Cover crops, row covers, mulches and other tools can help onion growers control one of their worst pests without using insecticides.

The allium leafminer, native to Europe, was first discovered in Lancaster County in 2015 and has since expanded across the Mid-Atlantic.

It feeds on onions, garlic, chives and related species, damaging the leaves and bulbs.

A few organic-approved pesticides, including Entrust and Aza-Direct, can be used against leafminers.

But non-pesticide controls are a pressing need because Pennsylvania produces about $700,000 in organic onions and garlic each year, according to Gladis Zinati, director of the Rodale Institute’s Vegetable Systems Trial.

Zinati has been testing leafminer management in yellow onions and presented her findings at the Pennsylvania Association for Sustainable Agriculture conference on Feb. 7 at the Lancaster County Convention Center.

One of the simplest strategies is using row covers to protect the onions from the flies during their egg-laying periods.

Growers should not wait till they find leafminers to put out the row covers. By then, the damage will already be done, she said.

Leafminer flies are active in the early spring, usually March through May, and again in the fall, usually September to October.

They feed on allium foliage and then puncture allium-crop leaves to lay rows of eggs. The larvae feed on the plant, tunneling down into the leaves or the bulb.

Harvested crops may have larvae or pupae inside as well as damage or rot that spoils the crop.

“If you see a ‘streak’ going down the onion leaf, the eggs will hatch in a few days,” Zinati said.

Row covers should be used in both the spring and fall. “The second generation of allium leafminer is the most dangerous,” Zinati said, because it will infest the next year’s crop.

“Surprisingly, there was not much damage on plastic mulch,” Zinati said, “and only two onions had damage on black plastic.”

In the Rodale research, the silver plastic provided slightly better onion yields than the black plastic.

Both produced much higher onion yields than red plastic, which trapped moisture underneath and had other problems during her research trials, Zinati said.

Yellow sticky traps should be used to monitor leafminer populations. The leafminers were not attracted to blue sticky traps.

Growers should place the traps in late winter or early spring and keep them up throughout the growing season, Zinati said.

Allium leafminer flies are so small — less than 3 millimeters — that they can be hard to identify with the naked eye, though it’s possible for someone who knows what to look for.

Zinati’s team studied the sticky traps under microscopes, and growers can send traps to their local Extension office for identification.

The allium leafminer has an orange-yellow patch on the top of its head and yellow or white markings on its sides and “knees.” The wings fold together horizontally above the abdomen.

Egg masses appear as a row of brown dots on leaves.

One of Zinati’s most interesting recommendations was to plant brassica cover crops before the allium crop.

The incorporation of the brassica cover crop into the soil added sulfur to the soil, which was taken up by the onions.

Onions grown after brassicas had an elevated pungency rating, which is connected to sulfur availability. Leafminers preferred the less-pungent onions.

Zinati theorized that the allium leafminers could sense (upon feeding and before laying eggs) the sulfur in the onion leaf as well as its lower levels of nitrogen.

And onion yields in the post-brassica plots were twice as big as the yield from plantings that followed a non-brassica cover crop mix of hairy vetch, rye, white Dutch clover and sunflower.

This legume and grass mix fostered mycorrhizal fungi in the soil, which increased the nitrogen in the onion leaf through the fungi’s symbiotic action at the roots. This made the onions more attractive to leafminers.

The leafminer adults preferred feeding and laying eggs on the onions planted where the legume-and-grass cover crop had grown.

The soil there had more than double the amount of mycorrhizal fungi in it, testing showed, and thus produced higher nitrogen levels in less pungent onions.

As the onions grew and the effects of the brassica sulfur dissipated in the soil over time, some leafminers eventually started laying eggs on the onion leaves in the brassica-crop area, but the onion bulbs themselves had no leafminer damage.

Onion roots also use mycorrhizal fungi, but the low mycorrhizal fungi soil caused by growing the brassica cover crop does not harm onions, Zinati said. In fact, the more sulfur in the soil, the better storage life for onions.

Onion variety had the least influence on leafminer damage, though Zinati could make some judgments.

Cortland ended up with the most leafminer injury overall. Sedona had somewhat less damage, and Talon even less.

Talon and Cortland on black plastic mulch had leafminers, but it didn’t result in any damage to the bulbs, Zinati said.

No matter the variety, growers should get onion transplants that are pest-free.

Farmers must check transplants for crop damage or use a quarantine method, like a greenhouse or row cover, and put sticky traps inside the quarantine zone.

If the young onions arrive already infected with allium leafminers, that is a problem, Zinati said.

The timing for leafminer control will differ among the various allium crops, but Zinati was pleased to find that it is possible to get excellent yellow onion yields without using pesticides.