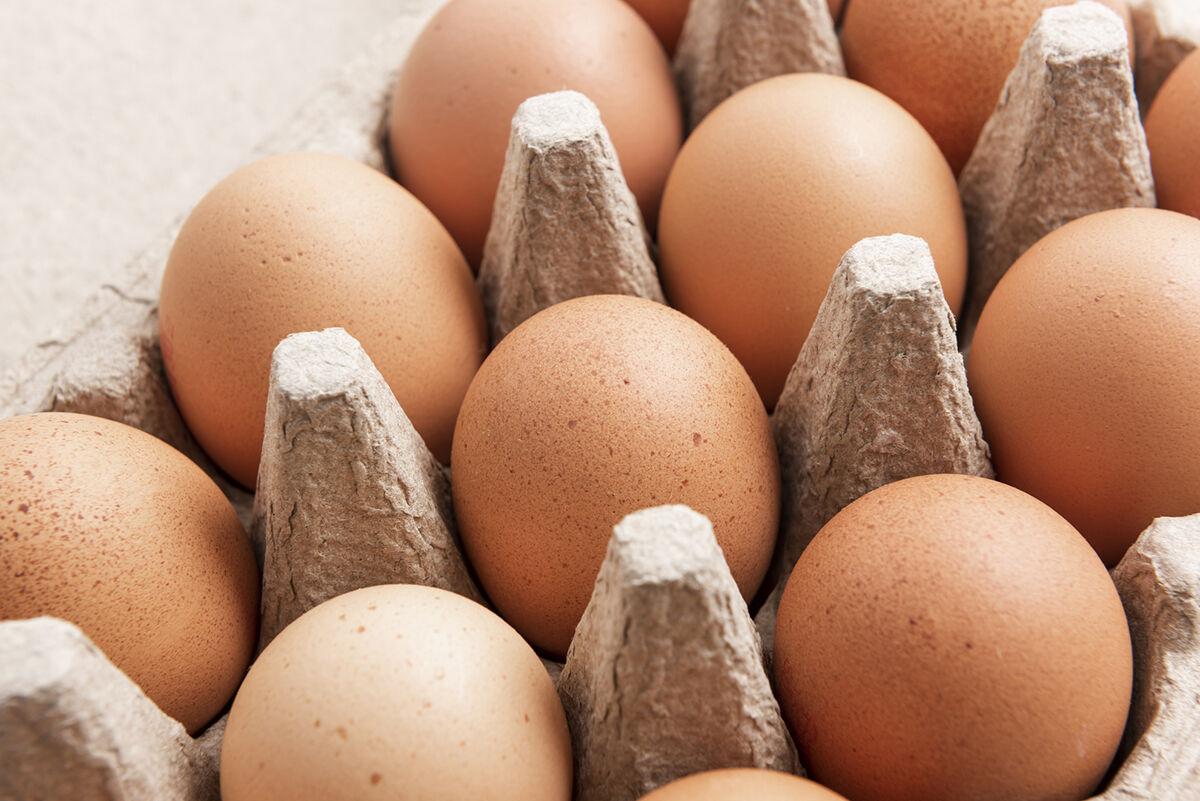 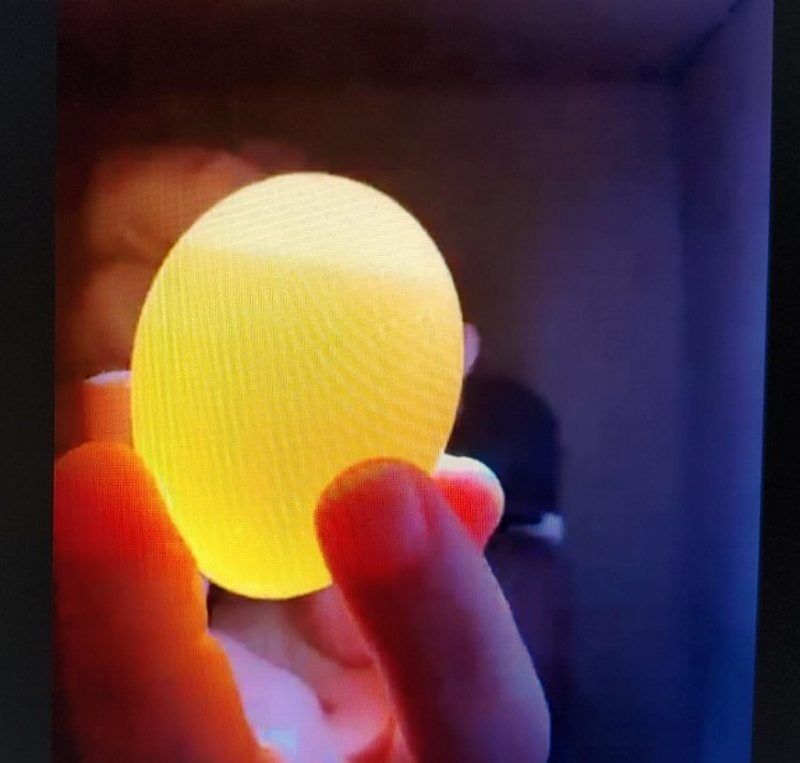 Emily Shoop used a high-intensity flashlight to demonstrate how this unfertilized egg “lights up like a Christmas bulb.” Note the large white air cell at the top of the egg, indicating it is far from fresh. 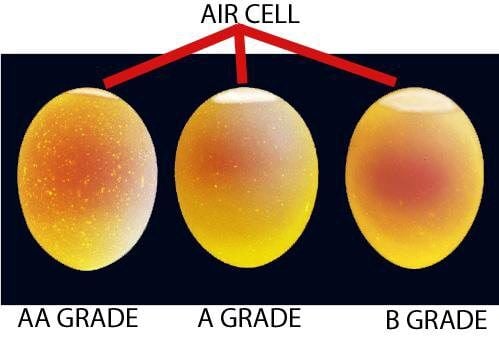 These egg candling views illustrate the comparison between USDA Grade AA, A and B eggs.

If you’ve never heard of “egg candling,” you’re behind the times. Egg candling is a practice that dates back centuries and, as the name implies, it originally involved using the light from a candle to shine through an egg shell. Over the years, this process has served two key purposes — one for breeders of chickens and the other for consumers of eggs.

These days, “candling” is achieved using a high-intensity light instead of a candle. This has enhanced the ability to view the development of an embryo inside an egg, as well as improved the assessment of edible eggs’ interior quality in a non-invasive way. As part of January’s virtual Pennsylvania Farm Show, a webinar called “Candling Eggs at Home” was presented by Emily Shoop, a Penn State Extension educator in Mifflin County.

Since eggs sold in grocery stores are laid primarily by hens that have not been exposed to a rooster, those eggs are infertile, so there are no chicken embryos inside them. Shoop said that, while she will be presenting a future webinar about examining embryos via candling, the focus of her Farm Show presentation was about using candling as a way to determine edible eggs’ quality and freshness.

Shoop said that one determinant of egg quality, which is hard for a consumer to monitor effectively, is the period of time between when the egg is laid and the final point of use. While store-bought eggs are typically fresh, they could still potentially have been laid two to three weeks before being purchased. Candling eggs at home can help determine how fresh an egg is, as well as whether certain imperfections such as cracks, contamination, blood spots or meat spots exist within an egg.

Fresh eggs with a thick albumen are essential for creating egg foam, the frothy substance that forms when an egg white is whipped for use in dishes like meringues and angel food cakes, Shoop said. She added that, if 3-week-old eggs are inadvertently used in baking instead of fresh eggs, the resulting baked goods will be safe to eat, but there will be noticeable differences in height and texture.

Shoop explained that eggs are graded using USDA’s scale ranging from Grade AA for eggs with superior freshness and internal quality to Grade A high-quality eggs (the most common grade on grocery shelves) to Grade B, the lowest quality eggs for sale, usually sold as either liquid or powdered eggs. To determine the grade of an egg based on its internal quality, measurement is made of the depth of its air cell, which is the pocket of air at the larger end of the egg, located between the egg’s inner and outer membranes.

As an egg ages, the size of its egg cell gets larger. Shoop said that this process begins when the egg is laid and comes out of the chicken’s body at a temperature of 95 to 100 degrees. As the egg cools to the temperature of the environment in which it was laid, its membranes start to pull away from the shell. Then, as the egg ages, pores in its shell allow moisture and carbon dioxide to exit and be replaced by fresh air, causing the air cell to continue growing. The air cell remains unseen within the shell until the egg is broken open, when the size of this pocket becomes visible inside the large end of egg.

Obviously, it is beneficial to know the egg’s quality status before it is removed from its shell, which is where candling comes in. Shoop said that, if an egg is viewed from above its large end, with a bright light shone through the egg shell, a Grade AA egg will have a dime-sized diameter air cell, which displays as a white disk. A nickel-sized disk is indicative of a Grade A egg, while a Grade B egg will have a disk the size of a quarter. She said that, due to the larger amount of pigment in their shells, brown eggs can be more difficult to candle than white eggs.

While commercially sold eggs are inspected for freshness and possible imperfections as a routine part of their processing, for people raising their own chickens or obtaining their eggs from small home-raised sources, candling can help assure egg quality.

Shoop listed the essentials of do-it-yourself egg candling as: a dark room; a bright flashlight (an LED one works best); egg cartons; a dime, a nickel and a quarter; and the eggs to be inspected.

Shoop advised that an Official Egg Air Cell Gauge has been developed as part of the USDA’s Grading Standards for Interior Quality. Known as Form PY-35, it is a stylus that can be held over an egg that is being candled to aid in determining air cell depth. Further information is available at https://mysrf.org/pdf/pdf_poultry/p18.pdf.

When an unfertilized egg is being candled, Shoop demonstrated that it “lights up like a Christmas bulb.” The air cell shows up as a white area at the top of the egg, which contrasts with the egg’s darker portion, consisting of its albumen and yolk. Small light spots revealed during candling are thin parts of the shell, which indicates they are more likely to break. Shoop further explained that if the air cell has become damaged, the air from it will remain free-floating in the egg. In some cases, the air cell will form around a hairline crack in the egg instead of at the top of the egg, representing an opportunity for contamination if bacteria enter through that crack.

Shoop pointed out a little white dot in the yolk of an egg that had been removed from its shell. This harmless dot is called the “germinal disk” and is merely an indicator of an egg that has not been fertilized. A red dot in the egg’s albumen is known as a blood spot, while a meat spot is a brownish remnant of tissue from the hen that laid it. Eggs with blood spots or meat spots are safe to eat, but they should be pulled from the egg supply to avoid consumer concern.

What happens to eggs that don’t pass muster? After Grade AA eggs lose their super-fresh status, they usually end up in pet food, rendered protein or non-food items like cosmetics, workout supplements or other products containing egg protein or egg fats, Shoop said.

Otherwise, backyard poultry producers with uncontaminated eggs not suitable for marketing, may cook and feed them to dogs, birds, etc., or compost them. Egg shells can also be baked and used to supply calcium for houseplants.

Shoop said there will be future webinars of interest to small and backyard poultry producers on topics like food safety for small flocks, raising backyard poultry and pastured poultry. Details can be found by going to http://extension.psu.edu and searching for “Small and Backyard Flocks.”

According to the American Egg Board, Americans consumed 287 eggs per capita in 2019. However, that sizable number doesn’t mean the average American couldn’t use a little more “egg-ucation” about these tasty protein sources.

He shared a variety of facts that shed light on this foodstuff, saying that eggs are “versatile, inexpensive when compared to other protein sources, and are not only tasty, but will take any spice you give them.”

Eggs are divided based on weight into seven sizes, ranging from peewee through super jumbo, but consumer experience is often limited to the medium, large and extra-large eggs typically seen in grocery stores. Martin said that recipes generally call for using large eggs, which weigh approximately 2 ounces each. When using eggs of other sizes, especially for baking, it may be necessary to adjust the number of eggs used up or down to achieve equivalency. The website incredibleedibleegg.org provides information on these equivalencies, as well as other pointers on cooking and baking with eggs.

Egg cartons also specify the egg’s grade. Use Grade AA for airy specialties like egg foams and angel food cakes or when appearance is important. Grade A eggs are the most commonly sold eggs in grocery stores and are good for general purpose cooking and baking.

The color of the egg shell relates to the breed of chicken laying it. While the comparative merits of white-shell versus brown-shell eggs are often debated by consumers, in reality, the nutritional and performance factors of an egg are determined by the flock’s diet.

Egg cartons bear a store name or brand name, and along with that may be terms like “cage-free” and “organic.” Organic egg production is regulated by the USDA’s certification program, which includes requirements like an organic diet, access to the outside and housing density limits — all of which contribute to the higher cost of organic eggs.

Martin explained that “cage-free” chickens should not be confused with “free range” chickens. Free-range hens have access to roam outdoors, whereas their cage-free counterparts are typically confined inside a structure, though not caged.

The expiration date shown on the short end of an egg carton is the date a store should pull it from sale; it is not the eggs’ “use by” date. More important to the consumer is the carton’s packaging date, expressed as a three-digit number between 001 and 365, corresponding to the day within the year. Per the FDA’s Egg Safety Rule, it is safe to use eggs for four to five weeks beyond the packaging date if they have remained refrigerated at or below 45 degrees, though as an egg becomes less fresh, its uses in cooking and baking will vary accordingly.

As for refrigeration, Martin explained that, although some well-known television chefs might leave a bowl of eggs setting out at room temperature, this is not a food safe practice, due to the potential for pathogen growth. Instead, Martin recommends eggs be stored in their cartons in the bottom of the refrigerator, which is its coldest area. He cautioned against transferring eggs into holders located in the refrigerator doors of frost-free refrigerators. That scenario subjects eggs to repeated defrost cycles, which will negatively impact them.

Martin shared that the secret to perfect hard-cooked eggs is to start with older eggs placed in a pot with cold water at a level 1 inch above the eggs. Bring to a full boil, then remove the pot from the heat and cover it. After 12-13 minutes, drain and place eggs in ice water to facilitate peeling. Overcooking will break down sulfur bands, resulting in a greenish-gray line around the perimeter of the yolk, Martin said.

When baking desserts like angel food cakes that call for whipped egg whites, Martin urges using fresh, room-temperature eggs and making sure cake pans and mixers are thoroughly clean. The resulting egg foam should be folded, rather than mixed into the dry ingredients.

Columnist Joyce Bupp reflects on one of the challenges of free-range chickens — hunting for eggs — in this week’s On Being a Farm Wife.

Creating and Caring for Your Backyard Chicken Coop

Interested in raising backyard chickens? Here’s what you need to know about building and maintaining your coop.