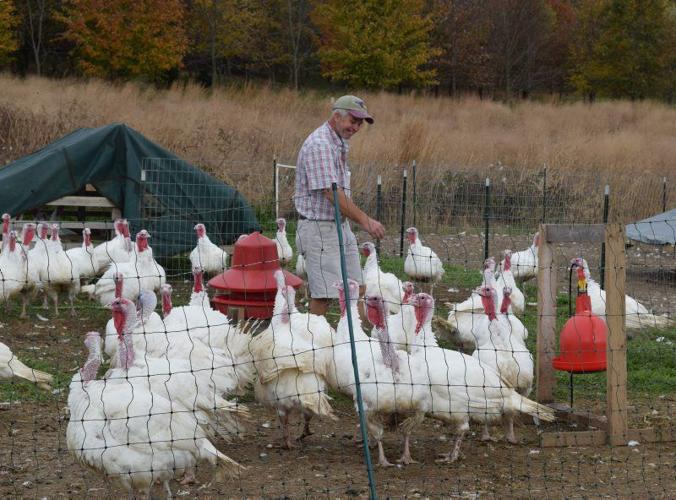 Earl Keiser walks among his turkeys in Glen Rock, Pennsylvania. Keiser raises poultry for high-end restaurants in Lancaster and Philadelphia. 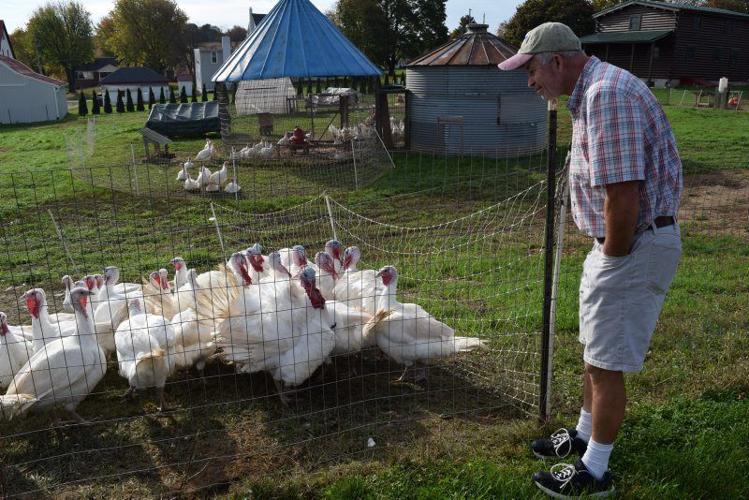 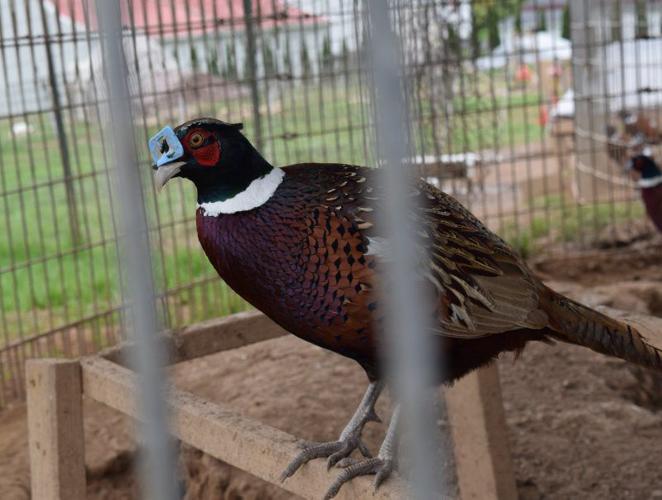 A pheasant wears a blinder. Earl Keiser uses them to reduce pecking. 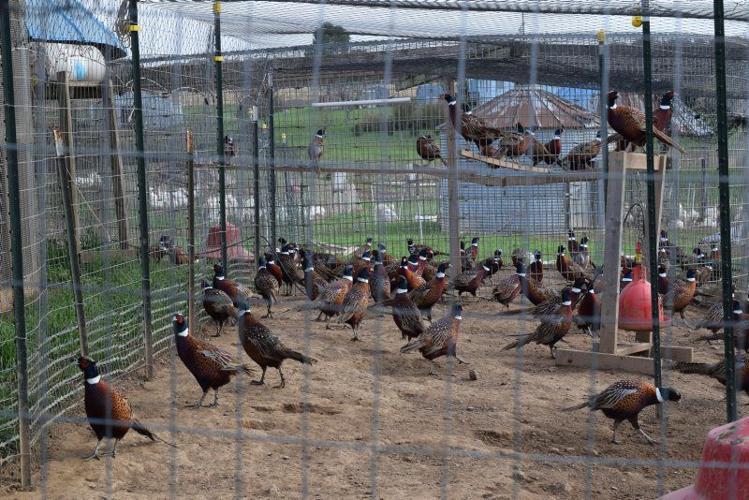 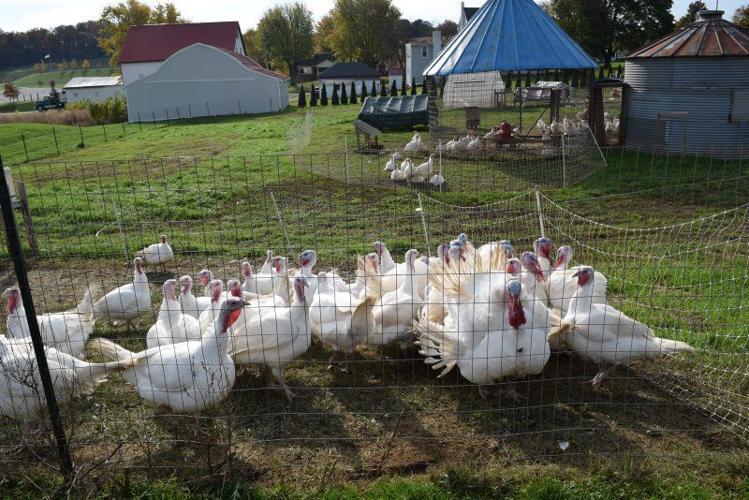 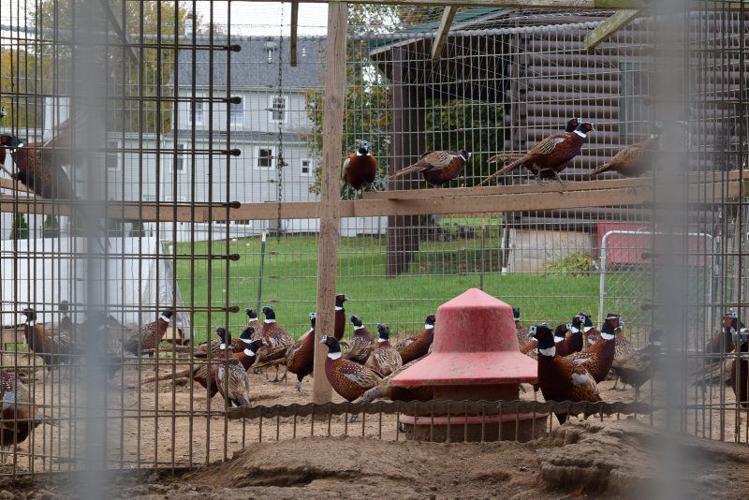 Pheasants move around their enclosure at Keiser's Pheasantry in Glen Rock, Pennsylvania. 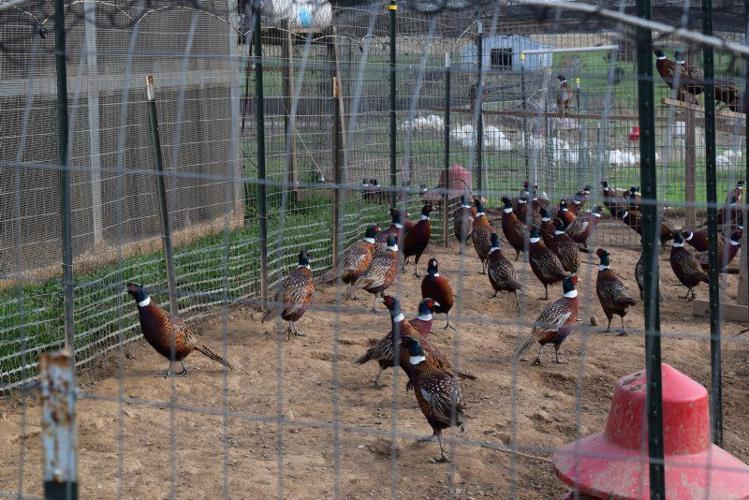 Earl Keiser walks among his turkeys in Glen Rock, Pennsylvania. Keiser raises poultry for high-end restaurants in Lancaster and Philadelphia.

A pheasant wears a blinder. Earl Keiser uses them to reduce pecking.

Pheasants move around their enclosure at Keiser's Pheasantry in Glen Rock, Pennsylvania.

Sure, he’s been selling birds since the spring, but this is a prime time to get a fresh turkey, duck or pheasant that’s been raised outdoors.

Keiser, who runs Keiser’s Pheasantry in southern York County, raised chickens when he was a boy and began producing pheasants 27 years ago.

At first, he released the birds into the wild, which he is allowed to do as a state-licensed propagator, but he also started raising them for meat about a decade ago.

Keiser got connected with high-end, chef-driven restaurants in Lancaster, York and Philadelphia, and now produces 300 pheasants a year.

He also raises about 150 turkeys, mainly for Thanksgiving, as well as 1,000-plus ducks and 450 broilers.

Like most pastured poultry raisers, Keiser buys baby birds from a hatchery and raises them during the spring, summer and fall.

The birds are kept segregated by species — his turkeys bullied the ducks in his only experiment with mixing kinds — and they rotate around 8 acres of grass.

Turkeys don’t scratch the ground like chickens do, but the big Broad Breasted Whites are still hard on the grass, Keiser said.

While the birds are on the starter mix, Keiser puts red vinegar in their water. “That gets their systems going and gets them cleaned out,” he said.

He also gives them vinegar to perk them up after prolonged rains, which are hard on the birds.

The turkeys, ducks and chickens are protected by woven-wire fencing. Keiser used to have electric fencing because he was concerned about coyotes, but that fencing required too much maintenance and apparently wasn’t necessary.

About three times a year an opossum will dig under the fence and kill a bird or two, but that’s a relatively small concern.

“Most of my problem is from above,” Keiser said.

Raptors are protected by law, so there’s little Keiser can do to deter them. He’s tried noisemakers, but “the predators, they just laugh at you,” he said.

At least the hawks eat their prey. Owls will decapitate 50 ducks in a night and leave the bodies behind, Keiser said.

The pheasants have the best protection on the farm.

They live in a building with a screened-in porch, a cylindrical corn crib, and an outdoor pen covered with netting. The fencing around them is buried deep so nothing can burrow in.

Occasionally, a hawk will dive-bomb the pen, only to bounce off the overhead netting like it’s a trampoline.

Keiser plans to put netting over his chickens next year.

Despite their protection, the pheasants haven’t exactly become domesticated.

Fast, flighty and naturally carnivorous, Keiser’s pheasants are outfitted with blinders to make it harder for them to see, and peck at, blood.

The wire-mesh corn cribs are outfitted with perches where the dominant pheasants get to sit. These pheasants also grow the longest tails.

Every two weeks, though, one of the groundlings fights the boss pheasant and dethrones him, Keiser said.

The birds still instinctively watch the sky for hawks as they scamper around the pen. “In the wild you have to be nervous all the time,” Keiser said.

Those wild instincts work in the pheasants’ favor — Keiser still occasionally releases a few for hunters. The free-roaming birds like the 5 1/2 acres of grass and woodlot out back, which Keiser put in the Conservation Reserve Enhancement Program.

Despite his rural setting, Keiser describes himself as an urban farmer.

Several houses are crowded around the farm, including one with windows looking out on the duck pen, so Keiser feels a responsibility to be a good neighbor.

Fortunately, the birds don’t seem to generate much noise or odor. Keiser use bag traps to catch the flies, and he has arranged for the feed truck to deliver before 9 p.m.

Of course in everything he does, Keiser, who also works as a second-shift school maintenance man, wants to represent pastured poultry well.

He finds the meat quality is different from a bird raised in a house. “You can cut the meat with a fork,” he said.

That’s why Keiser enjoys selling his birds to creative and skillful chefs at upscale restaurants. “I want my prize animals to go to the best,” he said.

Once a week, usually Saturday, Keiser delivers his birds to the half dozen restaurants he works with in Philadelphia.

Even if he’s not delivering anything to the restaurant that week, he makes a point to at least stop in and say hello, maybe have a bite to eat. “That’s how you keep people happy,” he said.

Each of the restaurants has multiple farmer suppliers, and Keiser likes to show support for his fellow producers, as well as the chefs who use his product.

The in-person visits are also important, Keiser said, because the chefs like dealing with him directly. It gives the business relationship a personal touch.

He’s even had chefs from The Log Cabin in Leola come out to the farm.

“The most challenging thing was to learn the lingo so I knew how to talk to a chef,” Keiser said.

He delivers a lot of fresh meat, but at his customers’ request, he has started offering frozen, vacuum-sealed meat, too, so that he has a supply in the winter, when it’s too cold to raise birds.

Keiser used to carry a book of bird photos with him, but in the past few years he’s replaced it with an Instagram page.

His page features videos of the birds, pictures of the chefs’ creations and other snapshots from his life.

He still hasn’t built a website and doesn’t plan to — “to me, that’s so impersonal,” he said.

At any rate, Keiser has hit his production capacity, so he hasn’t looked to add more customers this year.

Last year, one of his most surprising customers came to him.

In summer 2016, a catering firm in northern Virginia invited him to provide duck and pheasant samples as options for the next year’s presidential inaugural luncheon.

The election hadn’t happened yet, and Keiser said he didn’t mind who won so long as he could provide a bird.

President-elect Donald Trump apparently chose beef, the other meat in the running, during a tasting. “But still, what an honor,” Keiser said.

Apparently, Barack Obama is the only president who has had pheasant for his inaugural meal, he said.

In a few weeks, Keiser’s turkeys will feed people in another great American tradition, Thanksgiving.

He might not be feeding a president, but at least the meal will combine two of Keiser’s favorite things — his chef customers and his birds.