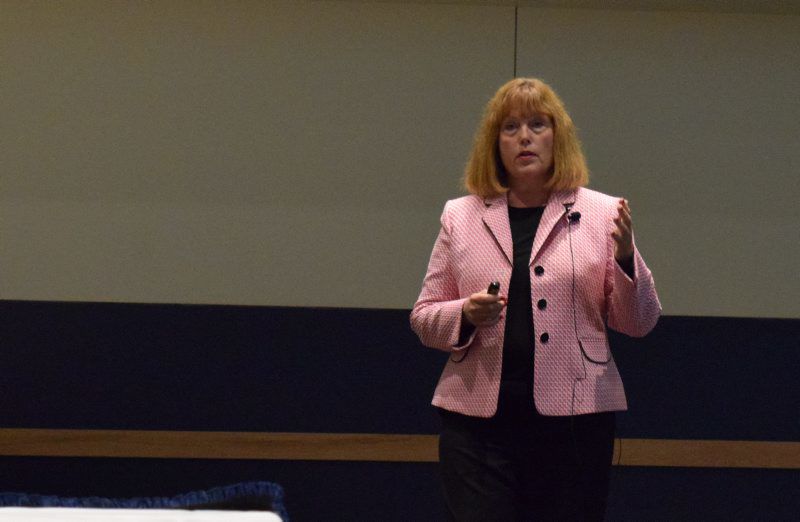 Sherrill Davison, a professor of avian medicine and pathology at the University of Pennsylvania School of Veterinary Medicine, speaks about the state's coryza outbreak. 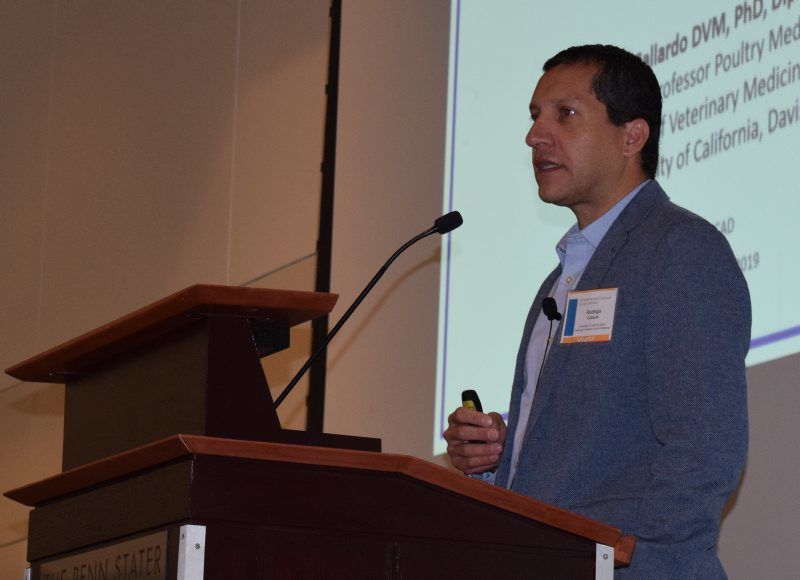 Rodrigo Gallardo, an avian sciences professor at the University of California, Davis, speaks about coryza in his state. 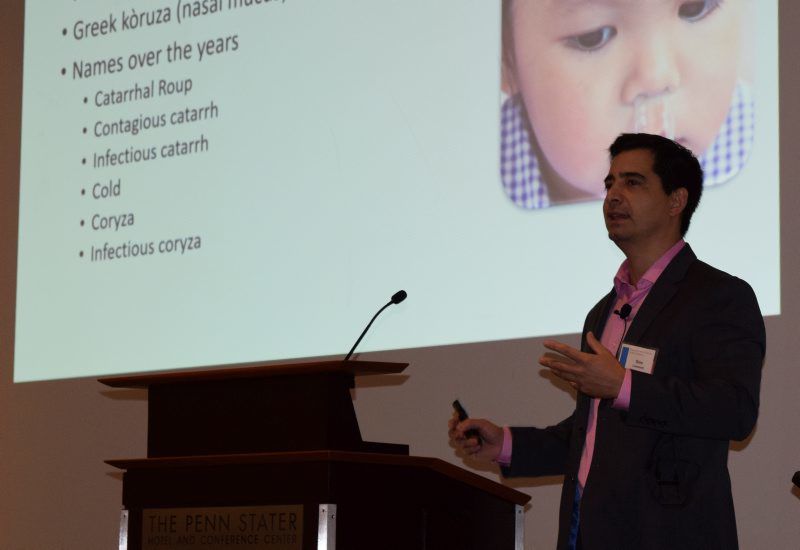 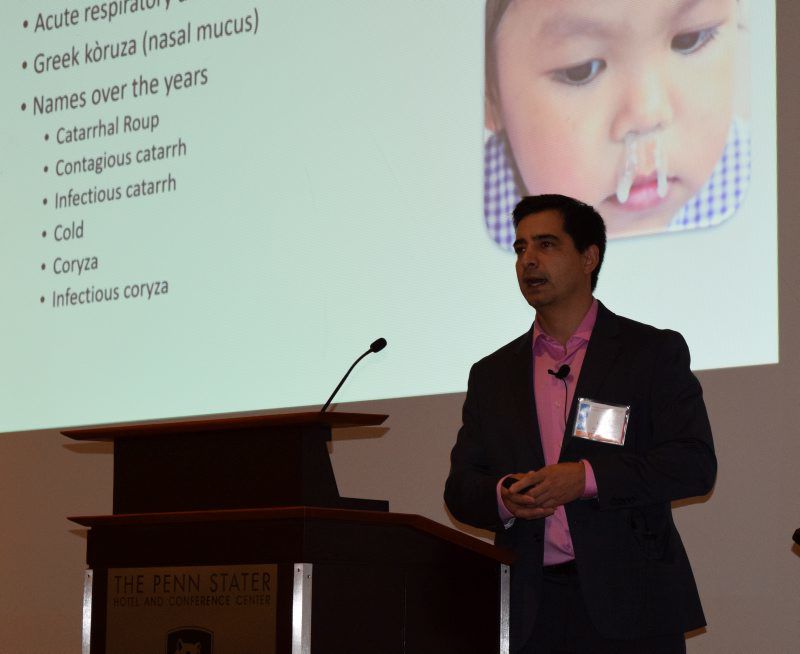 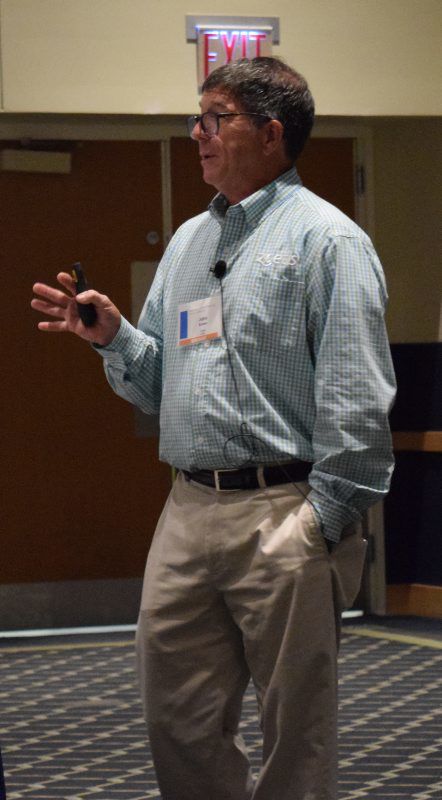 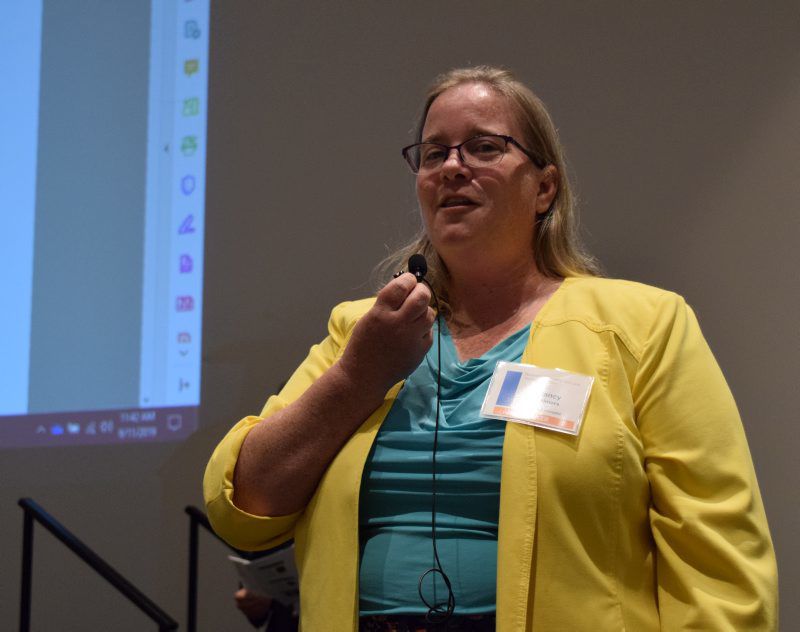 Sherrill Davison, a professor of avian medicine and pathology at the University of Pennsylvania School of Veterinary Medicine, speaks about the state's coryza outbreak.

Rodrigo Gallardo, an avian sciences professor at the University of California, Davis, speaks about coryza in his state.

Egg production dropped by a quarter, and some of his 36,000 chickens died.

The farm was the first of 59 in the state to be hit by a disease called infectious coryza. The outbreak, which peaked in March and April, affected about 14 million birds, said Sherrill Davison, a professor of avian medicine and pathology at the University of Pennsylvania.

Veterinarians discussed how coryza works — and how it can be controlled — at the Northeastern Conference on Avian Diseases on Sept. 11 at The Penn Stater.

Coryza can cut egg production by 40 to 70%, and causes facial swelling and nasal discharge.

“When I was in vet school, I learned that coryza is Greek for snot,” said Nancy Reimers of Cutler Associates International. “And that’s how this presents.”

Dirty wings can be a sign of coryza — birds wipe their runny noses on the wings as if they were sleeves — but farmers likely won’t need to wait for such signs.

“The animals are not feeling very well, as you can imagine, so dropping feed and water consumption is normally the first thing that you can detect,” said Gino Lorenzoni, a Penn State poultry health professor.

Coryza, which was clinically described in the 1930s, affects all ages of chickens, but it’s generally worse in older birds. Most of the birds in a flock will get the disease.

When birds come down with coryza alone, they can get better in two to three weeks. But coryza often appears with other diseases, which can prolong recovery and sometimes lead to death.

In Pennsylvania, two of the initial coryza cases looked like bronchitis, and the birds turned out to have both diseases. That’s one reason the outbreak proved difficult to diagnose, Davison said.

“This is the mother of all head colds. These are some of the sickest chickens you will ever see,” said Reimers, who has treated the disease in California.

Most of Pennsylvania’s coryza cases have been in Lancaster County. Layer flocks have been hit the hardest, but the disease has visited some broilers and pullet operations too, Davison said.

The first farm in the outbreak had recently had a fire in an outbuilding, and it’s possible that smoke inhalation had something to do with the disease taking hold.

In the Pennsylvania outbreak, mortality varied greatly, from less than 1% in pullets to 26% in some broiler flocks.

At the end of March, flocks started getting vaccinated. A few vaccinated flocks have since had coryza outbreaks, but few birds died, Davison said.

Vaccines are good tools for controlling coryza, though they vary in effectiveness based on the subtype of the virus being treated.

Antibiotics are also useful, but many strains of the disease are now resistant to several drugs, Lorenzoni said.

Reimers favors vaccines because it’s hard to get ill birds to eat enough antibiotics for the drugs to work.

To support the birds through the illness, Reimers suggested feeding a high-energy ration and slightly acidifying the water to promote water consumption.

Still, birds that survive coryza can become chronic carriers and keep the disease going on a farm.

That’s not such a problem in single-age flocks where all the birds are moved out at the same time and are followed by a thorough cleaning of the poultry house.

But healthy carrier birds can cause challenges for multi-age complexes, Lorenzoni said.

In California, where coryza has been a problem for decades, most of the multi-age egg farms that Reimers serves are chronically infected.

In southern California, the disease tends to be seasonal and associated with the Santa Ana winds, which may move the disease small distances.

Coryza outbreaks in vaccinated flocks are not that unusual, but the symptoms are much less severe than in unvaccinated ones, she said.

Pennsylvania’s coryza outbreak is a reminder that farms need to consider where trucks, bird moving crews and other visitors have been and how well they have cleaned beforehand, Davison said.

On several farm visits, she has noticed birds running loose or heard them near the poultry house.

“We really need to get those birds off of commercial premises,” she said.

Effective cleanup and biosecurity in Pennsylvania could keep coryza from becoming the long-simmering nuisance it has become in California.

In the summer of 2020, While the United States was struggling to understand COVID-19, California succeeded in ending a major poultry disease outbreak of Newcastle disease. The effort succeeded through a mix of public outreach and on-site disease response.