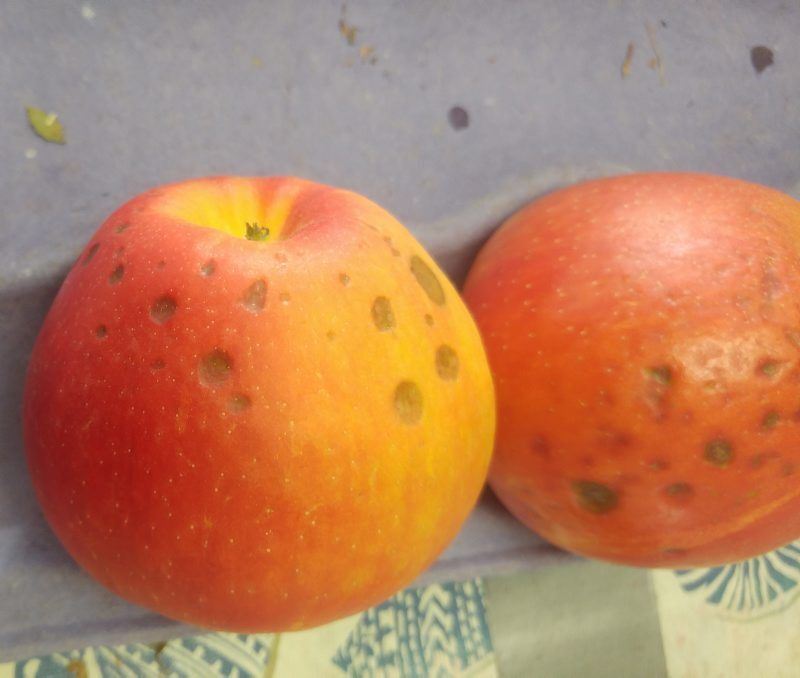 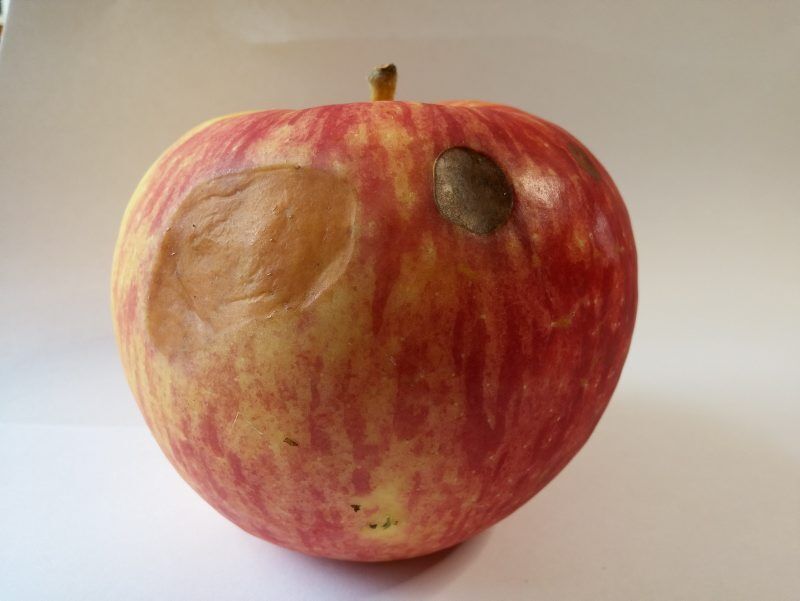 Soft scald can lower the quality of Honeycrisp harvests.

Two of Honeycrisp’s signature problems can be reduced by holding apples at the proper cold storage temperature.

In an attempt to predict bitter pit, Moran harvested apples three weeks before their predicted maturity, held them at 70 degrees for three weeks and counted the number with bitter pit.

“This helped me identify some high-risk orchards,” she said.

She experimented with conditioning apples and not conditioning before storing them at 34 and 37 degrees for three months.

Conditioning is holding the apples at 50 to 70 degrees for five to seven days before putting them in cold storage.

Moran found that conditioning reduced soft scald in some orchards, but the results were not as conclusive as she would have liked.

“It wasn’t very accurate in telling us which orchards had low and moderate amounts but helped us pick out the worst-case scenarios,” Moran said.

“I’m not recommending storage at 34 degrees because it puts apples at risk for soft scald,” Moran said. “With conditioning, 34 degrees is still too cold for Honeycrisp, and it is not cold enough to prevent soft scald.”

In a test to rapidly induce soft scald, Moran developed the “freezer test,” in which she put the apples in a programmable freezer and set it at 30 degrees. Within three weeks, the fruit started to develop soft scald. Moran said she’s sticking with her recommendation of 37 degrees for storage.

In addition to storage problems, calcium deficiency can contribute to bitter pit.

Moran said in-season calcium sprays may reduce the diseases but are not enough.

Some rootstocks impart some resistance to the diseases, but in-season management seems to offer the most promise for control, she said.

Farmers should get a peel analysis three weeks before harvest to measure calcium, nitrogen and potassium.

“Hopefully, you have results by the time you have apples ready for storage,” she said.

The average shoot should be longer than 15 inches when doing this test.

In another presentation, Glen Koehler, an integrated pest management specialist from the University of Maine, described the school’s new AgRadar weather data tool.

He said that AgRadar has operated for more than a year, but only this year has gone live for commercial services.

“We want to make sure we get it right,” he said.

The site draws weather information from the National Oceanic and Atmospheric Administration, and uses that to help farmers decide when to apply chemicals or scout for diseases and pests.

A yearlong subscription is $140 for growers outside of Maine, with extra fees for the app’s tools. Farmers may also choose the $120 option for just the growing season.

Ongoing research is studying how computerized modeling might be used to determine apple bloom thinning.

Antibiotics Protect Apples, But Do They Destroy the Native Microbiome?

Repeated use and misuse of antibiotics in humans can cause microbes to develop a resistance. Can the same thing happen in plants?