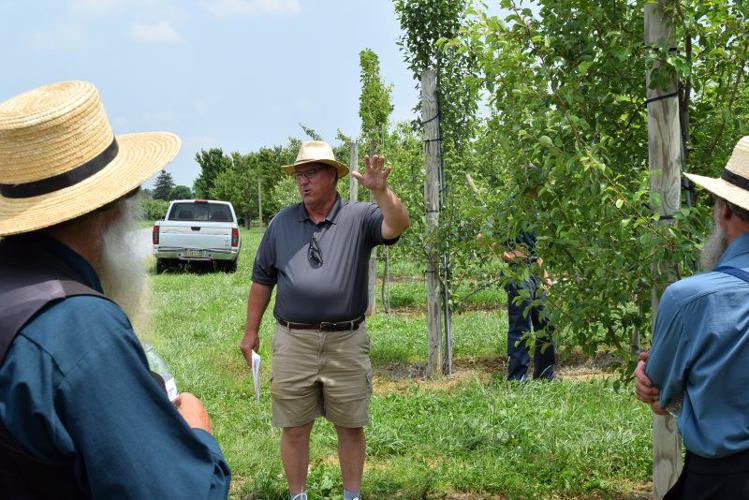 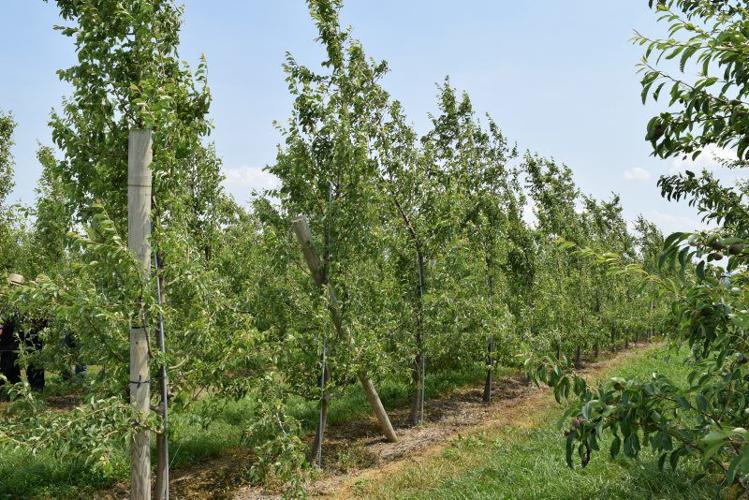 Pear trees, like these at Kauffman's Fruit Farm, can grow too tall for easy harvesting. Tree height and fire blight susceptibility are among the reasons that have limited pear plantings in Pennsylvania.

Pear trees, like these at Kauffman's Fruit Farm, can grow too tall for easy harvesting. Tree height and fire blight susceptibility are among the reasons that have limited pear plantings in Pennsylvania.

RONKS, Pa. — Pears have traditionally been a bit of a hassle for Pennsylvania tree fruit growers.

They grow too tall, they take their time coming into production, and they get battered by fire blight.

A new wave of pear varieties could address those production concerns — and they’re tasty too.

“It’s really delightful for eating fresh in the hand, and it’s crunchy, and people really enjoy it,” Jim Schupp gushed about Gem, one of his favorite up-and-comers.

Schupp, a Penn State professor of pomology, spoke at a May 29 workshop at Kauffman’s Fruit Farm, which has a high-density pear planting.

Gem and the other new varieties are all fire blight resistant, and Schupp thinks that trait could be their biggest selling point.

In his pear variety trial at Penn State’s Biglerville research farm, none of the new-variety trees he planted in 2011 has been killed by fire blight, but several of the interspersed Bartlett and Bosc trees have fallen.

The new varieties aren’t immune to fire blight, so they will develop fire blight lesions. But growers can prune out these infections and move on, Schupp said.

Today’s pear trees are still too tall to pick conveniently, but they are about 30% smaller than trees from earlier years.

“It’s a good rootstock for today. If something comes up better, jump on it with both feet,” Schupp said.

Grower Clair Kauffman is bullish about several of the pear varieties in his block, which was planted mainly in 2015.

Shenandoah, for example, is a large pear with the elongated shape of a Bosc and an intense flavor.

“It’s delicious. Let it get ripe, though,” Kauffman said.

Schupp agreed. Shenandoah has a notable amount of acidity right off the tree. Some people might like that, but even more people will like the rich flavor that remains after the acidity declines, he said.

Shenandoah and Harrow Sweet, another variety Kauffman likes, were two of the best late-ripening pears in a taste test Schupp held a few years ago.

Testers rated Harrow Sweet as more attractive than Bartlett, the industry standard, but some people thought the new pear’s texture was a little dry.

After eating plenty of Harrow Sweets in the years since the test, Schupp thinks he might have just harvested that crop a little early.

Saying a variety meets or exceeds Bartlett’s standards isn’t a knock on the centuries-old icon.

“To have a couple that actually taste better than Bartlett is very high praise,” Schupp said.

Since 2011, Harrow Sweet has been Schupp’s most productive variety and the one with the strongest annual bearing pattern.

Pears can be biennial bearers, meaning they vacillate between big and small crop years — an annoyance for farmers.

Two varieties developed by USDA stood out among the early-ripening pears — Gem and a yet-unnamed variety.

For a pear, Gem is unusually flexible in its harvest date.

If picked at the beginning of its window, around Aug. 17, it’s crispy and sweet. If it hangs for an extra 10 days, it turns yellower and gains an appealing complexity of flavor. It also stores well, Schupp said.

Bartlett and other varieties tend to get soft if they hang too long.

For the new varieties, “it’s a little bit by guess and by golly right now,” Schupp said.

It’s also anyone’s guess when Gem will be widely available.

When USDA started distributing the budwood for Gem, a latent virus was discovered. The wood is being treated to get rid of the virus, but that’s time-consuming work, Schupp said.

Still, he hopes that process will be done soon enough.

The X factor among new pear varieties is Magness. The tastiest of the USDA varieties, it’s also one of the most difficult to get to produce fruit.

Schupp is considering doing research on how to get Magness to come into production, but for the time being, he said, growers should focus on the other new varieties that produce fruit more reliably.