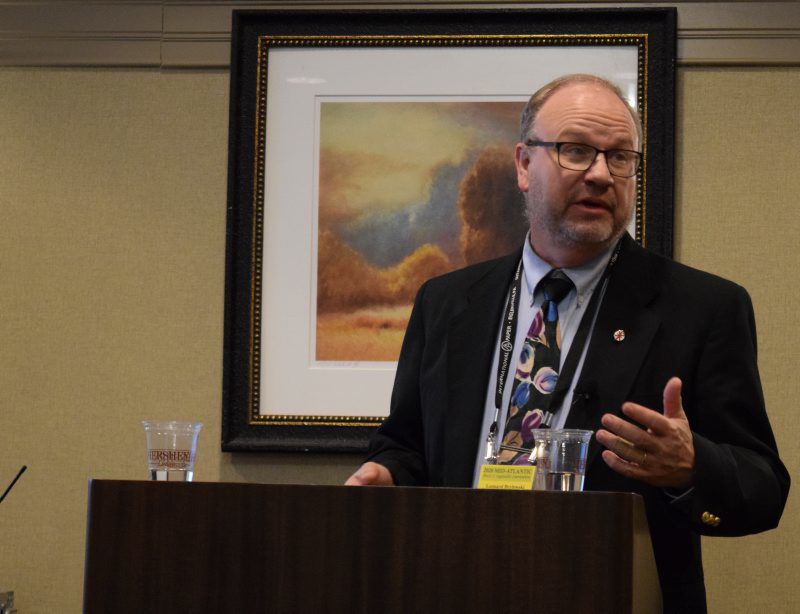 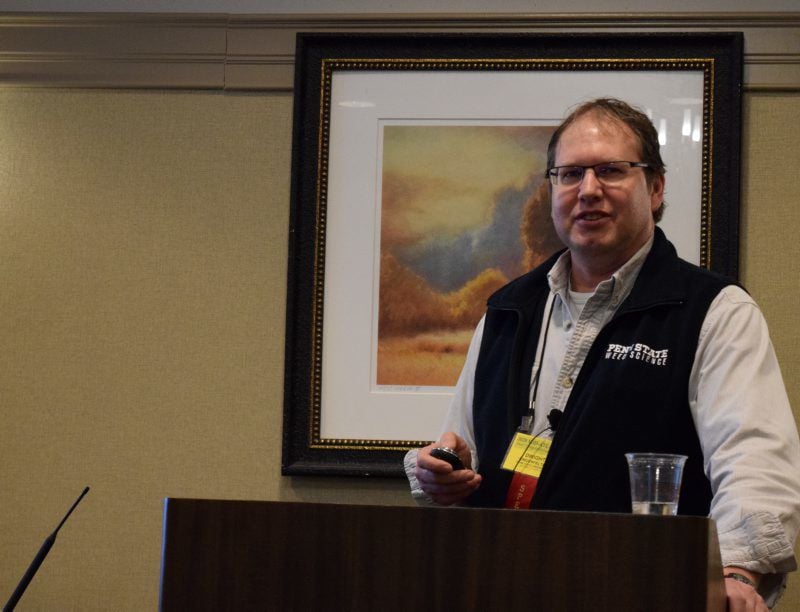 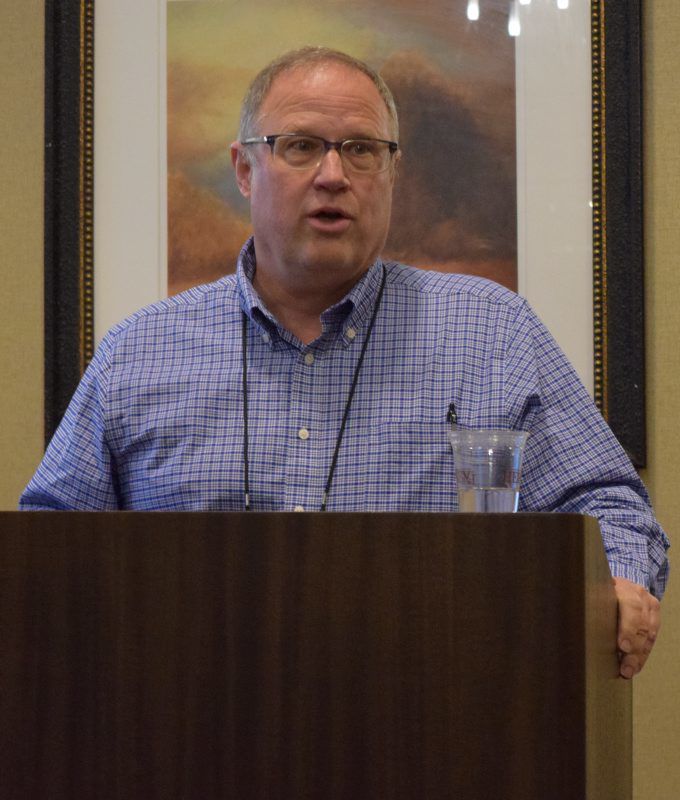 The perpetrators haven’t set foot in his vineyards, and they’re not even aware of the damage they’re causing at the time, but in just four years they’ve cost Shrawder $1.5 million in production.

The damage comes from herbicide drift, when a weedkiller is sprayed and the ultrafine droplets waft away before landing on the targeted plant.

And judging by the show of hands at the Mid-Atlantic Fruit and Vegetable Convention, where he spoke on a Jan. 30 panel discussion, Shrawder is not the only vineyard grower in the region who has been burned.

Concern about herbicide drift has spiked over the past few years as chemical companies have introduced new grain varieties resistant to dicamba, a common herbicide that can drift if not applied under just the right conditions.

The new dicamba products used in these systems are formulated to reduce drift, and applicators must go through training to use them. Arkansas has placed severe limitations on dicamba use after numerous drift complaints there.

Yet Shrawder said drift problems have persisted at his vineyard, Stony Run Winery in Kempton.

Spray drift causes grape leaves to pucker, fruit to abort, and vines to alter their growth patterns in undesirable ways. Plants hit with just a few parts per billion of herbicide can sink into slow, terminal decline. Pinot noir, merlot and chardonnay are the most sensitive varieties.

“We’re at the point where, as the vineyards die, we’re ripping them out, and we’re not going to be replanting until something improves,” Shrawder said.

Grapes are far from the only crop that can be ruined by herbicide drift. That list includes tobacco, tree fruit, vegetables and soybeans that don’t have herbicide resistance traits.

Still, plant growth regulators like dicamba, 2,4-D and triclopyr remain common, and are used by lawn-care companies and right-of-way managers in addition to grain growers.

As problematic as these herbicides can be, grain farmers have good reasons for using them.

They’re effective and relatively cheap, while tillage, the most obvious alternative to spraying, increases erosion while reducing soil organic matter.

On top of that, no novel herbicide mode of action has come out in over 25 years, meaning farmers are more or less stuck with the chemicals on the market now, said Dwight Lingenfelter, a Penn State weed scientist.

Shrawder isn’t convinced. He grows some corn, soybeans, small grains and alfalfa in addition to the grapes, and said he’s doing just fine without the high-risk herbicides.

“As grape growers, we have the chemicals we need to safely grow our crops, and if the corn and soybean growers don’t have the chemicals, they need to work on it,” Shrawder said. “The solution is not to just write off the grape industry in Pennsylvania.”

To reduce the risk of herbicide damage on nontarget crops, growers can register their location on DriftWatch (pa.driftwatch.org) so that applicators know the sensitive crops are there.

Shrawder also recommends giving notice of the vineyard’s existence to everyone within 4 miles who might be spraying problem herbicides.

Still, education is not a perfect solution. Shrawder said he seems to explain the risks of drift to a new person every year.

At this point, Shrawder encourages grape growers who have herbicide damage to sue early and aggressively. He has held off from filing a lawsuit for four years but wishes he hadn’t.

“Next guy that gets my vineyard has volunteered to be an example for everybody else,” Shrawder said.

Still, Shrawder has found agricultural attorneys can be hesitant to take herbicide cases, possibly because they fear alienating other farm clients.

“Vineyard owners are pretty much a pariah once you start complaining about drift,” Shrawder said.

Herbicide drift damage can also be reported to the state Ag Department. The agency can’t seek damages for the injured grape grower, but it can penalize applicators who violate herbicide regulations.

To maintain the chain of custody, the state must collect its own samples, but if the grower wants to submit additional material to a private lab, the inspector can prepare a second sample in a sealed bag, said Leonard Brylewski, who investigates drift complaints at the agency.

Growers should report suspected drift damage as soon as possible. Some damage can take two weeks to appear, by which time the spray chemicals may be largely gone from the plant.

“Not finding stuff when you look can cause people to get cocky and think that they’re not causing problems and just go do it again,” Shrawder said.

What can grain growers do to avoid toasting their neighbors’ crops?

For one thing, Lingenfelter said, grain farmers should choose a low-drift formulation. Choline salts of the herbicides generally pose a significantly lower drift risk than older ester or amine forms.

Farmers can also use drift-reducing adjuvants, but they may want to omit ammonium sulfate. The additive increases herbicide efficacy but makes dicamba more volatile and likely to drift.

Farmers can also lower the boom height, spray at times with little wind, and use spray nozzles that put out large droplets that aren’t likely to float away, Lingenfelter said.

Shrawder worries that even careful application may not be enough. He’d prefer grain farmers not spray plant growth regulators within 4 miles of a vineyard after the grapes’ bud break in the spring.