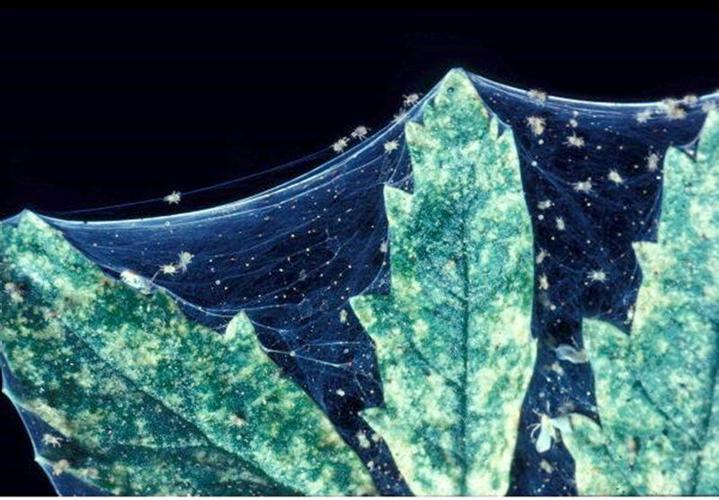 Two-spotted spider mites and their webbing, which allows them to disperse when populations are high. 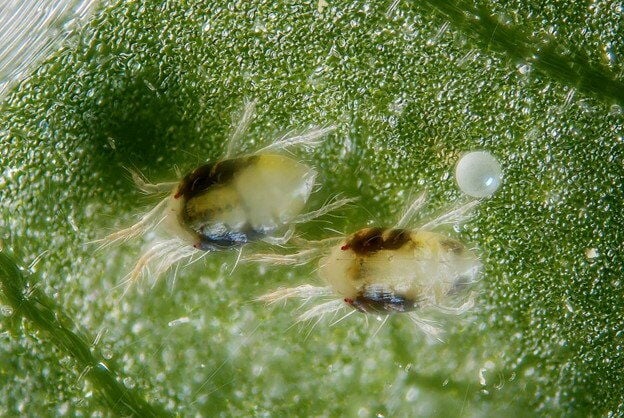 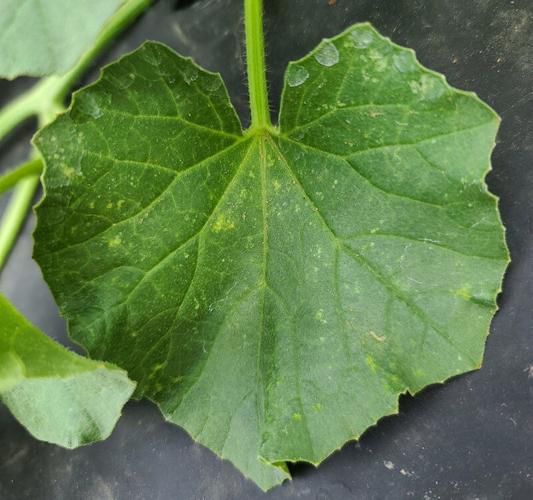 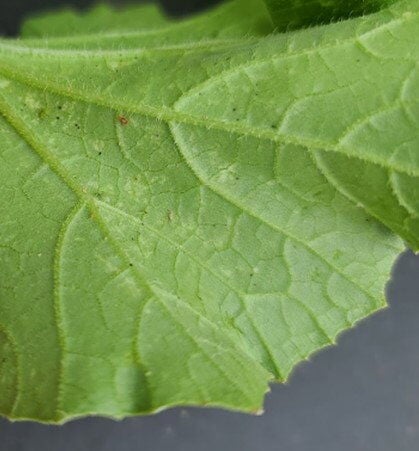 Spider mites appear very tiny on the underside of a cantaloupe leaf.

Spider mites are tiny arachnids that can have a big impact on our gardens and farms.

They measure less than 1/50th of an inch and have eight legs. Two-spotted spider mites, one of the most common species we encounter in southern Pennsylvania, will be a cream color with two dark patches on either side of the abdomen. Immature mites will be similar in appearance but even smaller and may not have the dark patches.

Overwintered females will become active in April or May in our area and lay small spherical eggs on the underside of plants, which then hatch into immatures.

Both immatures and adults contribute to feeding damage. Often, we see their damage long before we notice the mites on leaves.

As they feed, they remove chlorophyll from leaves, which is what gives plants their green coloring. Thus, their feeding damage appears as a yellow stippling. As damage worsens, leaves can become very pale, dry out, and fall off.

Many species are able to produce silk webbing and will use this silk to disperse to new host plants, so you’ll see their webbing forming on plants when populations are high.

They feed on a wide variety of different plants from over 300 species, including vegetables, ornamentals and fruit crops, and can be particularly problematic in greenhouse and high tunnel crops.

Two-spotted spider mites are most common when weather is hot and dry, so we have been seeing more and more of them in the past few weeks here in southern Pennsylvania.

In hot weather, they can complete their life cycle in as few as five days, allowing populations to increase rapidly. They also thrive when feeding on stressed plants. If you see yellow stripping on leaves, monitor for spider mites either by using a hand lens to inspect the underside of leaves or tapping the plant over a sheet of white paper and inspecting the paper for mites.

Because spider mites thrive on stressed plants and can feed on so many hosts, improving plant vigor and managing weeds are two key cultural tactics to prevent spider mite problems on plants.

Predatory mites, particularly from the family Phytoseiidae, can be effective in indoor greenhouse settings if released early, before populations have increased. They do best if greenhouse humidity is kept above 70% and do not work as well in open environments. They are best used early in the spring for high tunnels.

There are also many naturally occurring predators of spider mites that can provide control on outdoor crops, including lady beetles, minute pirate bugs, and predatory mites. Avoiding the use of broad-spectrum insecticides, such as pyrethroids and neonicotinoids, can help conserve these natural enemies and provide better biological control.

For low-toxicity chemical options to control them, horticultural oil, neem oil, or insecticidal soap can work if good coverage is achieved. If growing a flowering crop, avoid getting oil on the flowers as this can damage them.

For commercial producers, miticides containing abamectin, such as AgriMek SC or Avid, or a number of other products such as Zeal, Onager, Kanemite, Magister, Portal or Oberon work well. Always consult the label and ensure the product is labeled both for the crop you plan to control spider mites on and the environment in which you plan to apply (greenhouse/tunnel versus field). Products labeled for field vegetables often differ from greenhouse vegetables.

An expert explains how using unnecessary insecticides can result in an army of tough to manage pests.