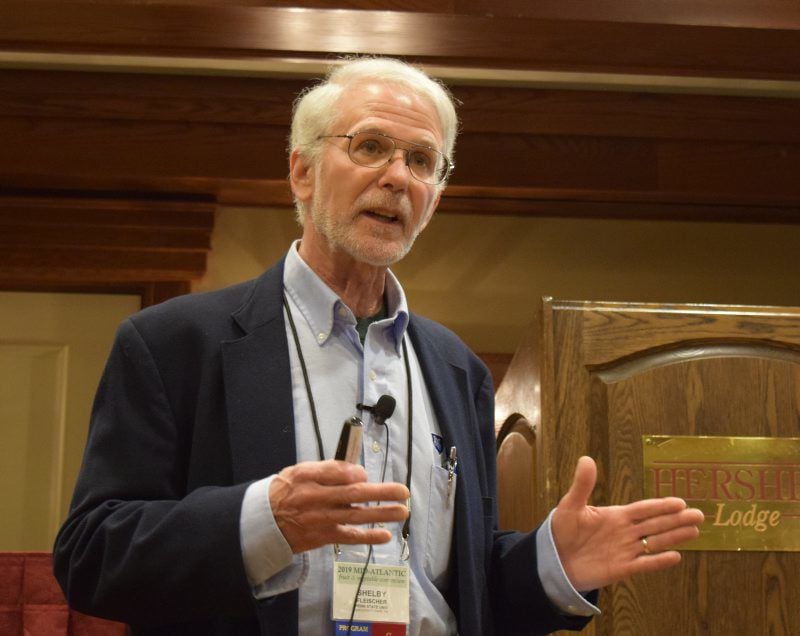 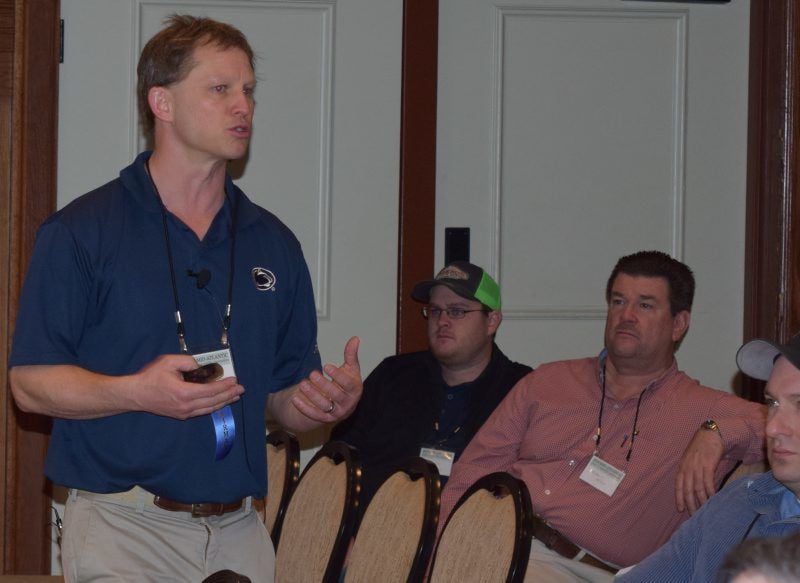 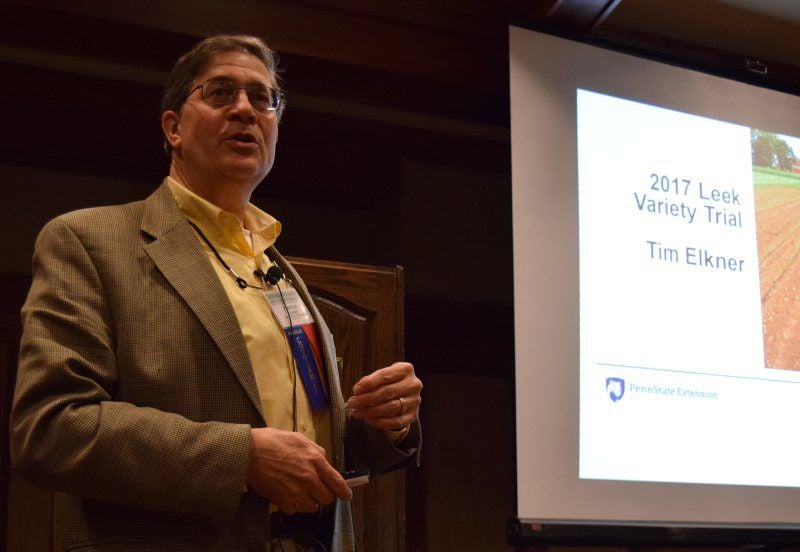 Tim Elkner, a Penn State Extension educator, speaks about a leek variety trial he conducted in 2017.

Tim Elkner, a Penn State Extension educator, speaks about a leek variety trial he conducted in 2017.

HERSHEY, Pa. — Onion and leek growers are in an interesting position right now.

They have an odd invasive pest, the allium leafminer, on their hands.

But they also have many attractive leek and onion varieties to choose from.

Penn State researchers spoke about these challenges and opportunities at the Mid-Atlantic Fruit and Vegetable Convention on Tuesday at the Hershey Lodge.

Native to Poland, the allium leafminer was first found in Lancaster County, Pennsylvania, in December 2015. It is now found in much of the Mid-Atlantic.

The pest attacks all plants in the allium family, including onions, leeks, chives, ramps and wild garlic.

Females puncture the leaves for feeding and egg laying during the pest’s spring and fall active periods.

“I’ve never worked with one like this before,” said Shelby Fleischer, a Penn State entomologist.

Ideally, farmers could outsmart the leafminer by planting after the flight stops or harvest before the next one begins.

But nailing down that timing has proved difficult because the pest’s unusual life cycle makes it difficult to rear in the lab.

“We’re still figuring out a lot of details on this,” Fleischer said.

He’s also trying to explain how the leafminer picks its host plants.

Fleischer has consistently found more leafminer marks on scallions than leeks, but that hasn’t translated to higher populations on scallions.

“They seem to develop well on leeks,” he said.

In some cases, leafminers seem to prefer younger plants, while in other settings, they go for older plants.

In Candy onions, almost all of the leafminers have been found dead in the papery outer leaves.

Fortunately, growers have a number of effective control options.

Scorpion and Exirel have worked well as foliar applications, though they didn’t do as well when delivered via drip irrigation.

Cornell researcher Brian Nault tried dipping the bottoms of the transplants in Entrust.

That more or less knocked out the leafminers, but it’s not clear why. Also, that treatment is off label, Fleischer said.

Fleischer’s team has found seven parasitoids that go after the leafminer.

After corresponding with USDA researchers in France, he thinks one of the parasitoids might be a European species.

It would be “really exciting” to have a parasitoid from the leafminer’s home continent, Fleischer said.

All of this research on a leek pest inspired Extension educator Tim Elkner to do a variety trial on the crop.

“No one had looked at leeks for a while,” he said.

Leeks are set deep and hilled to create the coveted white shank.

Elkner preferred foliage that stood up instead of fanning out. Sprawling leaves were easier to damage when hilling.

Tadorna seems to be the most popular leek variety among Lancaster County growers.

It produced fairly uniform leeks, which is nice because leeks are generally sold in bunches, Elkner said.

A master gardener who is a retired chef helped with the research, and Elkner invited him to try cooking with the leeks.

The man raved about cooking with American Flag, a standard variety that is mostly used for gardening nowadays.

Direct-marketing growers might be able to sell that cooking appeal.

Still, American Flag produced one of the lowest percentages of marketable leeks and some of the smallest leeks by weight in the trial.

American Flag also had the most bulb development, a trait wholesalers don’t like in leeks.

There’s nothing wrong with bulbing leeks, so they could be fine for direct marketing, but “if you’re a wholesale marketer, don’t go near that beast,” Elkner said.

Along with American Flag, King Richard was one of the greenest varieties.

A relatively old variety, King Richard is traditionally planted in the spring and pulled early as green leeks. “That’s a quickly marketed one,” Elkner said.

If a grower wants to overwinter leeks, varieties with darker blue leaves, such as Lexton, Lancaster and Comanche might be better, he said.

Extension educator Tom Butzler found plenty to like in his 2018 onion trials.

The onions were transplanted May 7 and harvested between Sept. 8 and 24. They were harvested when roughly half of the tops were folding down.

Some growers let onions air dry for a couple days, but last year’s plentiful rain prevented Butzler from doing that.

“We had to get them out. Things were getting kind of swampy there,” he said.

Instead, the onions were dried on wire mesh benches in high tunnels.

Among yellow onions, Candy produced the largest yield at more than 15 tons per acre.

Because of difficulty getting seeds, this was the only variety Butzler didn’t start from seed.

Yukon had the largest average bulb size, and Mondella had the highest percentage of large bulbs, almost 70 percent.

Among red varieties, Red Hawk was tops in yield, average size and percentage of large bulbs.

Cherry Mountain produced a particularly vivid red that carried through to each layer of the onion.

Cabernet produced fairly small bulbs, but some growers could turn that into a marketing advantage.

A big bulb could be too much onion for a one- or two-person household, Butzler said.

Rossa di Milano has an unusual tapered shape and pink skin, so it could add some pizzazz to a market display.

But almost all of these onions had a double center, which might not be desirable.

And the pink color doesn’t go very deep, so it wouldn’t be an eye-catching choice for fresh salads, Butzler said.

Most of the onions met expectations for having a mild, sweet taste.

“We don’t want onions that are very pungent,” Butzler said.

The Mid-Atlantic Fruit and Vegetable Convention ran Jan. 29 to 31. More coverage will be in next week’s paper.