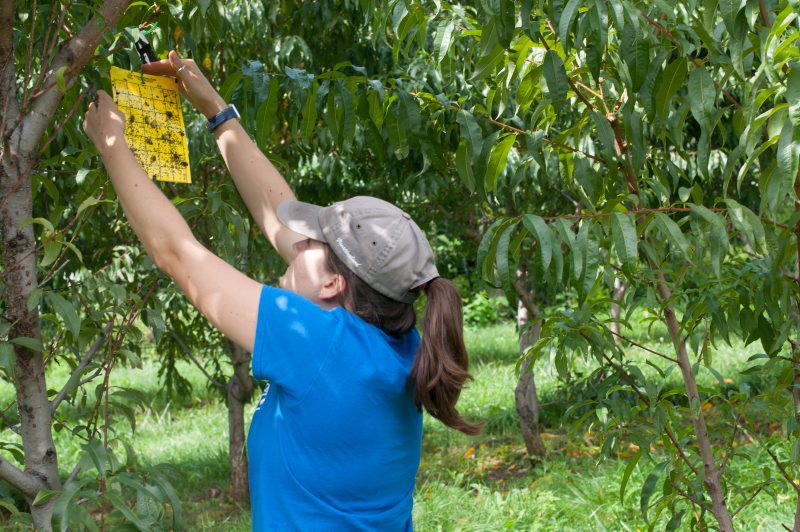 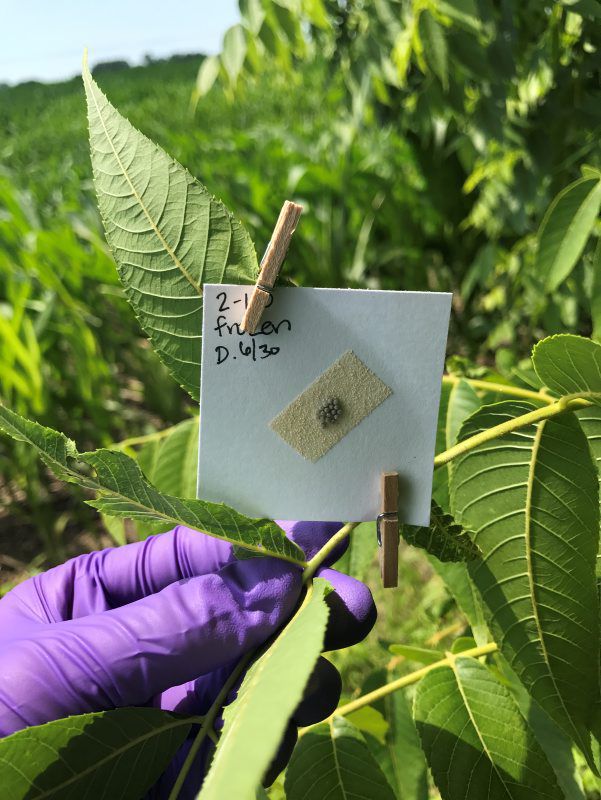 A stink bug egg mass is deployed in the field.

A stink bug egg mass is deployed in the field.

A major natural enemy of the destructive brown marmorated stink bug has been found in Pennsylvania, but don’t expect pest pressure to lessen any time soon.

Researchers have had their eye on the samurai wasp for several years now.

Despite its fierce name, the samurai wasp doesn’t do battle with adult stink bugs.

Instead, it lays its eggs in the stink bug eggs and destroys them.

Other Trissolcus wasp species are native to Pennsylvania and do a good job controlling native stink bugs, but these wasps haven’t developed the samurai wasp’s taste for the brown marmorated invader.

The samurai wasp was the star among several parasitoid species USDA collected in Asia and brought to Delaware for quarantined testing.

The agency hasn’t been able to release the wasp, however, because it also attacks the spined soldier bug, the region’s only known native predatory stink bug, said Extension entomologist Greg Krawczyk, who is Morin’s adviser.

In 2014, though, U.S. researchers started finding samurai wasps in the wild.

The wasp has now been found in low numbers in every state in the Mid-Atlantic, plus Virginia, West Virginia, Washington and Oregon.

Because of regulations surrounding foreign organisms, researchers are allowed to work with the samurai wasp only after it appears in their state.

And now that the wasp is in Pennsylvania, research is exactly what Morin and Krawczyk hope to do.

This year’s work will build on Morin’s 2017 fieldwork on stink bug egg parasites.

Morin caught the samurai wasp on a yellow sticky card, which some researchers have used to catch similar wasp species.

Now Morin is going through the sticky cards, identifying the species she caught and looking especially for the samurai wasp.

Handling a wasp that’s one-third the size of a grain of rice is a delicate process.

The insects have to be preserved in ethanol, then glued to a small triangle of paper and put on a pin. The goal is to manipulate the wasp without actually touching it, Morin said.

And the distinctive features can be minute. The samurai wasp has four hairs on its face, while Trissolcus species native to Pennsylvania have two.

To verify her discovery, Morin mailed the samurai wasp to Elijah Talamas, a Trissolcus expert who was then working for USDA.

At Cherry Hill Orchards and an organic orchard in Fairfield, Morin placed stink bug egg masses in the middle of orchard blocks, on orchard edges and in the woods.

Each location could have a different mix of enemies, she said. Some of the eggs were less than 24 hours old — farm-fresh eggs from an insect farm.

Other egg masses were frozen, collected on days when the stink bugs produced too many for Morin to use all at once.

In the fresh stink bug eggs, the wasps may encounter stink bug defenses they haven’t seen before and die. The dead, frozen eggs can’t put up any resistance.

As a result, the frozen eggs can show what kind of parasitoids are in the area, but they don’t reflect what would really happen in nature, Morin said.

After 72 hours, she brought the eggs back to the lab and waited to see what hatched.

Morin didn’t have to wait long to see if the stink bugs survived — they emerge in less than a week — but the wasps can take a month or more to hatch.

Some wasps did in fact hatch, but never a samurai wasp.

Still, Morin fed them a honey-water mixture, similar to the nectar they would eat in the field, in hopes of growing their numbers.

That proved difficult, as the wasps die if the humidity gets too high.

Morin has talked with technicians from other labs and hopes to try again this year.

She will also begin this summer with new questions, such as what the samurai wasp was even doing in an orchard block where stink bugs might not have been present.

Morin is still going through her yellow sticky cards, so it’s possible that she will find more samurai wasps.

Still, Krawczyk cautioned against getting too excited about discovering the insect in Pennsylvania.

Samurai wasps have only been found in low levels in the U.S., and Morin has found but a single specimen.

The wasps will need years to build their populations — maybe five or 10 before they affect farmers’ management.

And the wasps will have to grow in the woods, out of reach from farm insecticides.

“I’m happy about it, but I know that it will take a long time before this wasp will become distributed enough,” Krawczyk said.