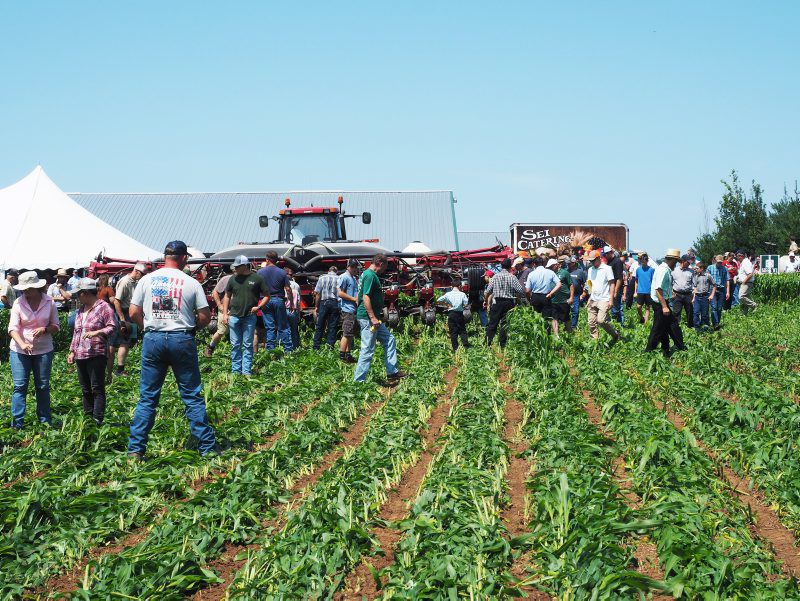 There were about 250 attendees at the Pennsylvania No-till Alliance July 25 field day at Hershey Farms near Elizabethtown. Here some of the farmers check on the performance of a 12-row no-till planter after it rolled through a demonstration cover crop of sorghum sudangrass. 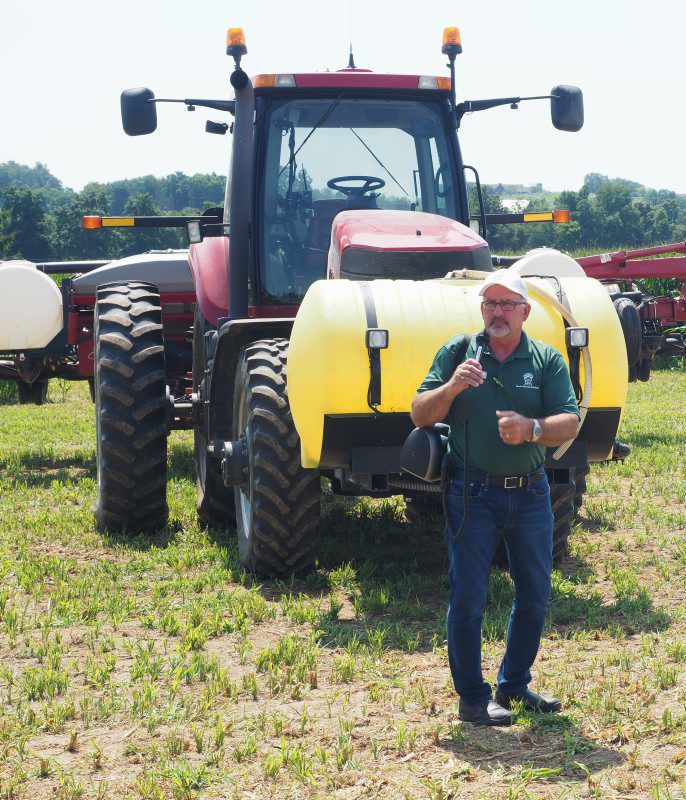 Jim Hershey, president of the Pennsylvania No-till Alliance, sponsored the alliance's 2019 soil health field day at his farm near Elizabethtown. 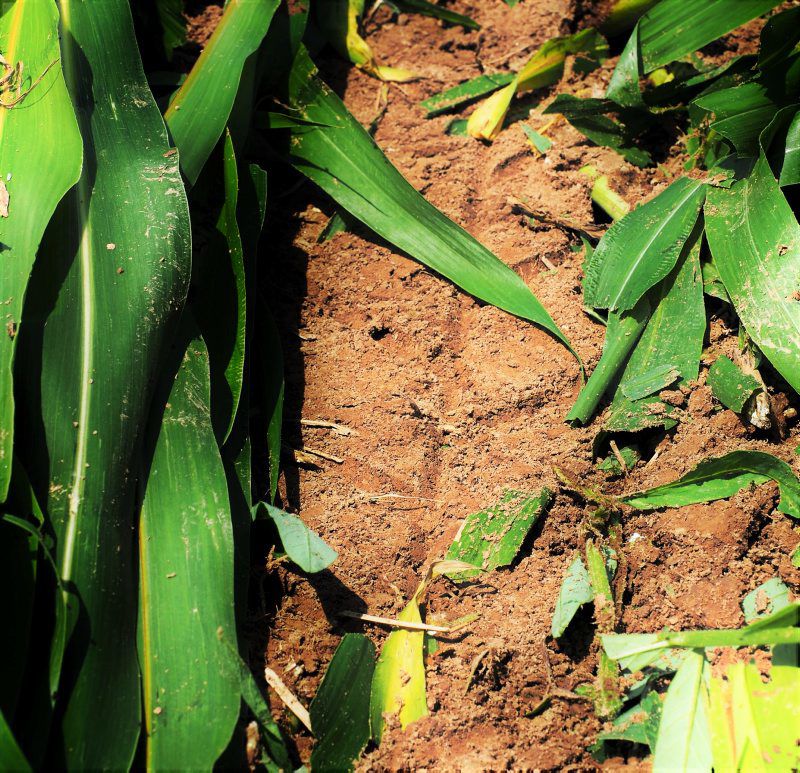 This seed trench behind the 12-row Case IH 1240 no-till planter is about as zipped up as it can get.

This 12-row Case IH 1240 no-till planter was used in a green planting demonstration during the Pennsylvania No-till Alliance soil health field day at Hershey Farms near Elizabethtown. It is shown working in a plot of sorghum sudangrass. 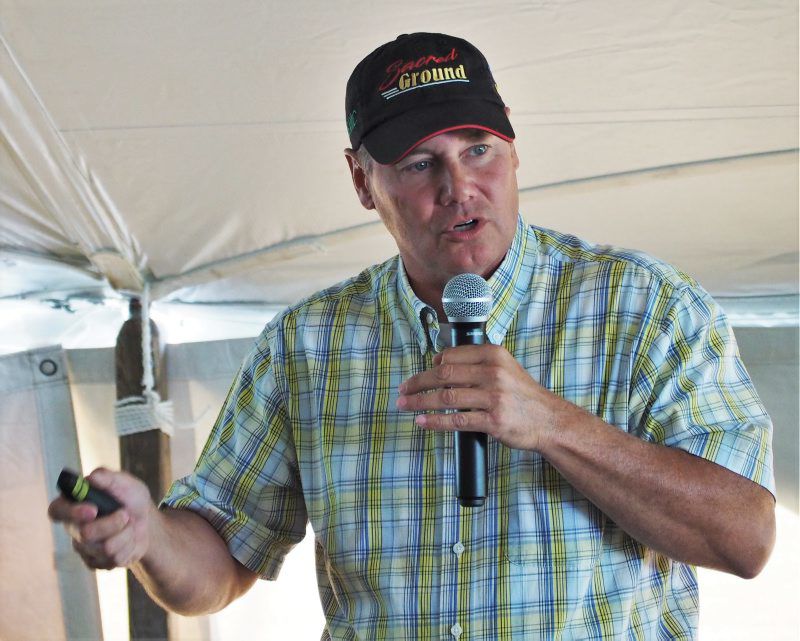 Rick Clark is an Indiana farmer who, along with his father and nephew, farms 7,000 acres of corn, soybeans and wheat using no-till and green planting methods. His presentation at the Pennsylvania No-till Alliance July 25 field day had just about every seat in the main tent occupied. 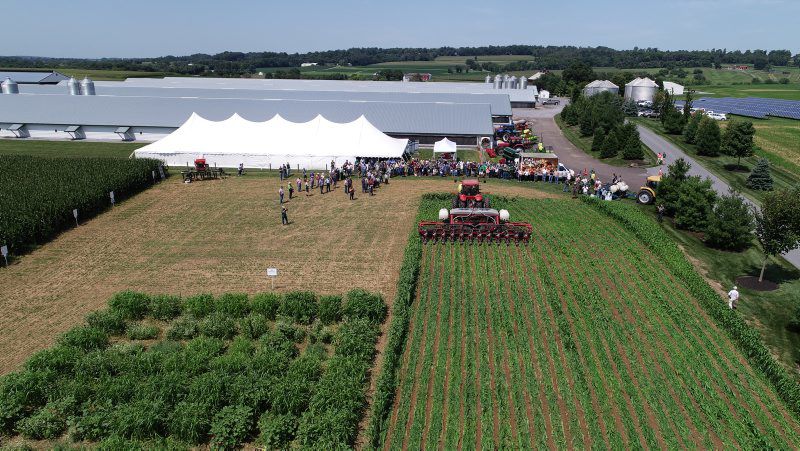 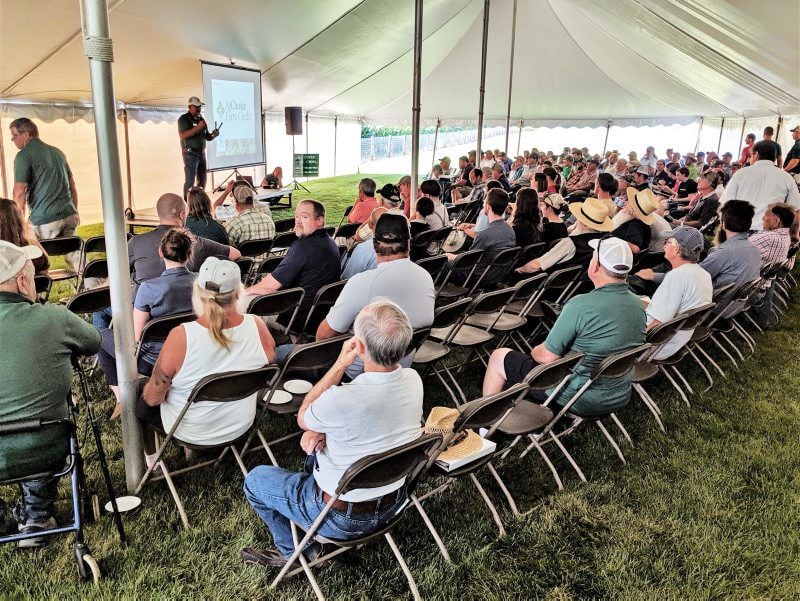 Rick Clark is an Indiana farmer who, along with his father and nephew, farms 7,000 acres of corn, soybeans and wheat using no-till and green planting methods. His presentation at the Pennsylvania No-till Alliance July 25 field day had just about every seat in the main tent occupied.

There were about 250 attendees at the Pennsylvania No-till Alliance July 25 field day at Hershey Farms near Elizabethtown. Here some of the farmers check on the performance of a 12-row no-till planter after it rolled through a demonstration cover crop of sorghum sudangrass.

Jim Hershey, president of the Pennsylvania No-till Alliance, sponsored the alliance's 2019 soil health field day at his farm near Elizabethtown.

This seed trench behind the 12-row Case IH 1240 no-till planter is about as zipped up as it can get.

ELIZABETHTOWN, Pa. — Rick Clark has saved a boatload of money by keeping his soil happy.

Clark, who with his father and nephew farms 6,000 acres of non-genetically modified corn, soybeans and wheat in Williamsport, Indiana, detailed his approach at the Pennsylvania No-Till Alliance field day on July 25.

The event, held at the farm of alliance President Jim Hershey, drew about 250 people, mostly like-minded farmers who spent the day learning and networking.

There were morning and afternoon farmer panels, demonstration plots for a variety of cover crops, a planting green demo, and a visit from Pennsylvania Secretary of Agriculture Russell Redding.

Clark told a tent full of his fellow no-tillers that he’d spent part of Wednesday checking moisture probes on his decidedly non-rolling hills, where the slope ranges from zero to two degrees.

“So some of what I’m doing in Indiana might not apply to your terrain,” he said.

Safe to say, moisture probes are probably not much affected by slopes.

The probes he uses are made specifically for irrigators who need to know when to turn the sprinklers on. Clark figured the probes would be a good way to find out how deep his corn and bean roots are reaching into the soil.

This is his first year for moisture probes and it seems likely he’ll incorporate the numbers he collected into the database he uses to keep track of how well his no-till, cover cropped, green planting, environmentally friendly approach to cash cropping is working.

According to his numbers, it is working very well. He added green planting to his no-till philosophy three years ago.

He often plants corn and beans through a living cover crop of cereal rye.

Before he plants through cereal rye, Clark knocks the cover down with a roller crimper. Do that at the right time, he said, and the rye stays down.

The right time is anthesis, which is after the mature heads have dropped most of their pollen. Roll it too early, and the stalks will pop back up.

When it stays down, cereal rye covers the ground and keeps soil moisture from evaporating. The mat of rye biomass keeps weeds from growing. And the nutrients that the rye has sequestered while it’s growing become available to the cash crop.

Of course, Clark has measured the sequestered nutrients at various stages of cereal rye growth. He harvested 2-foot square plots of the cover at three different stages of maturity.

He bagged his specimens and shipped them overnight to a lab for analysis.

At 12 inches high, his tests showed that cereal rye growing on his land sequestered 82 pounds of nitrogen to the acre.

At 28 inches, about 10 days later, it had sequestered 134 pounds of nitrogen. The findings for potassium and potash were similar.

Clark’s conclusion from this data was that he should hold off planting cash crop until his cover crop reaches a stage where it delivers the most bang for the $25 or so he invests in the seed to plant it.

Clark’s strategy has allowed a startling reduction in the cost of inputs.

In the first seven years of his aggressive, data-driven approach to no-till and green planting, the Clark operation burned half the diesel fuel in 2018 than it did in 2011.

In the same time period, horsepower needs declined 64.2%, synthetic nitrogen went from 220 pounds to the acre to 110, MAP use went down 91.8% and he stopped applying potash and lime completely. His chemical cost for 2018 was $18 per acre and he ballparked $5 for this year.

For his size operation, the input savings last year added up to $632,000. And the savings keep going year after year, he said.

Another bit of science he tried two years ago seems to be working. He set traps for cutworms in the fields in February, about the time cutworm moths are starting to migrate north. If he plants corn at about the time the moth migration is at its peak, about the middle of May, the crop should be strong enough to resist a second migration wave.

His numbers tell him he needs no starter fertilizer, no fungicides, no seed treatments and no insecticides.

His numbers also tell him he needs to keep a close watch on what he’s doing.

“This isn’t an easy way to farm,” he told his fellow farmers.

His production philosophy isn’t so much about yield as it is about stewardship and soil health. Clark said he will sacrifice yield to maintain soil health. He gave an example:

A year or two back, an armyworm infestation hit his corn crop in the V2 stage, just after it had emerged. It was May 18. One morning he had a field of baby corn. The next morning it was gone.

A friend whose ideas about farming were more conventional than Clark’s saw him crawling around in the field, looking at the damage. His friend told him you’ve got to load up with pyrethroids right now.

Clark said no. The growing point was still in the ground. It’ll come back, he said.

A week later it did come back, a nice even stand that was maybe better than it would have been without the armyworm invasion.

The point wasn’t so much the cost of spraying the crop, Clark said. The point was that if he had killed the armyworms he would also have killed another 750 beneficials &tstr; microbes, worms and insects &tstr; that abound in a healthy soil and, in his view, keep it healthy.

It’s taken a while for Clark to get to where he is now, and he’s determined to continue his outlier role as a soil steward.

“If I lose my soil health, I’ve lost it all. I think by reducing inputs and reducing chemicals and by being a no-till farmer and a cover crop farmer and being a good steward and not being on the land until it’s fit ... all those things build soil health.

“If I lose any of that, I’m going to have to start over. Bring potash back. Bring DAP back until I get my system back to where it can stand on its own again.