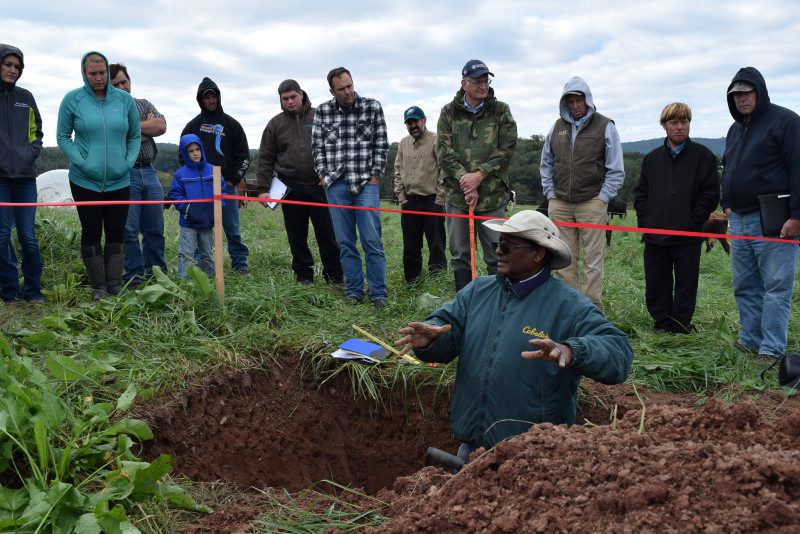 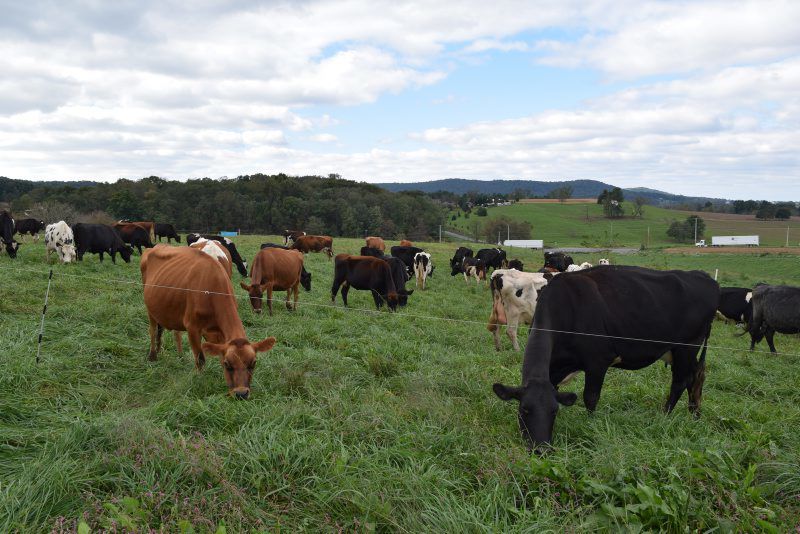 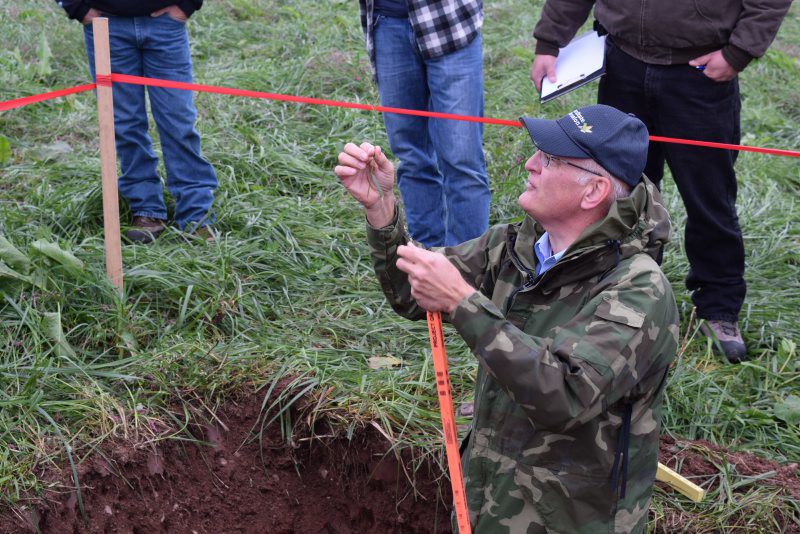 Grasses are best grazed before their stems harden to hold up the head, says Dave Wilson, a Penn State Extension educator.

Grasses are best grazed before their stems harden to hold up the head, says Dave Wilson, a Penn State Extension educator.

NEWMANSTOWN, Pa. — The first thing Kefeni Kejela noticed about the pasture soil was a problem spot.

He was standing in a soil pit — really a waist-high trench — dug to look at the layers of the soil and the depth of the plants’ roots, but the difference he saw was obvious aboveground.

The healthier soil grew typical, lush pasture grasses, but the lower-quality area was covered by curly dock, a broadleaf weed related to rhubarb.

“The soil gets mad at us because we mismanaged,” said Kejela, a soil conservationist for the USDA Natural Resources Conservation Service.

He spoke at a Lebanon County Grazing Network field day on Oct. 12 at Sandy Springs Farm.

Soil can get angry, Kejela said, when farmers cause compaction or allow the pH to drift far from the ideal range of 6.5 to 6.8.

At that slightly acidic sweet spot, nutrients are most accessible to the plant and nitrogen-fixing bacteria called rhizobia are most efficient.

“We can spend the money for fertilizer, but pH keeps (nutrients) available,” said Dave Wilson, a Penn State Extension educator.

But if pH and fertility dictate the soil’s mood at a given time, the percentages of sand, silt and clay might be the soil’s personality, which stays basically the same over decades.

“We could change that on a football field or a golf course,” but not on a farm, Wilson said.

The soil on the host farm is a type of channery loam found throughout the ridge-and-valley region of Pennsylvania, Maryland and West Virginia. It isn’t known for being especially deep, Kejela said.

“These were all woodlands at one time, so they weren’t the deep prairie soils like we have in the Midwest,” Wilson said.

To make the best of these Mid-Atlantic soils, farmers should take care of the beneficial microbes living in the soil.

That can include keeping living roots in the soil year-round.

Plants can exude up to a third of their sugars into the soil to feed these bacteria, which trade nutrients with the plant, Wilson said.

There’s an easy way to get a sense of how well the microbes are doing in a soil.

The farmer just has to bury a pair of cotton underwear in the field for two months.

(Any 100-percent cotton fabric would presumably work, though underwear probably are best for getting a chuckle from field day groups.)

If the microbial community is thin, the underwear after two months will be largely intact.

If the microbes are thriving, only shreds of the fabric will remain.

“I challenge you. You can do (this) yourself” at home, Kejela said.

Fertility dictates the volume of forage the pasture will produce, but forage quality depends a lot on timing.

Forage is best harvested or grazed before the plant pushes a seed head and starts packing on a stiff, hard-to-digest compound called lignin to hold it up.

Late-heading orchardgrass varieties have been developed to give farmers a wider window for grazing or harvesting.

These varieties only give an extra few days to a week, but anything to prolong the so-called vegetative stage will help, Wilson said.

If the grass will get too tall before the cattle will be back on that paddock, a farmer can clip just before grazing.

Clipping has a curious side benefit.

Grass keeps going through photosynthesis and producing sugars for a while after it’s been clipped, so “if it’s a good, sunny day, it’ll get sweeter,” Wilson said.

While the pasture can get too long, it can also get too short.

Grasses store their carbohydrate reserves in the 2 to 3 inches just above the ground.

If livestock graze the pasture down to the soil, the grasses will have to take nutrients from their roots, and regrowth will be hindered.

Livestock should be moved when the grass has been grazed to 3 or 4 inches, Wilson said.

Kentucky bluegrass and timothy are more forgiving than other grasses because they store some nutrients in their roots.

That makes bluegrass a good pasture species for horses, which like to crop close to the ground.

Legumes can also be grazed close to the ground. They regenerate from nutrient reserves in their roots, Wilson said.

Cool-season grasses like orchardgrass generally grow slower in the summer when the weather gets hot and dry.

This summer slump is a good time to rely on fast-growing annuals like millet and sudangrass, which thrive in warm weather.

Summer annuals are generally grown in a separate field from cool-season perennials because it’s easier to get a good stand that way.

Of course, given this summer’s plentiful rain, millet and sudangrass may not have been so important to graziers this year.