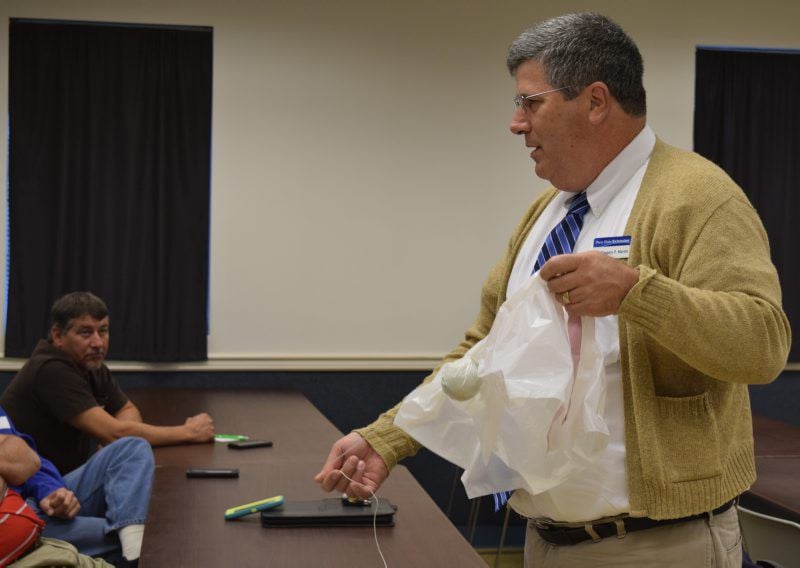 Gregory Martin, a Penn State poultry educator, demonstrates how to cover a compost pile with cheap plastic that does not have grommets. 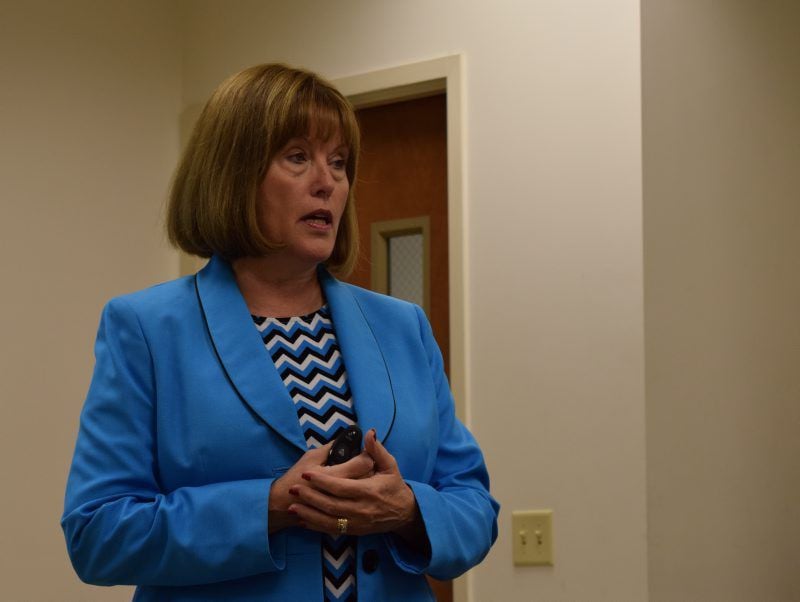 Gregory Martin, a Penn State poultry educator, demonstrates how to cover a compost pile with cheap plastic that does not have grommets.

LANCASTER, Pa. — Pennsylvania poultry experts are planning to work with manure haulers to find ways to cinch up biosecurity.

Pennsylvania’s poultry industry has done a lot of disease response planning, but collaboration with manure haulers has so far been a missing link, said Sherrill Davison, director of the avian pathology lab at the University of Pennsylvania’s New Bolton Center.

Davison met with manure haulers on Nov. 10 at the Farm and Home Center.

Biosecurity procedures, which are designed to keep diseases out of flocks, have become a particularly pressing concern since last year’s avian influenza outbreak killed or forced the depopulation of 48 million birds, mostly in Iowa and Minnesota.

Pennsylvania’s avian influenza task force, launched near the beginning of the disease outbreak, has organized teams to assist with most phases of a response, such as killing birds and cleaning up contaminated houses.

Poultry company leaders meet with university experts when there is a disease outbreak, but that response has so far not been coordinated with the manure haulers, Davison said.

Manure haulers can easily spread diseases between farms if they do not follow best practices, so it was important to get them in the loop.

As an industry, “we’re trying to close all these gaps,” Davison said.

A relatively small outbreak of laryngotracheitis several months ago in Lancaster and Lebanon counties only reinforced those concerns.

Davison could not pinpoint manure hauling as a way the disease spread — trucking of infected but asymptomatic birds may have contributed — but it was clear that communication could be improved between the poultry industry and the haulers, she said.

One of the most important biosecurity steps manure handlers can take is keeping their vehicles clean.

If there is a lot of manure on a truck’s tires or undercarriage, just spraying a disinfectant won’t accomplish anything. The machine should be cleaned, Davison said.

Most disinfectants need 10 minutes to do their work, but drivers often spray right before they go onto the farm, Davison said.

Some newer disinfectants have shorter contact times of a few minutes. Researchers are trying to knock the contact time down to a minute, but until that happens, drivers would do well to allow enough time for the disinfectant to work, Davison said.

That lag time could be hard for some haulers to stomach.

“I know time is money” for the transportation industry, Davison said.

Getting disinfectant on every surface of the tires can be challenging.

He sprays his vehicle’s wheels down, then pulls forward a few feet and sprays again.

Unlike Martin’s passenger vehicle, manure trucks are often outfitted with tire spraying equipment, but the need for thorough coverage remains.

Diseases don’t just linger on the outside of trucks.

In a swine industry study, pathogens were found inside haulers’ vehicles on the mats and foot pedals, Davison said.

Haulers should use washable mats, and disinfect the mats and the foot pedals regularly, Davison said.

Martin uses a can of citrus-scented Lysol to hit other hard-to-reach surfaces.

“I bought the flavor I like because I’m smelling it all day long,” he said.

Sanitizing wipes are handy for wiping down steering wheels. Martin keeps a container of wipes in his vehicle, plus a trash bag for disposal.

Manure handlers should also think about the things they carry with them when they visit farms.

Davison said she uses disinfectant on her cellphone or puts it in a plastic sandwich bag to keep it clean.

A little planning could reduce the risk of transporting diseases in the manure itself.

Haulers generally take manure straight from the source to the field, but it would be better to compost it first, Martin said.

A poultry house can also be heated to 100 degrees for three days to reduce the pathogens, but that might not destroy the diseases living in the lower levels of the manure, Davison said.

Composting manure might be a hard sell for haulers because of the extra time and expense of handling manure twice. Still, stacking manure under cover is not as hard as it sounds, Martin said.

Martin suggested buying relatively inexpensive sheet plastic, even if it does not have grommets.

To secure the plastic, make a small bulge at one edge of the sheet, drop in a handful of sand or pebbles, and tie it off. Continue down the side of the plastic, making the simple weights.

Last week’s meeting laid the groundwork for a larger biosecurity meeting between poultry people and manure haulers planned for February, she said.