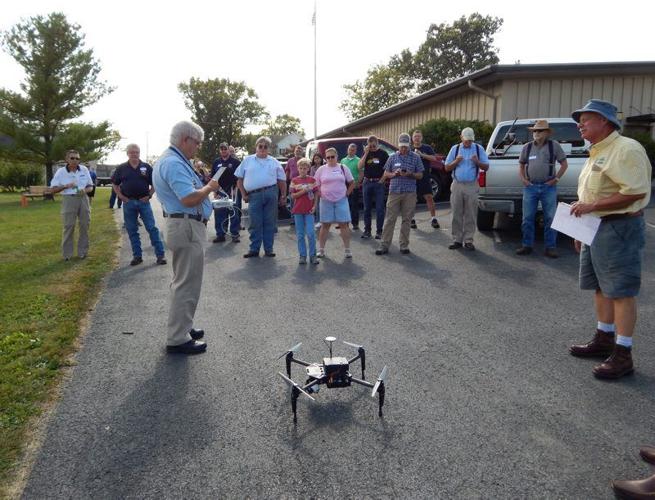 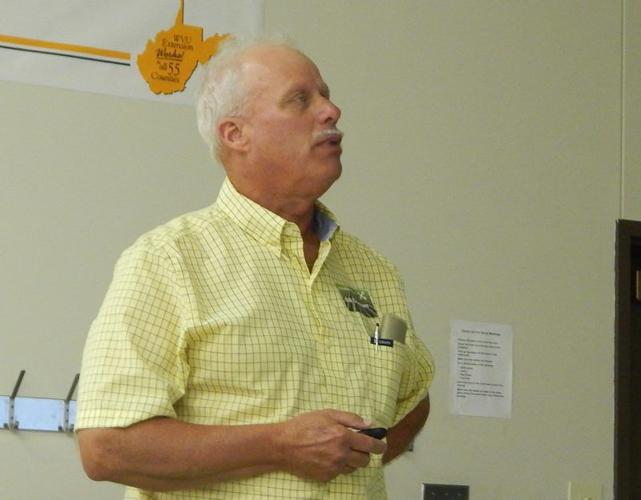 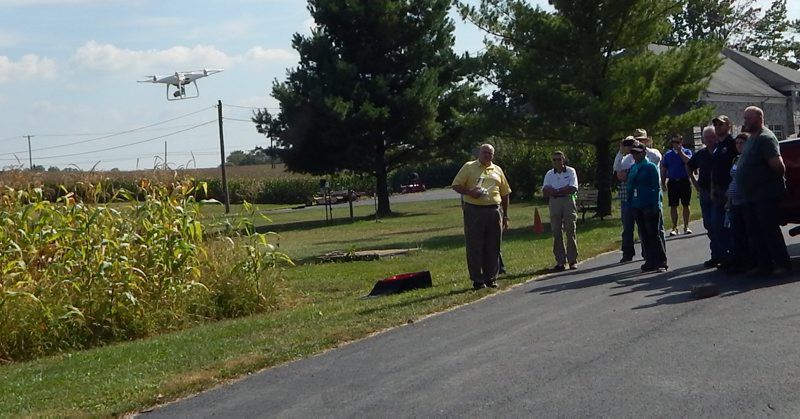 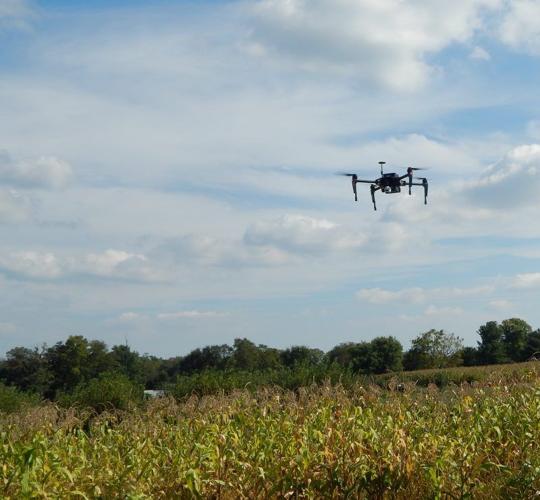 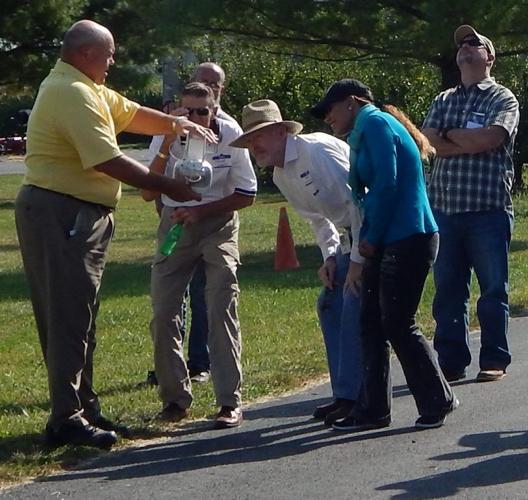 KEARNEYSVILLE, W.Va. — The whirling rotors sounded like a swarm of high-pitched bees as the aircraft quickly lifted a few feet from the pavement and then shot up 350 feet to begin its survey flight.

About 40 growers came out to the West Virginia University Tree Fruit Research and Education Center on Sept. 26 to see the unmanned aircraft, also called a drone, in action.

The demonstration was put on by Agronomy-Air and Joe Sommer of Penn State.

“We can observe and measure a variety of the crops,” said Bill Grantham of Agronomy-Air. “We can use GPS for precision mapping, checking crop yields and soil types, moisture levels, nitrogen, potassium, erosion. We want to get photos of fields before they are harvested and then put them up against the harvest monitor to see what this can tell you. We want to boost economics either by yield, weed management or fertilizer management.”

Sommer said unmanned aircraft have been used in the Midwest for many years.

“We have been working with our apple research center in Biglerville (Pennsylvania) and with our Pennsylvania Christmas tree growers and golf courses. We have looked at blossom canopy coverage in the spring and helped tell about crop yield in the fall,” he said. “We have photographed leaf canopy stress, invasive species, helped with apple and Christmas tree inventory. It is harder to do canopy stress on conifers, but for corn, soybeans and apples, it works well.”

“This is a commercial Phantom 4 with four rotors that can be used for crop scouting,” Sommer said, describing one of the drones. “This has the very same technology that is inside the cellphone. It has a gyroscope, an accelerometer, a compass, GPS and Wi-Fi. That camera is 5,000 by 3,500 pixels, and that is twice as good as the TV you watch at home, which has around 1,900 pixels.”

Though many people call them drones, Sommer doesn’t like that name.

“When I was kid, a drone was something the military launched in the sky, practiced shooting it down with surface-to-air missiles. So to me, a drone is something that falls from the sky. There are also military connotations for the word drone, so I call them unmanned aircraft,” he said.

An on-board computer monitors the speed of the rotors and keeps them all the same.

“Two of the propellers are right-handed threads and two are left-handed threads. If they all went the same way, the aircraft would just spin in the other direction,” he said. “Most have a camera that is mounted on a gimbal, which will move it independently. It is completely stabilized so that the camera does not roll when the device goes right or left.”

On average, Sommer said, these unmanned aircraft can fly for 20 to 25 minutes depending on payload. They can hold their place in wind up to 20 miles per hour, but landing can get dicey.

“We capture lots of pictures and glue them together,” he said. “You don’t just take it out and fly, you need preflight mission planning, waypoints and where to take a picture.”

Sommer said that to cover an area, you lay out an outline that will generate a serpentine pattern with an overlap to stitch the pictures together later.

“If you do this yourself or have someone fly for you, it doesn’t do any good to know what you see unless you go and make a decision,” he said. “Always use this information to make a decision. Otherwise, it is just pretty pictures.”

Emily Wells, ag and natural resources with the West Virginia University Extension Service in Jefferson County, said more of this technology will be used by farmers in the future.

“In my mind, we have been doing precision agriculture for years, and if you ask any farmer which fields will need extra care and which areas don’t, that is part of precision agriculture,” Wells said. “This is on the rise with new technology and will grow to a $43 billion industry by 2025. We need to optimize input and utilize variable-rate applications of fertilizer to apply just the right amount of fertilizer to the right place at the right time. This is a perfect way to gather the information you need.”

John Young said he came out to the demonstration to learn about drones as he does field mapping himself and is interested in using drones in forestry.

“I am interested in the technology at a really fine scale and this has been great. I really learned a lot,” Young said.

Grantham said it is important for farmers to pinpoint problems areas before harvest, and a drone is a good tool.

“We want to come out and fly that before harvest because once the combine goes through, it removes the evidence. We would like to do vegetables, apple orchards, nutrient management plans, conservation and controlled erosion projects,” he said. “It’s best to get in and fly before they do the corrective measures and put it all on record.”

If you plan to purchase and fly your own unmanned aircraft, you must comply with Federal Aviation Administration policy.

“If you are a hobbyist you can fly your aircraft, but if it weighs over half-pound, you need to register it,” Lee Jones said. “If you are a commercial operation such as a farm, there is a mandatory registration and you must get a Part 107 remote pilot certificate. You need to register all your vehicles and one cannot be over 55 pounds. You must fly in daylight and keep it in visual sight.

“If you are within 5 nautical miles of an airport, you must contact the control tower that you are just outside their airspace and tell them the altitude you are using,” he added. “You are sharing the air space with manned aircraft. Drones are limited to 400 feet and manned aircraft are supposed to be above 500 feet, leaving a 100-foot buffer. The drones will go higher than 400 feet, but you should not and there are certain areas around airports where you can’t fly.”

Lee said a preflight checklist should be done before sending a drone out.

“If it is windy, I recommend you fly across the wind to save on batteries. The aircraft will take care of the speed, but a headwind can add 30 percent to flight time. You don’t have to have cell service to fly but you have to have Wi-Fi to program it,” he said.

The attendees spent around 10 minutes looking up at the aircraft zipping around at 350 feet until it returned to within a few feet of its takeoff origin.

“My son-in-law is a certified drone pilot and we would like to use it in our vineyards,” said Frank Lazarus, who runs Springhouse Vineyard in Hamilton, Virginia. “We need to look at different blocks of the vineyard and where they are stressed due to nutrient and moisture deficiencies or a problem with fungus. I thought this was terrific. This tech has a lot of different possibilities for different kinds of crops and we can use this for our vines. A friend of mine has a vineyard and employees 12 men who constantly scout the vineyards where these machines can do it in one-tenth of the time.”

For additional information on unmanned aircraft for agricultural applications, you can contact Agronomy-Air LLC at bgrantham@agonomyair.com or Joe Sommer at hjs1@ psu.edu.