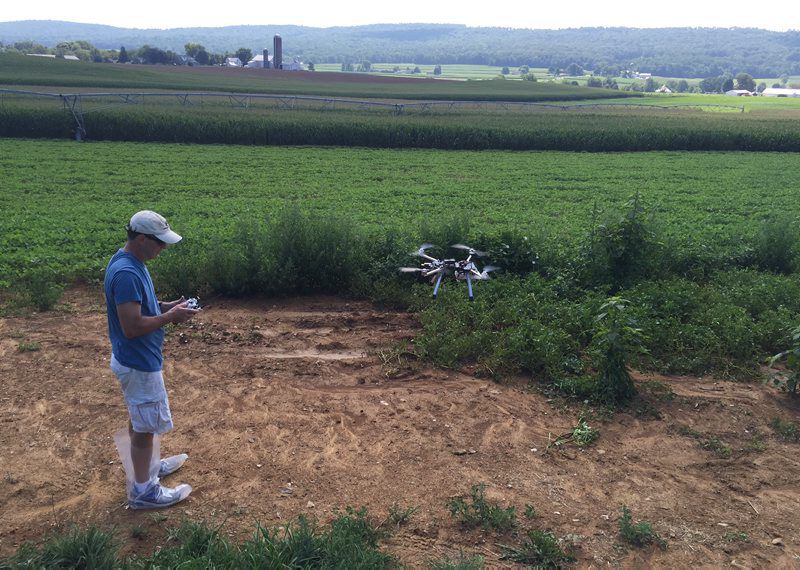 These creamers were among the potatoes from Penn State’s field trials on display for Potato Day.

These creamers were among the potatoes from Penn State’s field trials on display for Potato Day.

SCHNECKSVILLE, Pa. — Potato growers are usually a well-grounded bunch, but they took flight March 2 during the annual Eastern Pennsylvania Potato Day at the Schnecksville Grange Hall.

Bob Leiby, a crop consultant for the Pennsylvania Co-Operative Potato Growers, one of the sponsors, talked about the advantages of precision agriculture, particularly for identifying and containing plant diseases.

When it come to potato virus Y, some plants don’t express symptoms, Leiby said, and he’s been working with AgVue, a commercial drone company, to determine if the virus can be detected by drones.

Paul Caskey of AgVue, formerly Drone Imaging, talked about some of the general advantages of using commercial drones for field imaging.

Caskey said his company was the first in the state licensed by the Federal Aviation Administration for commercial drone use.

Drones allow a farmer to “see” every square foot of field crop, orchard or vineyard, which can be especially helpful for insurance claims, field analyses and plant disease diagnoses.

AgVue’s drones take this information gathering a leap forward from hobby drones by employing commercial sensors and software not only to detect plant issues before they can be physically seen but also to offer a prescription for areas that may need additional inputs based on the drone’s findings.

This high-resolution imagery assesses vegetative health by comparing the reflectance from plants of light wavelengths not seen by the naked eye with the normalized difference vegetation index.

Infrared light patterns, for instance, can indicate the health of the plants and, to some extent, the varieties of plants, separating vegetables from weeds and counting the number of large plants.

That information can be used to contain disease outbreaks.

Drone imagery can also be used to create three-dimensional topographical maps with field contours and to identify drainage issues.

AgVue is currently in the process of creating a phone app that would allow a user to zero in on a specific point on one of these digital field maps and walk out to it in the actual field.

Compared with high altitude data from planes, satellite imagery and ground observations, the data from low-altitude drones can be more specific and gathered at a lower cost per acre.

When a commercial company such as AgVue collects and analyzes data, it programs the drone for the field area, altitude and time, and then flies it over the field in a “mowing the lawn” pattern.

Image stitching combines all the images the drone records into a single, high-resolution, perspective-corrected mosaic of a field.

The software allows farmers to see issues they might have missed in scouting a field and to see them on a comprehensive scale.

Inputs to optimize the productivity of the field can then be spot-applied where needed instead of using a blanket approach, which saves on labor and materials.

The field data collected are sent to the farmer’s data repository in the cloud but are otherwise kept confidential.

Caskey said hobby drones can be outfitted with some of these sensors but without the same level of accuracy as commercial drones.

To scale the software and hardware up to the commercial level would cost an individual producer thousands of dollars, he said.

Caskey was just one of several speakers featured during Potato Day. “I thought we had a good balance of speakers and covered some issues that were current major issues of importance to potato growers,” Leiby said.

Peck’s trial review included several chipping, table stock and specialty varieties, including a number of creamers that were on display at the event.

Peck asked the room if there was an interest in finding a productive purple variety for the area, but growers did not express a real need for it in their current markets.

He said this year’s chipping data was affected by uncommonly large counts of black spot bruising and vascular discoloration, mentioning that the high temperatures and weather of the past season may have been at play with those issues.

Peck and his team are continuing to look for successful early-season potatoes, and they test hundreds of varieties from university programs, the USDA and private seed stock companies.

He urged attendees to tell him what types of potatoes they are looking to grow or want to learn more about.

After lunch, there was a presentation on rotating canola with potatoes by Andrew Smyre, an agronomist with Perdue AgriBusiness, and the annual meeting of the Lehigh Valley Potato Growers Association, another of the sponsors.

“The day was very useful and helpful,” said Steven Hunsicker of Twin Maple Farm in Bath.

“It is always very interesting learning the new chemistry that different companies have to offer to help battle insect pressure and diseases that potatoes can get,” he said, “and also learning about the new technologies that are out there, such as drones, which help make us better farmers.”

Liz Wagner is a freelance writer in New Tripoli, Pennsylvania.