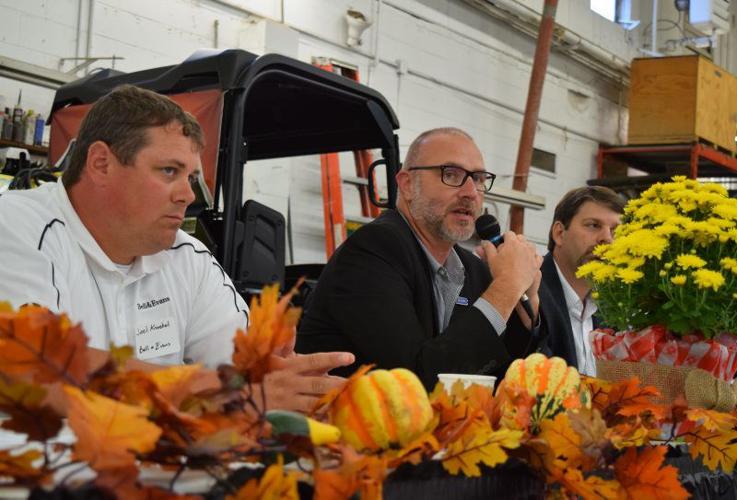 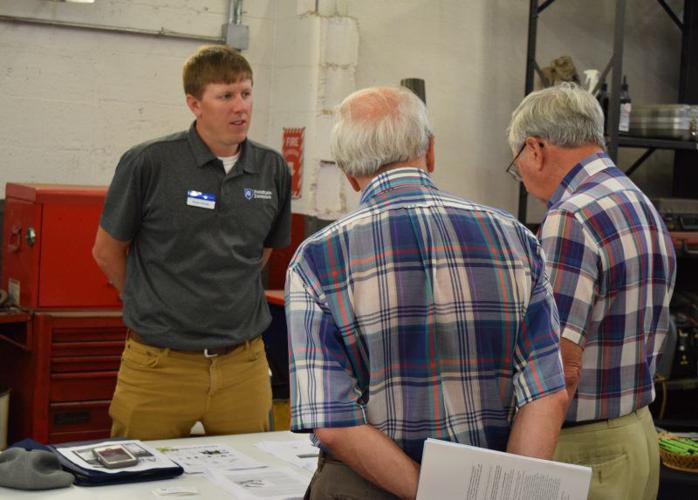 INTERCOURSE, Pa. — Greg Hostetter’s grandfather must have been a busy guy.

Starting in the 1920s, he milked cows, raised laying hens and did custom butchering for his neighbors.

Of course, it was common in those days for farmers to have their hands in many enterprises.

“As far as risk management, you know, it’s not a bad thing to look back at the way it was done years ago,” said Hostetter, a Pennsylvania deputy ag secretary.

Diversification never really went away, but farms did become more specialized — focusing on dairy, pork or grain production — during the 20th century.

Putting a farm’s eggs in more than one basket is back in vogue, though, after several years of low commodity prices.

A farm’s new venture could involve anything from a staple food like chicken to a pricey niche item like edible flowers.

All ideas were on the table at the Lancaster County Ag Week farmer’s breakfast on Monday at equipment dealership Hoober Inc.

Growing microgreens, for example, offers many of the benefits a farmer could want in a side business — high product value, reasonable time commitment, independence from the weather.

Microgreens, used by restaurants and catering companies, are harvested in just a week or two, after they have little more than sprouted.

“Product turnover happens very fast. That’s why it can be a quite high-profit operation,” said David Foster, the chief scientist at Intag, which develops soil-free growing systems.

One part-time worker growing microgreens in a shipping container can net $30,000 a year, and the system pays for itself in five or six years, said Foster, who is also Messiah College biology professor.

After a series of foodborne illness outbreaks related to leafy greens, some consumers believe that hydroponic lettuce and spinach pose less of a food safety risk than crops grown in the ground, said Tom Ford, an Extension educator.

Greens have worked well for some greenhouses that used to rely on bedding plants and hanging baskets.

“Baby boomers are not buying as much, and millennials aren’t buying, so how do you keep the family operation afloat? And the answer has been hydroponic vegetable production,” Ford said.

Popular, high-value fruits like raspberries and strawberries are grown in the ground, but they do well in high tunnels, which provide shelter from the weather.

Some growers dip yellow raspberries in dark chocolate to celebrate the Pittsburgh Steelers — and charge $14 a pound, Ford said.

But there’s a crop that can ring in even higher than that.

Edible flowers can fetch $2.50 to $6 an ounce from upscale restaurants, but “it’s very exacting,” Ford said. “You can’t have any pest issues. There’s no sprays or anything, so you’ve got to be a very good grower.”

“A lot of the restaurants that like those for their salads have a hard time getting them shipped in from across the country and being anywhere remotely fresh,” said Foster, of Intag.

But a crop doesn’t have to be edible, or grown indoors, to add income to the farm.

Some vegetable growers are dedicating small acreage on their farms to Christmas trees, said Tanner Delvalle, an Extension educator.

Trees can be a convenient sideline if customers already come to the farm, though they do have to be fertilized, sprayed and sheared every year.

“It’s not as simple as planting a tree, and waiting 10 years and cutting it down,” Delvalle said.

Find Your Own Niche

Sometimes the goal of a side business isn’t to make opulent sums but to add stability to the family’s income.

That’s one reason dairy or grain farmers, who are vulnerable to seismic price changes, may choose to build a poultry house.

“It’s weatherproof income. You know what your check’s going to be,” said Joel Knoebel, a representative of Fredericksburg-based Bell & Evans.

The company contracts with almost 140 farms to produce high-end chickens.

In other cases, farmers may not want to add a new crop or animal at all.

By finding a new marketing channel or creating value-added products, farmers can increase revenue from the items they’re already producing.

Consider, for example, one farmer who had a surplus of ground pork.

She started making meatloaf and charged $12 per 1-pound loaf. That’s a tidy haul for what is otherwise a low-value cut of meat, said Brian Moyer, an Extension program assistant.

Another farmer got into ready-to-eat meals, such as noodle bowls made with eggs and vegetables from the farm.

“In the Amazon period that we’re in, it is all more about convenience and ‘can I get it any time I want it?’” Moyer said.

But even with their relatively large families, Plain farmers must be wary of taking on too many businesses that they can’t run them all well.

“Everybody has to find their own niche,” said J.B. Beiler, a Plain Sect spokesman.

Diversification can allow adult children to join the farm business and empower farmers to set their own prices instead of just taking what the market offers.

The key, of course, is to make sure the family has the money and management ability to be successful.

“Do I have the capital which provides me a long enough runway to get a new venture launched?” said Mike Peachey, a partner at Acuity Advisors and CPAs.

And it certainly helps to choose something the farmer will enjoy doing.

“I know lots of people in agriculture ... who love what they do and why they do it,” said Jeff Hyde, acting director of Penn State Extension. “And it gives them a passion and drive.”