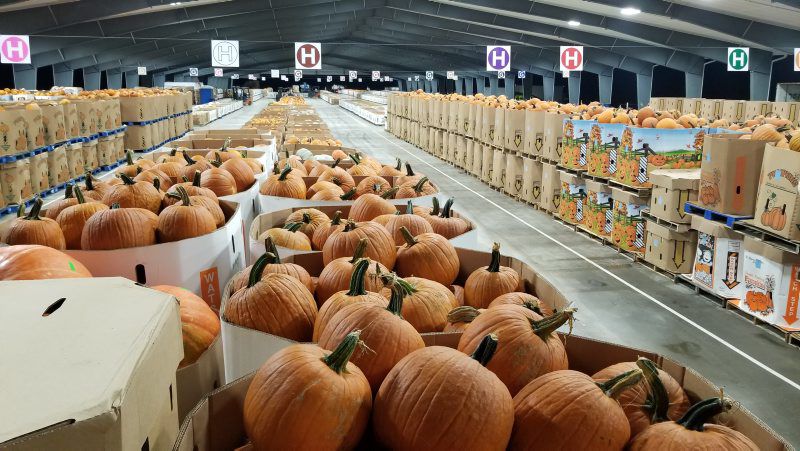 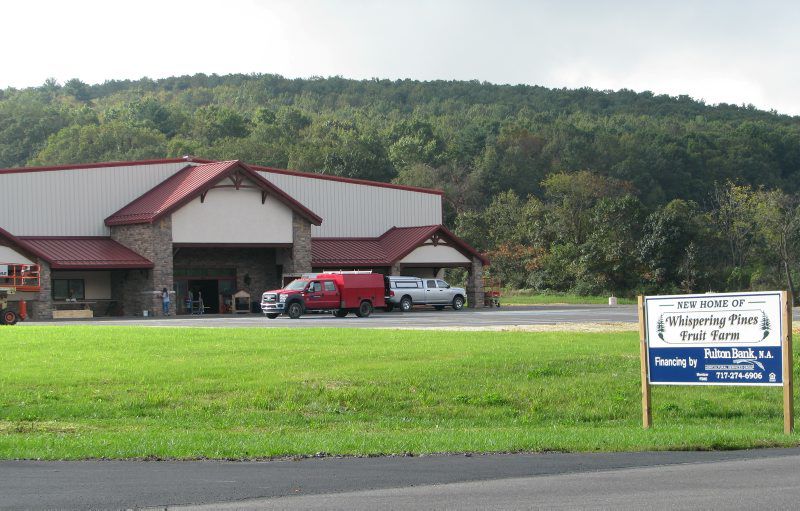 Photo by Tabitha Goodling The exterior of the new facility for Whispering Pines Fruit Farm and Country Market in Mount Pleasant Mills, Snyder County, Pennsylvania, is visible on Martin Brothers Road. It is expected to open in mid-November.

Photo by Tabitha Goodling The exterior of the new facility for Whispering Pines Fruit Farm and Country Market in Mount Pleasant Mills, Snyder County, Pennsylvania, is visible on Martin Brothers Road. It is expected to open in mid-November.

MIFFLINBURG, Pa. — Two markets in central Pennsylvania counties are bursting at the seams with products.

The businesses have been so overwhelmed, structural changes and additions were necessary.

Buffalo Valley Produce Auction in Mifflinburg, Union County, and Whispering Pines Fruit Farm and Country Market, which includes a retail store in Mount Pleasant Mills, Snyder County, have expanded due to a high demand of business in recent years.

Neil Courtney is the auctioneer and general manager at Buffalo Valley. He said the need to build a 150-foot by 60-foot building was necessary mainly for the fall pumpkin season.

“We built it this summer, and it looks like it might not be big enough,” Courtney said.

Pumpkin sales have been up significantly over the last couple of years, he said. And space was limited for the sales on Tuesdays and Thursdays.

“We were doing pumpkin sales in the parking lot,” Courtney said, which included tarps covering the pumpkins from the weather. However, the tarps often caused the pumpkins to get dirty and look less appealing.

“We sell that many in a day and then do it again two days later,” he said.

Courtney said it only made sense to get the new structure built this past summer.

The auction facility is located along Violet Road in Mifflinburg. Auctions are held at 9:30 a.m. on Tuesdays and Thursdays from March through November. A variety of produce, flowers, plants and shrubbery is sold, as well as Christmas trees and wreaths.

In neighboring Snyder County, the Hoovers, who operate Whispering Pines, had decided to build an entirely new store across the road from its current location in Mount Pleasant Mills.

Whispering Pines originally opened exclusively as a fruit farm in the 1950s. Previous owners had opened the store to sell the orchard’s fruit and local produce and added a bakery and discount grocery area.

“We were crammed for years already,” said Delbert Hoover, one of the owners.

Hoover’s father, Jay Paul Hoover, and his uncle, Neal Hoover, had bought the business in 1989. Delbert, and Neal’s son, Lynford Hoover, took over the reins in recent years.

Over time, the business grew and the additions to the older building were aging.

Delbert Hoover said Saturdays are the busiest days and parking is limited.

“It got to the point people hesitated to come out on Saturdays, because we are so busy.”

The new facility is 28,000 square feet, half of which is retail; the other half is warehouse. A large, spacious parking lot surrounds the building.

Delbert Hoover said he expects to open the new location in mid-November.

Each department is expanding and the store is adding Kreider Farms dairy options to the business. The store will continue to sell all locally grown produce and their own fruit from the farm.

The former facility will be used for fresh fruit storage at this point, Delbert Hoover said. Additional employees are being hired to help at the new location, too.

Family, however, is an important part of the progress at Whispering Pines, Delbert Hoover said.

“We are thankful for our parents and all they did here first. We are greatly indebted to them. We have indeed been blessed,” he said.

The early days of the business were dedicated to wholesale, which is still an important part of the business. However, the addition of the bakery and the incorporation of discount groceries has helped draw in a larger group of shoppers.

Local produce is still a favorite among customers, Delbert Hoover said, and a reason many travel off of Route 104 onto Martin Brothers Road.

“They still seem to find us back here,” he said.

Courtney said the increase in business that brought the need for expansion is thanks to a good economy.

“People are spending money because the economy is better. We have a niche market and we provide a lot of services. We have high quality growers,” Courtney said.

He also said the increase in produce is a result of small dairy farmers seeking to make up losses in dairy by growing vegetables and fruit.

Courtney said he has not ruled out further expansion, because the new building for the pumpkins seemed to overflow this year.

“We’re at the end of the season now and the volume is dropping off considerably,” he said.

Courtney said there are possibilities of adding another 100 feet by 150 feet, and/or another 40 feet by 200 feet to the building.

It all comes down to finances, he said, and it is too soon to tell. But he is not complaining.

“This is a good problem,” he said.