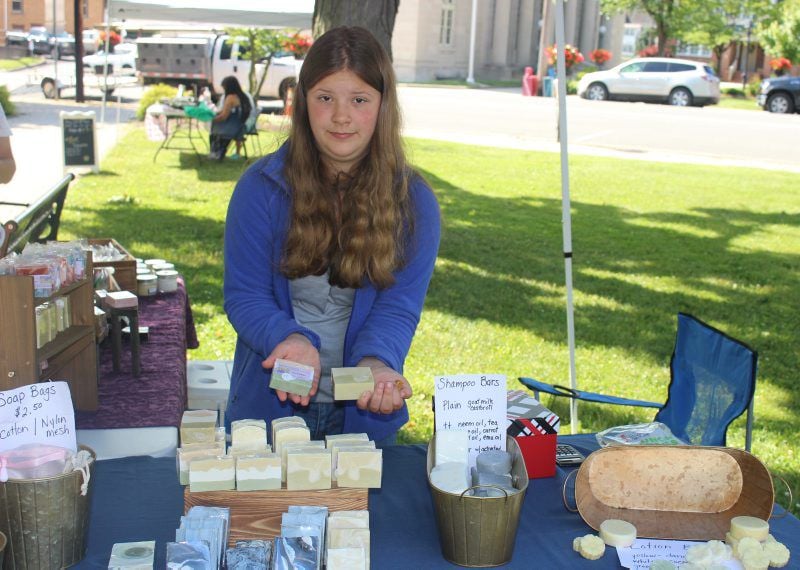 Cora Foreman, 13, with her homemade goat milk soap at the Bedford Farmers Market in Bedford, Pa. She does all the aspects of the business herself. 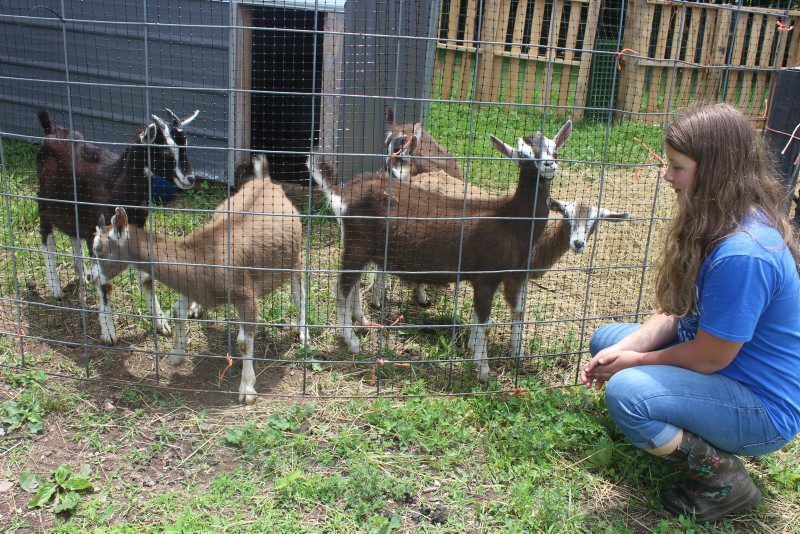 Cora does most of the chores for her dairy goats herself, from feeding to building fences. 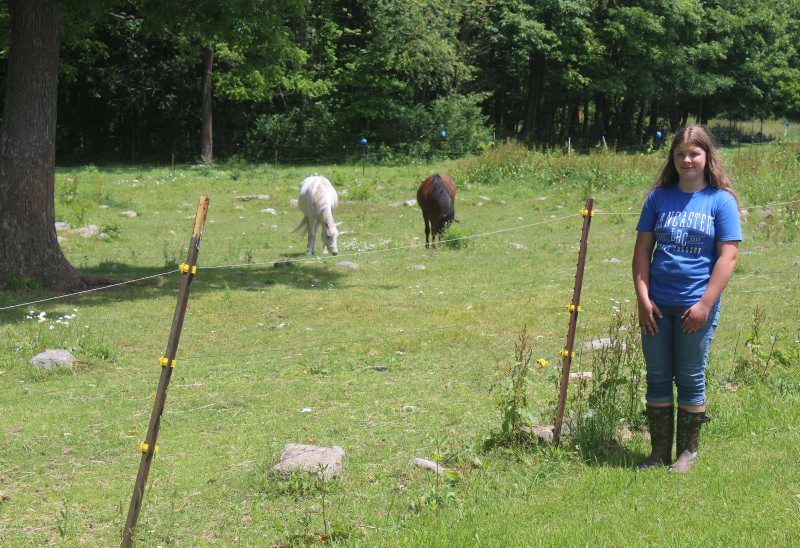 Photos by Linda Williams Cora’s ponies are the love of her life.

Cora Foreman, 13, with her homemade goat milk soap at the Bedford Farmers Market in Bedford, Pa. She does all the aspects of the business herself.

Cora does most of the chores for her dairy goats herself, from feeding to building fences.

Photos by Linda Williams Cora’s ponies are the love of her life.

BEDFORD, Pa. — The Bedford Farmers Market offers a wide variety of products from blackberry cider to dog biscuits, fresh baked goods, and vegetables in season. It is a busy place each Wednesday morning.

A booth offering a unique combination of handmade colorful soaps and duck eggs is new this year. While the adult on the scene is Lynne Shaffer, she will quickly tell you the market business venture is run by her 13-year-old niece, Cora Foreman of Hopewell.

Since birth, Cora has spent a lot of time with her Aunt Lynne at her farmette, Deep Well Farm, in Breezewood. A certified teacher, Shaffer has specialized in home schooling or private schools. Cora’s parents, Missy and Scott Foreman, took Cora out of the public schools several years ago and Shaffer became her designated primary teacher. The Foremans teach their daughter math and science while Shaffer picks up the other subjects and particular extracurricular subjects.

Having schooled her own children, Shaffer, a 4-H leader for “more years than she can remember,” was in tune with Cora’s liking for animals, especially goats and ponies.

“My own children had goats, and Cora enjoyed them so much, she just picked up the herd and began expanding it,” Shaffer said.

The goats are Toggenburgs and Alpines, both dairy breeds.

With a herd approaching 40 in number, a lot of milk was being produced. Doing some research, Cora asked her aunt about making soap — and the venture began. Both admit that it was trial and error until they found a product they really liked.

They now make soaps with essential oil fragrance and soaps with natural fragrance. Cora decided she wanted to add color, so she did. She found that many of their customers like this addition, purchasing soaps to match their bathroom decors.

Cora also sells lotion bars, which is a soap that melts with body heat and keeps the skin soft and moist. And, she makes shampoo bars, which she enjoys using on her own long hair.

During their first few weeks of production, Cora found two outlets to sell her soap — at Bedford’s Farm Bureau and at Wholesome Living, both in Bedford. In addition, the soaps can be purchased online and at the farmers market.

Cora has shown her goats at many events, through the Ghost Riders 4-H Club. Shaffer said the young teen understands the entire process of breeding, birthing and raising goats. Cora also does the feeding and helps to build fencing. She admits it is not her favorite part of the process, but realizes it has to be done. While she has done well in competition, Cora finds the farming part to be more to her liking.

It was Cora’s love of agriculture that also led her to ducks. Shaffer told her she could raise ducks if she did the research and found an acceptable breed.

So, Cora chose blue and black Swedish ducks. She has 12 hens and just two drakes. She has just two because she said that duck drakes are very aggressive.

The ducks have their own fenced off area that is protected by several of Shaffer’s Pyrenees dogs. The dogs keep hawks and other predators at bay.

With 12 hens, Cora gets at least a dozen duck eggs a day to use or sell. She usually sells them at the farmers market or through Wholesome Living.

The eggs are bigger than chicken eggs, and Cora said that one of the bakers at the farmers market found them to make her cinnamon rolls more moist.

When Shaffer first suggested attending the farmers market, Cora was not so sure she liked the idea. But when presented with the facts and then given the opportunity to make her own decision, Cora decided it was worth a try. Now, she very much enjoys talking to all the people she meets there each week.

Cora also finds time to enjoy her Shetland-Arab pony and has competed with it at 4-H events. In addition, she has a miniature pony that has been a pet since age 2.

This summer she began gardening — digging, planning and fertilizing the soil. By fall, she hopes to have a garden of sunflowers. Next year, Cora may expand her offerings at the farmers market booth to include garden produce.

And, one of her next soap ventures will be a dog shampoo. One day in the future, Cora thinks, she might like to have a dog-grooming business. At the age of 13, Cora is certain her future will include agriculture.

As part of the Canadian Agri-Food Policy Institute and Farm Foundation’s series “Managing Agricultural Trade in an Increasingly Chaotic World,” a panel of speakers was convened to speak about international trade and the World Trade Organization. Read more

Meet the Attorney Trying to Bring Down DFA

A young country attorney goes up against a multimillion-dollar business, aiming to bring it down for alleged extortion. Read more