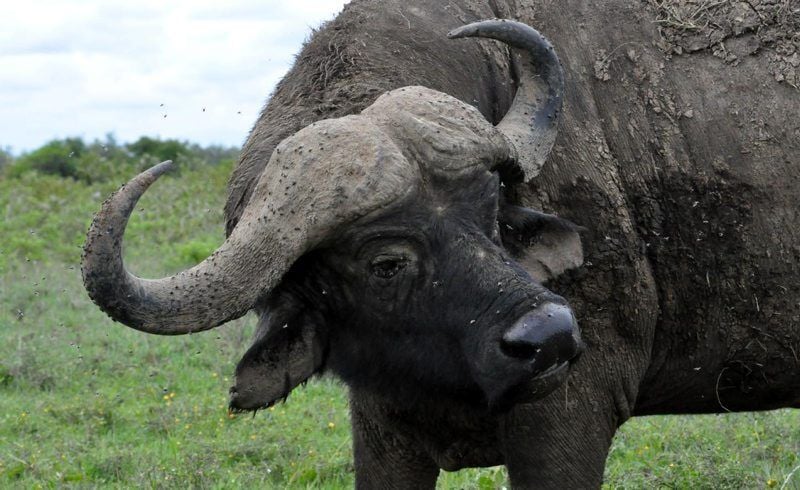 Photo by Michael Miller Stable flies are a scourge to livestock and wildlife alike. A Cape buffalo is tormented by a cloud of flies. 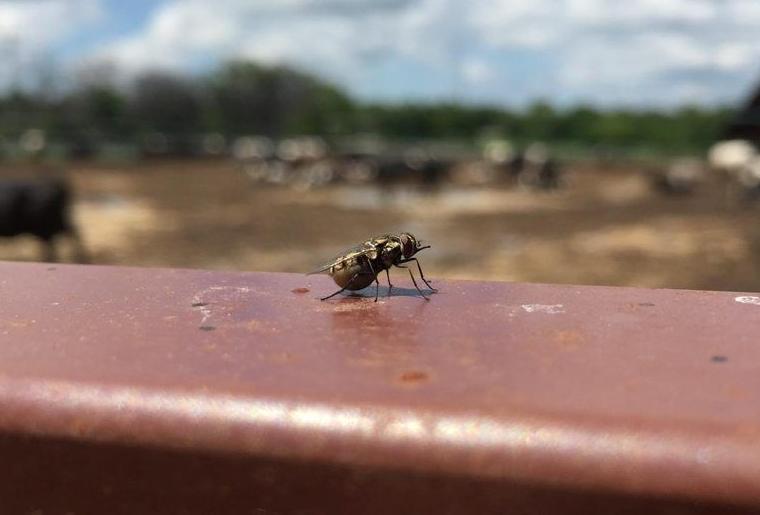 Photo by Pia Untalan Olafson A stable fly rests on a corral railing at a dairy farm in Lingleville, Texas.

Researchers hope to use an agricultural pest’s genetic code against it to prevent billions of dollars in annual losses in the United States.

Stable flies, or Stomoxys calcitrans, are spotted, tan-colored flies found around the world. They are easily mistaken for the common housefly but for one notable distinction: They bite.

“If you get one in your house and it bites you, it’s a stable fly,” said Joshua Benoit, an assistant professor of biology at the University of Cincinnati.

Stable flies don’t bite so much as chomp. They are the scourge of beachgoers in Florida and recreational boaters in upstate New York. According to Thomas Jefferson, they tormented signatories of the Declaration of Independence.

“You shoo it away and shoo it away but it’s persistent and lands on you. And then it bites. And it’s not a pleasant bite. It’s a pretty vicious, painful bite,” Benoit said.

UC joined an international team that unlocked the genome of stable flies. Benoit and his students contributed to a fundamental research project called i5k that has the ambitious goal to sequence the genes of 5,000 species of arthropods, the group that includes spiders, insects and crabs.

“It’s a pretty cool project. Molecular research on stable flies is far behind many other organisms. Our goal was to jump it up so we have a good model system to understand the biology of stable flies,” Benoit said.

Previously, UC worked on similar projects for bedbugs and the agricultural menaces thrips and screwworms.

With stable flies, Benoit said they were looking for possible weaknesses to exploit in its genetic code. Researchers examined stable fly biology using genomic sequencing and RNA analysis over the fly’s development. They also identified 1,600 genes related to stable fly reproduction, which could lead to new biological controls without the use of pesticides.

“Conducting research for its own sake is reward enough, but it is always heartening when the findings generate interesting novel avenues for exploration,” said Christopher Holmes, study co-author.

The study was published in the journal BMC Biology. Pia Untalan Olafson of USDA was the study’s lead author.

“Stable flies are arguably one of the most important pests of livestock in the United States,” Olafson said.

The Pest Causes $2B in Agricultural Losses Each Year

The project has huge economic implications, from tourism to agriculture.

Nobody can nap in a beach chair with stable flies for company, and the flies cause an estimated $2.2 billion in livestock production damages each year, according to USDA. Cows beset by stable flies produce less milk and put on less weight.

Unlike mosquitoes, both male and female stable flies bite.

“It’s a nonstop onslaught all the time. The flies need a blood meal to survive and reproduce. So they will keep trying to bite and trying to bite. They are very persistent,” Benoit said. “When you get a thousand of these biting a cow, it can have a huge impact on agricultural productivity.”

Olafson said the research has implications far beyond the United States.

“Worldwide, these flies have become a societal issue of public and political importance,” she said. “Growing international agroindustries, like pineapple, coffee and sugarcane, produce large amounts of byproduct that are ideal sites for stable fly larvae to develop. These sites can produce upwards of hundreds of thousands of flies per acre. Livestock producers and communities that neighbor these industries feel the impact.”

UC’s study also helps scientists better understand why some flies evolved to feed on blood while similar species didn’t. The flies lay their eggs in wet or rotting vegetation, like the wet hay or straw found around barns and stables that give them their associated name.

By understanding the genes responsible for stable fly reproduction, researchers hope to design novel biological controls similar to methods that have worked to eradicate other pests such as screwworms.

“Any targeted control like that is probably better than widescale pesticide application, which will kill all insects. So you don’t have to release chemicals into the environment,” Benoit said.

Columnist Nathan Briggs discusses harmful flies to look out for and how to manage them in this week’s Livestock Letters.