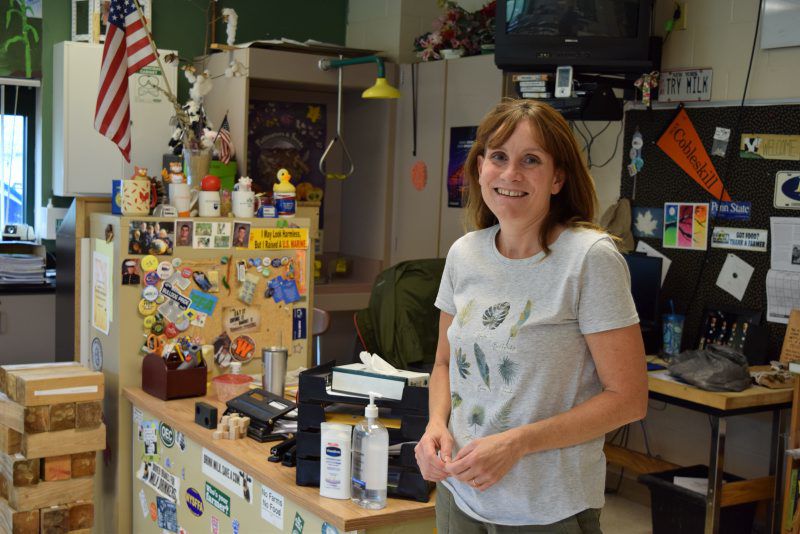 Deb Fletcher stands in her classroom at Cobleskill-Richmondville High School in Schoharie County, New York. Fletcher will receive the Outstanding Agricultural Education Teacher Award for the Northeast in December. 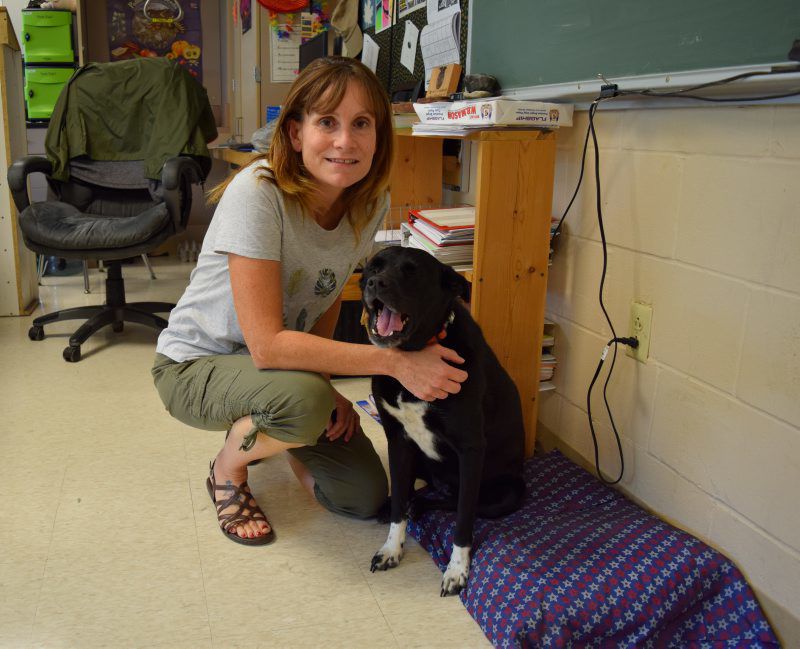 Deb Fletcher pets her dog, Daisy, who yawns after a long day in the classroom. Fletcher said her school district has been strongly supportive of her ideas and efforts as an ag teacher.

Deb Fletcher stands in her classroom at Cobleskill-Richmondville High School in Schoharie County, New York. Fletcher will receive the Outstanding Agricultural Education Teacher Award for the Northeast in December.

Deb Fletcher pets her dog, Daisy, who yawns after a long day in the classroom. Fletcher said her school district has been strongly supportive of her ideas and efforts as an ag teacher.

RICHMONDVILLE, N.Y. — Ag teacher Deb Fletcher is not the kind of person who confines herself to one little corner of the ag industry.

Fletcher teaches 14 different ag classes, from dairy to greenhouse to ag business, on a two-year rotation.

Fletcher’s versatility is partly born of necessity — she’s the only ag teacher at Cobleskill-Richmondville High School — but it’s also her favorite part of the job.

Her approach must be working.

Fletcher has been named this year’s Outstanding Agricultural Education Teacher for the Northeast region.

She and five honorees from other parts of the country will receive their awards in December at the National Association of Agricultural Educators convention in Anaheim, California.

The award is a surprise for Fletcher, who began teaching at Cobleskill-Richmondville in 1987, her first job after college.

“You just do your job” and don’t necessarily think about getting recognition, she said.

Fletcher’s students are as varied as her curriculum.

She’s got kids who grew up on farms, sure, but many students take her classes to fulfill one of their science requirements.

Students can earn college credit for many of her courses through SUNY Cobleskill, the state university in town.

As a result, one of Fletcher’s classes can include everyone from a special-needs student to the valedictorian.

“My classes are crazy mixed,” she said.

Fletcher sees that diversity as an educational opportunity. Frequent group work not only teaches agricultural concepts but also helps students learn how to work with people who are different from themselves.

She also tries to do as much hands-on learning as possible.

One recent example is the beekeeping program that Fletcher started with state grant money this spring.

Tending the hives — which sit in an out-of-the-way area near the football field —is an after-school and summer program for students who want to participate, not a class requirement.

Still, the project offers insights for her environmental and animal science classes, she said.

It also presents an avenue for nonfarmers to participate in agriculture.

“Not a lot of these kids comes from big production backgrounds, but this is something any kid could do,” she said.

Few students come into Fletcher’s classes knowing what career they want to pursue, so she tries to show them that many options are available.

At times, her classes show what won’t stick.

Some students think they want to become veterinarians until they turn squeamish during the first animal science lab — a chicken wing dissection using wings from the grocery store.

Many of Fletcher’s students do go on to careers that involve animals or plants. But even if they don’t, she wants her students to become “informed agricultural citizens,” people who can spread accurate information about farming and counter misconceptions.

Every year during the first week of October, Fletcher’s students and FFA members put on an ag fair for all of the district’s kindergartners and first- and second-graders — about 650 children in all.

The topics, such as where the ingredients in your pizza come from, change every year.

“It’s the busiest three days of the year for me, but I don’t teach at all,” Fletcher said.

The FFA’s most popular event, though, is the spring ag breakfast. Students, teachers, and even the bus drivers are invited.

This busy and exciting schedule succeeds in part, Fletcher said, because the school district’s administrators, teachers and parents are very supportive of the ag program.

That receptivity extends to letting Fletcher bring her dog, Daisy, to the classroom.

Daisy, now 9, has been coming to school since she was a puppy.

She gets lots of love from the students — and she does not like to be left at home on days that Fletcher has an after-school commitment.

But Daisy is just one part of Fletcher’s out-of-school life that translates to the ag classroom.

Growing up in Clinton County, about 10 miles from the Canadian border, Fletcher and her sister raised dairy replacement heifers for FFA.

Fletcher married a beef farmer, and they have since shifted to pigs, turkeys, broilers and bees.

The youngest of their three sons runs a growing maple syrup business.

And over the years, Fletcher has milked plenty of cows as a hired hand.

Fletcher earned her associate degree at SUNY Cobleskill — at the time, it was a two-year school — and her bachelor’s degree at Penn State.

Then, conveniently, the teaching job came open in the town where she had started college.

Fletcher has been at the school ever since, except for a two-year leave of absence from the high school when one of her sons was born.

Over that period, she worked part time at the local BOCES, New York’s term for vo-tech schools.

At BOCES, Fletcher taught the same subject for hours each day.

She found she preferred the high school model, where she switches topics every 45 minutes.

“I think I missed the pace of it and the variety of it,” she said.

Teaching does consume a lot of her time, though. Fletcher works almost till she goes to sleep many nights.

Along with teaching, she enjoys helping her son with his maple business and spending time with her grandson.

She’s starting to think about retirement, but she has no plan for when that might happen.

“When I stop having fun, I guess,” she said.

Pennsylvania Gov. Tom Wolf has vetoed a bill that would have protected agritourism businesses from lawsuits in which no party is at fault for injuries or damages. Read more

The Delmarva Poultry Industry Inc. has been changed its name to Delmarva Chicken Association and the logo has been replaced with a new blue and yellow logo surrounding a broiler chicken. Read more

The message in a hemp update roundtable delivered at a University of Maryland Eastern Shore Conference was that hemp growers need to navigate a maze of legal and production challenges if they hope to be successful. Read more

The Peterson Farm Brothers, some of the most popular farmers on YouTube, will be performing in Lebanon County, Pennsylvania. Read more