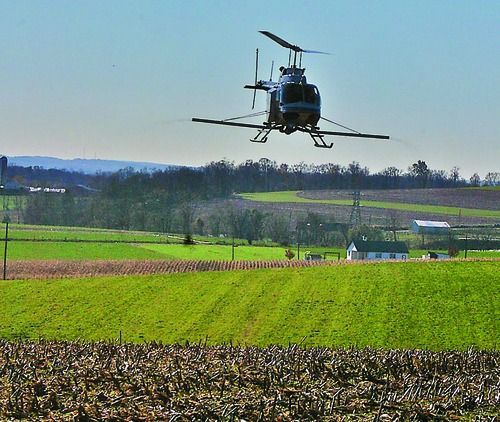 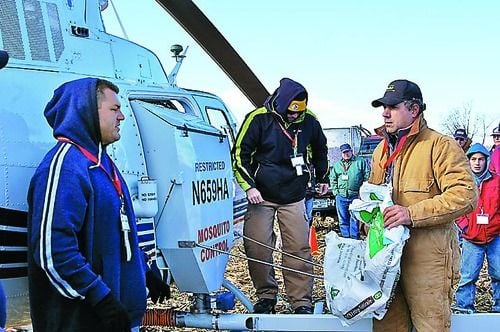 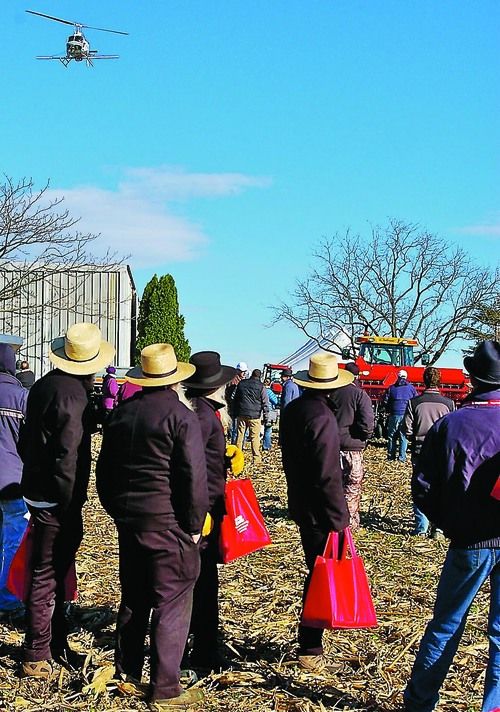 HOLTWOOD, Pa. — Farmers faced with the prospect of unnecessarily compacting their soil by seeding fall cover crops in rain-saturated fields may want to take notice of a demonstration at this year’s Cover Crop Field Day in Holtwood.

Instead of a heavy tractor churning up ruts to spread wheat seed in Steve Groff’s cornfield, the demonstration featured a helicopter broadcasting the seed from the sky.

The Nov. 8 demonstration was the first time in the 18 years that Groff has been holding the field day that a helicopter has been included.

The aerial seeding benefits farmers by carpeting their fields with a winter-hardy crop to prevent nutrient runoff and soil erosion. Such cover crops also improve the fertility of the soil.

On a fair weather day without troublesome wind, one of the company’s helicopters can carry roughly 300 pounds of seeds on each side and cover about 600 acres, he said.

A spreader bucket can be installed on the helicopter to distribute a higher volume of seeds per acre, he said.

“It handles more volume in less time,” he said.

Heffner said he tries to avoid flying in wind speeds above 10 mph, which can blow seeds outside the targeted field.

“Depending on how light the seed, the wind can carry it,” he said.

The company’s helicopters are equipped with GPS navigational and surveying systems.

The price per acre of coverage ranges from about $20 to $35, depending on the number of acres and where they’re located, Heffner said.

The helicopter he flew at Groff’s was a single-engine turbine model that was used by the U.S. Army, Heffner said.

A helicopter can be more practical than an airplane when it comes to working in smaller farm fields, he said.

“We can land right on someone’s field. ... That’s definitely an advantage over airplanes,” he said. Airplanes “can’t get as low and as slow as we can.”

Additionally, the helicopter service is self-sufficient, carrying fuel and seed on a truck to the field, he said.

Heffner said he spread roughly 30,000 pounds of radish seeds — most went into standing corn for a soil-enriching cover crop — between early August and mid-September in southern Pennsylvania and northern Maryland.

He said he gets complaints from residents near spraying areas every now and then.

“They don’t know what’s in it,” Heffner said of the spraylike application, “and it freaks them out a little bit.”

He also tries to avoid spooking farm animals, including horses, while he works.

“We do our best to fly where we’re not turning toward the horses,” he said.

The company has worked as far away as Oregon to spray for gypsy moths.

“And everywhere in between,” Heffner said.

The company’s work includes flying over forests to reseed areas destroyed by fires.

Heffner, a Red Lion, Pa., native, said he’s been interested in flying since he was a child and attended an avionics school in Oklahoma after graduating from high school. He started working for Helicopter Applicators in 2000.

“That has been a lifelong dream,” he said.

Today, Heffner lives on a small farm in the Red Lion area. He said he enjoys the agricultural education that comes with his job.