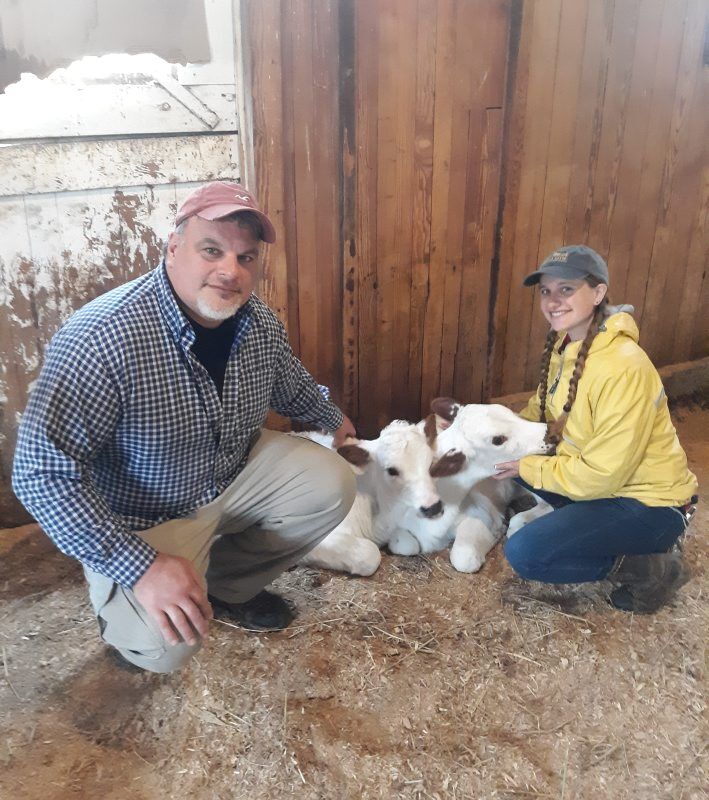 Chet Mozloom, executive director of The Lands at Hillside Farms, and Sierra Krohnemann, director of education, with two of the calves the dairy will donate to Timshel Wildland, a conservation-focused farm in Virginia. Hillside will donate about 50 calves annually to Timshel, which will use the calves to supplement other grass-based farms across the Mid-Atlantic. 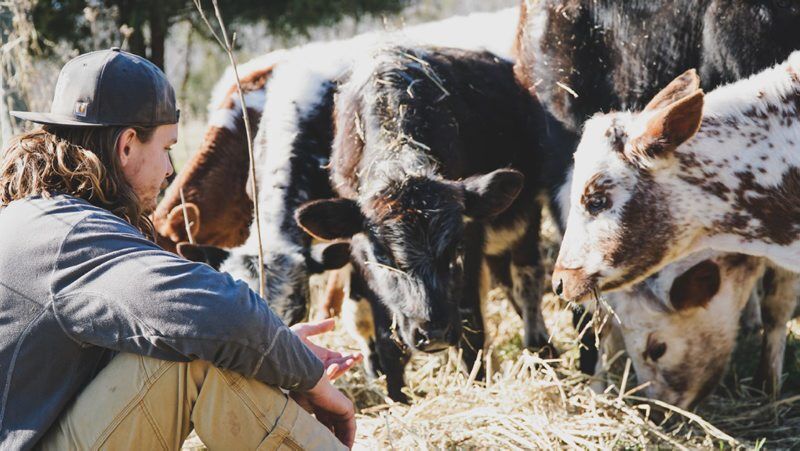 Daniel Griffith, co-founder of Timshel Wildland in Virginia, has embarked on a pilot program with a Pennsylvania dairy to donate calves to a network of farms in the region. Griffith says grazing can rejuvenate grasslands and help sequester carbon.

As the executive director of a nonprofit dairy farm, Chet Mozloom always bristled at the claim that methane produced by cows was contributing to climate change.

When an opportunity arose to flip the narrative, Mozloom jumped at the chance.

With a milking herd of 30-plus Linebacks, Jerseys and Brown Swiss, The Lands at Hillside Farms operates willingly in the public eye. Milk produced at the operation is processed and bottled on site to be sold in the farm’s retail store. Education is a significant part of the farm’s mission, so interactions with the public are encouraged.

Often, those interactions focus on the calves.

“A lot of people don’t understand that calves are a byproduct of dairy,” said Sierra Krohnemann, director of education and calf manager for the farm. “We were sending them to auction, and people don’t like to hear that. But we can’t house them all.”

In January, Hillside entered into an agreement to donate its calves — except for its replacement heifers — to Timshel Wildland, a 400-acre demonstration farm in Nelson County, Virginia.

There the calves will be conditioned on grass before being sent to other farms across the Mid-Atlantic where they’ll be raised on pasture.

The goal of the program is to use cattle to restore grasslands by grazing, and thereby increasing carbon sequestration in the soil.

Mozloom expects to donate about 50 calves a year to Timshel. Hillside can absorb the expense through sales of its dairy products and, because it’s a nonprofit farm, through donations.

More important to Mozloom, the agreement with Timshel creates an outcome for the calves that is more acceptable to the nonfarming public than veal production is, and it challenges the notion that cattle are a significant cause of climate change.

“There is a belief that ruminants are destroying the Earth, but not in this case,” Mozloom said. “This is a nice tool to show otherwise.”

Estimates vary on how harmful livestock are to the climate. The Environmental Protection Agency says that agriculture as a whole accounts for 10% of U.S. emissions.

At Hillside, the calves are fed milk from the dairy twice a day, along with free-choice dry hay and a limited ration of grain. At 3 months they’re weaned, and grain is removed from their diet two weeks before they are transported to Timshel.

Sitting midway between Charlottesville and Lynchburg, Timshel is a hub of the Savory Institute, a global nonprofit aimed at regenerating grasslands through livestock grazing.

Daniel Griffith, co-founder and director of Timshel, said the agreement with Hillside is a pilot program that he hopes to expand.

When the calves arrive from Hillside, they will spend a few months on the pastures at Timshel.

From there, the calves will be donated to other farms in the group’s producer network. Those farms will finish the cattle.

Timshel will assist with the marketing, which Griffith said is critical to keep the program viable.

“Once we can get more cows on grass, we can heal the local farm because they don’t have the input expense of buying animals,” he said. “But it’s important for them to have a market to connect local, regenerative farms to purchasers of the meat.”

The Savory Institute has provided funding for the pilot program, and Griffith said the goal is to have 10 dairies donating their calves by the end of 2022.

A well-managed rotational grazing system results in three times more carbon being sequestered than the cattle emit, he said.

“If that science is true, from a climate change viewpoint we don’t have enough cows on the landscape,” he said.

Scientists disagree about how effective grazing can be at sequestering carbon over the long term.

According to Griffith, the accepted standard for animal units on the land is one cow-calf pair per acre. In his system, that stocking density is doubled.

The key is to keep cattle grazing the grass. The more they eat, the more carbon is sequestered.

“As grass is regrowing after it’s grazed, it’s undergoing photosynthesis and converting carbon dioxide to oxygen. The grass is putting all of that carbon in its root nodules, which is feeding the soil,” Griffith said.

“As you get more grass growing, you need more cows to clip it, and in the end more carbon is sequestered.”

Dairy farms will be crucial to supplying the cattle for this grazing program because dairies produce a large number of calves that don’t carry much value on the market.

“It’s a misplaced opportunity,” he said. “The donation system allows a product that is considered a waste — dairy calves — to be transformed into an abundance by getting more cows on grass.”

The concept is a perfect fit for Hillside’s mission, Mozloom said, which has a strong focus on animal welfare.

Timshel will keep some of the heifer calves for breeding, and the others will have productive lives on grass and will ultimately benefit the food chain and local farms.

It also aids Hillside’s public image, which is a major consideration for the nonprofit farm.

The donation pipeline also changes the message that Krohnemann can give to visitors at the calf barn what the future holds for the animals.

“We can tell them it’s good, and it’s easier to explain because we feel good about the process,” she said. “With Timshel taking the calves, we feel better about the outcome, and we can convey that to the public.”

The National Holstein Convention is coming to Lancaster, Pennsylvania, June 20 to 24. Here are the farm tours that will be part of the event.

Out of the Ashes: Family Writes New Chapter After Barn Fire

When a fire destroyed their barn, these dairy farmers saw it as an opportunity to modernize their operation. It’s hard to tell who loves the changes more — the farmers or the cows.

Dairy Farm Perseveres in the Mountains of Bradford County

Dairy farming is never easy, but Triple M Farms in the mountains of Bradford County has had to overcome more than its share of challenges.