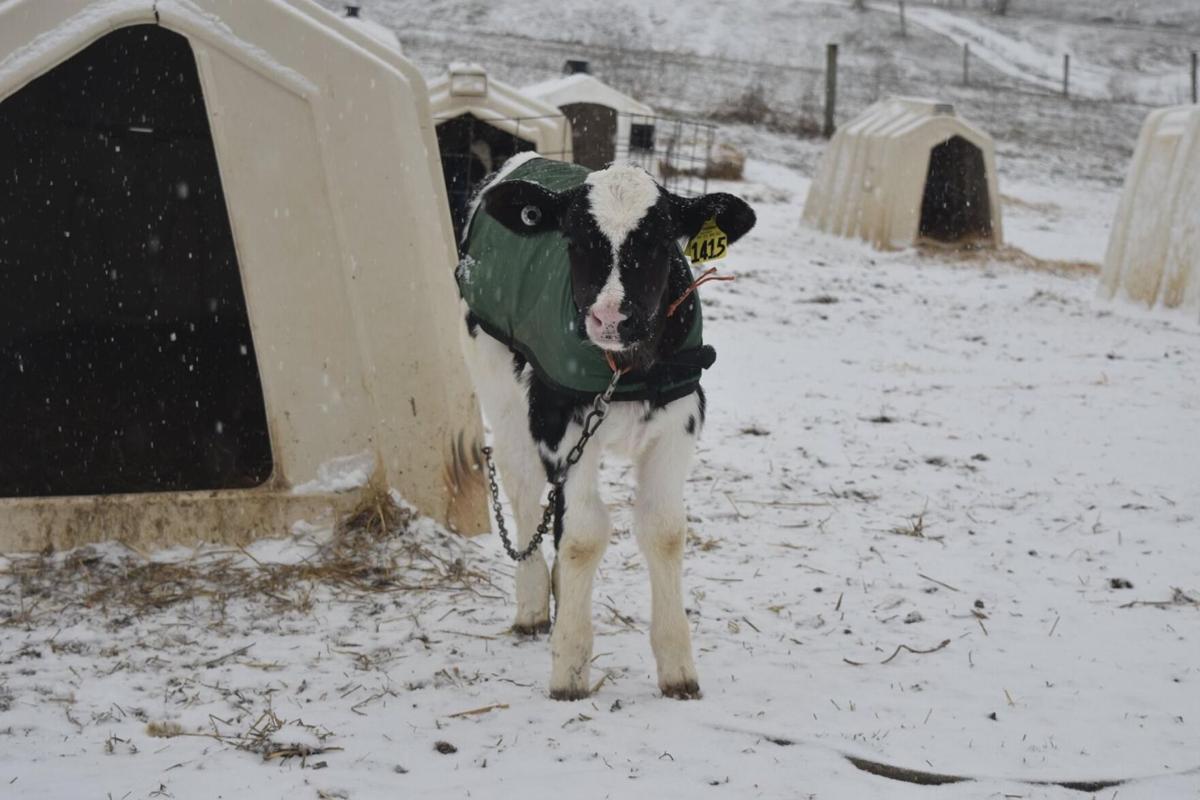 Young calves have a small amount of body fat and their bodies take a lot of energy to stay warm during cold weather conditions. Adequate amounts of warm milk and blankets can keep calves happy and healthy.

As we enter the winter season, we need to be mindful of situations where cold weather can play a role in animal health. In general, dairy animals can typically handle temperatures in the teens as long as they have protection from wind and rain. But if we drop below 10 degrees Fahrenheit, problems can occur, especially in baby calves.

Calves in individual hutches will be more susceptible than ones in a group pen, simply because the ones in a group can gather together and share body heat. Animals must burn energy to maintain their body temperature when it gets really cold. Young calves have very little body fat, and if their energy intake is not adequate, they can starve to death in just a few days of extreme cold.

I recall being called to a farm where three calves had died the previous night. I performed autopsies and found no body fat at all in them. The owner reported seeing one of them eating the straw bedding the night before. The calf was doing this in a desperate attempt to get some energy. Two quarts of standard milk replacer twice a day will not provide adequate energy for a calf alone in a hutch in severe cold. Consider adding a third feeding, or feed whole milk to prevent this. Also, provide a deep bed of clean straw to minimize heat loss from the calf to the ground.

Another concern in very cold weather is frozen teats on cows. This is most likely to occur if cows leave the milking parlor with wet dip on their teats. If they are exposed to wind, they can be even more at risk. It may be best to stop dipping when temperatures drop below 10 degrees, or take extra time to wipe the dip off before releasing the cows. The negative effect of not dipping is far less than that of a frozen teat. Fortunately, when temperatures are that cold, the number of viable germs in the environment is also greatly reduced. Make sure you take extra care to avoid animals having to lie in wet conditions. Moisture pulls heat from the body and prevents the hair coat from providing insulation. Most of us can probably appreciate that being cold and wet is far worse than just being cold.

One last indirect negative effect of extreme cold is the possibility of frozen pipes and water tanks. I recall once having a call from a producer whose cows had really dropped in milk production. I was aware of the temperature being close to zero and asked if he had checked the water supply. He called back a few minutes later to say that when he went to look, he noticed a lot of cows were standing at the water troughs, frustrated by the block of ice that was contained in each of them.

Of course this applies to dry cow and heifer pens as well where the drop in production would not alert us to the problem. During extremely cold temperatures this winter, remember the phrase “clean, dry and comfortable.” Keeping animals clean and dry is especially important in times of severe cold. Maintaining adequate energy, especially in baby calves, is also crucial.

Charles Gardner of Orefield, Pennsylvania, is a veterinarian and the business development manager with Cargill Animal Nutrition Consulting Services.

There's no one size fits all solution for sheep and goat bedding material. Here's how to weigh your options.

In response to an increased national demand for veterinarians, veterinary specialists and skilled technicians, Rowan University is establishin…