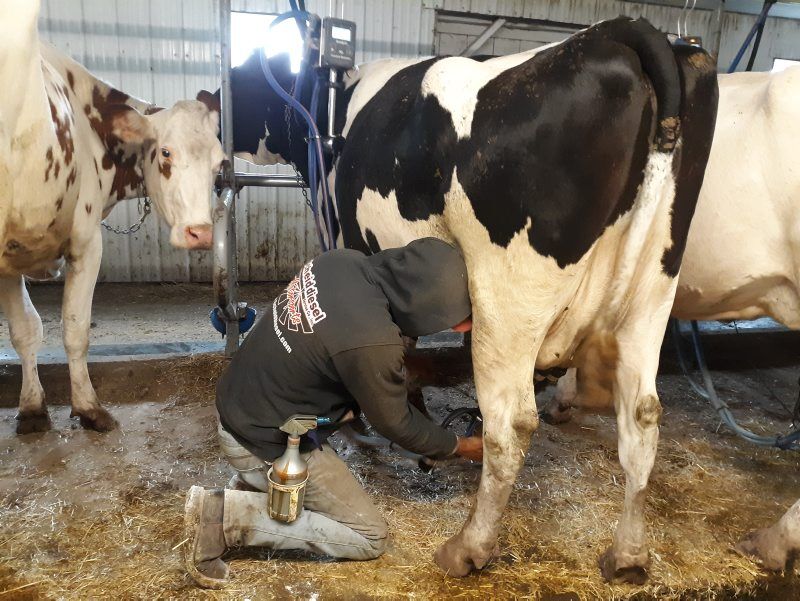 Martin Harvey hooks up a unit inside Frank Messersmith's tie stall barn in southern Bradford County. Several expansions to the barn increased the capacity to 100 cows, including 80 in the milking herd. 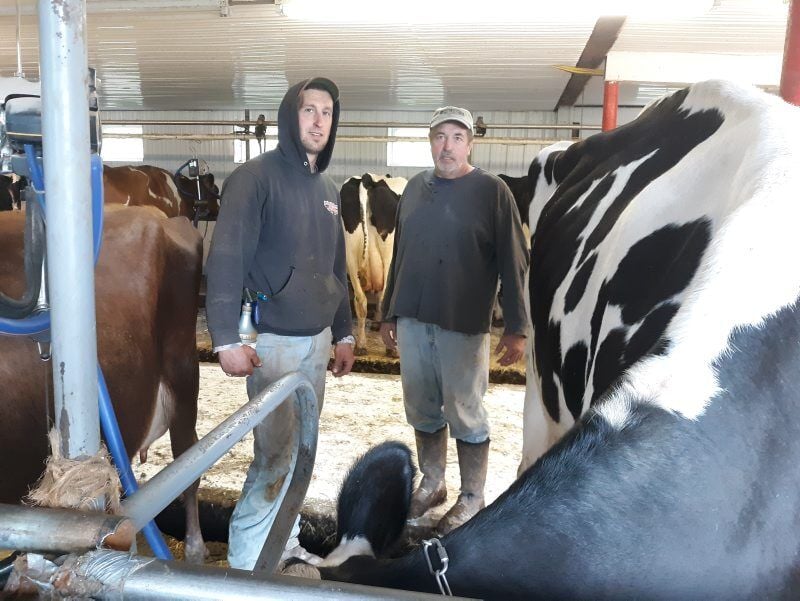 The biggest challenge facing dairy farms in his area is finding someone to eventually take over the operation, according to Frank Messersmith, right. Martin Harvey, Messersmith's employee, wants to keep this farm going. 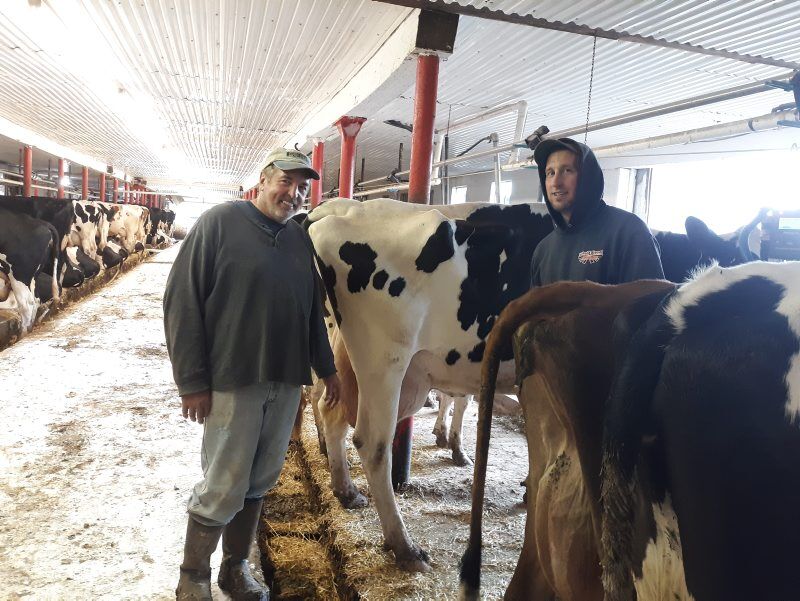 Frank Messersmith, left, with employee Martin Harvey during an afternoon milking. It takes them about two hours to milk 80 cows in a tie stall barn.

Scenery aside, the terrain that provides such beauty limits the size of the farms in the area. By most standards, Messersmith’s 80-cow dairy would be considered small. But in the mountains, the farm is one of the largest around.

“The topography of the land influences the size of the dairies here,” said Messersmith, who, along with his brother, Earl, is the fifth generation on the farm. “With the mountains, the growing season is shorter. We can’t double-crop here like they can in Lancaster County.”

But that hasn’t stopped the operation, which is called Triple M Farms, from expanding over time.

The farm was settled in the early 1800s by four brothers who arrived from Germany. There was a sawmill on a nearby creek where logs were floated and used to build barns in the area, Messersmith said.

According to his family records, Messersmith’s ancestors milked a few cows as far back as 1863, but when electricity arrived in the area in 1947, the cow numbers increased.

By 1969 the first bulk tank was installed on the farm. When Messermith, 58, was a child, the family milked 30 cows.

They increased the herd to 50 in 1981, when Messersmith graduated from high school and decided to farm full time.

In 2006, another 30 cows were added to the herd, consisting mainly of Holsteins, Red and Whites, and a few Jerseys.

“At that point our fixed costs were so high that we needed more cow numbers,” Messersmith said. “To do a good job, we needed more.”

Infrastructure expansion coincided with the growth of the dairy herd, and most of the work was done to make the farm more efficient. A second silo was added in 2006. The tie-stall barn was expanded twice and now spans 210 feet as a wing of the original bank barn.

“When we needed to add on, it was quite a bit of work,” Messersmith said. “But we had to do it or get out of the business.”

Messersmith feeds haylage, baleage and corn silage, along with a total mixed ration in the barn. The feeding process has improved greatly, he said, and he grows all of the forages on 500 acres in Bradford and Sullivan counties.

“I remember pitching silage out of the old wooden silo when I was a kid, and we used to feed all dry square bales back then,” he said. “The switch to haylage and baleage, along with going to TMR 20 years ago, it all saved us labor and gave us options with the weather.

“Today, we get more milk per cow than my father or grandfather ever dreamed.”

Out of the Ashes: Family Writes New Chapter After Barn Fire

Messersmith never had any doubts that his career path would lead back to the family dairy farm. The passion to farm and milk cows was always there, he said, and for years after high school he and his father, named Earl like Frank’s brother, ran the operation together.

The farm faced a major challenge in 1991 when Messersmith’s father died unexpectedly. Suddenly, Messermith, who was 27 at the time, faced the monumental task of running the farm by himself.

But he never considered giving up.

“It was my father and me for the longest time. But I knew how to farm and I knew the checkbook and the bills. It wasn’t like I had to figure it all out,” Messersmith said. “I never thought about getting out of the dairy. Never.”

While the Messersmiths have made improvements and expanded as much as the mountains will allow, some things haven’t changed.

Messersmith still turns his cows out twice a day on an expansive pasture behind the barn — after the morning milking and again at night. While many larger farms keep their cows contained in enormous freestall barns, Messersmith said the practice of putting the cows on pasture after each milking was commonplace decades ago on the smaller dairies that used to dominate the landscape.

Even though there is plenty of space and grass for the cows, he doesn’t rely on the pasture as a feed option. That part is taken care of in the barn.

But the pasture does reduce the amount of manure that Messersmith has to deal with, which is removed by a barn cleaner and spread every day.

“We don’t have manure storage, so the pasture helps us with that,” he said.

Off the farm, Messersmith stays busy serving as chairman of the Wilmot Township board of supervisors, president of St. John’s Lutheran Church, and a delegate with Dairy Farmers of America and Genex.

“I like the variety of dairy farming, and I really enjoy it,” Earl said. “It’s important for me to see this farm keep going.”

In fact, keeping a farm going is the biggest challenge facing dairies in this area, Frank said. At one time there were 50 dairies in the vicinity, he said, and today that number has dwindled to three.

“All of the dairy farmers are aging out. If milk prices were more stable and you know it could be counted on as a decent living, that would help with the next generation taking over,” Frank said. “The dairy industry of years ago shaped this landscape, but I think people overlook that.”

He has no plans to expand the farm further, but hopes it has a long future. Harvey, who Frank considers part of the team rather than an employee, has worked on the farm for 10 years and does have an interest in keeping it going.

And that hope is partly what motivates Messersmith to head to the barn at 4 a.m. each day for another morning milking.

The other motivation, he said, is simply a love of dairy farming.

“It’s a good life where you can shape your own future. I have friends that are retired now, but our days go so fast around here I can’t imagine that much free time,” Frank said. “I’m glad I decided to do this long ago. We made some wrong decisions along the way and we’re not a big dairy farm in the state, but we’re still here.”

Recent studies have found that consuming dairy could lead to lower cholesterol.