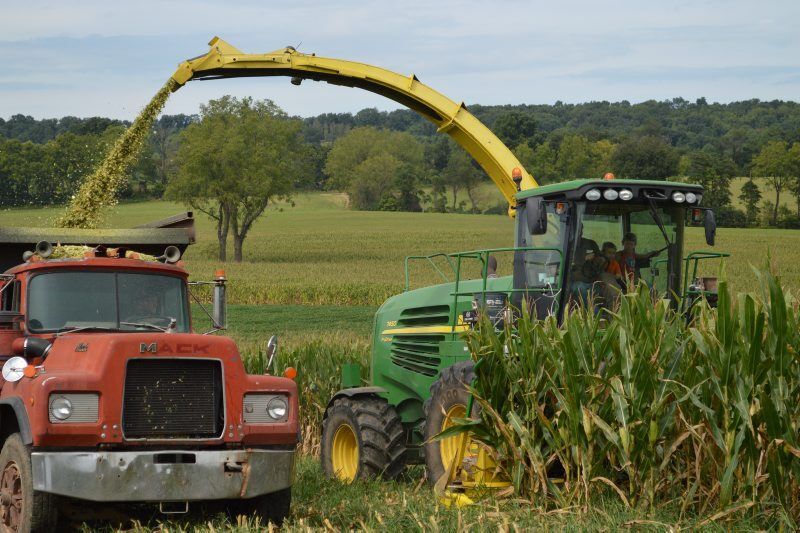 With the dry weather, Matt Hetrick drives the John Deere chooper through corn stalks for corn silage harvest as his cousin, Eric Hetrick, drives the semi-truck on Monday, Aug.31. in Bernville, Pa. 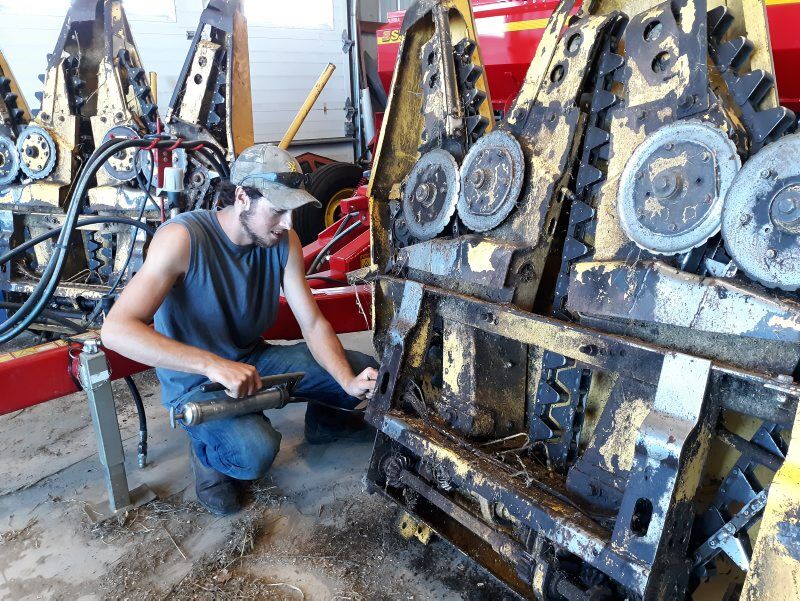 Dalton Vencak greases a chopper head in preparation for the silage season. Dry weather resulted in reduced yields in parts of the state. 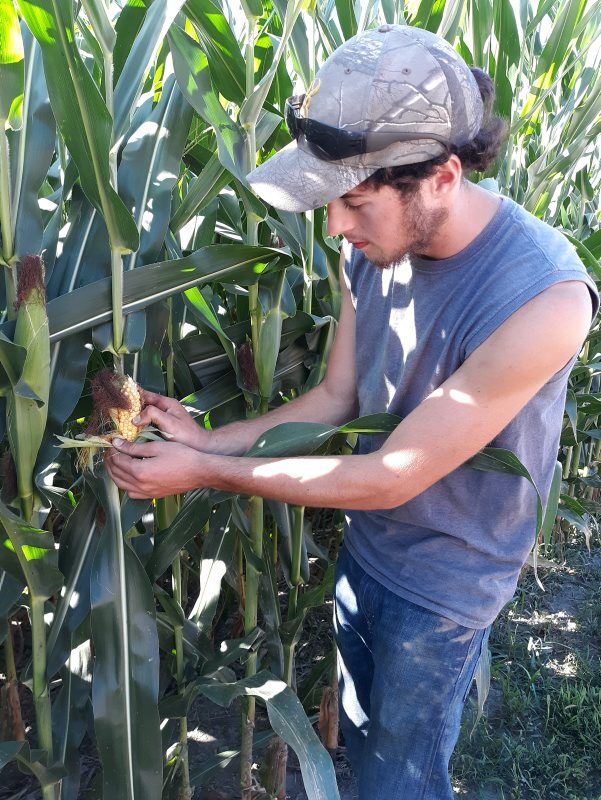 Dalton Vencak checks the milk line on an ear of corn to gauge the start date to begin chopping silage. While the dry weather may hurt yield, Vencak said the chopping season would begin after Sept. 1, as normal. 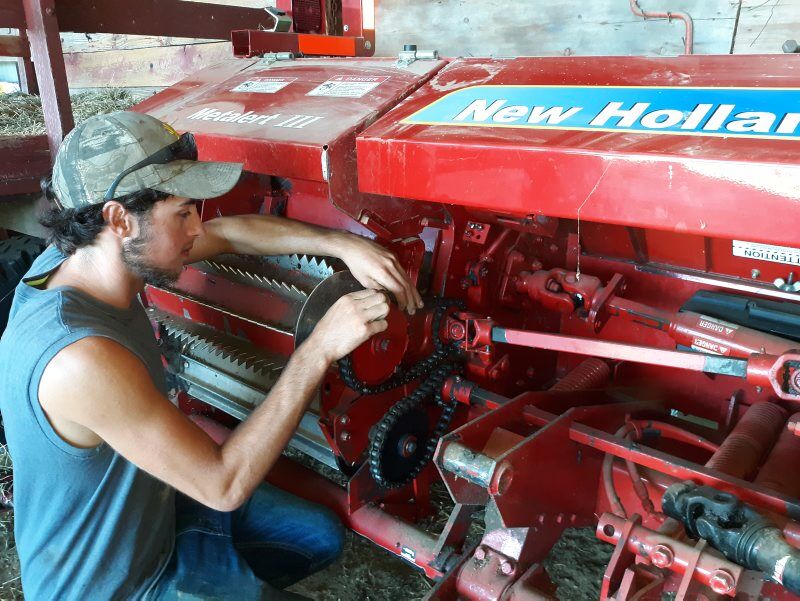 While Dalton Vencak didn't anticipate starting the silage harvest season until after Sept. 1, he prepared equipment well in advance just in case dry weather persisted and pushed up the start date. Vencak, who chops 700 acres of silage for a dairy farm in Luzerne County, said the dry summer weather limited ear size.

Kevin Whitehill watched 2 inches of rain fall from the sky on Aug. 28, but it didn’t matter.

By then, the silage was off and the damage from a dry, hot summer had already been realized.

“I’ve been here for 25 years and I never saw it this dry,” said Whitehill, who works for Paul Dotterer and Sons Dairy in Mill Hall, Pennsylvania. “We didn’t have rain for two months.”

The farm plants 2,000 acres in corn, and Whitehill chops approximately 1,400 acres for silage to feed the dairy cows and to sell.

During a normal year, Whitehill said, the farm averages 17 tons of silage per acre. But this year the dry weather cut yields by as much as 50%, and the per-acre average was down as well.

But that wasn’t the case everywhere in the Nittany Valley.

“At home we had less yield, but when you head north up in the valley, they got a few more showers and it was better,” Whitehill said. “It’s all across the board.”

And that’s the case across the state.

In Luzerne County, 70 acres of silage corn at the Bloss Family Farm in Hobbie was planted early this spring, but that didn’t necessarily bump up the start of the harvest.

Employee Dalton Vencak said the dry weather over the summer pushed back the harvest to what it normally is — early September — and the yield may be off.

“The rain wasn’t here for when the corn was pollinating, so the ears are a bit smaller than average,” he said. “The stalk size is a little better, and we had nice emergence for consistent stands, but the yield probably won’t be as high because the ear-to-stalk ratio isn’t as good.”

To compensate for smaller ears in the silage, Vencak said the farm will depend more on high-moisture hay to offset the need for additional grain in the feed ration.

“We had excellent hay quality this year, and that’s going to help,” he said. “The silage will be good, but we just didn’t have the ear size in some spots where the fields got really dry across the ridges.”

To the north, Casey Guindon, a Penn State Extension educator in Bradford County, said the silage harvest in that region is just getting underway after a warm, dry summer caused rapid drydown in the corn crop.

The western part of the state, Guindon said, saw even less rain.

“The whole plant is looking dry this year,” she said.

In the southeast, however, rapid drydown wasn’t an issue because that region benefited from timely rains.

One concern resulting from the dry weather, in addition to reduced yield, is the increased chance for nitrate toxicity.

When periods of drought are followed by rain just before harvest, Guindon said, corn can accumulate nitrates in the base of the stalk.

The problem can be exacerbated when silage is stored in upright silos, potentially causing the buildup of deadly gases such as nitrogen dioxide.

Guindon suggested farmers not chop silage immediately after a rainfall, if possible, or at least raise the chopper 12 inches to avoid cutting the base of the stalk.

“Once it’s in the silo, give it four weeks to ferment, and that should get rid of 50% of the nitrates,” she said.

It’s something many farmers will keep in mind as the silage harvest in some areas is close to wrapping up. Whitehill finished chopping silage at the Dotterer dairy by the end of August and is doing custom work through early September.

The dry summer, he said, was a continuation of a challenging year for corn.

“Even in the spring it was colder and wet, and it got to the point where we just had to go,” he said. “The early-planted corn ended up struggling in the summer heat, while the later corn turned out OK.

“Still, it was extremely difficult chopping silage that we need to stockpile for ourselves, and building inventory to sell to our customers.”

Young Farmer Gets Into Mum Business

JONESTOWN, Pa. — Attracting young farmers is a national challenge, which is why Wyatt Schriver’s story is encouraging. Read more