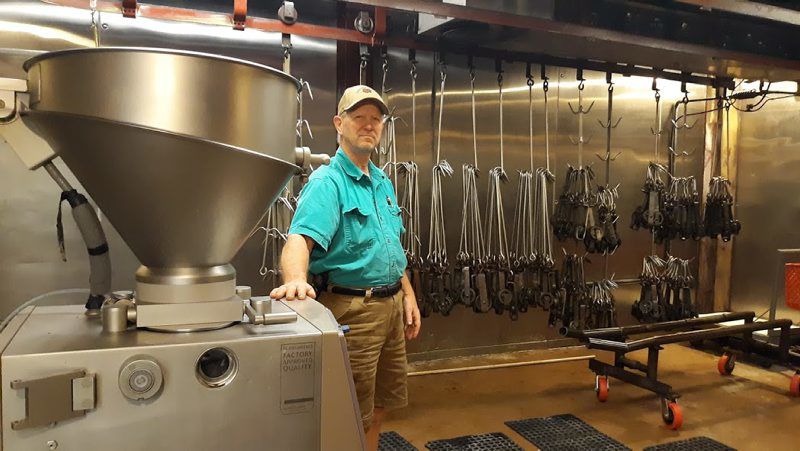 John Gensemer stands inside his butcher shop after wrapping up another season. When Gensemer reopens at the end of the summer, he’ll do so on a reduced scale, having eliminated the custom butchering part of his business. 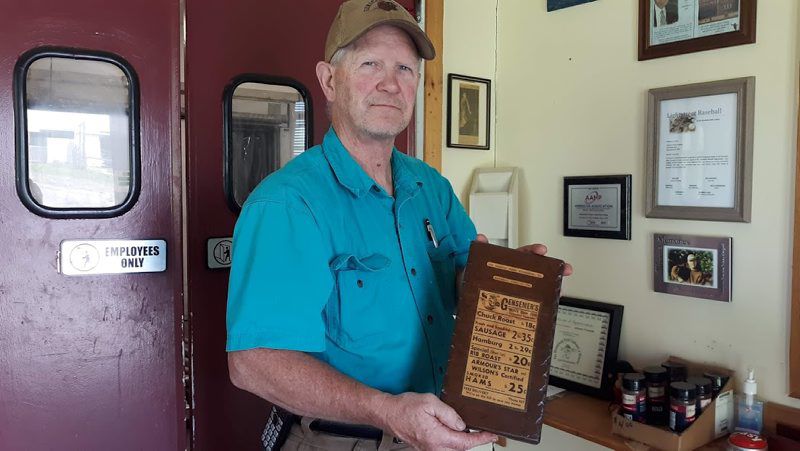 John Gensemer holds a framed newspaper advertisement from 1941, a reminder of how long his family has been in the butchering business. The ad offers two pounds of hamburger for 29 cents.

John Gensemer stands inside his butcher shop after wrapping up another season. When Gensemer reopens at the end of the summer, he’ll do so on a reduced scale, having eliminated the custom butchering part of his business.

John Gensemer holds a framed newspaper advertisement from 1941, a reminder of how long his family has been in the butchering business. The ad offers two pounds of hamburger for 29 cents.

BLOOMSBURG, Pa. — It wasn’t easy for John Gensemer to decide that now is the time to get out of the custom butchering business.

Gensemer is a fourth-generation butcher, following the footsteps of his great-grandfather who opened a shop in Bloomsburg in 1900.

Gensemer opened his own shop, Gensemer Meat Co., outside of town in 1983, and since then has processed an average of 500 cattle and 350 hogs annually.

But almost immediately after Gensemer determined in June he would no longer butcher beef and hogs for local farmers, he was faced with a situation even more difficult than the decision itself.

“I had a lot of good customers that depended on me for a long time. It’s hard to tell them no, but I have to,” Gensemer said. “I didn’t expect word to travel that fast after I made the decision. I got calls right away, and I’m still getting them every day.”

Gensemer, 66, said he is downsizing and not completely retiring from the meat processing business.

Costs were escalating, especially for employees and supplies, at the same time cattle hide prices hit rock bottom and he started having to pay to get the offal hauled away.

He was charging farmers 70 cents per pound hanging weight to butcher a quarter beef, plus a $75 kill fee. To go any higher would be impractical for his customers.

“The cost of having employees with taxes, benefits and worker’s compensation, it’s killing me. I would have to raise my butchering rates exponentially and that cuts into the profit for the farmer,” Gensemer said. “I didn’t want to go higher.”

He is keeping the 119-year family tradition alive, albeit on a smaller scale.

Gensemer will continue to cut quarters and sides of beef from the cattle he raises, provide custom curing and smoking of hams and bacon, and process deer during the archery season only.

Essentially, Gensemer is only doing the work that he can handle himself.

And it’s a job he knows well.

He’s worked in the family business for most of his life, beginning when he was 10 years old. Before that, Gensemer always wanted to cut meat in the shop.

He remembers his dad dulling his knife so he wouldn’t cut himself but could still feel like he was helping.

After he worked away from the business for a few years in the early 1980s, Gensemer got the chance to get involved on a larger scale when his father gave him a portion of the farm to build a shop in 1983.

“I saw a demand for custom slaughtering, and I wanted to get back into it,” Gensemer said. “I think that demand has continued to increase as people want to know where their meat comes from and, in this area, the local farmers could meet that demand.”

Still, Gensemer has seen plenty of changes in the demand for local beef. There’s been a push for Angus beef in recent years, he said, along with grass-fed cattle.

He’s not sold on either.

“I don’t care what color the cow is. The quality is all in how they’re fed,” Gensemer said.

He sees a big difference between grass-fed and grass-finished beef.

“Pennsylvania doesn’t have the growing season to finish beef on grass. The marbling isn’t there like it is when they’re finished on grain,” he said.

Perhaps the most painful change to the business — and one that played a role in the decision to downsize — was the 2014 death of Gensemer’s younger brother and business partner, Daniel.

“He was someone I could count on. Without him, there’s a lot to oversee in this business,” Gensemer said.

USDA-inspected processing, which is required for farmers to sell their meat, involves a lot of recordkeeping, pricey equipment and regulatory compliance.

Many small shops have difficulty finding and retaining skilled workers, and they spread their costs across fewer animals than the big packers do.

Between 1990 and 2016, the number of federally inspected establishments fell by a third, to 800 nationwide, according to the Niche Meat Processor Assistance Network.

Many of those challenges apply to the Gensemer family as well.

Both of Gensemer’s nephews are accomplished butchers, but they have jobs that pay more than they could make at the shop.

“The business is there for them. It’s just the overhead that makes it tough financially,” he said.

While the yearly routine inside Gensemer’s shop remains unchanged — the butchering season wrapped up in June, and the equipment has been cleaned and repaired — when he opens back up at the end of summer, things will be different.

There will be no employees reporting to work and no farmers bringing in their cattle and hogs. Last year, Gensemer processed 459 cattle for area farmers, totaling a half-million pounds of beef.

While Gensemer admits it was hard to tell his customers that he will no longer butcher for them, there are a few positives already surfacing with the change.

“I’m a lot less stressed and I’m looking forward to doing what I can do myself,” he said. “I’m 66, and most of my friends in other jobs are retired by now. But this is what I love to do and I don’t want to get out of it completely.”