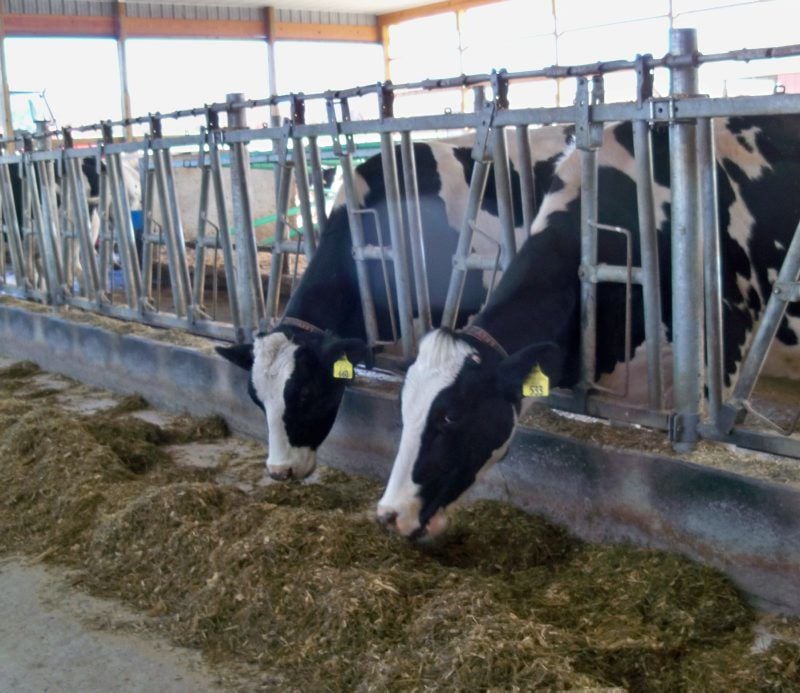 Cow comfort is important on the Canon Dairy Farm. 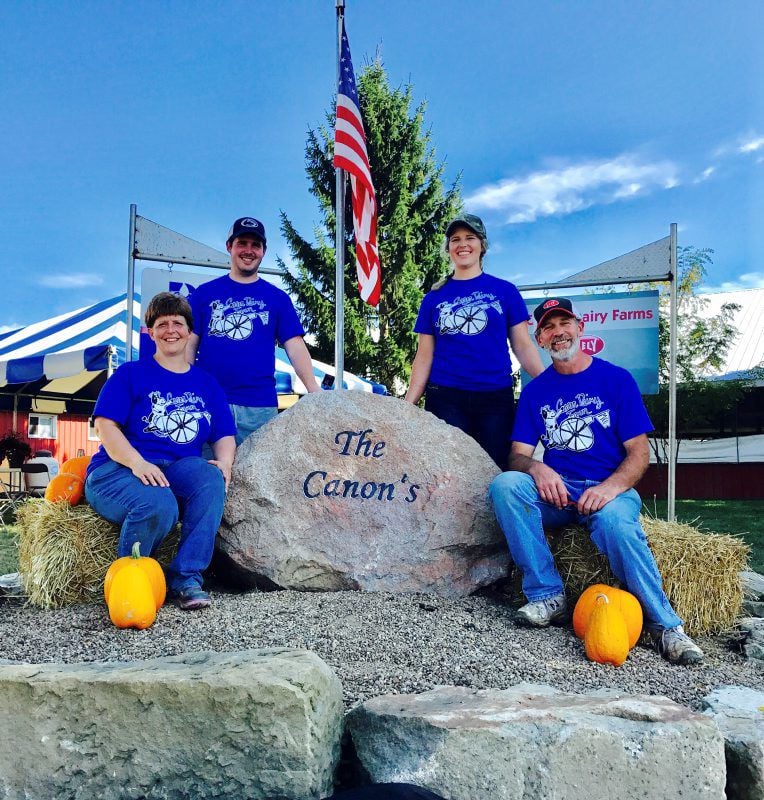 Trent Canon and Josie (Canon) Offerdahl (standing) and their parents, Marie and Mark Canon, are planning for the future of their dairy farm.

But Marie Canon of Canon Dairy Farm took some time to talk about her family’s plan for the future, which depends on keeping the next generation on the farm. The Canons hope to achieve that by investing in technology.

The plan hit a few bumps in the road, mainly due to the COVID-19 pandemic, but the Canons are back on track now, with an energy project in place and plans to break ground for a creamery in the next few weeks.

“We installed an array of solar panels on the barn roof early this spring,” Marie said.

Her husband, Mark, has been contemplating solar for a while, but the installation was done just prior to the closing of all nonessential businesses.

“The panels were there, but none of the electrical connections were done,” she said. “We had this investment, but we couldn’t use it. It was very frustrating.”

She and Mark were even more frustrated when they took a 10-mile drive to see friends in nearby Ohio and saw people all over the golf courses. That didn’t seem like an essential business to them.

Their electrician could not hook up the solar system without facing the possibility of fines and losing their business license.

So the Canons waited, and the waiting is finally over. The net-metering system is now up and running.

Net metering means that after the system provides what is needed for the dairy operation, the excess goes onto the power grid. When the system doesn’t provide enough for the farm, electric is provided by the power company.

“The nice thing is that it is automatic,” Canon said. “We don’t have to flip any switches. The downside is that if the grid goes down, we don’t have any power either.”

The Canons could add battery storage in the future.

There are tax incentives. Jordan Energy of Troy, New York, did the installation and helped the Canons get a USDA Rural Development grant to defray some of the equipment costs.

“Solar systems have really improved over the years,” Canon said. “At one time they were very heavy and cumbersome to install. These panels are very light. I could easily pick one up and carry it.”

Their system has a kilowatt peak rating of 96.9, which is the amount of electric energy it can generate at its peak performance. With 262 roof-mounted panels and seven inverters, the Canons’ system can provide 140 to 650 kWh per day.

It’s part of the Canons’ transition to the next generation. The couple have five adult children. Two of them have made the decision to return to the farm.

The farming operation is now a partnership between Mark and oldest son Trent. Trent, 28, is a Penn State graduate with a strong background in agronomy.

This part of the business includes Mark, Marie and their daughter, Josie Offerdahl, 22, who said she gained an appreciation for the work that goes into dairy products during her time as county dairy princess several years ago.

Now, she’s excited to be doing that work as part of the family enterprise.

“I always wanted to make something, but I just didn’t know what,” she said. “I tried making cheese and found I really enjoyed doing that.”

Like the solar installation, the creamery development was also set back by the pandemic.

In early March, the Canons approached their township’s planning commission for a building permit. It was denied because the proposed building would be too close to the road.

The Canons asked for a variance, which requires a hearing, but that was stalled because the township was in lockdown and could not conduct any public meetings.

“Finally, in May, we were granted a meeting by phone,” Canon said. “We were on the phone for about 20 to 25 minutes. The planning commission went into executive session and called back with a favorable decision.”

The Canons anticipate breaking ground for the new creamery by July 1. The equipment has been ordered, and processing could start as soon as this fall.

“The plan is to start small,” Marie said. “We plan to process and bottle pasteurized, not homogenized, milk in glass and make soft cheese, like ricotta. Josie wants to also make butter.”

With a grant from the Pennsylvania Center for Dairy Excellence, the Canons were able to take advantage of the grant-writing skills of Phil Taylor from AgChoice Farm Credit.

He helped them obtain a $50,000 grant from the Pennsylvania Dairy Investment Program. These funds will be used for the equipment for the creamery.

The Canon family has been in the dairy business for a long time. Mark’s great-grandfather started the farm in 1903. His grandfather added a processing plant and did home delivery with Mark’s dad, Leroy, in the nearby steel town of Farrell in the late 1950s and early ‘60s.

Mark and his father built their first parlor in 1982, and there have been three upgrades since, including the recent installation of two robotic milkers.

The family milks about 100 Holstein cows, and when the Canons decided to expand, their plan was to provide added-value products for local consumers rather than increase the size of their milking herd.