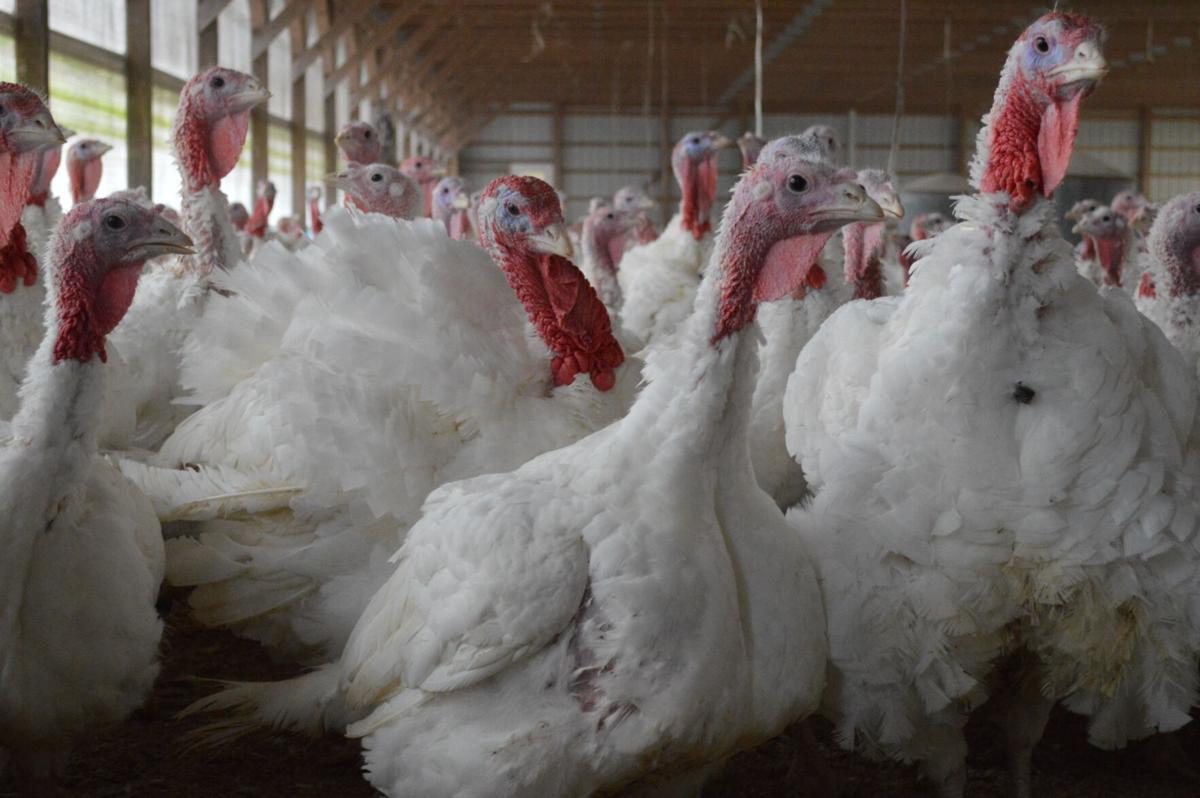 Nicholas White turkeys, a cross of White Holland and Broad Breasted Bronze, at Ashley Farms in Flanders, NJ., are ready for the holiday market. The family farm raises and process over 7,000 birds a year. 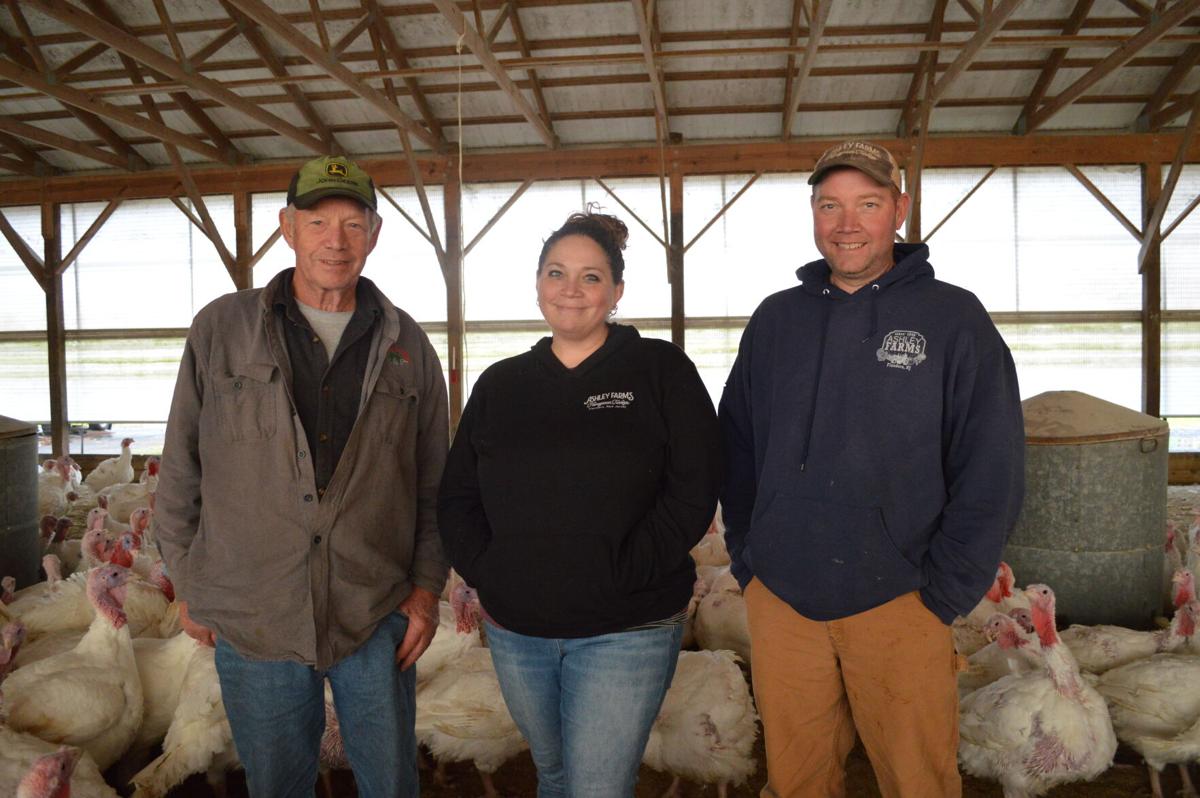 From left, Larry Ashley, his daughter, Aimee, and son, Scott, stand in one of their turkey houses. 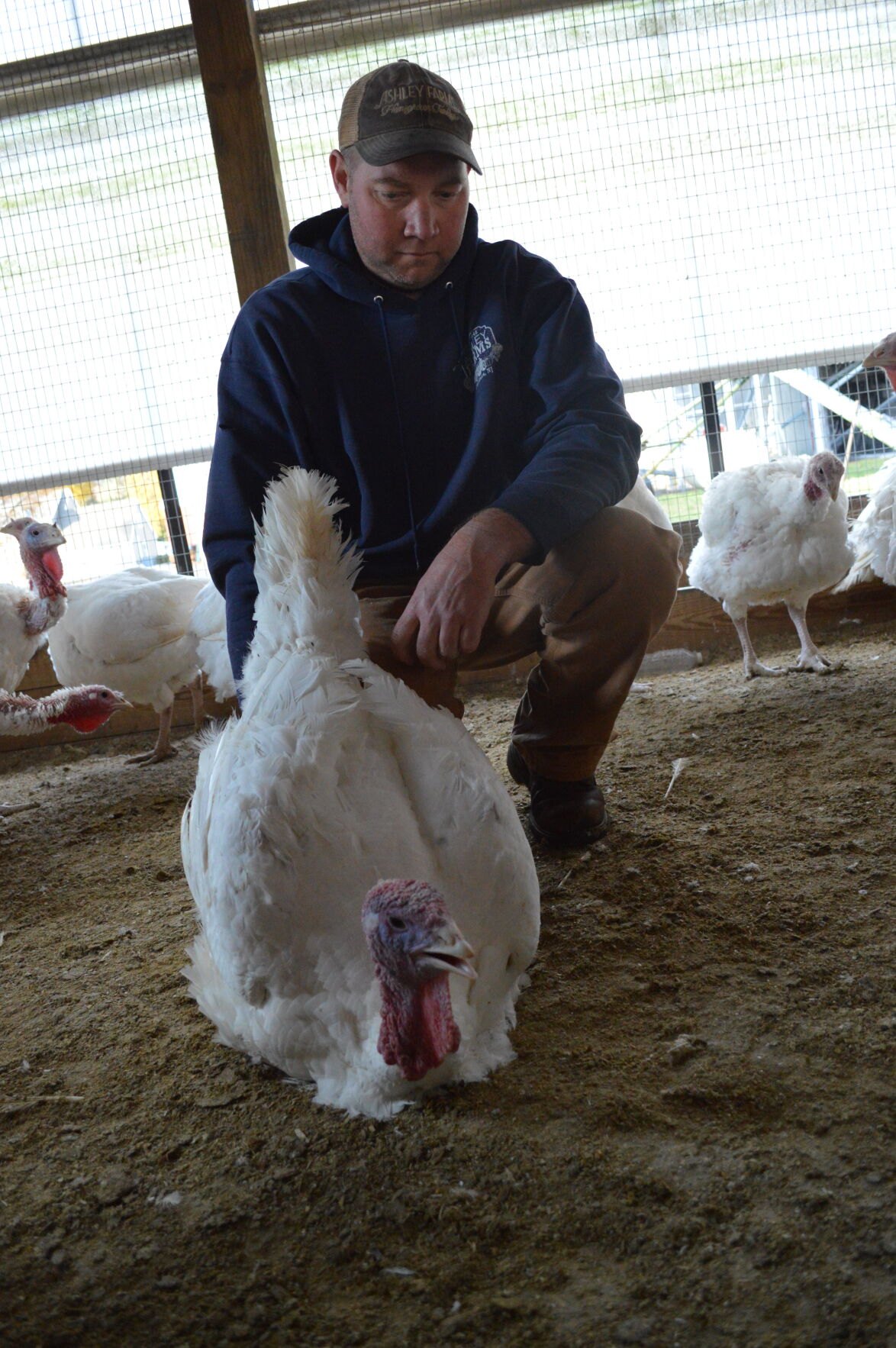 Scott Ashley holds one of 7,000 white Nicholas turkeys in his Flanders, N.J., barn. Ashley specializes in raising the crossbred birds for Thanksgiving dinners. 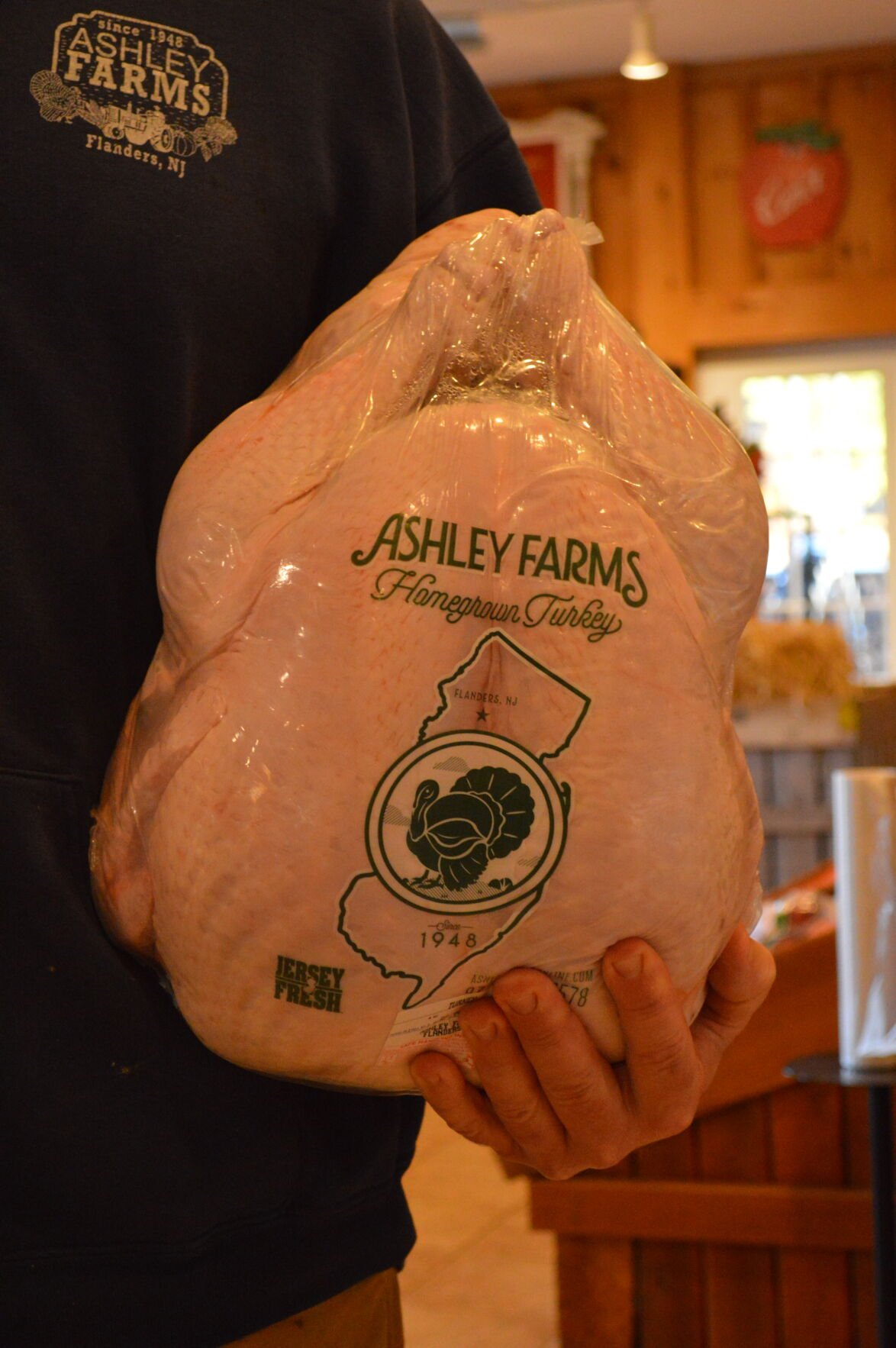 Whole Thanksgiving turkeys at Ashley Farms average 18-25 pounds, but some can weigh as much as 50 pounds.

FLANDERS, N.J. — Scott Ashley’s Thanksgiving preparation got off to a rocky start way back in May when he couldn’t locate turkey pullets.

He placed his usual order with a West Virginia hatchery, but the U.S. Postal Service apparently forgot to scan the birds prior to their 500-mile journey to Ashley’s farm in Morris County, New Jersey.

“I was worried sick,” he said. “Nobody knew where they were.”

Ashley — who raises turkeys for the holiday season with his father, Larry, and sister, Aimee Ashley Myers — eventually got the call from the local postmaster that Thanksgiving dinner, or what would be Thanksgiving dinner for thousands of customers, had arrived.

Ashley’s grandfather, Hubert, started the family turkey business nearly 80 years ago. A neighbor gave Hubert the first turkey for his small coop in the 1940s.

The birds are just 12 days old when they arrive in the spring. At that age they are small and frail, which means they require a lot of attention.

Larry gets a kick out of watching the birds when they first arrive and flock to the bright red water containers laid out on the floor of the barn.

“They come out of a box at midnight and start drinking right away,” he said. “It’s amazing.”

Weather plays a big part in how Scott manages the birds during the first few weeks. During cold spring weather, the little turkeys stay warm in an 85-degree barn, which works well unless the heater breaks.

“They’ll pile up to keep themselves warm,” he said. “They’ll snuggle each other to death.”

If the spring weather turns humid, Scott makes sure there is good ventilation in the houses. The birds can become overwhelmed by drastic changes in temperature.

“It can be a real headache,” he said.

The birds take up to a week to settle in. This year the Ashleys hired a high school student to help them monitor the birds during the evenings in the transition period.

Scott and Larry feed the turkeys a custom recipe of conventional corn and a poultry concentrate, which is primarily soybean meal with vitamins and minerals.

When the birds are young, they get big portions of concentrate to build the bone density needed to support the weight they’ll soon gain. As the turkeys grow, the proportions are adjusted, providing more corn than concentrate.

“They are always on some level of concentrate because if you feed them all corn, they get fatty,” Scott said.

The family raises Nicholas White turkeys, a cross of White Holland and Broad Breasted Bronze. The Ashleys gravitated to the breed in the 1960s for its traits of fast growth, quantity of meat, quality of taste and presentation.

Nicholas Whites are a well-rounded turkey that looks nice after processing, unlike the Bronze breed, said Aimee, who manages the farm store.

The Ashleys and a dozen helpers — a mix of family, friends and employees — process turkeys once a week from September to the week before Thanksgiving. An average of 350 birds are killed and cleaned on a typical processing day.

“If the turkeys aren’t too big and everything is going just right, we can do 100 an hour,” Larry said.

After the turkeys cool down in tubs of ice, the crew vacuum-seals the carcasses and moves the consumer-ready product to a cooler or freezer.

“Frozen turkeys get a bad reputation because of what they sell in a supermarket,” Aimee said.

She believes those birds start off well, but the bags get ruined and the carcasses are often damaged during transport or when they are moved between freezers. Her family takes a more careful approach, she said.

The Ashleys spread their turkeys out on freezer racks and don’t move them until Thanksgiving time. Larry checks the freezers and coolers regularly to make sure they are operating at optimal temperatures.

A whole turkey at Ashley Farms can weigh 12-50 pounds, but most are in the 18-25 pound range. Customers prefer a 25-pound turkey for Thanksgiving, Aimee said.

Ashley customers have been coming back for generations, she added. Many are locals, but some travel from New York and Pennsylvania.

Aimee says it’s not just because her brother and father raise quality turkey. Customer service and transparency have a lot to do with it.

The farm has an open pen so the public can see the living conditions — clean bedding and ample space to roam.

“We are very matter-of-fact about it. The turkeys have the best life that could have, but they’re raised for meat,” Aimee said. “I think they (customers) feel better about buying one from a small family farm than from a farm they might consider a corporate farm.”

Aimee and the farm market staff spend a lot of time fielding questions about production and slaughter, but many of the questions, especially from new customers, are about how to cook a whole turkey.

“It’s an intimidating meal for many people,” she said.

Thanksgiving is a busy time, but so is Christmas. The family sells over 400 turkeys for the December holiday. When the farm store is bustling, Scott and Aimee bring in reinforcements — the fourth Ashley generation, their children, helps out with holiday orders.

Larry, 73, enjoys watching his grandchildren get involved in the care of turkeys and the farm.

And that makes Scott hopeful for the Ashley legacy.

Esbenshade Turkey Farm has been a family-owned operation now into its sixth generation. This year, they're gearing up for what they hope will be a season of large turkeys.

Will Thanksgiving Turkey Prices Gobble Up Your Wallet?

With Thanksgiving just around the corner, many consumers are concerned about getting their traditional Thanksgiving turkey, and at a reasonable price.

Washington politics may be more complicated than ever, but that couldn't stop the yearly tradition of pardoning turkeys.