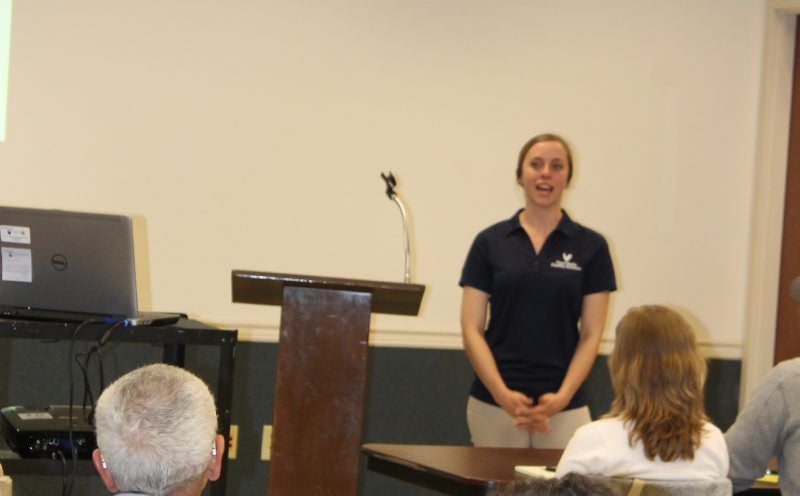 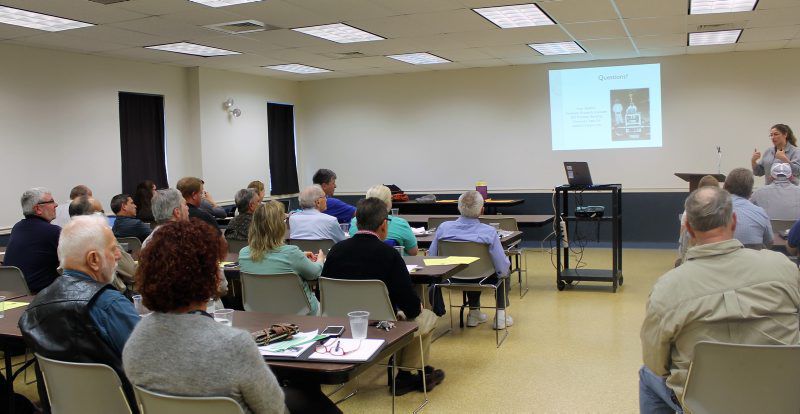 Amy Barkley describes the research she’s begun on alternative forms of poultry bedding that can be grown on the farm and returned to its soil.

Amy Barkley describes the research she’s begun on alternative forms of poultry bedding that can be grown on the farm and returned to its soil.

LANCASTER, Pa. — Farmers have been referred to as the first environmentalists. Their livestock and crops depend on a healthy environment to thrive. Still, there’s often room for improvement.

According to some early findings from a study by Penn State graduate student Erica Rogers, poultry producers are potentially lowering their impact on the Chesapeake Bay.

Rogers joked that her study “involved playing with a lot of poultry manure.” Her project’s goal is to accurately depict poultry’s contribution to the Chesapeake Bay Total Maximum Daily Load.

The Chesapeake Bay “is one of the most studied watersheds in the world,” she said, but the problem with the current model is “they are using outdated information for poultry.”

Rogers built her work around the concept that poultry litter management has changed and farmers have adopted more precise diets for their flocks.

Organic and antibiotic-free production systems also were not as common in the 1990s as they are today, she said.

Once the project is complete, Rogers’ goal is to have the new data included in the Chesapeake Bay Model.

Single-cycle systems change the litter after each flock of birds. A buildup system runs several flocks through the barn before cleaning out the litter.

She studied the manure from three flocks for each system type, collecting samples just before the litter was applied to the field to obtain the most accurate data.

Each farm’s samples were combined to make a composite sample and then sent to the Penn State Agricultural Analytical Services Laboratory for testing.

Rogers recorded the weight of the manure either with an axle scale or by subtracting empty weights from the weight tickets for tractor-trailer loads.

Based on her studies, the kilograms of nutrients per metric ton of litter are 22 percent lower than previous calculations for nitrogen and 29 percent lower for phosphate.

The potash results were similar to past calculations.

Rogers said she is excited about the finding because it could assist farmers who are limited by phosphorus in their nutrient management plans.

“This is good news in regard to the (Chesapeake Bay) diet,” she said.

Rogers said she’s evaluating turkey and pullet systems right now and will wrap up her study with an evaluation of broiler breeder and layer breeder flocks.

In her study, Barkley is looking at bedding alternatives from renewable resources such as miscanthus, switchgrass and willow.

The idea is that farmers could create a carbon-neutral system in which the bedding is grown on the farm and harvested for use in the broiler house.

Earlier Penn State studies had begun to evaluate some of those options.

Barkley said her first studies used chopped miscanthus and compared it with sawdust and wood shavings.

She said she started to notice how dusty the sawdust was compared with the miscanthus, which started her thinking about particle size.

The bedding with larger particles of miscanthus would develop a mat on the top that would prevent the manure from working its way down into the bedding. Breaking through the mat, Barkley would find that the lower layer would still be dry.

Barkley started her first switchgrass trial in 2016. She apportioned the houses into pens with various degrees of fine to coarse chopped switchgrass to compare with conventional poultry bedding.

She said she used slow-growing Redbro broilers for the study so the litter would accumulate for a longer period.

The quarter-inch chopped switchgrass tracked close to standard shavings in performance, while the longer cuts lagged in comparison.

One difference was that the finer switchgrass, because of its density, did not compact as much as the control bedding.

Litter moisture did not differ much between the groups, Barkley said, but breast cleanliness and footpad scores were worse for the birds on the longer chopped switchgrass.

She’s just started a willow study to see how chopped willow would perform.

Although she is only two weeks into it, “one of the cool things about willow that we saw is it does not cake,” Barkley said.

She wonders if the willow’s cylindrical chips might facilitate the birds moving the manure farther into the bedding.

While she is still crunching the numbers and data, Barkley said signs are looking hopeful for the bedding alternative.

She said it takes 2 to 4 acres to generate 3 to 4 inches of bedding in the house. And like all crops, methods of storage and harvest make a difference in the quality of bedding.

The driver of a John Deere tractor who was traveling along Route 322 in Clay Township Friday morning was sent to the hospital for multiple injuries after a sedan struck him on the road, according to police and emergency officials.  Read more

How to Improve Long-Term Asparagus Crop: It's All About Soil Prep

Building up organic matter in your soil will allow asparagus roots to grow deep, keeping the plant producing year after year. Read more