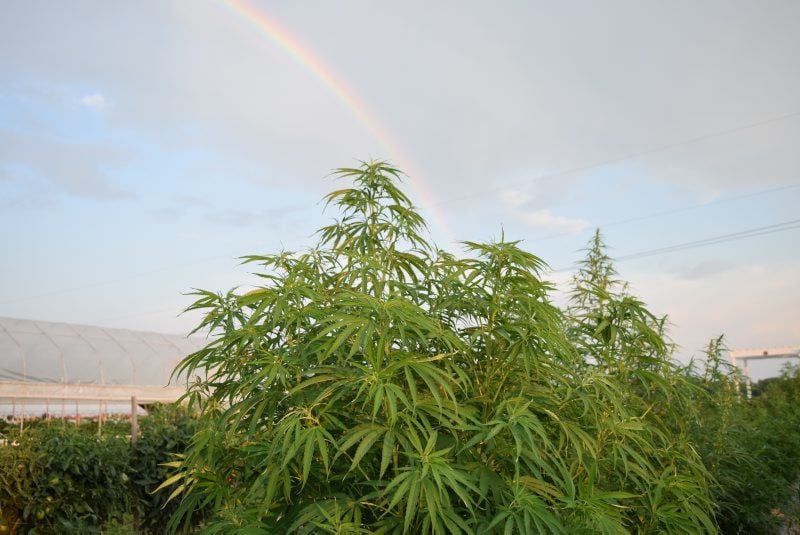 A rainbow appears over the Penn State Research farm during their hemp field day. 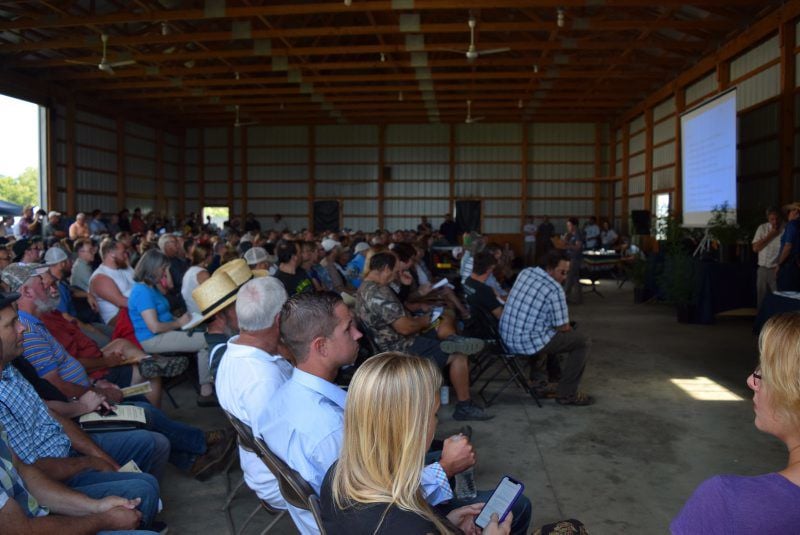 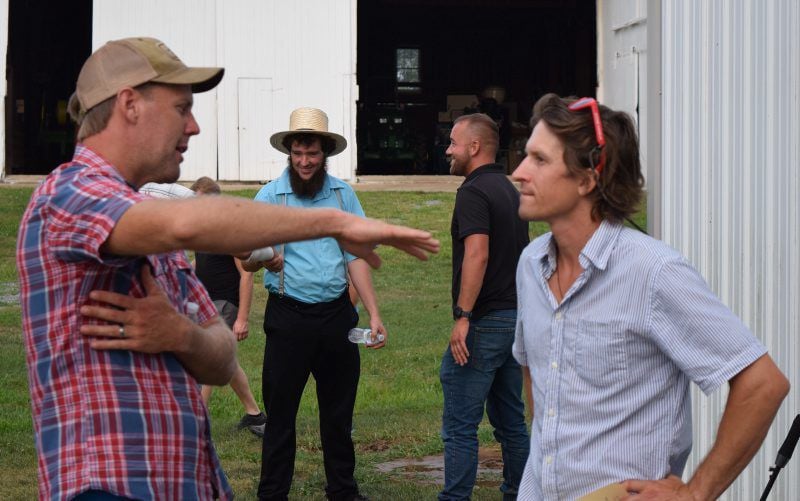 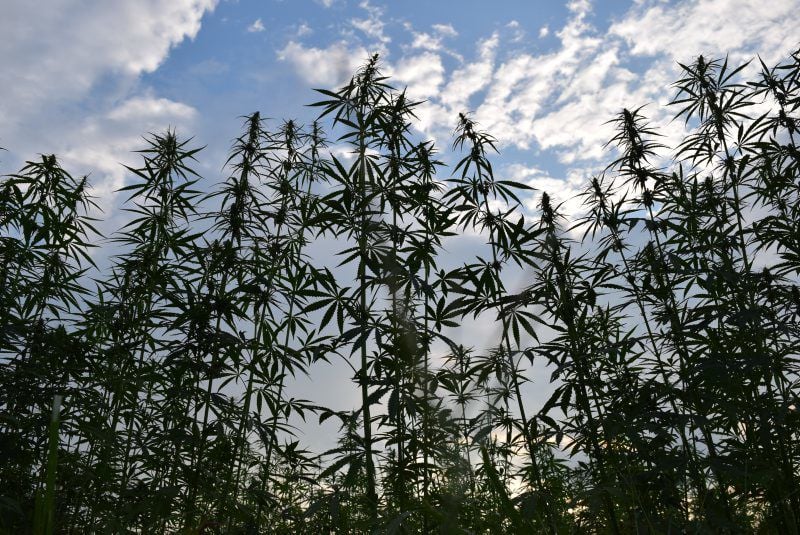 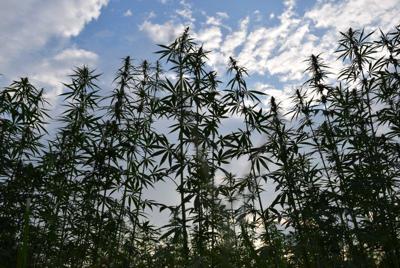 LANDISVILLE, Pa. — They thought they had a pretty good turnout last year at the Penn State hemp field day with a 160 in attendance.

This year’s event, held at the Southeast Agricultural Research and Extension Center, drew more than 360 attendees eager to hear a wide range of farmers, processors and hemp experts tell their stories and answer questions.

The unspoken theme of the night was “we’re all in this together” and it seems that people in the hemp industry have an uncanny willingness to share their knowledge with others.

The pole barn was filled with rows of chairs, but the large crowd spilled out the doors. The audience was split between farmers who are growing hemp this year, farmers who are thinking about growing it next year, people who have businesses related to hemp, such as processors and manufacturers, and others who are trying to figure out the best way to get into a hemp business. They all had a couple things in common: curiosity and the desire to learn more.

Paul Hamerly drove all the way from Ohio.

“I’m what’s called an angel investor,” he said, “so I invest in companies in the early stage.”

What surprises him most about the burgeoning hemp industry is all the ancillary business that can be generated, not just the farming side of things, but the extraction, the processing, and the testing labs. He likes this industry from an investment point of view because, he says, “there’s lower risk than if you’re getting into a crowded market.”

Kathy Sotak, originally from a farm in North Dakota, but who lives in Chester County now, is fascinated by the parts of the hemp industry that go beyond the growing as she considers her next career move after years as a corporate executive.

“I’m still in the education mode and learning about what the biggest needs and opportunities are, with an eye on the local supply chain and what’s needed to make the local supply economy work sustainably for the hemp industry,” she said.

Another curious attendee was Danielle Friel Otten, a member of the Pennsylvania House of Representatives from the 155th District of central Chester County, who was propelled to run for office because of the Mariner East pipeline that runs through her backyard.

She was very excited, first to be elected, and then for the Farm Bill to pass less than two months later.

“I felt like, OK, God put me here to do this work, so let’s get this moving,” she said. “Let’s get this (hemp) industry rolling in Pennsylvania so we can be the solution to the problems we’re facing.”

She is hopeful that, as the hemp industry develops, it will help the country “off ramp” from fossil fuels and transition away from petroleum-based plastics.

While many people put great hope in hemp as an envelope-pushing agent of change, the main business of the night was to talk practically about farming it, processing it, and selling it. And the agenda of the evening reflected just that.

After introductions by retired Penn State agronomy professor Greg Roth and current director of the research farm Alyssa Collins, Sarah Pickel of the Pennsylvania Department of Agriculture gave an update on the state program, followed by an industry update from the National Hemp Association’s Geoff Whaling and Ericka Stark.

Hemp farmers Jonathon Steffy of Speedwell Forge Organics and Sue Frey from Future View Flowers each presented detailed descriptions of their hemp operations, and while each farmer is growing CBD hemp, their growing practices varied widely, showing at a very basic level that there is no one right way to grow hemp.

Extension educator Krystal Snyder then led a panel discussion between Pickel and Corey Fritz from PHR Labs about best practices for monitoring for CBD, testing for THC, and compliance with the state’s testing requirements.

Next up to discuss harvesting and drying of CBD hemp crop were Cover Crop Coach Steve Groff and Berks County farmer Ben Davies from Wildfox Provisions.

Davies, who grew hemp for the first time last year on a research permit, is among a handful of Pennsylvania farmers with first-hand experience in growing and harvesting the crop. For everybody else, it’s brand new.

“If you think your season has been challenging so far,” Davies said, “get ready for a wake up call in a couple of weeks from now, because you have no idea what you’ve gotten yourself into.”

He went on to describe harvesting CBD hemp as the most labor-intensive, most time consuming, and all around busiest time of the entire season, his farm having logged nearly 400 hours last year to harvest and dry a single acre.

Once the crop is harvested and dried, what happens next? How do you find a market? Speaking to that was Jake Sitler, the head of the Lancaster County arm of Floyd Landis’s CBD brand Floyd’s of Leadville, which has contracted 50 farmers to grow 65 acres of hemp in the county and retails product in many local chain stores including Sheetz and Rutter’s.

Attendee Jim Schroll was surprised to learn how labor intensive the crop is. He said he was less interested in growing hemp after hearing the night’s discussion than he was when he first arrived. “It’s so multifaceted that I’m just not sure yet,” he said.

Another attendee, a Lancaster County dairy farmer who asked to remain anonymous, said he came to the field day to learn as much as he could and to hopefully find a processor for the several acres of CBD hemp he’s growing.

Can a few acres of hemp offset the milk prices and help a dairy farm survive?