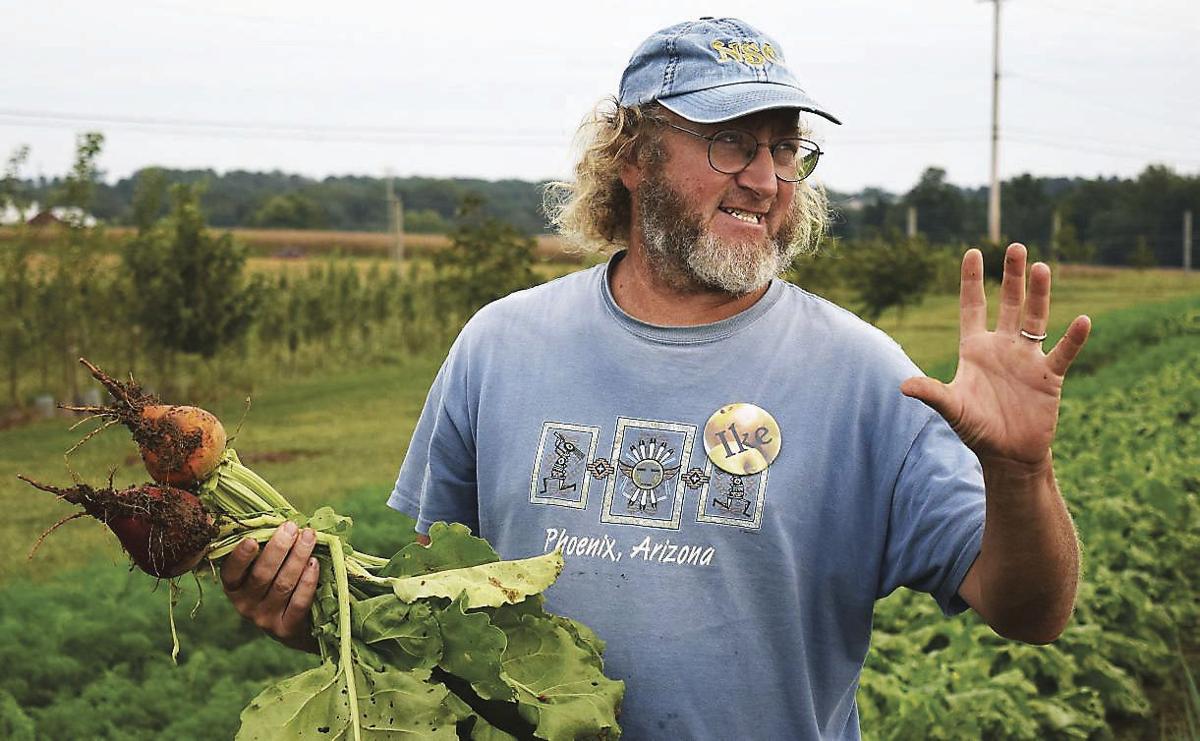 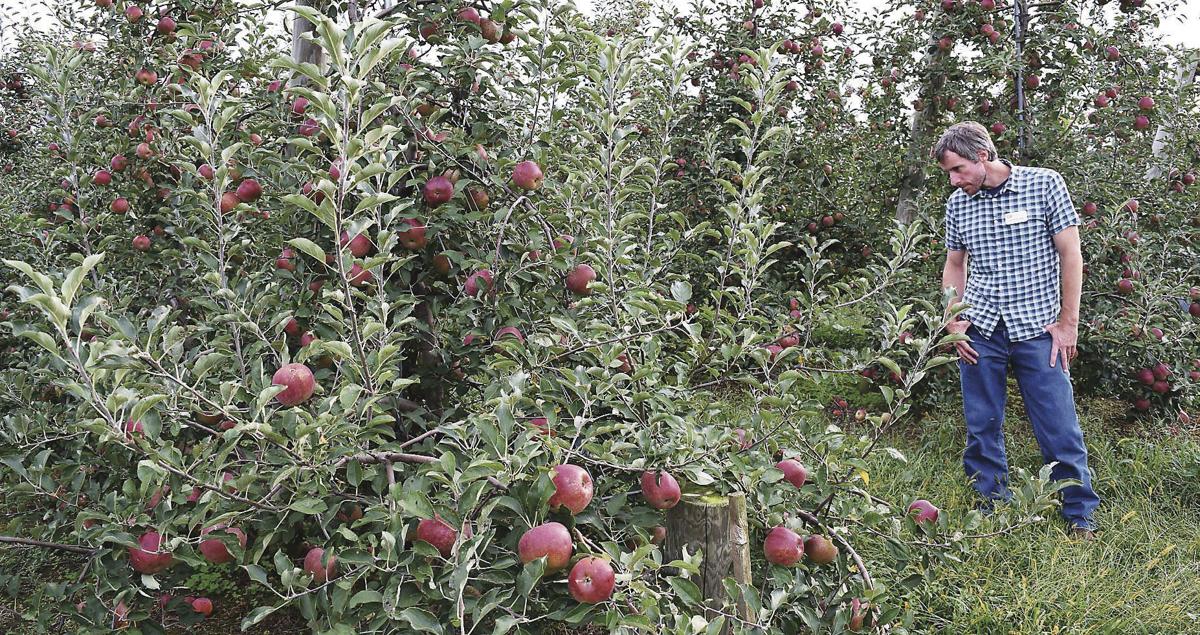 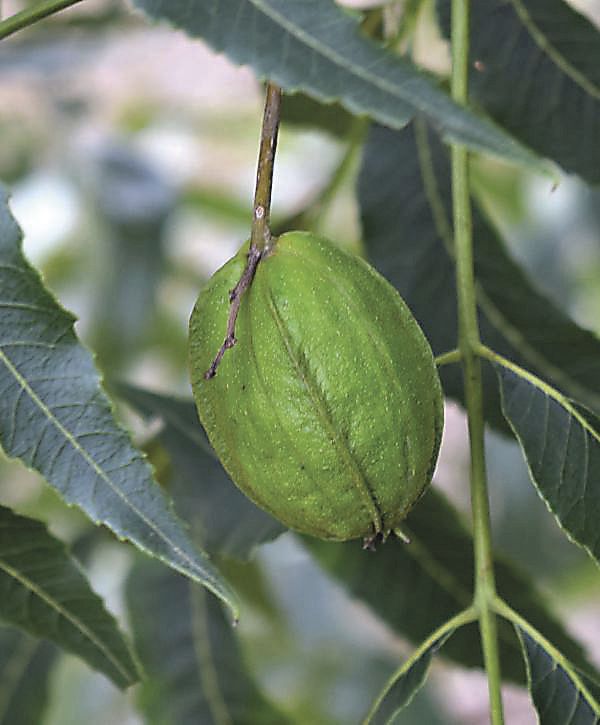 Ike Kerschner got a single pecan this year. 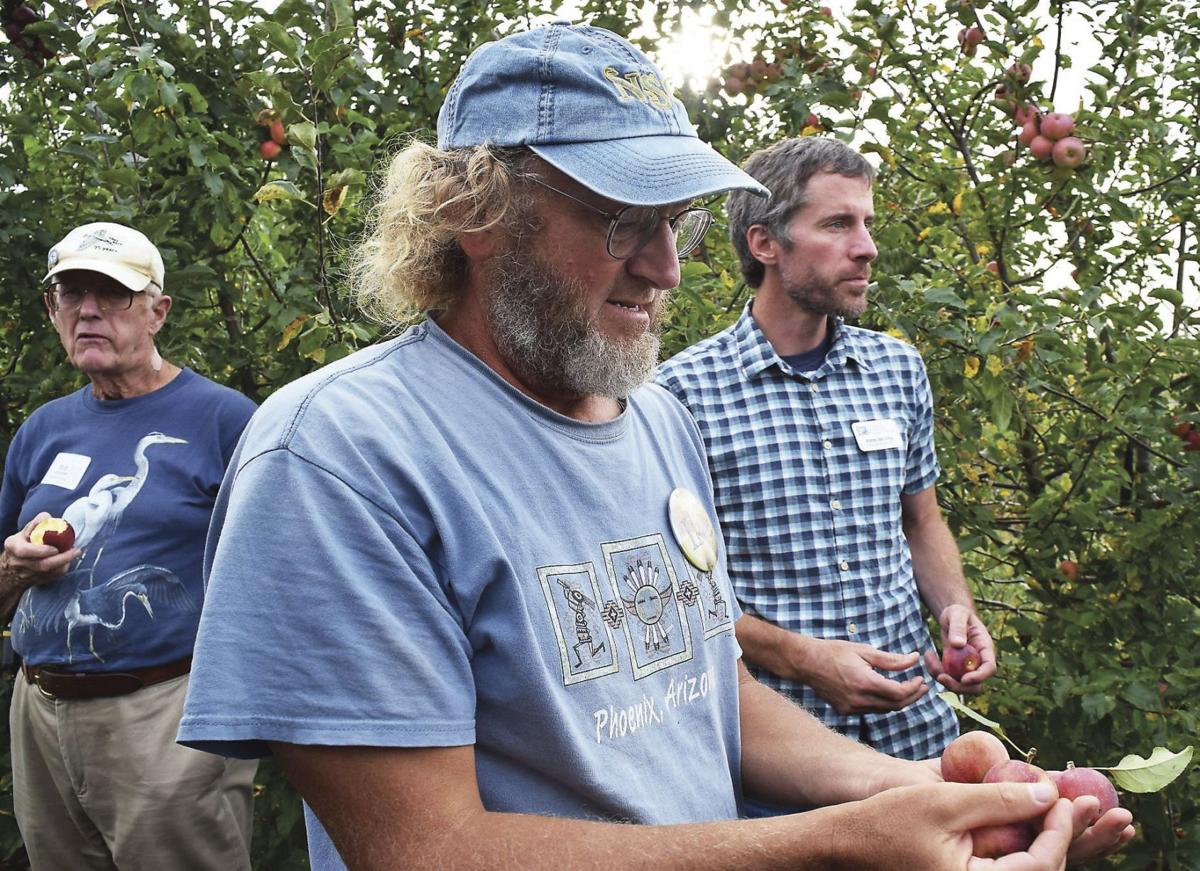 Ike Kerschner shows off some apples he grew for breeding. Some varieties taste good, and others are horrible, he said.

Ike Kerschner got a single pecan this year.

Ike Kerschner shows off some apples he grew for breeding. Some varieties taste good, and others are horrible, he said.

COCHRANVILLE, Pa. — You can find a Gala or Fuji apple at any grocery store.

But a Monolith, Ludicrisp or the still-unnamed apple variety that tastes like black cherry soda? You’ll find those only at North Star Orchard.

The homegrown varieties, the chance to taste something you won’t find anywhere else, are a big part of the direct-marketing orchard’s appeal.

“I have a note taped in (a farm notebook) that says, ‘Dazzle me,’ ” said Ike Kerschner, who runs the farm with his wife, Lisa.

The couple led a tour of the farm on Tuesday for members of the Pennsylvania Association for Sustainable Agriculture.

In one of the experimental blocks, Kerschner pulled apples from two different trees. One tree was bearing tasty fruit; the other had not impressed him, he said.

The apples were small, but Kerschner was not too concerned at this experimental stage. The farm has a market for apples of different sizes, he said.

He is a stickler about taste.

“When you have 3,000 apples to sift through, you’ve got to have high standards,” Kerschner said.

If the fruit tastes bad, the tree gets a black tag, then the chain saw. “The stumps don’t regrow too much because there’s so much competition,” he said.

Other times, things do not go according to plan.

The trees Kerschner brings in for his heirloom collection are sometimes infected with viruses. Commercial nurseries must use certified virus-free wood, but that’s often not possible with heirloom trees, he said.

These old varieties may produce only a few bushels a year, but they help customers broaden their tastes, Kerschner said. These apples are often used at the farm’s apple tastings.

The varieties that the Kerschners sell through farmers markets and an 800-member fruit community-supported agriculture business include some familiar varieties, like Rome and the wildly productive GoldRush.

The Kerschners don’t grow the popular Honeycrisp because they dislike its taste, though “we truly love” Honeycrisp’s parent Keepsake, Kerschner said.

The Kerschners have bowed somewhat to popular sentiment with Sugar Snap, their name for a former project of Cornell University’s apple breeding program.

The couple are not particularly fond of the flavor, but “it’s got the crunch and the juice and the applely flavor,” the quintessence of the apple taste, Lisa Kerschner said. Customers love it.

The breeding apples start out as seeds, which are removed from the fruit, cleaned and stored dry until January. Then Ike Kerschner cleans them with sodium hypochlorite, a chemical also used to shock swimming pools.

The cleaned seeds get refrigerated in baggies with potting soil. Eventually, they are sown in flats in the greenhouse, he said.

The seedlings generally take about four years to produce fruit. “All breeders are working to reduce that juvenile period,” Ike Kerschner said.

To encourage disease resistance, Kerschner does not spray his breeding trees. He has found he has to live with Marssonina blotch, a disease that does not show up when the orchard is sprayed.

The Kerschners experiment with other kinds of tree fruit.

The Bowden nectarine, a relatively new variety from the University of Arkansas, has a nonmelting flesh, meaning it does not soften as it ripens.

Despite the fruit’s amazing taste, “it’s something you have to explain to everybody,” Ike Kerschner said.

He said he has tried most of the high quality European plum varieties. He weeds out the ones that have problems with cracking and bacterial spot.

The orchard can get blustery because it is one of the highest spots in the area. “Bacterial spot and fire blight both like wind,” Kerschner said.

Some of the peaches have an unusual characteristic beyond their variety: They are bolted together.

One winter, the then-young block was hit by a 4-foot snow drift. As the snow melted, ice formed, and “it literally split the trees down the middle,” Lisa Kerschner said.

The Kerschners bolted the trees back together as best they could. Amazingly, it worked. The trees are still flagged to indicate which ones have the hidden hardware, Ike Kerschner said.

The Kerschners let their peach trees grow tall to increase their per-acre yield. With a hydraulic lift, getting to the fruit is not an issue, he said.

The Kerschners have expanded their experimentation to vegetables. North Star Orchard has its own beet, carrot, powdery mildew-resistant butternut squash and striped eggplant lines.

Vegetables give workers something to do between thinning and harvesting, Ike Kerschner said.

When the seed beet plot is harvested, he carefully washes and dries off the ones he likes. The greens are mostly cut off because they tend to rot, but the growth point must be preserved, he said.

The beets are stored over the winter in plastic bags in a cold refrigerator.

The taproot will not re-establish when the beet is replanted, so Kerschner cuts it off in the spring. That cut also gives a peek at the inside coloration of the beet, he said.

Kerschner has developed lines that produce good beet greens and are resistant to foliar diseases, but he’s still experimenting.

“This one is like a fat carrot shape, and we’d rather have a globe,” he said, pulling an orange beet out of the ground.

Ideally, the beets are harvested before they get beyond 6 inches in diameter. “People are afraid of a big beet,” Lisa Kerschner said.

The Kerschners have also experimented with nuts, which require relatively little work but take years to start producing at commercial levels. “We have one pecan nut this year,” Ike Kerschner said.

He selected northern and far northern varieties that were scab resistant. “The far northern types are really backyard types” because the nuts are small, he said.

Chester County’s climate can accommodate varieties that need at most 175-180 days to nut filling, the measure of pecan maturity, he said.

The pecan trees could eventually grow 70-100 feet tall. Kerschner hopes to eventually harvest a ton or more of pecans in shell from the trees.

The farm’s mix of hard-to-find produce will soon be sold directly from the farm. A farm store is set to open in 2017, Lisa Kerschner said.