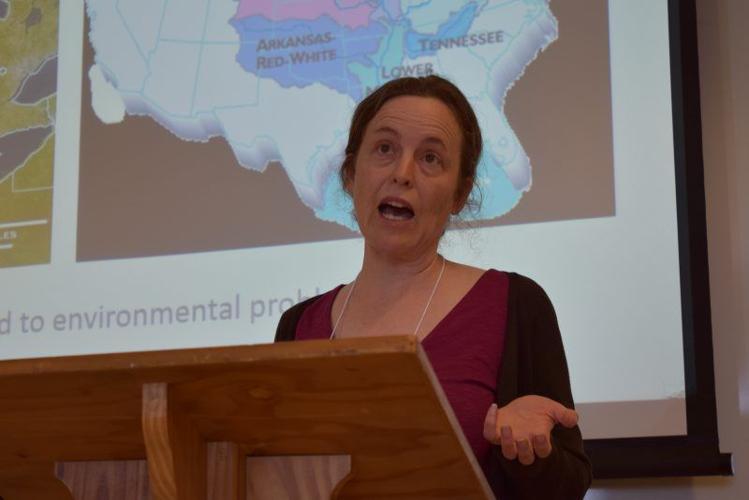 Caroline Brock, a rural sociologist at the University of Missouri, speaks about how the Amish approach conservation projects. 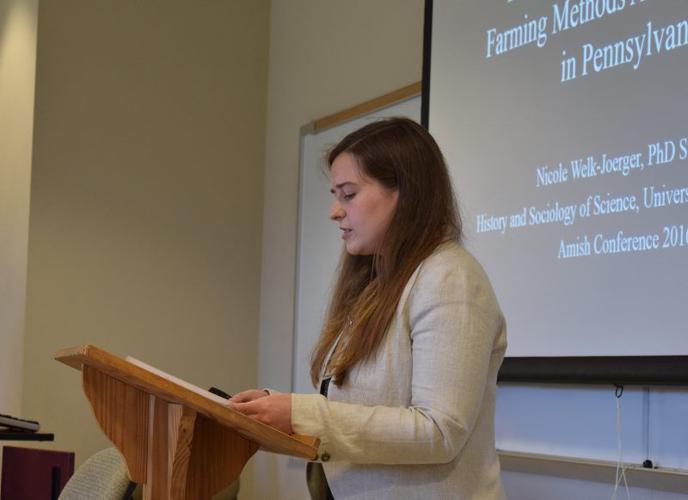 Nicole Welk-Joerger, a doctoral student in the history and sociology of science program at the University of Pennsylvania, speaks about how Amish people approach science and religion.

Caroline Brock, a rural sociologist at the University of Missouri, speaks about how the Amish approach conservation projects.

Nicole Welk-Joerger, a doctoral student in the history and sociology of science program at the University of Pennsylvania, speaks about how Amish people approach science and religion.

ELIZABETHTOWN, Pa. — The Amish care about protecting the land they farm, but they are careful about who helps them toward that goal.

For outsiders who want to help the Amish adopt conservation practices, “building relationships is what’s really key,” said Caroline Brock, a rural sociologist at the University of Missouri.

Brock presented a paper at the Amish Conference on June 10 at Elizabethtown College.

Brock’s research included interviews with Extension agents in the Midwest and New York, and a case study of an Amish settlement in Berne, Indiana.

Working with the Amish is a big opportunity for government and Extension agents to reduce nutrient pollution in streams.

“As more and more farmers get out of farming ... we see more Plain farmers sort of taking over some of those places,” Brock said.

The Amish have already adopted a lot of conservation practices, such as crop rotation, on their own. One Extension agent said he felt almost hypocritical telling the Amish what to do, Brock said.

“There’s definitely a creation care ethic that comes from Scripture,” even though the Amish do not express themselves as environmentalists would, she said.

Brock also found that Amish farmers could do more.

In Berne, non-Amish farmers were bigger adopters of conservation practices, except for cover crops, than the Amish were, Brock said.

Farmers can have a lot of animals for the amount of land that they have, creating manure management headaches.

“We see a lot of pastures that are overgrazed,” potentially because the Amish keep horses, she said.

Amish farmers can also be hard to contact and gather for meetings, as they have restrictions on modern technologies such as phones and cars, Brock said.

The Berne Amish were less aware of water quality issues than their English neighbors. Among the Amish, “there was more concern for other issues that the NRCS wasn’t really measuring,” such as pesticide use, Brock said.

Of course, Amish farmers have many of the same challenges — regulations, reluctance to change — as other small and midsize farmers, she said.

Still, NRCS technicians have limited resources and are expected to get results. Technicians may feel their time is better spent on larger, more receptive farmers than on small, cautious farmers, Brock said.

To develop better relationships with Amish farmers, “you can appeal to the commonality with other farmers,” Brock said.

Agents should emphasize that they are not targeting farmers because of their religion, that they are talking with English farmers too, she said.

Agents may also be able to find which groups or individuals are most receptive to working on conservation projects, Brock said.

Some people suggest approaching the bishops first. Others say to start with the young innovators, or a trusted English neighbor or businessman. Some groups had a liaison they wanted to work through, Brock said.

Some conservation practices may need to be adapted for the Amish lifestyle. No-till equipment may need to be retrofitted for horses, and solar-powered electric options skipped for fencing projects, Brock said.

Most important, the agent should be a first name, not just a representative of the government.

Agents can just go to a produce auction and spend time getting to know the farmers. “You’re going to spend more time most likely,” but Amish farmers’ trust can be earned, Brock said.

Having the right people in the field is important, said Dennis Eby, who works with Plain farmers at the Lancaster County Conservation District.

Having a familiar last name and being an Anabaptist — the category of Protestants that includes the Amish, Mennonite and Brethren — makes it easier to develop a rapport, Eby said.

Though Amish farmers are wary of the world’s influence, “many of them are very interested in technology,” said Jeff Graybill, a Penn State Extension educator who moderated the presentations.

In Lancaster County, many Amish farmers are OK with things that increase efficiency so long as they do not divide the family or community.

Technologies must fit within the guidelines set by the bishop, Graybill said.

Sometimes, government conservation money needs to be funneled through another entity, he said.

Genetically modified organisms, or GMOs, are a topic of extensive, serious discussion among the Amish, said Edsel Burdge Jr., a researcher at Elizabethtown College’s Young Center for Anabaptist and Pietist Studies.

Nicole Welk-Joerger, a doctoral student at the University of Pennsylvania, offered one story of a successful interaction between an English speaker and the Amish.

Welk-Joerger, who rode with a feed company nutritionist for three months in 2013 as part of a research project, watched as an English veterinarian dissected a dead Jersey bull calf before a mostly Amish audience.

When he got to the kidney, the veterinarian said he loved that organ because it proved the creativity and diligence of God.

Cattle are one of the few species to have multichambered kidneys. If the animal eats something toxic, one section of the kidney takes on the damage and dies off, allowing the rest of the animal to survive, Welk-Joerger said.

The veterinarian said that God knew his farmers would make mistakes in feeding their cattle. “Farmers nodded in agreement,” Welk-Joerger said.

Veterinarians were not always popular because they tended to speak in jargon. This vet, however, knew how to speak in farmer-friendly language while affirming the farmers’ work as godly, Welk-Joerger said.

Amish farmers think about science and the environment in ways that can be difficult for outsiders to understand, Welk-Joerger said.

If English people take the time to listen, though, they can find ways to collaborate on conservation projects.