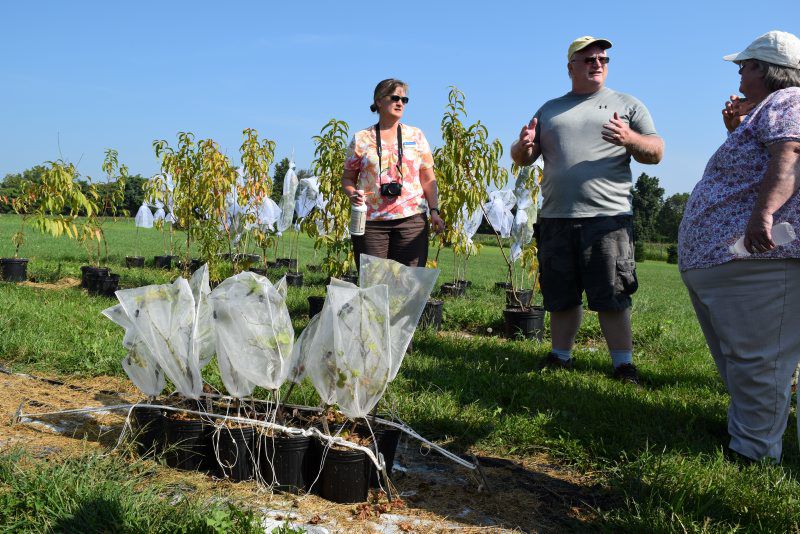 David Biddinger, a Penn State Extension entomologist, describes a study of spotted lanternflies on grapes and peaches. The young grape plants are bagged so that the lanternflies cannot escape. 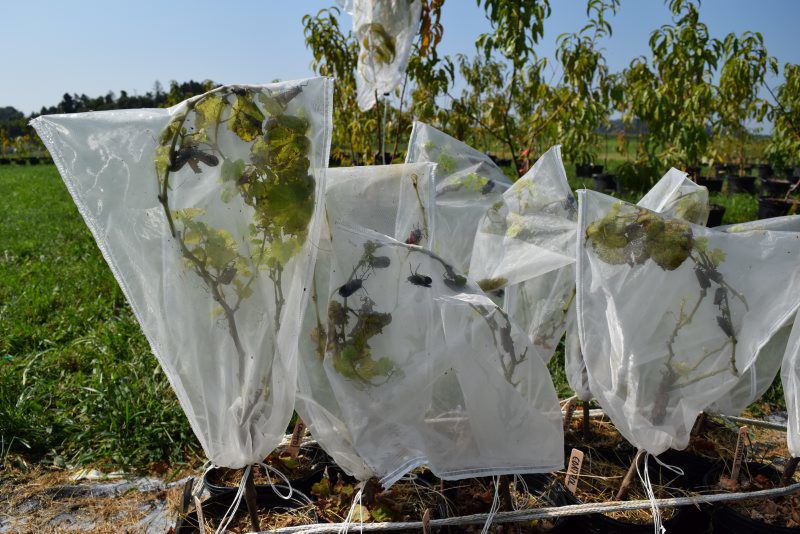 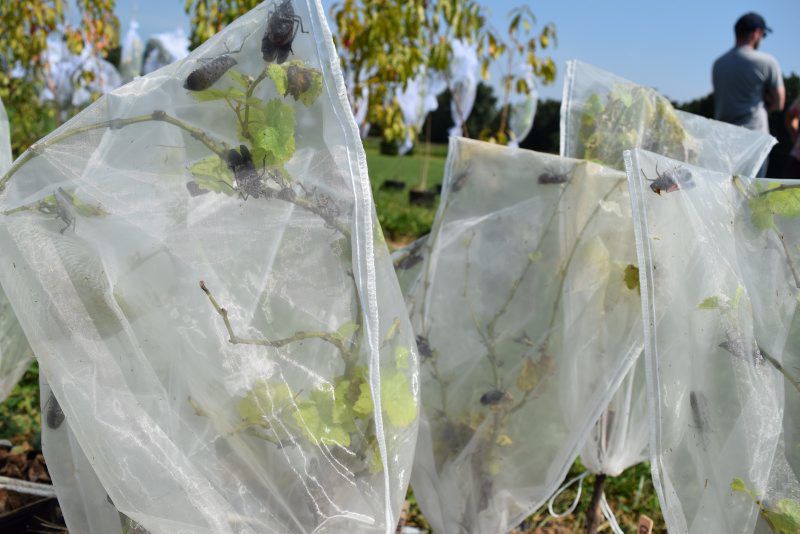 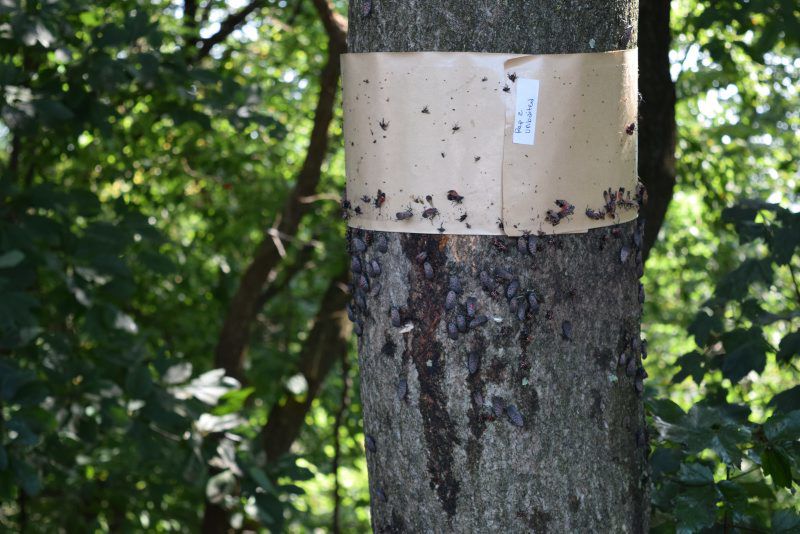 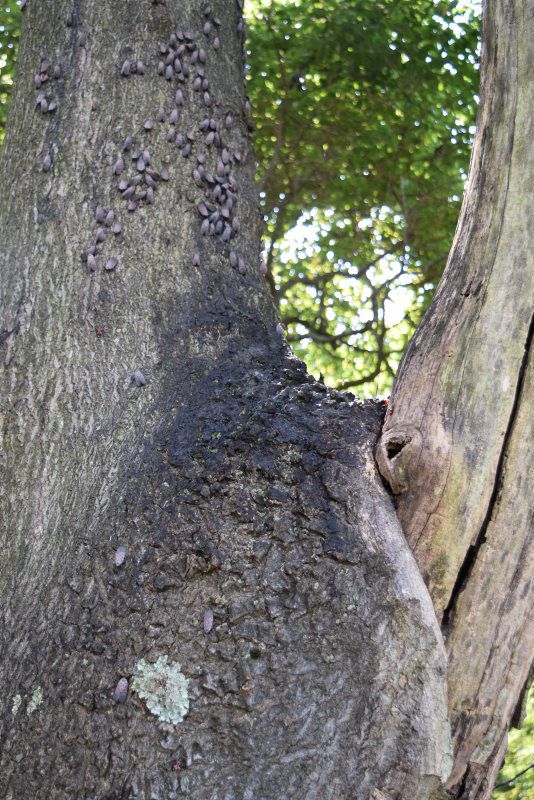 David Biddinger, a Penn State Extension entomologist, describes a study of spotted lanternflies on grapes and peaches. The young grape plants are bagged so that the lanternflies cannot escape.

DOUGLASSVILLE, Pa. — Strictly speaking, one spotted lanternfly in Pennsylvania is one lanternfly too many.

The invasive species from Asia has brutalized vineyards and could threaten hardwoods, tree fruit and other crops.

But if state leaders hope to defeat the pest, they need to know how many lanternflies must be present to be worth the cost of an insecticide spray.

“Every bug that walks across a plant’s not a pest. They have to be in density sufficient enough to do damage,” said Richard Roush, dean of Penn State’s College of Agricultural Sciences.

This quest for an economic threshold explains the row of 80 grape plants enclosed in mesh boxes at Manatawny Creek Winery.

Each plant is supplied with a set number of lanternflies, said Julie Urban, one of the Penn State researchers who will measure the damage the insects make.

Urban led a tour on Tuesday of lanternfly research projects around Berks County, which is ground zero for the lanternfly’s invasion.

The 3-year-old vines in the winery study came from the university’s grape research station on Lake Erie.

The project will take several years to build up the data, so one of the researchers asked vineyard owner Darv Levengood if the university could use some of his production vines to get data this year.

“We kind of expected a slap-in-the-face and march-out-the-door kind of thing, but he offered to let us use some of his Chancellor vines,” said Heather Leach, Penn State’s spotted lanternfly Extension associate.

In this study, there is just one treatment and a control. The treatment is 50 lanternflies per vine in a mesh-covered vineyard panel between two posts.

The challenge has been keeping up with Levengood’s schedule. Every time he sprays, the team has to collect about 1,000 replacement lanternflies and put them into the mesh, Leach said.

The study should provide good information about the damage caused by the lanternflies’ sticky waste, called honeydew, and the sooty mold that grows readily on it.

Lanternflies drink juices from the vine itself, not from the fruit, but the honeydew and mold can coat the leaves and fruit, reducing harvest quality and yield.

Leach and company will also be making weekly visits to a handful of vineyards to count the number of lanternflies and the damage they’re causing.

In South Korea, where the lanternfly is also an introduced pest, sooty mold has been the primary cause of damage in grapes.

That hasn’t held true in Pennsylvania.

One grower sprayed as often as needed, but hordes of lanternflies kept moving in from the woods. The frequent spraying was expensive.

Dead vines are a major blow to a vineyard owner because it takes three years for a new planting to start producing.

“If they’re just going to get hit by lanternfly again, why should I pay for the effort and the help to pull them out and put them back in?” Urban said.

One factor might reduce the cost of lanternfly control this year: There’s been lots of rain, so grape growers have had to use fungicides frequently.

“It’s pretty cheap to then throw in an insecticide in the tank and also spray that,” Leach said.

The economic threshold studies will give growers more clarity about when to spray, but it will also put the lanternfly team in a better position to get research funding.

All of the government funding so far has come in one-year grants.

“When you’re committing to training a Ph.D. student for five years, it’s really hard to get the best and the brightest to come and work on your team when you’re year to year,” Urban said.

Penn State entomologists David Biddinger and Greg Krawczyk have been able to get spotted lanternfly emergency registrations for a number of insecticides, but Biddinger said pounding the pests with chemicals isn’t the best long-term strategy.

The best-case scenario is that native predators will develop a taste for the lanternflies. That’s happened with other exotic pests, such as the brown marmorated stink bug.

USDA is also studying the possibility of importing lanternfly predators from Asia, though this is a lengthy process, Biddinger said.

In another research project, Penn State entomologist Tom Baker is studying lanternfly flight patterns, which could help predict where the pests might move next.

Korean research papers describe lanternflies as poor fliers, more like gliders, but Pennsylvania’s population is proving to be a bit more robust.

Some migratory insects, such as locusts and monarch butterflies, ride the wind.

Migrating lanternflies, however, take off into the wind, which gives them more control over their movements, Baker said.

Lanternflies only fly for 160 to 260 feet at a time. Then they crawl up the next tree or high object — silo, telephone pole — and take off again.

“They want to stay close to the ground,” Baker said.

Last year, swarms of lanternflies moved across the countryside until they settled down to feed and mate.

The big question now, Baker said, is why they decided to stop in the places they did.

Quarantine restrictions have been put in place for 13 Pennsylvania counties since 2014, and the insect has been found in several neighboring states.

Dana Rhodes, the state plant regulatory official at the Department of Agriculture, still believes the lanternfly fight is winnable, though it was never going to be easy.