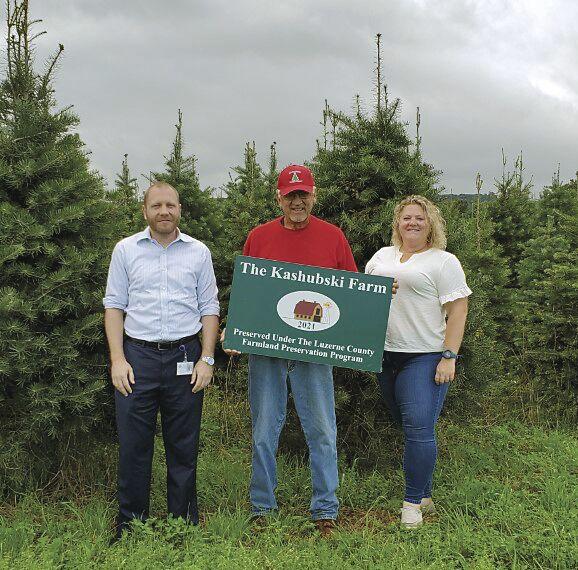 From the left are Jennifer Lauri, Luzerne Conservation District; Joe Gans; Pat Gans; and Matthew Jones, Luzerne County Planning Commission. The Gans have enrolled several hundred acres in the Luzerne County Farmland Preservation Program, the most recent being a 134-acre parcel in September.

Shortly after enrolling his farm in the Luzerne County Farmland Preservation Program, Robert Kashubski had a message for anyone considering adding their farm to the waiting list: Do it now.

Kashubski, who preserved 76 acres of his Butler Township farm, said increased housing development in the southern half of Luzerne County is threatening to gobble up farmland.

The best solution, he said, is to preserve the fields before the landscape of the area is changed forever.

“The development is everywhere, and it’s expanding. There’s not enough acreage being preserved,” Kashubski said. “If you’re thinking about preserving your farm, get it on the list now while the program has money.”

Kashubski’s farm was one of two preserved by the county program in September. The other farm, owned by Pat and Joe Gans in Black Creek Township, totaled 134 acres. It was the second parcel the Ganses have preserved; the first, with 140 acres, was protected in 2011.

Pat Gans agreed that development pressure was a major factor in the decision to preserve her family’s land. She said a developer expressed interest in buying their property, and even though the farm spent several years on the preservation’s waiting list, it was worth the wait.

“The economy in Hazleton is putting people into the farmlands because there’s no housing in the city,” Pat said. “We rent our land to another farmer, but we have a home, shooting preserve and we hunt here. Development would crush all of that.”

The preservation program compensates farm owners for the purchase of the conservation easement to the property, limiting uses of the land to agriculture and related activities. Funding for the purchase of easements is provided by the Pennsylvania Agricultural Conservation Easement Purchase Program and Luzerne County’s Clean and Green Program.

Since the program’s inception in 2000, 35 farms in the county have been preserved, totaling 3,343 acres.

According to Jennifer Lauri, agricultural program administrator for the Luzerne Conservation District, there are 21 farms on the county waiting list, and two are expected to be preserved in 2022.

The average price paid to farmers under the county program is $3,400 per acre, and applications for the 2022 round are being accepted until Feb. 1 of next year, she added.

Most of the farms preserved under the program are in the southern half of Luzerne County, and Lauri said that’s by design. While farms are ranked according to soil types and road frontage, development pressure and proximity to other preserved properties are also key factors.

“It’s really important to preserve farms close to each other. The program likes to focus on clustering of preserved areas,” she said. “There’s a lot of development pressure in the lower part of the county, and that’s one reason why so many of the preserved farms are there.”

While the program preserves land, it also protects history. The Ganses began purchasing farmland in 1976 in an effort to rejoin the properties that used to comprise a large farm in the area.

“The original farm was owned by a different family, and it was around 700 acres. They cut ice here in the winter, and the railroad transported it to Berwick and Bloomsburg,” Pat Gans said. “We almost have the whole farm back together.”

Kashubski’s farm was purchased by his family in 1950 and had previously been a dairy. Since 1950 it has been used to grow produce and Christmas trees, and Kashubski said he won’t make any changes to the operation.

“The history part of it is really important,” he said. “Once the land is divided into acre lots, no one remembers the history of the farm. It gives me peace of mind knowing this will always be here.”

Watch: Panel discusses the importance of farmland preservation and the threat of suburban development [video]

Declining levels of local-government funding and intruding suburban development are threatening long-term progress on farmland preservation, according to a new report from the Lancaster Farmland Trust.  A panel of local of five community leaders and members met Thursday at LNP Media Group to discuss the importance of farmland preservation in Lancaster County. Watch the livestream, below.

For 40 years, Lancaster County has been a trailblazer in farmland preservation, but a new report from the Lancaster Farmland Trust released Wednesday says declining levels of local-government funding and encroaching suburban development are threatening long-term progress.