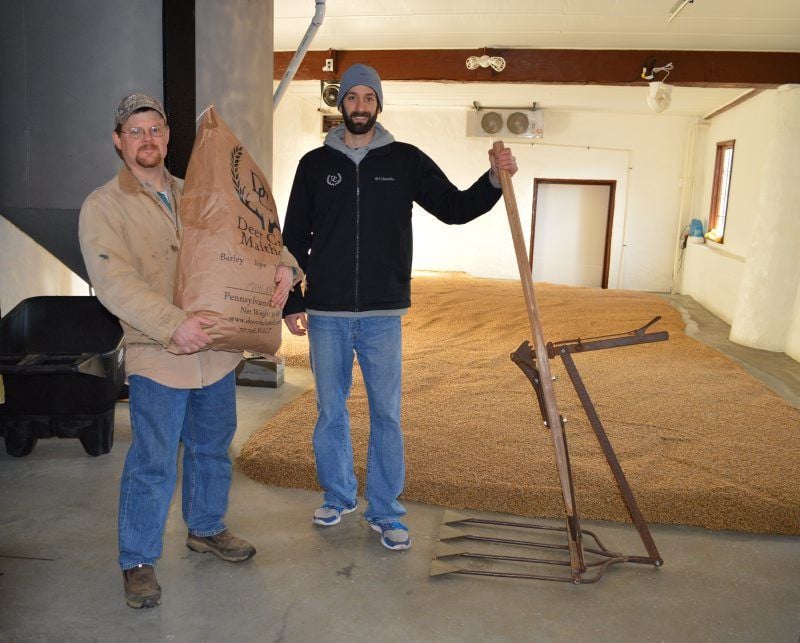 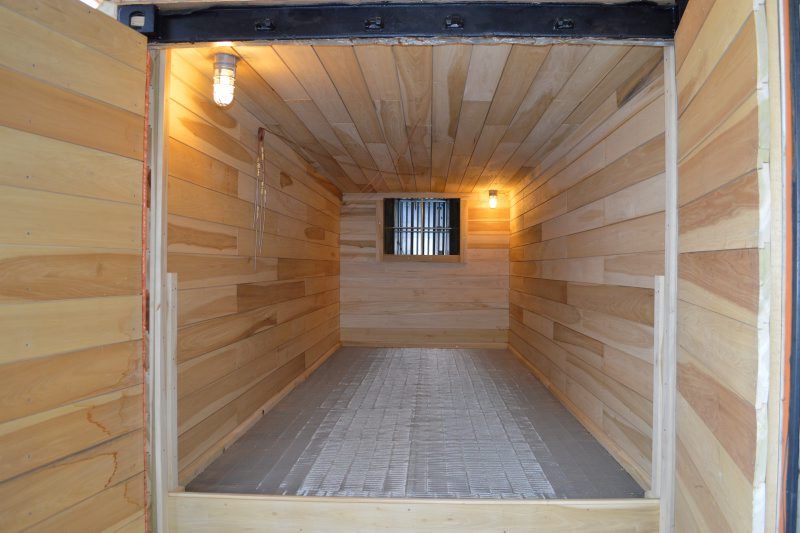 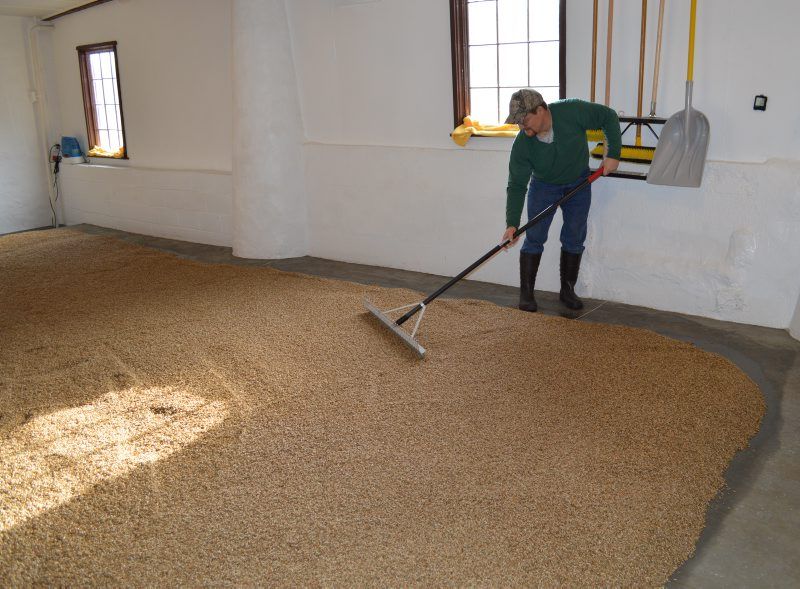 “Malting’s all about germination on a large scale,” said Mark Brault, a co-owner of Deer Creek Malthouse, which started full-scale production in October.

Malting involves sprouting grain to develop enzymes and convert starches into simple sugars that yeast can feed on during fermentation.

Along with hops, malted grains — especially barley — are a key ingredient in beer.

Founded in 2012, Deer Creek is one of the first malt houses to open in Pennsylvania since Prohibition.

Malting operations were hit hard by the ban on alcohol in the 1920s, but Scott Welsh, who handles the agricultural side of Deer Creek’s malting business, also points to agronomic reasons for malting’s long disappearance from the state.

Small grain production has shifted to dry areas of the Great Plains where the growing season is short and corn does not grow well. “They didn’t have a lot of other crop options,” Welsh said.

When craft beer exploded, local brewers “got malt wherever they could,” which generally meant the Western states, Canada or Germany, Brault said.

Brault, Welsh and Josh Oliver, a home brewer and chemist, saw an opportunity to provide brewers with malt grown closer to home — to re-launch a “new old industry,” as Brault describes it.

The three renovated a 150-year-old bank barn, largely by their own labor, to serve as the malt house. Because equipment specific to small-scale malting is not really available, Welsh ended up designing most of it himself.

The company is running trials for 78 varieties, growing crops on leased land and working with Penn State, the Craft Maltsters Guild and the John Innes Centre in England. They are looking at barley, rye, wheat and sorghum, Brault said.

Barley, the most important malting grain, grows well in southeastern Pennsylvania, and farmers are familiar with growing it for livestock feed. Welsh said he is looking for varieties with good yield, winter hardiness and disease resistance.

Most malting barleys are spring varieties and are bred for the Midwest, but those suitable for Pennsylvania are winter varieties.

That allows farmers, at least in the southeastern part of the state, to double-crop with soybeans, Welsh said.

All of Deer Creek’s grain from last year and this year was grown within 50 miles of the malt house, Brault said.

Deer Creek pays a premium for quality malting barley. So far, Welsh said he has been pleased with the grain he’s gotten and is looking for more grain growers.

Deer Creek collects all of its grain for the year at harvest. The farmers air-dry the grain, and the company tests it for quality before receiving it, Welsh said.

The grain is stored in a 4,000-bushel grain bin and super sacks on the farm.

When the grain is ready to be malted, it is run through a grain cleaner on the covered dock at the barn. The machine sits outside to prevent the buildup of potentially explosive dust, Brault said.

Next, the grain is conveyed to the second floor of the barn, where it is dropped into a steep tank to be rehydrated to a moisture level in the 40s, a process that takes about a day and a half.

While it is steeping, the grain starts to respire, converting oxygen to carbon dioxide. To keep the grain from suffocating, air is bubbled through the tank, Brault said.

Then the wet grain is spread on the concrete malting floor to sprout. The grain is turned every four to eight hours with a shovel or rake. “You want them all doing the same thing at the same time,” Brault said.

The malting floor is roughly 40 by 20 feet, and each batch weighs 1 to 2 tons. Depending on the type of beer, a load of malt could supply 15-30 barrels of beers, Brault said.

No water is added when the grain is on the malting floor. “We just keep it humid and in the 50s,” Welsh said.

The floor stage is done when the shoot coming out of the grain runs about the whole length of the kernel. “You don’t want them them poking out the end,” Brault said.

The process can’t go on too long, though, or the sprout will eat up the things the brewers want, he said.

The sprouted grain is moved to the kiln, a shipping container fitted with a mesh floor and walls of Pennsylvania hardwood.

The kilning process, in which air is forced under the grain, is highly technical. “We don’t have any fancy bells and whistles,” so someone has to hang out in the adjacent room for essentially the entire kilning process, around 20 hours, Brault said.

After the kilning, the grain goes through a modified corn sheller to remove the now-brittle shoots, and it is run through the grain cleaner again. At that point, the grain is finally ready for bagging and delivery, Brault said.

Malt is considered a raw agricultural commodity, so the regulations for the malt house are different from those for ready-to-eat products, Brault said.

Deer Creek is regulated by both local and state entities. Pennsylvania Department of Agriculture, or PDA, inspectors gave the maltsters ideas for their renovations to help ensure food safety, Brault said.

“PDA was good to work with,” Welsh agreed.

Local brewers have already debuted a few beers that use Deer Creek malts. Depending on how long the beer must be aged, “it can take a while” to get a new brew to market, Brault said.

Some brewers are still unsure about using a locally malted grain, but “there’s a lot of excitement” too, Brault said.

While Deer Creek Malthouse is still a rarity, craft malting could soon become its own small industry in Pennsylvania.

There is a “huge, huge demand” for locally malted grains, said Adam Seitz, who plans to start malting commercially in Spring Mills, Centre County, after this year’s barley harvest.

Seitz got a grant through USDA’s Local Food Promotion Program last year to help get his malt house running and to help develop Pennsylvania’s market for locally malted grains.

Seitz said he is excited about Deer Creek’s opening, as building demand for local malts will take a lot of people.

In addition to Deer Creek and his company, Penns Mault, Seitz said he has heard of a small farmhouse brewery in western Pennsylvania that is malting on a small scale, and a few people from Pennsylvania and surrounding states who are looking at malting.

“I think there’ll be some (more malt houses) popping up for sure” in the next few years, he said.