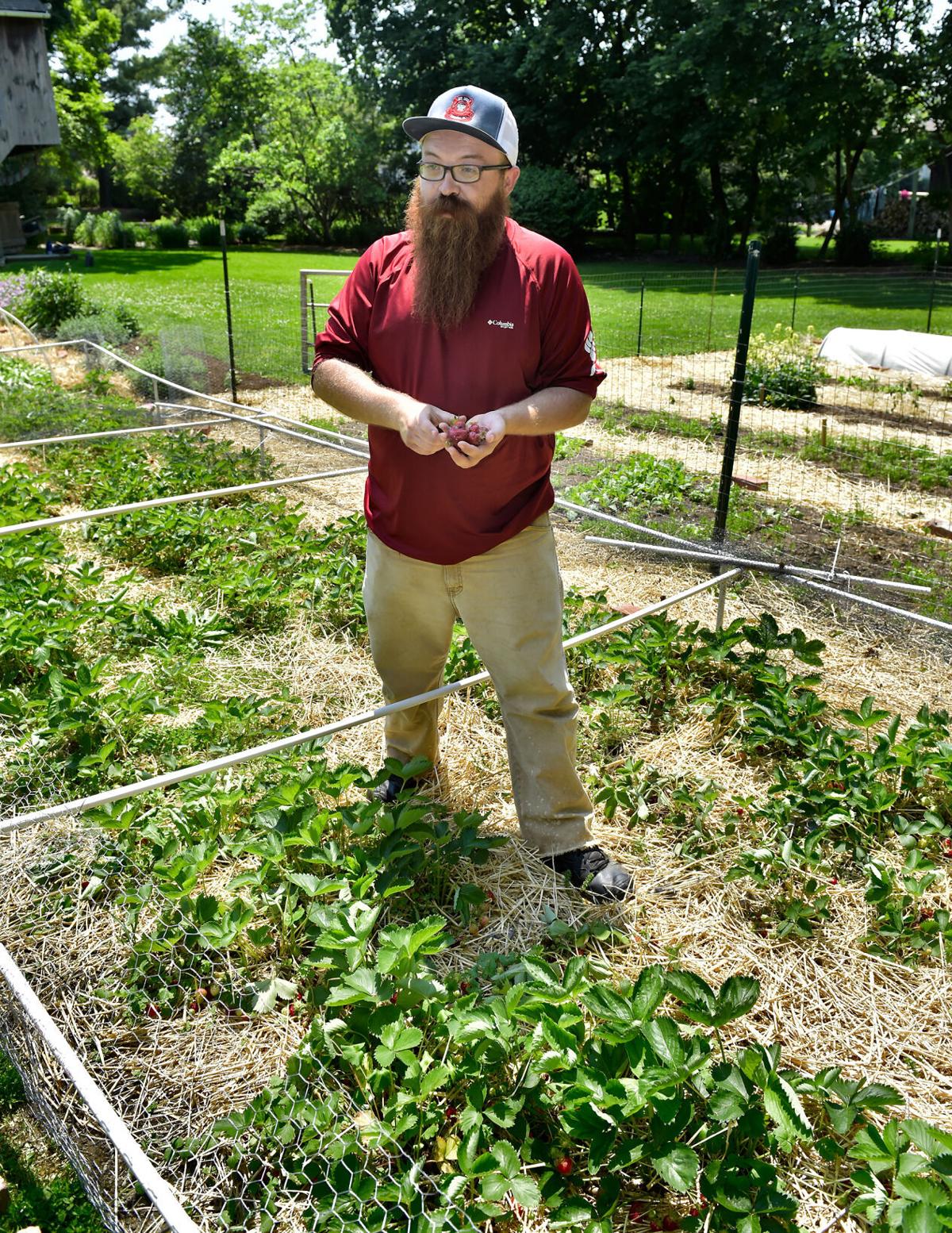 Drew Spitzer of Horse Inn Farm shows off his strawberry bed in Strasburg. 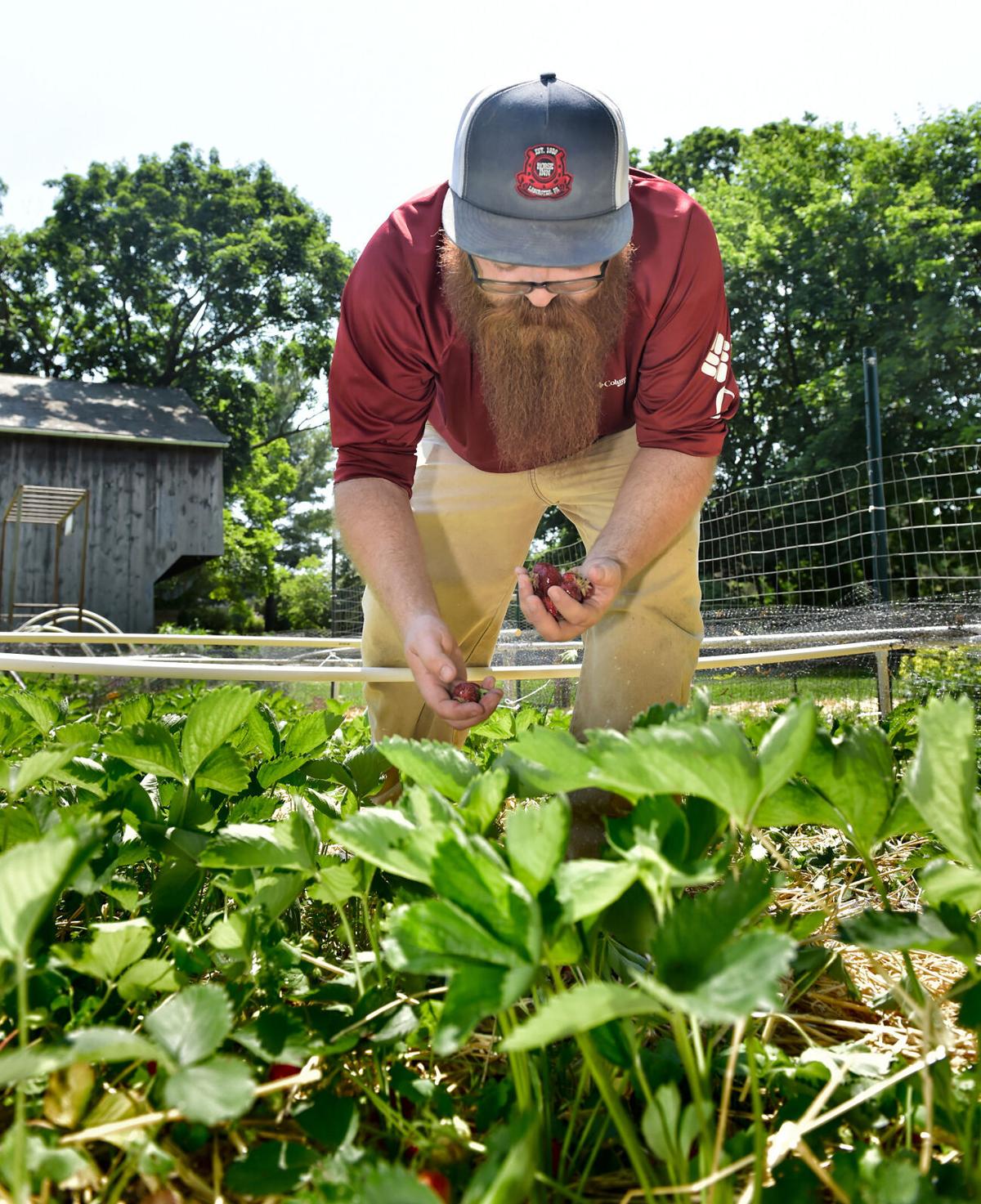 Drew Spitzer of Horse Inn Farm picks a few of his strawberries. 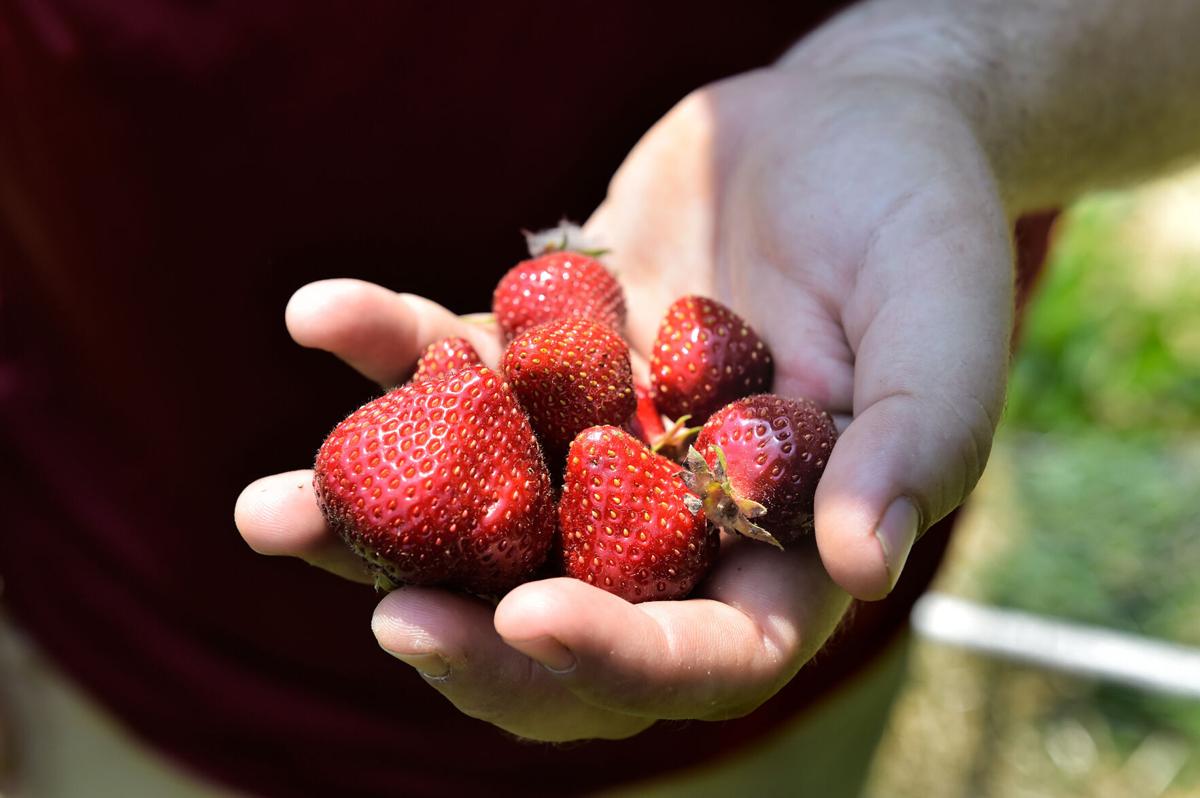 A handful of Drew Spitzer's strawberries. 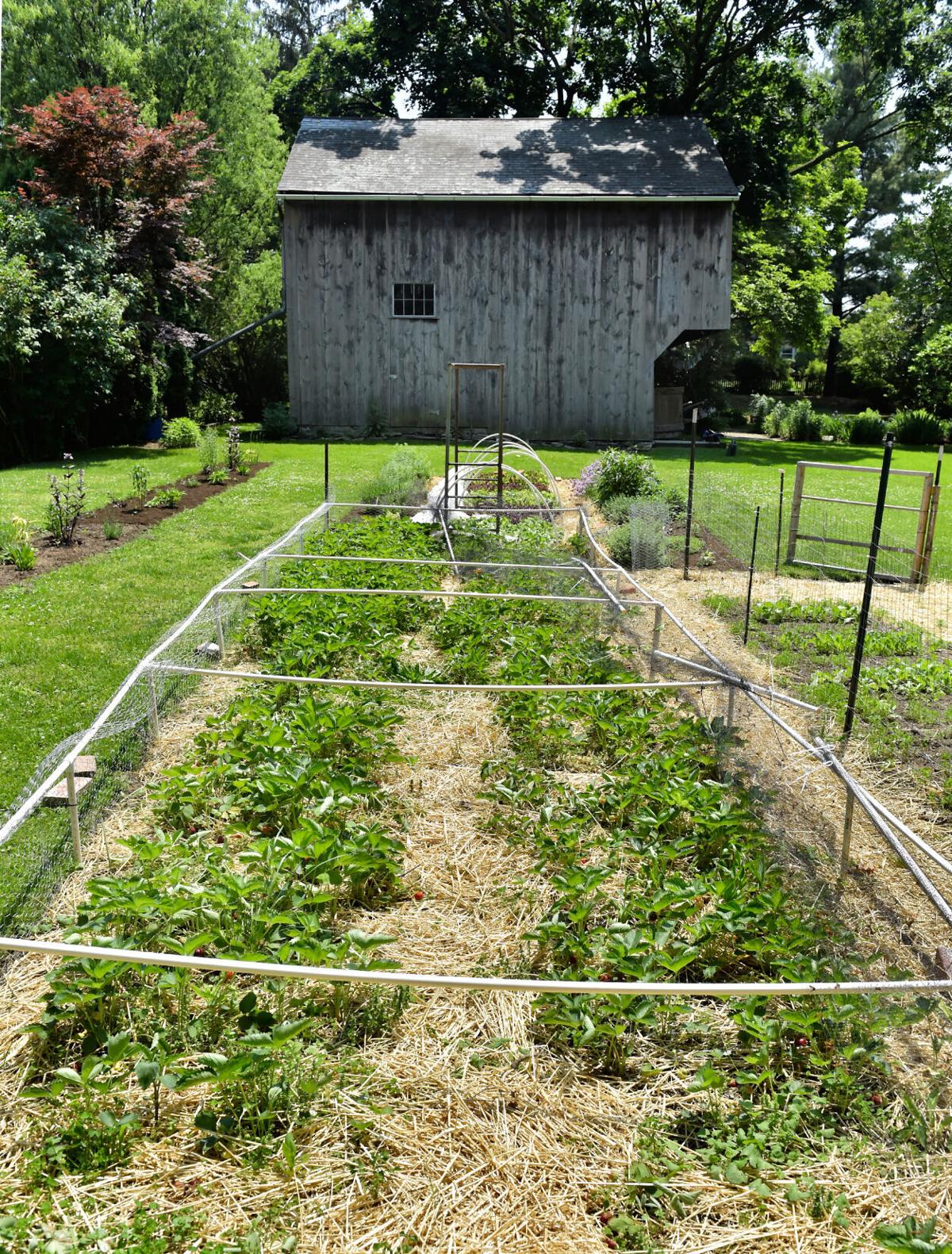 This is the second installment of an ongoing series with a focus on small independent farms and creative use of farmland. We hope it serves as a reminder that the food grown and raised in Lancaster County is both diverse and extraordinary and that the people tending the land have stories worth telling. Join us in saluting our neighbors.

On a recent 90-degree day, Drew Spitzer hands me a sun-kissed strawberry that is almost hot to the touch. It might be the best thing I’ve eaten in a million years. His 8-by-40-feet plot of strawberries is popping with rubied fruit, one of several seasonal crops that he’s growing expressly for Horse Inn. Joining the berries on this quarter-acre parcel in Strasburg are bok choy, head cabbage, cardoons, celtuce, multiple lettuces, snow peas, hakurei turnips and radishes, to name a few.

When asked to describe the Horse Inn Farm, as it’s billed on social media, Spitzer, 34, immediately says that “it’s a family thing.” His big sister is Starla Russell, who with her chef-husband, Matt, own the popular Lancaster city restaurant and bar. The land that Spitzer is cultivating belongs to friend-of-the-family and local jazz musician Tom Pontz, whose band is as “Horse Inn house band” as it gets.

Three years ago, while working at a Lowe’s Garden Center in Tennessee, Spitzer got a call from his sister, who made him a proposition.

“She’s like, ‘How would you feel about moving to Lancaster to grow vegetables for the restaurant?’ ” Spitzer said. “I think I said, ‘Are you joking?’”

For Spitzer, it was a dream come true. Growing up in western Kentucky, his paternal grandmother had “eight mouths to feed and a monster garden” on 2 acres.

“I remember playing in the dirt watching her work,” Spitzer said. “Her passion really rubbed off.”

For Russell, asking her kid brother to grow the restaurant garden was a chance to make up for lost time.

“Drew and I are 10 years apart,” Russell said. “When I was going to college, he was 8 years old. We never had a relationship. I was always his babysitter. We called once or twice a year. I knew he always loved plants, and I thought maybe this garden of Tom’s [Pontz] would give us a chance to finally get to know each other, and for him to have a relationship with his nephew — our son, Kyuss.”

Within a few weeks, Spitzer headed for Lancaster and hit the literal ground running.

“I scrambled to get tomatoes and peppers in the ground,” he said of that first season. “I worked full time during the growing season, then in the winter started working in the restaurant as a prep cook.”

Splitting his time between kitchen and garden, Spitzer says, has helped him better understand how the cooks use his produce, what they need and how to plan for subsequent seasons.

“Being in the kitchen gives me insight on how much [produce] they actually go through,” Spitzer said. “I love to get to see what we’re doing with what we’re growing.”

That kind of insight inspired Spitzer this year to supplement the Strasburg parcel with four leased plots at Lancaster County Park devoted to heirloom tomatoes, chile peppers and tomatillos.

“Matt says we can never have too many tomatoes,” Spitzer said of his brother-in-law. To meet the kitchen’s needs, Spitzer has about 100 tomato plants in the ground, with the goal of 15 pounds per plant, he said.

Spitzer’s strawberries, which amounted to about 170 pints last year, are showing up on the current menu in multiple ways — in an arugula salad with goat cheese from Linden Dale Farm, as a dehydrated sugar topping for ricotta fasnachts and in a milk punch dubbed the “Hal 9000,” a riff from the movie “2001: A Space Odyssey.”

But the riches, say both Spitzer and Russell, go beyond the material.

“I feel spoiled being able to do this,” said Spitzer, as he offered me another gloriously warm strawberry. “Gardening is very meditative and good for your brain. There’s bacteria in the soil that gets into your brain and acts as an antidepressant.”

For Russell, she sees transformation in other ways.

“The relationship is the major thing,” she said. “Since Drew has been up here, we’ve had heart-to-heart talks that have been so meaningful to me. He is truly in his element, and it’s magical to watch. He has a relationship with my son, Kyuss, who loves his Uncle Drew. And on top of all that, we are able to offer produce on the menu that we have grown ourselves, which is really special.”

With more than 5,100 farms throughout the county, Lancaster leads the commonwealth, representing about 10 percent of all PA farms, according to the U.S. Department of Agriculture 2017 Census of Agriculture (and the most recent statistics available). This is the first installment of an ongoing series with a focus on small independent farms and creative use of farmland. We hope it serves as a reminder that the food grown and raised in Lancaster County is both diverse and extraordinary and that the people tending the land have stories worth telling. Join us in saluting our neighbors.

Two years ago this very weekend, my husband and I were in Lancaster city looking for a place to live. In mere weeks, we would be moving here from Seattle. In preparation for our new life and new town, I took to the internet, searching for farm markets and other ways to access seasonal produce. After all, Lancaster was farm country, right?

Wait and see. Play it by ear. That’s the prevailing sentiment from Lancaster County growers about this year’s strawberry harvest, particularly at pick-your-own farms. Last year’s pick-your-own season was called off due to the COVID-19 pandemic, which means there’s a clientele clamoring to make up for lost time and do some berry picking. The increased demand/interest combined with recent temperature swings and minimal rain (and uncertain harvests) have led many growers to take a more reserved approach, begging off final details for as long as possible.

What Lancaster County produce is in season? Strawberries, snow peas and more

The growing season is officially underway and we will be keeping you posted on the latest produce arrivals from local farms and farm stands. Here’s what we’ve spotted in the past week:

Spitzer is busy planning for subsequent seasons, including a bee hive, dedicated garlic and asparagus crops, and if all goes well, selling some of his produce at West End Market, when it reopens in early 2022.