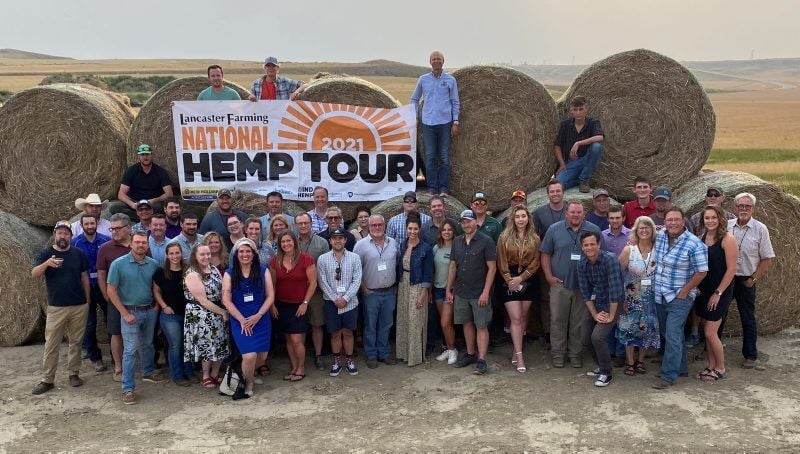 Lancaster Farming's National Hemp Tour was the catalyst for the hemp industry get-together, and the industry people were excited for us to be here. 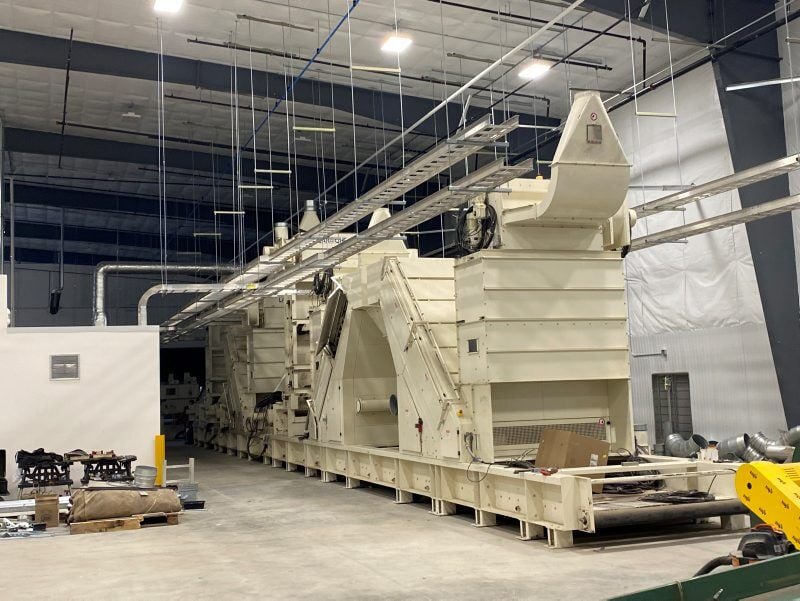 The fiber processing system is currently being installed at the new plant in Fort Benton, Mont. 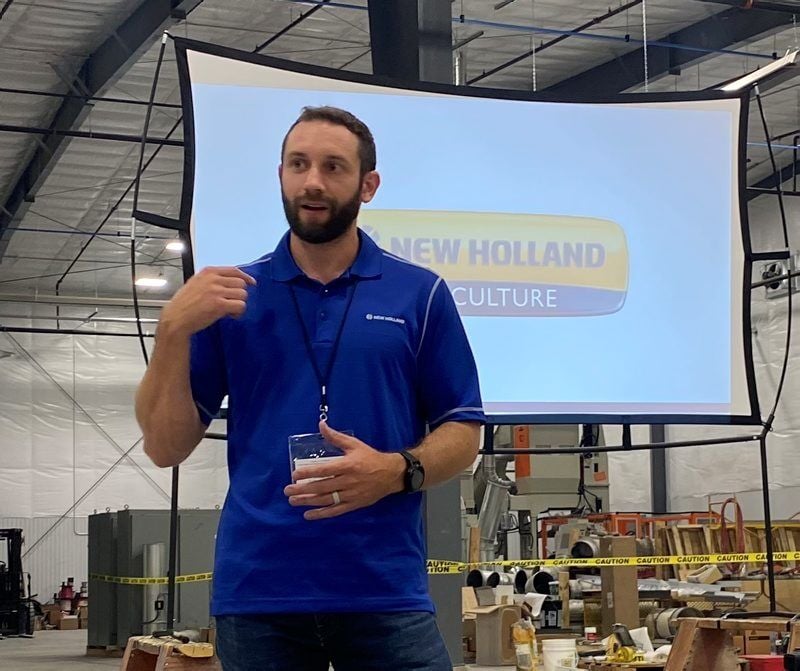 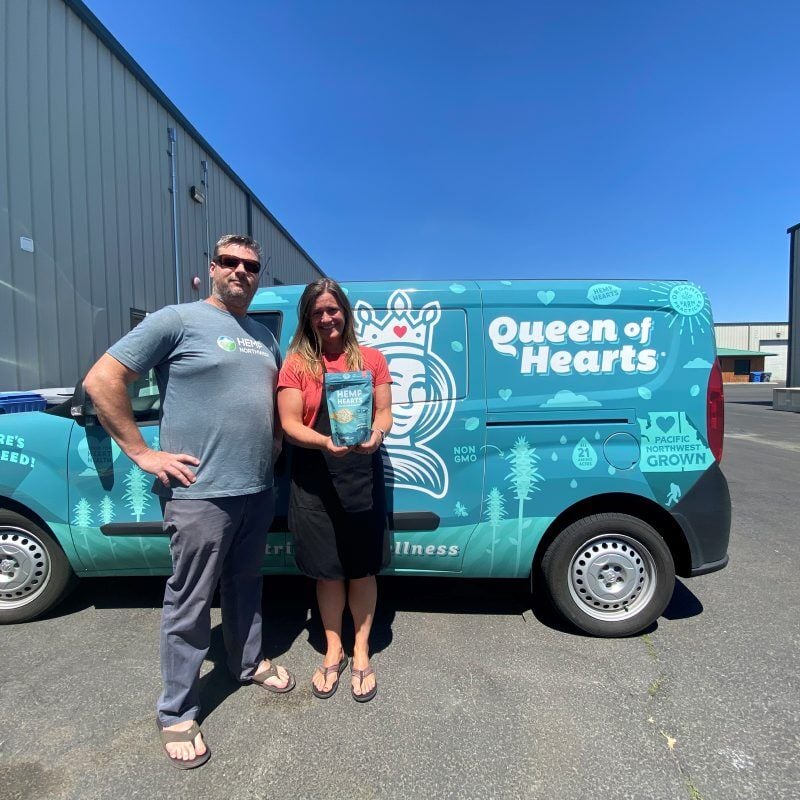 Gregg Gnecco and his wife, Tonia Farman, own and operate Queen of Hearts Hemp, a craft food business, and Hemp Northwest, a hemp processing company in The Dalles, Oregon. Listen to their podcast interview at bit.ly/LFpodcast147. 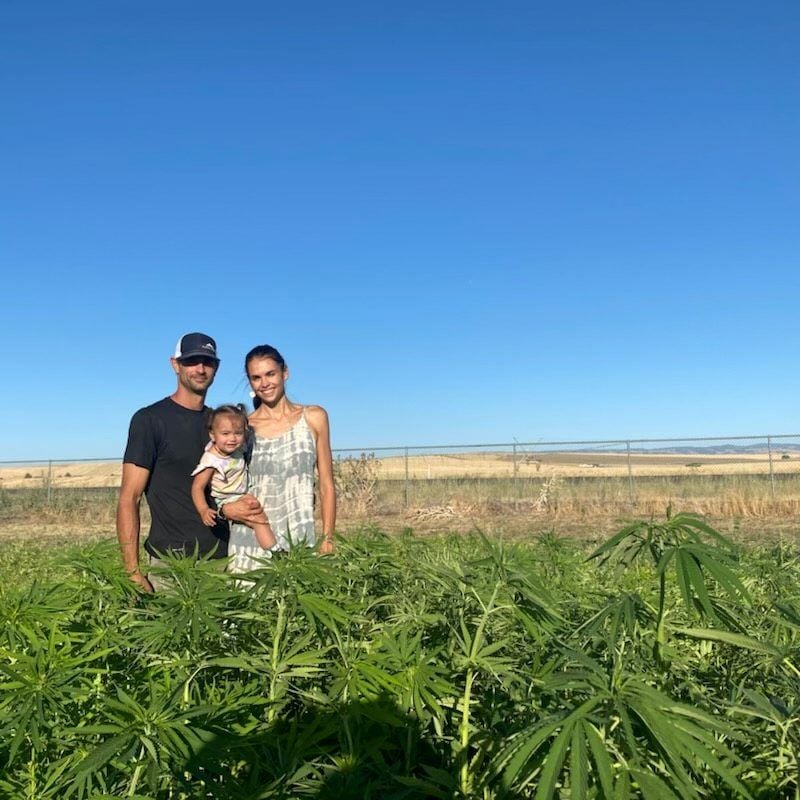 John Green, Marissa Baumgartner and daughter Walulah. Green and Baumgartner are milling the wood for a timber-frame hempcrete house and growing a few acres of fiber hemp on the edge of Marissa's family's ancestral lands of the Umatilla people.

This morning I am sitting by the banks of the Missouri River in Fort Benton, Montana.

I am watching a handful of deer make their way upstream along the far side of the river as it flows, swift and steady, along the edge of town. The sun is up but retains the reddish glow of sunrise in the haze of wildfire smoke.

The drive to Montana from eastern Washington brought us much closer to the fires.

In Colorado and California we could see smoke plumes on the horizon, but from Route 15 in Montana, we were close enough to see the hellish glow of flames in the mountains along the highway.

After a short break in the Pacific Northwest, we picked up the hemp trail again in northern Oregon along the Columbia River.

Our tour guide for the day was Gregg Gnecco. He’s the brand manager for IND HEMP in Montana, but he and his wife, Tonia Farman, own and operate Queen of Hearts Hemp, a craft food business, and Hemp Northwest, a hemp processing company in The Dalles, Oregon.

We parked Dolly the RV in Hood River. My wife and kids and I climbed into Gregg’s car, and he took us up to a snow-capped volcano called Mount Hood.

We hiked to the edge of the glacier and had a family snowball fight in July. The next morning at the RV park along the Columbia, I cooked a fresh-caught filet of Pacific salmon on the camp stove for breakfast.

After interviewing Gregg and Tonia for the podcast we continued east on Route 84 to a little old sawmill outside Adams, Oregon, where John Green and his wife, Marissa Baumgartner, are growing several test plots of hemp and milling lumber for a hempcrete timber frame house they intend to build on the edge of Marissa’s family’s tribal land, the Umatilla Indian Reservation.

Hemp is illegal to grow on the reservation because the elders of the tribe have misconstrued hemp as marijuana.

John and Marissa hope to show the tribe that hemp has the potential to revitalize the community and bring regenerative farming practices to the depleted farmland of the reservation.

We headed north to Washington and made a quick stop at a 30-acre hemp grain stand just outside Walla Walla. Thirty acres of hemp sounds big, but the dark green crop looked small among the thousands of acres of wheat and garbanzo beans surrounding it.

As we pushed on through the Palouse of eastern Washington, we saw wheat fields as far as the eye could see — yellow rolling hills, grooved and contoured by fleets of combines and tractors.

The roads were anything but straight, and there were grain elevators and semi trucks hauling grain around every twist and turn.

Eventually we made our way through Idaho and into the mountains of western Montana, stopping for the night in Missoula.

We found a barbecue place called the Notorious P.I.G., and as soon as we sat down, a young man and his wife approached us and asked if we were with the “Lancaster Farmer.”

I love when our readers call the paper the Lancaster Farmer, and to hear those words come from a total stranger in Missoula, Montana, was absolutely the best thing I could have heard at that moment. It was like we were home for that split second.

He is from a farm in Berks County, Pennsylvania, where his parents still live and farm. He grew up reading the paper, and when he saw the Lancaster Farming logo on the back of the RV parked out front, he was compelled to say hi.

I told him a little bit about our road trip, and gave him a hat and a copy of the paper. And then my family feasted on barbecue and brisket.

From Missoula we carved our way northeast to Fort Benton, home of hemp tour sponsor and podcast sponsor IND HEMP.

The town of Fort Benton is the archetypal Western town with wide, dusty streets, old saloons, and a general back-in-time easiness and slowness.

You can tell the town is struggling the way a lot of rural towns are these days — shuttered stores on Front Street, rundown houses throughout the town.

But the folks at IND HEMP are breathing new life into Fort Benton. Their multimillion-dollar oilseed plant went online last year, and they are about to commission a giant hemp fiber processing plant on the edge of town.

In talking to locals, I’ve found there’s a persistent feeling of hope and excitement for the future of Fort Benton.

The oil and fiber plants here are vital components of building out the hemp supply chain. Montana farmers in this historic grain-growing region of the West now have a reason to add hemp to their rotations, and many of them already are.

Ken Elliot, president and owner of IND HEMP, knows that without the farmers there is no industry, which is why IND HEMP works with farmers on agronomics and education, and especially in writing fair contracts that make sense for farmers’ bottom lines.

The zenith of our National Hemp Tour was an event held yesterday (July 27).

Hemp industry folks from all over the country descended on the town for an all-day summit and working session, hosted by IND HEMP at the Fort Benton Agricultural Museum.

Sort of like fish in a barrel, all of these hemp industry people in one place was very exciting to me as a hemp podcaster in my effort to document the birth of an industry.

These were all fiber and grain people, from Texas, Idaho, Colorado, South Dakota, Kentucky, Mississippi and even Pennsylvania.

Brad Wenger from New Holland Ag was there, and so was Geoff Whaling from the National Hemp Association.

We took a bumpy bus ride out to two nearby hemp fields in the morning before the heat set in. The first field was a grain crop and was clearly suffering from the 100-year drought in progress here, with short, stunted plants.

The second field, a fiber crop, was under pivot irrigation and was tall and lush. Both fields were also under assault from an army of grasshoppers.

After the trip to the fields, everyone convened at the museum and split into two working groups — fiber folks on one side, grain folks on the other.

According to Morgan Elliot, IND HEMP co-founder and COO and also Ken’s daughter, the event was a chance for the industry to collaborate and get into the weeds a little bit, and to talk about the problems the industry faces and how to move forward.

I was the proverbial fly on the wall, and I heard much talk about unifying the messaging of the industry, and also separating the industry from the cannabinoid side of hemp.

The general consensus among fiber and grain folks is that the CBD industry and THC cannabis are a distraction from the real potential of hemp, which they see in food, building materials and the raw ingredients for an ag-based manufacturing model in the U.S.

There is real need for a reform of the testing protocols and policies surrounding hemp.

This is food and industrial material we’re talking about, not CBD or marijuana, and forcing these businesses to comply with cannabinoid regulations is misguided and potentially detrimental to the success of the industry, not to mention very expensive for farmers.

The conversations were intense and a bit overwhelming. I am still processing all that I heard. But what is very clear to me is the camaraderie among the fiber and grain people.

They have shared interests and goals, and while some of these companies would be competitors in any other industry, here in the early days of industrial hemp, they know their individual success depends on the success of the whole.

After the working session, there were tours of the oil and fiber plants, culminating in a casual banquet at the fiber plant.

After dinner, Brad from New Holland gave a presentation about New Holland’s commitment to hemp farmers and hemp education. I especially enjoyed when he gently schooled these Westerners on the correct way to pronounce Lancaster.

Speaking of Lancaster, it’s time to get back on the road. We’ve got three more stops to make on the tour over the next eight days. First to Rapid City, South Dakota, where a recording studio is being constructed from hempcrete; then to the University of Nebraska-Lincoln (which is in Lancaster County, Nebraska), where they’re making great strides in oilseed processing; and then finally to the Project PA Hemp Home in New Castle, Pennsylvania.

Lancaster Farming’s Eric Hurlock checks in from the National Hemp Tour and reflects on how people across the country are curious about industrial hemp.

An update from the road as the National Hemp Tour cruises through South Dakota and Nebraska and Eric Hurlock visits a recording studio made from hempcrete, Horizon Hemp Seeds and learns about the  Nebraskan hemp industry.