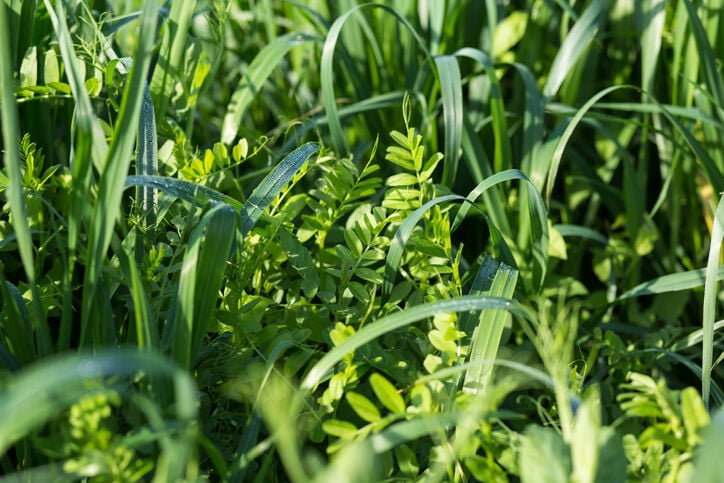 Using as covering crops vetch and oats. to improve the structure and fertility of the soil.

Soil might be a farmer’s most valuable resource, and a new plan will envision how Pennsylvania can improve the quality and productivity of its farmland.

“How can we get more people passionate about adopting these practices?” said Sara Nicholas, the policy specialist at Pasa Sustainable Agriculture who is spearheading the project.

On Monday, Nicholas presented the roadmap publicly for the first time during a panel discussion in Pasa’s virtual annual conference. The final report will be released in March after feedback gathered during the conference is reviewed.

The concept of soil health has been gaining in popularity among farmers in recent years. Strategies such as no-tilling and cover cropping can increase farm productivity, enhance biological activity in the soil, and strengthen the land’s resilience against erosion and drought.

Those are obvious boons to farms’ long-term profitability and ability to mitigate climate change — the kinds of things that farm groups and policymakers might want to encourage.

“I often think that it’s easier to tweak an existing program than to create a brand new one,” Nicholas said.

To that end, the roadmap suggests adding soil health requirements for owners of preserved farmland, involving soil health practices in flood mitigation programs, working with President Joe Biden’s planned Civilian Climate Corps, and getting funding from the Department of Homeland Security on the basis that soil health contributes to food security.

Pasa has already asked the state to fund soil health programs out of revenue from the Regional Greenhouse Gas Initiative.

That’s a carbon dioxide cap-and-trade program for the Northeastern states to which Gov. Tom Wolf is adding Pennsylvania.

Funding from the greenhouse gas program makes sense, Nicholas said, because healthy soils mitigate climate change. She’s not too optimistic that the state will take up the proposal, but “we figure if we’re not in the ballgame, then the chance is zero,” she said.

The most animating soil health question for Nicholas’ fellow panelists was how to increase the use of cover crops.

Pennsylvania’s cover crop acreage grew 33% between 2012 and 2017, according to USDA, but there’s still plenty of room for growth. The state has three times as much land in no-till as it does in cover crops.

Dean James, a board member of the Pennsylvania No-Till Alliance, said he thinks the state may be able to get 55 to 60% of its fields in winter cover crops.

Pasa and the alliance are both part of the Pennsylvania Soil Health Coalition, which is collaborating on the roadmap.

Expanding cover cropping should be particularly achievable after corn silage acreage. The cash crop comes off early in the fall, allowing plenty of time for the cover to get established, said Lisa Blazure, the soil health coordinator at Stroud Water Research Center, another coalition member.

“Our challenge is going to be a little bit more with those northern counties that have a little bit colder climate and winter comes a little sooner,” Blazure said.

Farmers may need to make adjustments to their cash crop strategies to allow time for cover crops to get established.

“We cut our soybean maturity way, way back, and we’re harvesting better beans than we have, you know, within the past 20 years,” said James, the farm manager at Cotner Farms in Danville.

In a 2020 USDA survey, farmers who don’t use cover crops said the most likely goads to get them to start were financial incentives and farm tours.

Maryland has increased cover crop usage by paying farmers $40 per acre to plant them. Some Midwestern states are working with federal authorities to offer crop insurance rebates if farmers use cover crops.

Pennsylvania should be proud of the amount of cover crop use accomplished in the state without regulations, but some incentives could make sense to help hesitant farmers get accustomed to the practice, Blazure said.

James worried that some farmers may participate in Maryland’s program for the financial benefit without being committed to improving soil quality. These farmers will need to be won over by evidence that cover crops improve farm productivity, he said.

Nicholas agreed that cover crop use should grow from landowners’ motivation and make sense for the operation.

“It will take money, but I don’t think money is the only answer,” she said.

As climate change heightens the risk of soil compaction, grain farmers will need to focus on building the resilience of their fields.

Farmers would benefit from joining the Regional Greenhouse Gas Initiative, according to the executive director of Pasa Sustainable Agriculture.