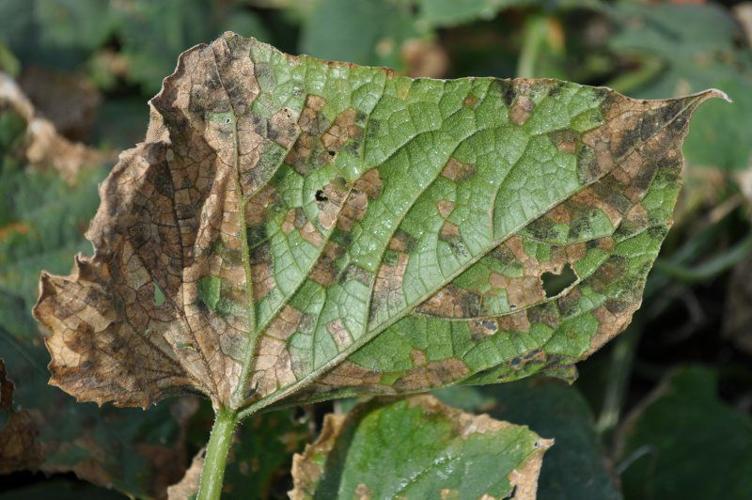 Downy mildew spores form on the lower surface of a cucumber leaf. The disease is one of many that has taken off during this summer's wet weather. 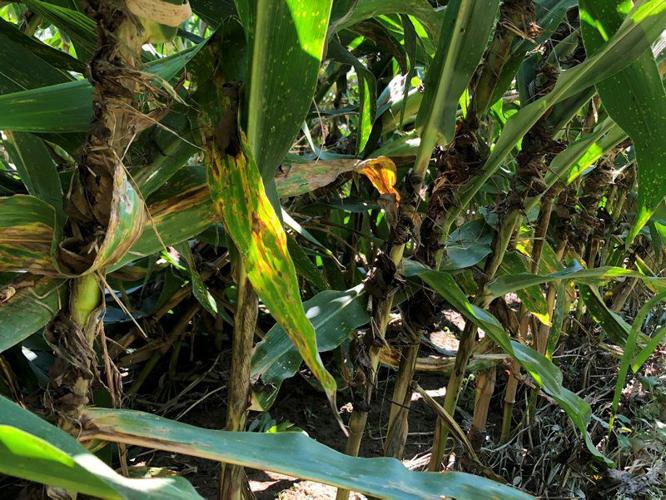 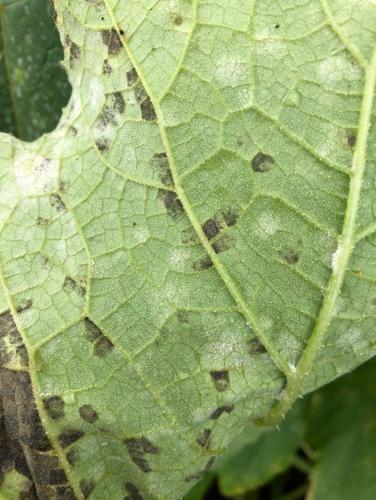 The underside of a pumpkin leaf hosts both downy and powdery mildew. Vegetable diseases have thrived in this year's wet weather.

Downy mildew spores form on the lower surface of a cucumber leaf. The disease is one of many that has taken off during this summer's wet weather.

The underside of a pumpkin leaf hosts both downy and powdery mildew. Vegetable diseases have thrived in this year's wet weather.

There’s still plenty of good produce out there, but moisture-loving diseases and flooding have made this summer anything but easy for growers.

Early blight, septoria, bacterial spot and bacterial speck have prospered since then because of frequent rains splashing them onto leaves.

Root rots and phytophthora blight have thrived when waterlogged fields were slow to drain.

And cucurbit downy mildew, which shows up every year on cucumbers, has also hit its occasional hosts like butternut squash and pumpkins this year.

Erie County is about the only part of the state that hasn’t been soggy all summer.

“The rains they got up there seemed to be much more periodic and when they were needed,” Gugino said.

With all of the rain, growers have struggled to get into their fields and keep up with their fungicide spray programs.

Even in some fields that were on good spray schedules, downy mildew crept in just because conditions were so favorable, Gugino said.

At Larry O’Malia’s Farm & Greenhouses on the north side of Wilkes-Barre, the swollen Susquehanna River caused the greatest damage.

Farm workers picked as many peppers as they could before a mid-August flood ended the harvest.

The farm, which didn’t return a request for comment Wednesday, will sell produce bought from other farmers through the end of October, according to its Facebook page.

Growers along the Susquehanna’s tributaries have also lost crops from sweet corn to pumpkins when heavy rains caused the streams to flood.

Recently, parts of Columbia County got 6 to 8 inches of rain in one day.

“It’s not a disaster, but for those people that are along the creeks, it’s been a tough year,” said John Esslinger, a Penn State Extension educator serving northeastern Pennsylvania.

Esslinger was hoping fields that did not flood would be protected by good spray programs, and in some cases that has happened.

But about three weeks ago, phytophthora flared up in fields with a history of the disease. It infects many crops but is worst on pumpkins, melons, squash and peppers.

The season is far from a wash, though. Many farms on higher, well drained land have nice crops this year.

In a dry year, those farmers might be wishing they had the lower-lying ground, Esslinger said.

Like Columbia County, the Lancaster area has been walloped by storms this year.

An Aug. 31 downpour dumped up to 10 inches of rain in four hours, LNP Media Group reported.

To make matters worse, a new strain of late blight was found in New York state this summer.

This new genotype, US-25, is not vulnerable to mefenoxam products like Ridomil.

Those chemicals are effective against US-23, the predominant strain for the past five years or so.

It’s not yet known if the new strain prefers tomatoes or potatoes, Gugino said.

Growers may continue to see the disease as the weather gets cooler. Gugino is interested in receiving samples of suspected late blight infection.

While ponding on the soil surface is bad enough for the plant, flood waters bring the additional risk of contamination from human pathogens and toxic chemicals.

If the edible part of the plant has been exposed to flood waters, it cannot be sold.

Plants that were near the flood water or that keep the edible portion above ground — think sweet corn or tomatoes — should be evaluated case by case.

The Produce Safety Alliance recommends marking the high-water line and leaving a 30-foot buffer between the flooded areas and fields to be harvested.

The buffer allows space for equipment to turn around without coming in contact with contaminated ground.

Farmers can replant after 60 days if the flood waters carried no known or suspected contaminants, but it’s awfully late in the season to start a new crop now.

If workers need to access a field that flooded, they should wear protective clothing.

And if the farm’s well head was submerged, a water test is in order, the alliance says.

Growers whose fields have flooded should contact their crop insurance agent or Farm Service Agency office for information about possible assistance.

Vegetable producers can also make changes to reduce the spread of wet-weather diseases in the future.

Growers should think about how runoff travels across the farm.

If the water can be diverted away from fields instead of running from one planting to another, growers can reduce the spread of soilborne pathogens, Gugino said.

Using mulch can also keep pumpkins and squash from direct contact with the soil, she said.