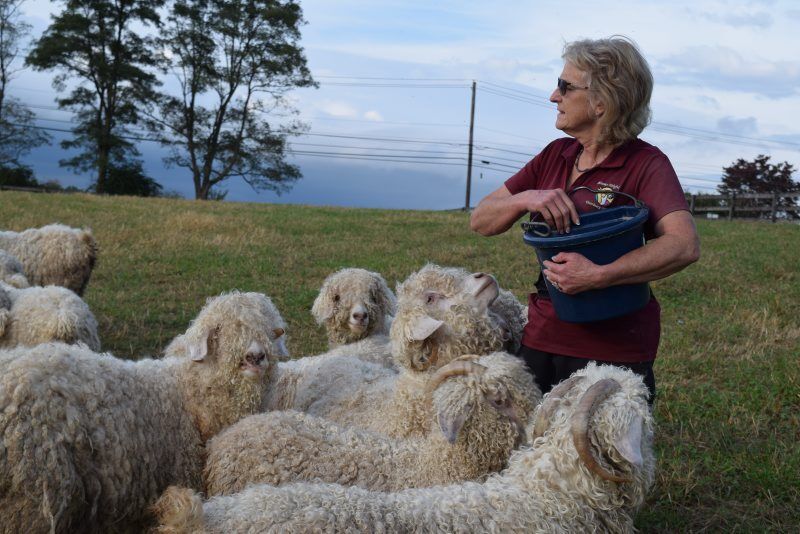 Dr. Judith Shoemaker brings a little feed to her Angora goats in Little Britain Township, Lancaster County, Pa. Shoemaker, who also has a vet practice on site, is fighting to get the township to classify her land as a farm. 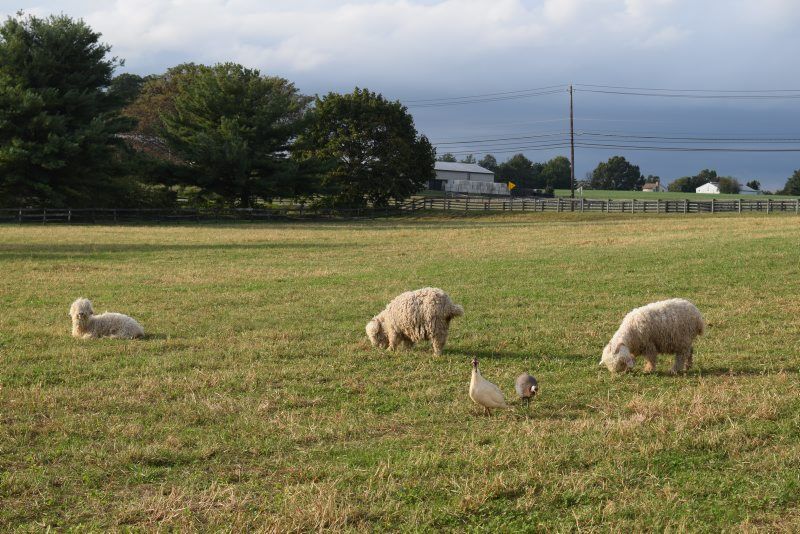 A few Angora goats, and two guineas, occupy a pasture on Dr. Judith Shoemaker's property. Shoemaker says the township has required her to keep a needlessly low stocking rate because her property is less than 20 acres.

There are barns, fences and Angora goats on pasture.

But at 16.4 acres, her parcel is too small to meet Little Britain Township’s definition of a farm.

As a result, Shoemaker said, the township has confined her to low stocking rates that make pasture management difficult.

More broadly, she said, the township has infringed her right to farm by creating local regulations that are too strict.

So Shoemaker — who also runs a mixed veterinary practice in the lower level of a bank barn on her property — has mounted legal challenges to defend not just her farm, but a way of life in Pennsylvania’s ag industry.

“Most people would say, oh well then, just give me the relief that you want to have and be done with it,” Shoemaker said. “I’ll take it to the limit because this is for other small farmers.”

Little Britain — a rural township in Lancaster County, the state’s top ag producer —might seem an unlikely municipality to be putting onerous burdens on agriculture.

“From its inception, Little Britain was a strong agricultural community, a tradition which still holds true today,” the township’s website reads.

Nonetheless, the conflict begins with the township’s definition of a farm — 20 acres at minimum. Properties smaller than that face special rules for the keeping of livestock.

State regulations, meanwhile, generally use a 10-acre minimum, which would allow Shoemaker’s property to be classified as a farm, said her attorney, Susan Bucknum.

One of those state statutes — the Agriculture, Communities and Rural Environment law of 2005 — says that local ordinances cannot regulate normal agricultural activities more strictly than the state does.

The law was created to reduce farmers’ risk of costly legal battles with local governments and to bring clarity to nutrient management regulations.

Under ACRE, a farmer who believes an ordinance crosses the line can ask the attorney general’s office to review it.

If it finds the ordinance is unauthorized, the office will bear the cost of getting the township to rewrite the rule.

In 2017, Shoemaker filed an ACRE complaint against Little Britain, but the attorney general’s office declined to intervene.

The denial didn’t make sense to Bucknum. In a request to reconsider filed last year, she cited 11 ACRE cases where the attorney general’s office had taken issue with farm minimum-acreage ordinances — including one, at 15 acres, that was lower than Little Britain’s limit.

Bucknum, it bears noting, developed the ACRE program during her nearly 10 years as a senior deputy attorney general.

The state Ag Department has urged the attorney general’s office to thoroughly review the request to reconsider, and Pennsylvania Farm Bureau has asked for at least a reason why her petition was denied.

The attorney general’s office did not respond to a request for comment about the case.

When Shoemaker first brought the complaint, Little Britain emphasized to the attorney general’s office that the property was zoned rural residential, not agricultural.

In her 2019 letter, Bucknum said the distinction between the two zones is unimportant. If a zone allows ag, it has to allow normal ag operations as laid out in state law, she said.

Where townships are allowed to draw the line on farm size could have big ramifications in Pennsylvania. Half of the state’s farms are under 50 acres, according to USDA.

The size of the property is a sticking point in part because Little Britain limits the amount of livestock that can be kept on parcels less than 20 acres.

The township’s quotas are based on three size classes of animals — less than 15 pounds, 15 to 200 pounds, and greater than 200 pounds.

Under this rubric, the township said it had expanded Shoemaker’s stocking rights in a 2017 zoning decision and permitted her more animals than the ordinance allows.

AEUs are calculated using the average number and weight for each type of animal.

By this measure, Bucknum argued, the township’s 2017 decision actually reduced the already-low cap on her stocking rates, putting her at just one-fifth of what the state allows.

At those numbers, Shoemaker said she doesn’t have enough goats for proper rotational grazing. Last year she cut hay to manage the excess forage, but she’d rather not do that because machinery damages the fragile tract.

“The goats are the highest and best use of this land. The goats don’t compact the soils,” Shoemaker said.

With partner Glen Cauffman, who has a farm in Perry County, Shoemaker raises Angora goats for their fine-grade mohair fiber.

Her farm houses many of the older goats that are still good fiber producers but, in Cauffman’s larger herd, can have trouble competing for food with the younger animals.

While she waits for the agency’s response to her second request, Shoemaker is raising both concerns in a lawsuit against the township in Commonwealth Court.

She is asking the court to invalidate the contested sections of the ordinance and pay her court costs.

In the meantime, Shoemaker sought yet another common farm protection — the inclusion of her property in the township’s agricultural security area.

“It’s not a zoning proceeding, and it’s not discretionary,” Bucknum said. “It’s like, you look at these factors. Do they satisfy these factors? And that’s the inquiry to be made.”

In short, if the farm meets the criteria, it has to be approved.

The Little Britain supervisors approved the farm’s ag security application on Sept. 29, but for Shoemaker and Bucknum, the victory rang a bit hollow.

At a previous meeting, Bucknum had laid out a meticulous argument based on the state criteria, citing soil maps, the regional comprehensive plan and U.S. Census of Agriculture data.

But when the time came for the supervisors to discuss approving the application at the late-September meeting, they spoke mainly about their feelings, not Bucknum’s specifics.

Supervisor Pat Wood said she believed only properties zoned agricultural should be in the ag security area. She moved to approve the farm anyway because the rules say zoning is not a consideration.

“I felt as though our hands are tied,” she said.

Chairman Jerry Emling, the only supervisor to vote against approving the farm, had similar concerns about a parcel zoned rural residential with a vet practice and livestock production on it.

“It’s zoned one way, it’s used for basically a business, and now also for agriculture,” he said.

The three other supervisors did not offer public comments on their votes during the meeting.

The supervisors may have had little to say because much of the legwork for the vote was done before the public meeting.

The law requires agencies to deliberate their business at a public meeting with an opportunity for public comment before official action is taken.

When there’s little to no public deliberation, the public has limited ability to understand the issue and provide meaningful input.

“It cuts the public out of the decision-making process in conflict with the plain letter and intent of the Sunshine Act,” Melewsky said.

Even with her approval for the ag security area, Shoemaker is looking toward her bigger goal — nailing down a victory for the rights of small farms.

“The ag industry is one of the No. 1 industries in the state, and we’re not going to be able to keep that if municipalities can regulate small farms out of existence,” Bucknum said.