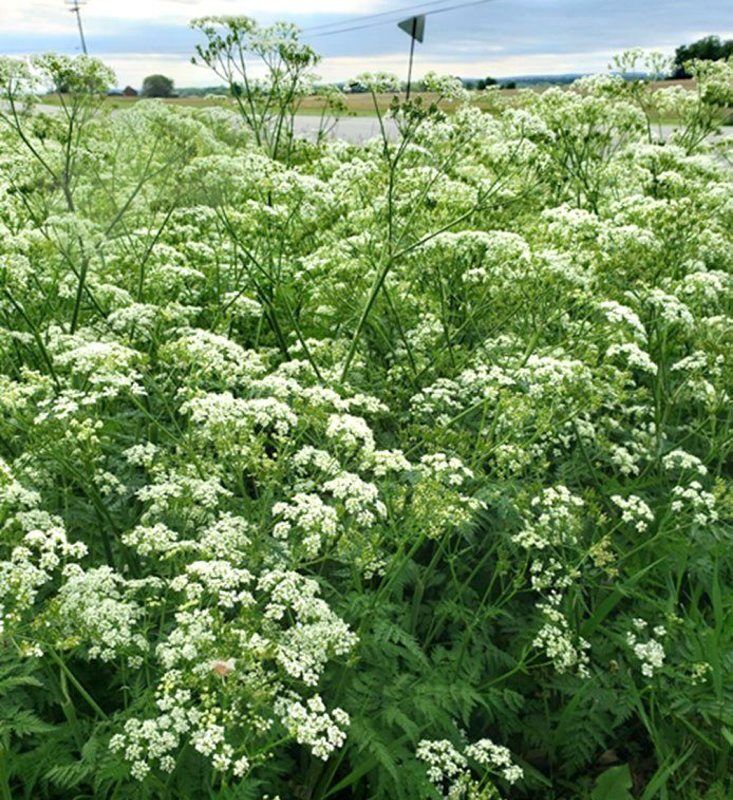 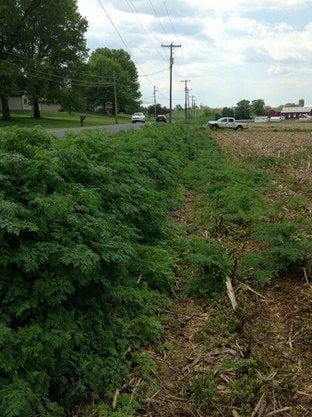 Poison hemlock grows along a roadside in Lancaster County, Pa. 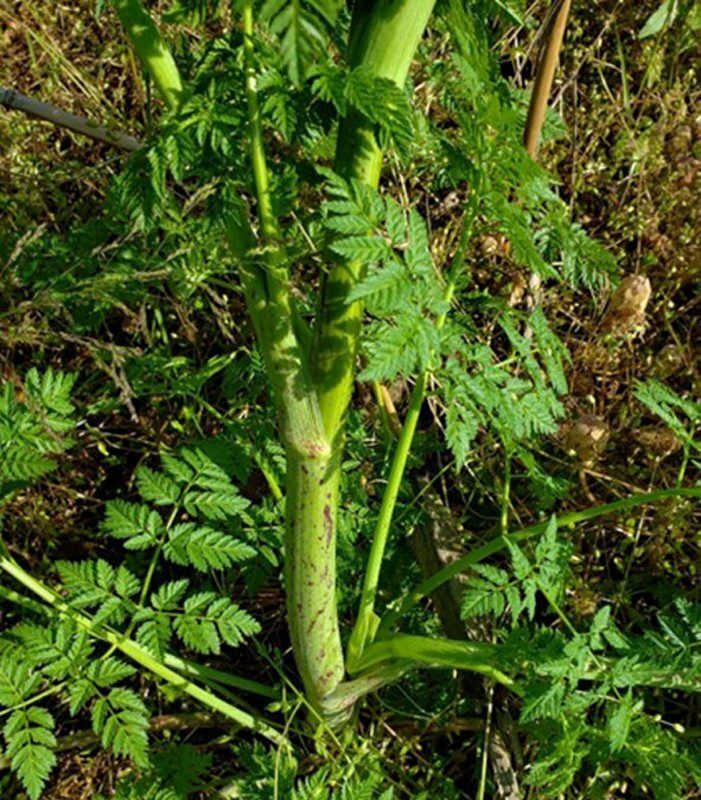 A poison hemlock plant in the vegetative stage shows purple blotches on the main stem.

Now is the time to identify and destroy poison hemlock.

Horse and livestock owners should be on the lookout for poison hemlock, an invasive weed spreading across the state. Grazing cattle have been lost this spring and summer because they consumed this weed.

Agronomy educator Jeffrey Graybill explains poison hemlock is a biannual weed of the Umbelliferae family (parsley), which can grow up to 6 feet tall and has a smooth, hollow stem.

The weed can easily be identified by the purple spots on its stems and by its finely divided leaves that resemble wild carrot (Queen Anne’s lace).

Poison hemlock has a musty smell, while the leaves often give off a unique parsley smell when they are crushed.

This video shows how to identify poison hemlock: extension.psu.edu/poison-hemlock-identification

This weed has been expanding to new regions in the state, and its growth has become increasingly aggressive. The weed can be found growing in fallow areas, fence rows, pastures, roadsides and creeksides.

It is native to Europe, northern Africa, and western Asia and was introduced to North America as an ornamental garden plant.

It is infamous as a poisonous plant; hemlock tea reportedly killed the Greek philosopher Socrates in 399 B.C.

The plant contains a number of closely related pyridine alkaloids with the main one being coniine, a colorless, volatile and strongly alkaline oil.

All parts of the plant are poisonous, and some studies have shown toxicosis with consumption of 0.25% fresh weight (of the animal’s weight) for horses and 0.5% for cattle. This would be 2.5 to 5 pounds of fresh material per 1,000 pounds of animal.

Mature seeds are the most poisonous. Significant poisoning can result in muscle paralysis and suffocation.

As a biannual, poison hemlock’s seeds typically germinate in late summer through autumn. A small rosette forms and grows vegetatively. It may remain green throughout much of the winter.

In early spring the rosettes quickly green up and begin aggressively growing. In late May the plant will bolt, shooting a single large stalk with small white flowers.

After flowering the seed plant will die, scattering new seed, which will germinate and produce new plants as fall approaches.

Identification and eradication of this plant wherever livestock could come in contact with it is important.

Carefully walk hay fields and meadows that will be harvested, eradicating hemlock prior to any harvest.

Hemlock’s toxicity can remain when harvested with dry hay or baleage; therefore, do not feed contaminated hay.

When eradicating the plant, wear gloves and protective clothing. Contact with the skin has been known to cause irritation for some people.

You can easily dig individual plants out using a shovel. For larger infestations, several herbicides are effective for control.

Applications are most effective when made before plants bolt in the spring. Preferred herbicides include 2,4-D plus Banvel, Crossbow (2,4-D plus triclopyr), or glyphosate as a spot treatment.

Poison hemlock is spreading through Pennsylvania: How can you spot it and remove safely?

A feathery-leafed plant that’s spreading across Pennsylvania isn’t a wildflower but a poisonous weed that can kill.

Conditions have been ideal this year for growing sweet corn, but farmers are on guard against the threat of pests and fungus.

Opinion: Scholars Weigh in on Glyphosate

Is glyphosate safe? Researchers are still debating its health effects, but many agree that research into alternative weedkillers should be accelerated.

The aim of the project is to help increase value of West Virginia cattle by improving cattle vigor prior to entering production channels.

Is Leptospirosis a Summertime Threat to Livestock?

Leptospira bacteria is more commonly active during the late summer and fall. Here’s how to prevent and manage leptospirosis in livestock.