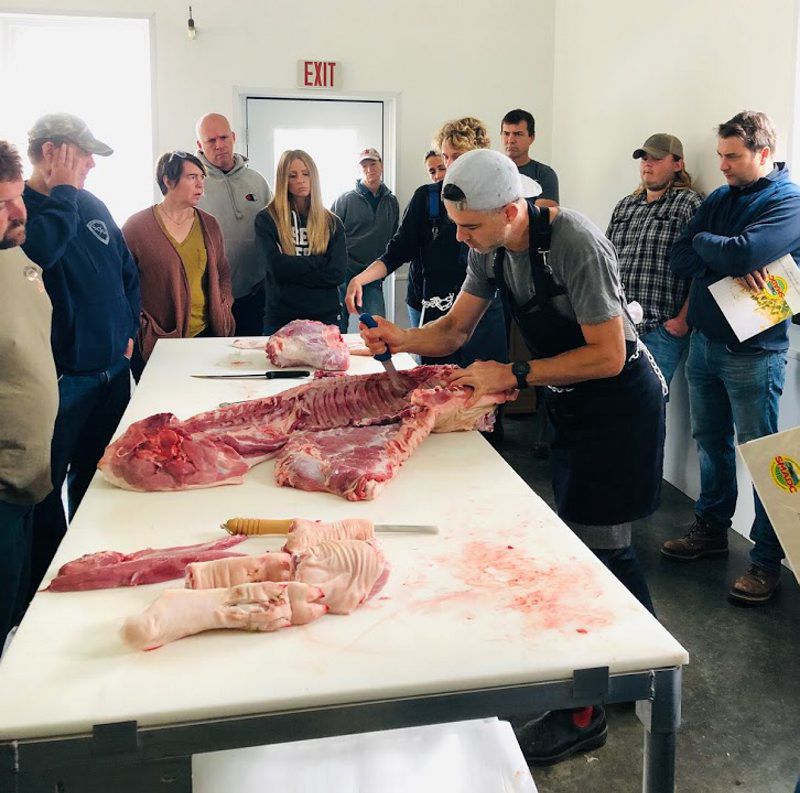 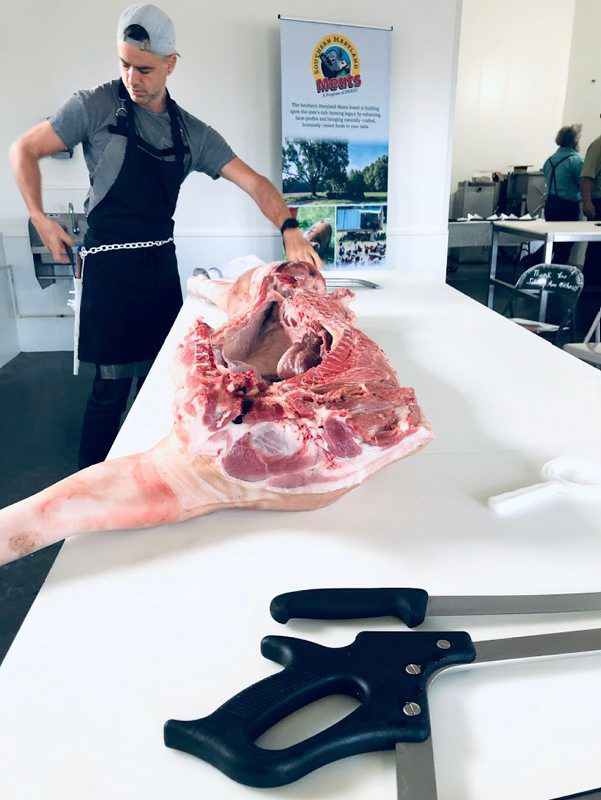 Adam Danforth sharpens his tools and readies the table before giving a demonstration at a butchery workshop held in southern Maryland. 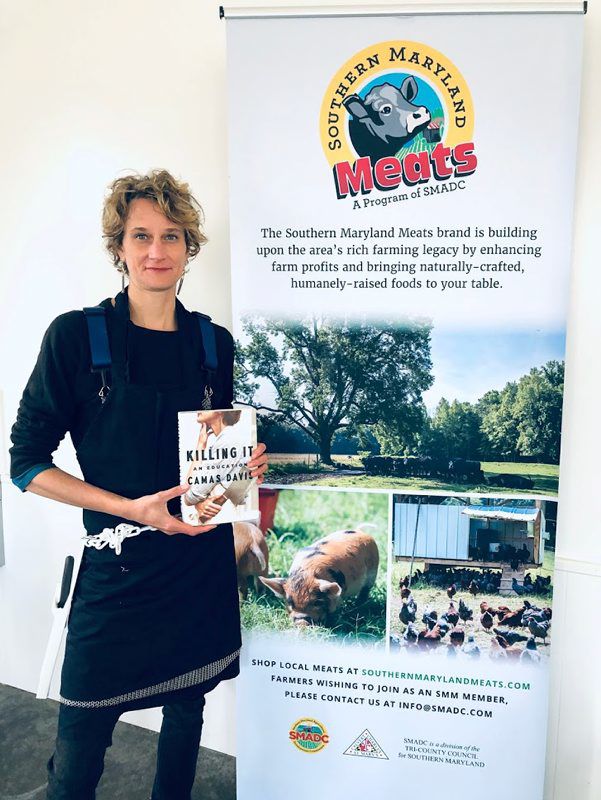 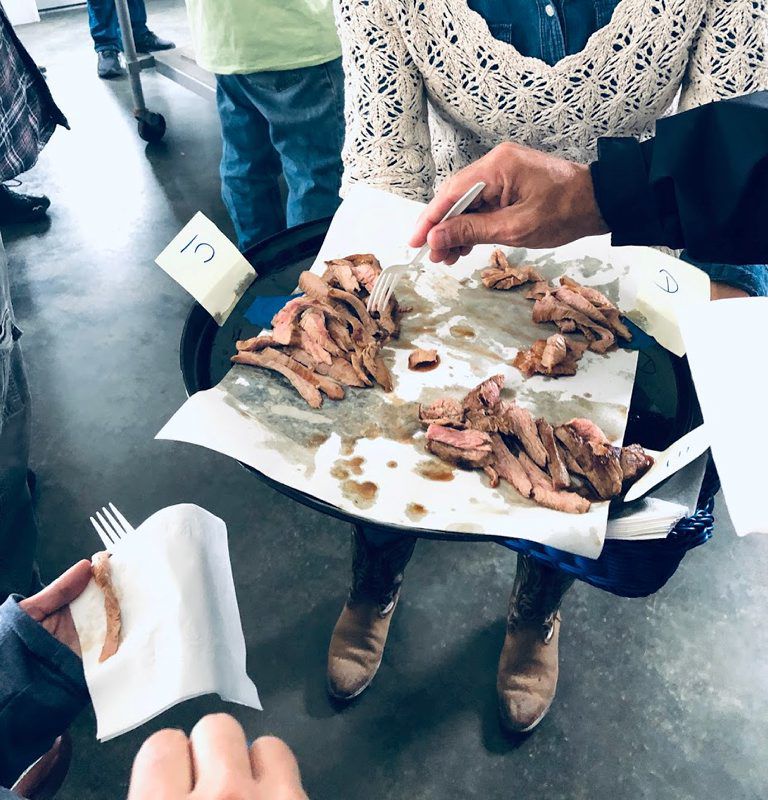 The farmers in attendance sample the cuts of meat. 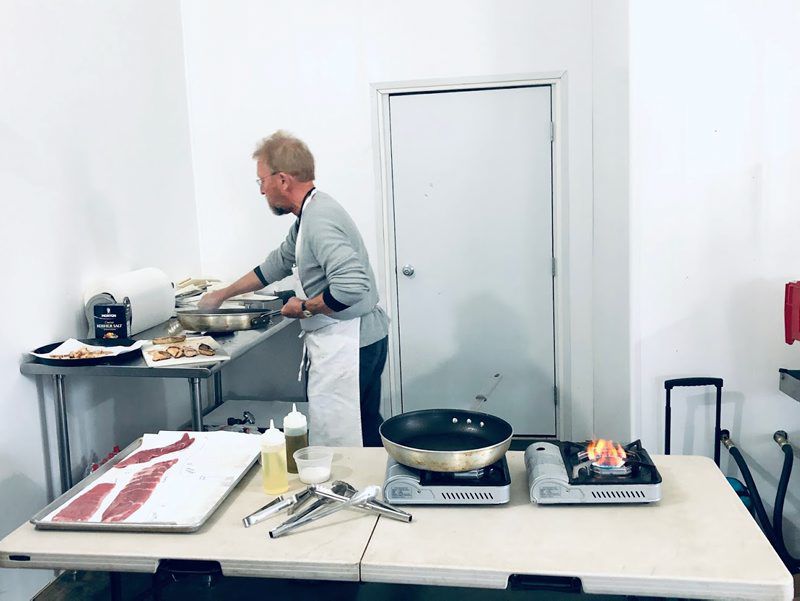 Craig Sewell, a chef in his previous career, cooks the cuts for tasting.

Adam Danforth sharpens his tools and readies the table before giving a demonstration at a butchery workshop held in southern Maryland.

The farmers in attendance sample the cuts of meat.

Craig Sewell, a chef in his previous career, cooks the cuts for tasting.

MECHANICSVILLE, Md. — From farm life to foodie culture, meat has become a movement.

Southern Maryland is now on the cutting edge of that movement. It began almost a decade ago with farmers diversifying their farms, researching quality stock and investing in their herds. It progressed with the buy local initiative, and has been ushered through to today by the farmers and their colleagues at the Southern Maryland Agricultural Development Commission and the commission’s growing Southern Maryland Meats program.

Danforth and Davis, of The Good Meat Project and The Portland Meat Collective, are leaders in the revitalization of local meat production and meat processing that is growing throughout the U.S.

Their southern Maryland workshop was organized by SMADC and hosted at the newly constructed Westham Butcher Shop.

The goal of the workshop was to walk farmers through a typical pork cut sheet and explore the many ways that various carcass cuts might be utilized in retail, restaurant and home settings. Marketing and promotion were also listed on the agenda as a way to explore how producers could tell the story of each of the meat cuts to customers, using the appealing language of flavor and texture to boost sales.

The event was planned as a full day workshop for Oct. 9 and was organized into two sessions, a pig butchery demonstration with tastings in the morning, and a hands-on pig butchery workshop in the afternoon.

Both sessions sold out quickly, and due to demand, a second hands-on butchery session with Danforth was scheduled for the following day as well.

On the first day, the workshop attendees, a diverse group of those from older local farm families and new and beginning farmers, gathered around the butchery table to watch Davis and Danforth work. The whole pig butchery demo, done that day with a young Berkshire, was part anatomy lesson, part cooking class, and part art; watching these experts create cuts was similar to watching an artist paint, masterfully done while looking effortless, all the while explaining the process.

Following the breakdown of the hog, a half dozen different cuts of meat were lightly seasoned with oil and salt and cooked over portable burners. Placed on a platter and circulated among the guests, they were offered as a blind tasting to see if participants could guess which muscle made which cut of meat, and discover how each cut holds great potential for positive flavor experiences for the eater, a key component to successfully marketing the whole animal.

After the tasting, all were primed for lunch, which was provided buffet style. The afternoon session followed with a hands-on butchery lessons for a smaller group of participants to practice what they had learned.

The participants were enthusiastic and engaged throughout the day, asking questions, taking notes, and comparing experiences from their time in the industry.

“The workshop was so much of an education in one of the last phases of true farm to table,” said Charles County farmer BJ Bowling. “I was able to learn more effectively how to take my local meats from the field to the fork.”

Amanda Hand of MKONO Farm, who provided one of the pigs for the workshop, said that “the workshop was amazing and everything that I had hoped it would be as a producer. Adam and Camas were wonderful teachers. It was amazing to see Adam do his magic on one of our homegrown pigs. I honestly was kinda star-struck. I appreciated his passion and love for the deep red and well marbled pork of our MKONO Farm KuneKune pigs and Glen Mary’s Farms Ossabaw breed as he explained all of the amazing dishes and uses of a pig from nose to tail.”

Craig Sewell, SMADC’s marketing and livestock manager, the impetus behind the workshop, said “Camas and Adam demonstrated a deep respect for animals with their exemplary butchery skills, and a deep knowledge of the growing industry of niche meat processing. It was an excellent kickoff event for SMADC’s multi year investment in southern Maryland’s livestock industry. An investment with the goal of creating a brand known nationally for excellence, sustainability and creativity.”