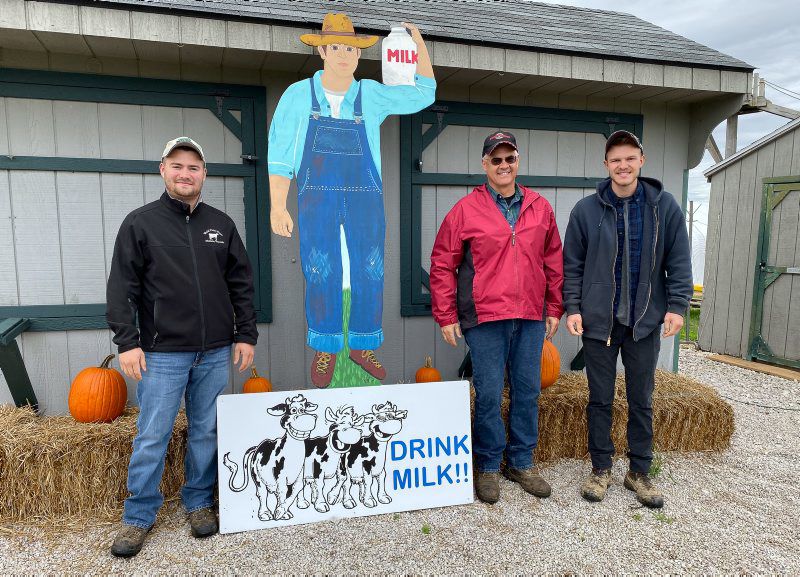 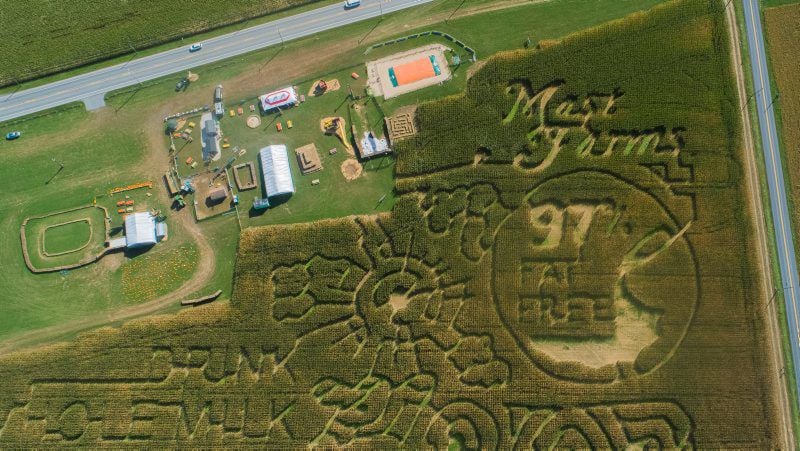 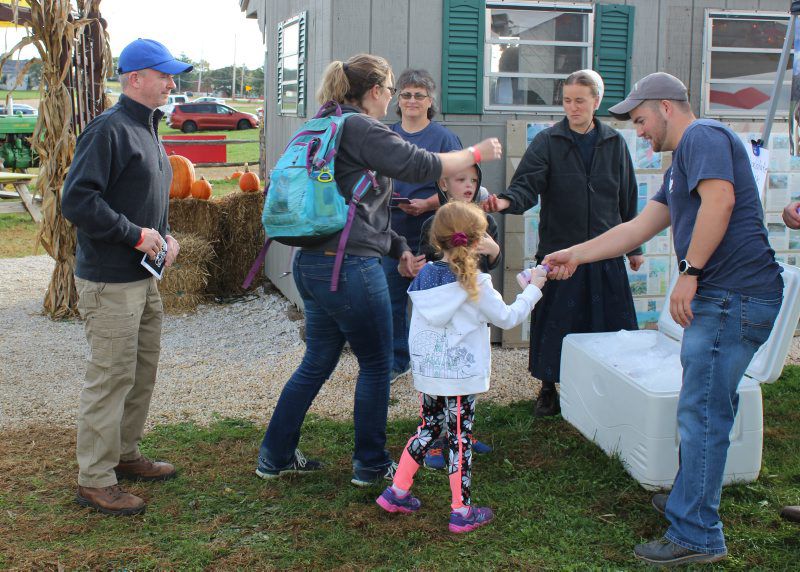 Mary Jane Leid and Jordan Zimmerman pass out chocolate milk at the corn maze on Oct. 12. 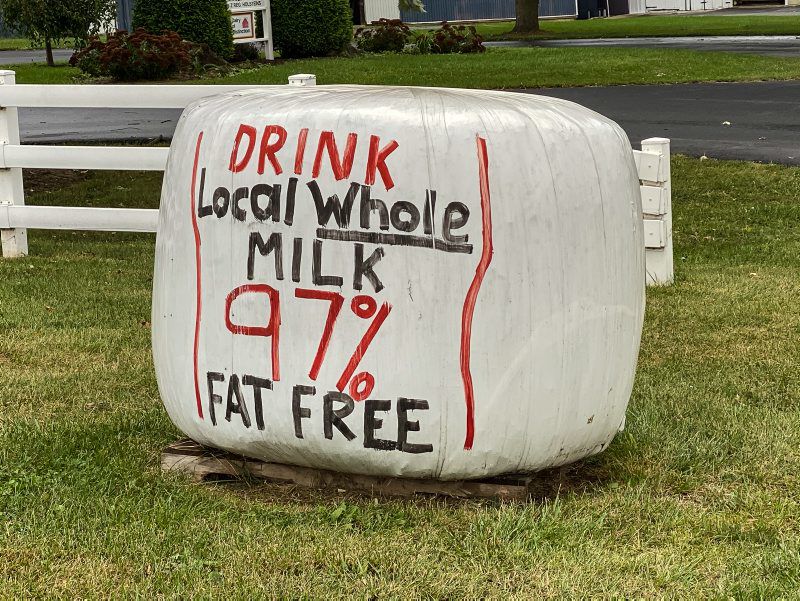 Mary Jane Leid and Jordan Zimmerman pass out chocolate milk at the corn maze on Oct. 12.

MORGANTOWN, Pa. — Mast Farms on Route 23 has been a fall family destination for two decades, with a pair of corn mazes and autumn harvest activities from hay wagon rides and animal exhibits to the little quirky potato slingshot and pedal tractors that children just love.

It’s familiar seasonal agritainment that many farms have adopted to add value to the operation and develop rapport with the public.

But this year has extra meaning.

The Mast family has designed its corn maze to support the local dairy industry in its promotion of the “Whole Milk is 97% Fat Free” hay baleboard campaign. The marketing effort, according to dairy farmer Jordan Zimmerman, has changed consumers’ perception that whole milk is high in fat.

Zimmerman is a fourth-generation dairyman who works with his father, Dale, owner of Zimhaven Farms in East Earl. He said people are noticing and it’s making a difference.

“Parents are now beginning to ask why they were buying 2% milk when whole milk itself is virtually fat free,” he said.

Zimmerman is a board member of a small Lancaster-Lebanon dairy marketing group called 97 Milk LLC (97milk.com) that’s working in support of regional and national efforts to reacquaint consumers of the benefits of whole milk. The group promoted the whole story at the Mast Corn Maze on Oct. 12 while handing out bottles of chocolate milk.

The Masts have been doing corn mazes since 2001, and each year have a different theme, like a tribute to Mr. and Mrs. Potato Head, sponsored by Herr Foods of Nottingham, known for its potato chips; and a baseball maze sponsored by the Philadelphia Phillies’ minor league team in Reading.

“It was a chance for us to support the dairy industry during a time when milk sales have seen a decline with the introduction of nondairy beverages like almond milk,” Mast said about this year’s theme. “We went through a similar period 20 years ago when potatoes — our big crop — saw a big drop in sales with the growth of the low carbohydrate diet craze.”

Mast hopes the partnership with the dairy farmers this year helps call attention to health benefits of whole milk produced by his dairy farm neighbors.

The first corn maze in the United States was created in 1993 in an Annville cornfield when theme park producer Don Frantz teamed up with English hedge maze designer Adrian Fisher to mirror British hedgerow garden mazes that dated to the 17th century.

In 1996, Brett Herbst, an ag businessman from Utah, read about the Annville maze and rounded up some college buddies to create one with a weed whacker. Soon, his farm friends were asking him to build mazes for them. Herbst started a company — The Maize — that, in a little more than 20 years, has become one of the nation’s busiest corn maze builders, making about 300 per year.

Herbst has worked with Mast Farms maze since the beginning.

Kamille Combs, spokeswoman for The Maize, explains corn mazes can be cut or grown. Most of today’s mazes, she explained, are growing. The company’s largest maze was 50 acres with an estimated million and a half seeds.

Mazes are built with the help of aerial photographs, maps and GPS technology. Herbst’s company employs 15 two-person teams during the summer. They travel around the country working with farmers to construct the mazes.

Mast’s two mazes total 13 acres and are planted in the spring with field corn seeds. The field is planted to form a grid and avoid long, open rows that would allow visitors to walk out of the field without following the trail. Maps are provided to visitors and there are guideposts along the way, so getting lost in the field is unlikely.

But Mast, shaking his head, said, “That didn’t stop some kids from calling 911 in the maze a year ago on an evening visit.” The local fire department wasn’t happy, he added.

The Mast farm is primarily a produce operation, growing potatoes, strawberries and pumpkins. Mast grows six varieties of pumpkins that are sold at local and regional farm markets.

“Nearly 20 years ago,” Mast said, “with people shying away from potatoes and sales down because of growth of low carbohydrate diets, we had some land close to Route 23 and we decided to put it to use with the corn maze and other farm-related entertainment attractions. It turned out to be a good idea.”

He said the maze is not a key part of the farm’s business plan, but it is a labor of love.

“It is very weather dependent,” he said. “Some years we just break even and other years we show a profit.”

Mast said he has welcomed as many as 1,500 guests on a perfect fall weather Saturday. In addition to the maze, activities include pumpkin painting, a pig barrel train ride, zip lines and a hay jump.

“We have visitors from the community and as far away as Virginia,” Mast said. “We are a relaxed, no line, fall destination. We actually have had parents tell us that we are a place where you can breathe.”